AEW Dark and Elevation: The Long and The Short 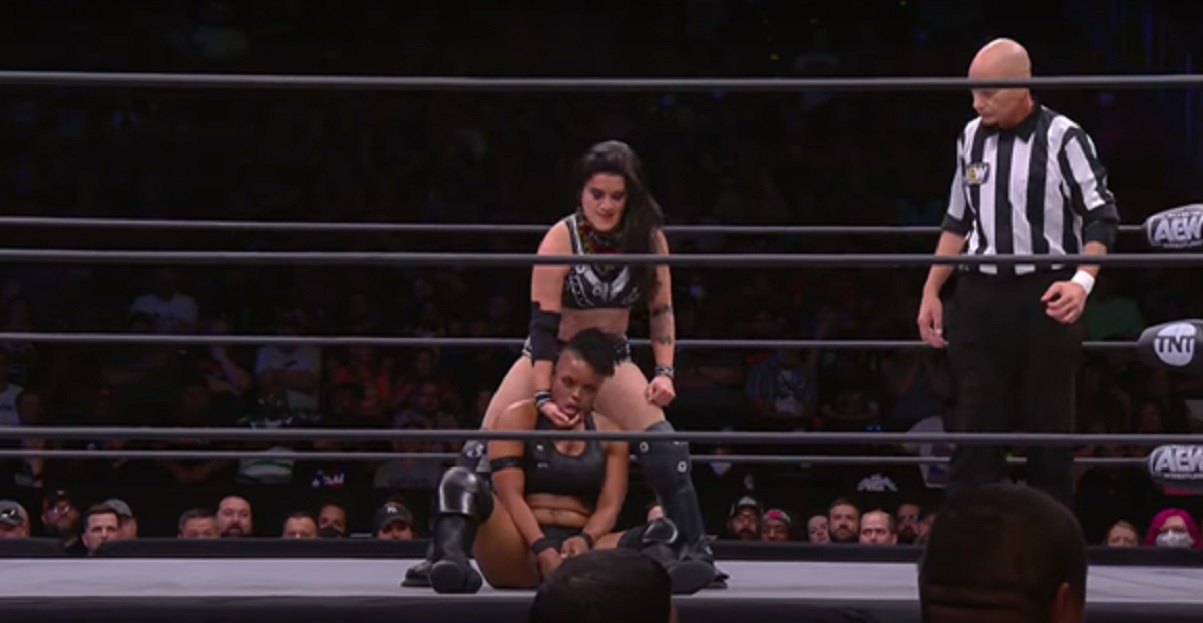 Konichiwa, wrestling fans and welcome to the AEW Dark Elevation and AEW Dark reviews for July 26th and 27th.

I’ll admit, when I saw the running time for Elevation, I got a little scared as it was over 2 hours but it was a fun two hours. Personally I still think the sweet spot for that show is anything up to about an hour and a half. Dark on the other hand was only 45 minutes and the easier watch. Both shows had fans in the stands which always makes these shows much more enjoyable.

From a wrestling perspective, I thought Big Swole vs Diamante from Dark was the best match out of both shows mainly because it drove some storyline between these two and the story isn’t over yet. I would also recommend Jungle Boy vs Marc Quen from Elevation which was a very athletic and competitive match. Aside from that, there were also some highlight performances such as Alan ‘5’ Angels who was the workhorse in his tag match against the Lucha Bros and Luther who wrestled arguably his best AEW match to date against Lee Johnson. And speaking of Lee Johnson, I’m happy to see him get the win in order to get a title shot at Miro during the Homecoming show next Wednesday. I’ve been touting this guy’s potential for awhile and I hope this is the start of his move up the card. Although, during this match, it looked like he legit landed on his head when hitting his finisher. I hope he’s OK. Finally, the women continue to impress and I want to see more of them on the big show!!

2. Yuka Sakazaki pinned Amber Nova after an airplane spin. Despite the loss, Nova got some offence in and looked good.

3. Thunder Rosa defeated Myka Madrid with the Peruvian necktie. Now that Rosa has signed, I really hope we see her on Dynamite more often.

4. Luchasaurus hit a spin kick to get the one handed pin on Jora Johl (w/ HFO).

5. Scorpio Sky got the pin over Fuego Del Sol after hitting a vicious looking TKO. Fuego may have arguably got the biggest pop of the night from the crowd.

6. Angelico made Marko Stunt tap to a modified torture rack. Anjelico has the chillest ring entrance. After the match, Anjelico stomped on Marko a few more times.

7. Recap of the rivalry between The Bunny and Kris Statlander which lead into a backstage interview with Bunny and Alex Marvez. She wants to rip Kris Statlander’s face off. This was a good psycho promo.

8. Kris Statlander and Tay Conti beat The Bunny and Madi Wrenkowski when Statlander hit the Big Bang Theory on Wrenkowski to get the pin. Eddie Kingston got an Animaniacs reference which my inner 13 year old appreciated.

9. Wardlow hit the rising knee to get the win by ref stoppage over Bear Bronson in a surprisingly competitive hoss match. Wardlow is a brute and has amazing potential but I’d like to see him tighten up his in-ring work a bit more. Before the match, Jake Hager joined the commentary team. After the match Hager and Wardlow had a stare down.

10. Alex Marvez with the winner of the Elite GM invitational who got to pick Lee Johnson’s opponent on Elevation and if Johnson wins he gets a title shot at Miro on August 4th. Luther is the opponent and this leads to….

11. Lee Johnson got the win over Luther after hitting a weird looking spinning splash for the win. Luther looked good in this match and I might argue this is the best match I’ve seen him in since he started in AEW. After the match, Miro came out and cut a promo.

12. Eddie Kingston hit a spinning backfist on Serpentico to get the victory.

13. Marc Sterling and Jade Cargill come to the ring and are looking for the next great partner for #JadeBrand. Jade looked great but this promo is getting stale and they need to move it forward soon.

14. Lucha Bros got the win over Alan ‘5’ Angels and 10 after hitting the Fear Factor/stomp combo on Angels for the pin. Both teams got good offence but kudos to Alan Angels who looked great during the match. And in case you don’t know this…Fenix is superhuman.

15. Billy Gunn, Colten Gunn and Brock Anderson got the victory over Chandler Hopkins, Cameron Cole and Izzy James when Colten hit the Colt 45 on James. Anderson is showing improvement every week.

16. In the main event, PAC beat Chuck Taylor after hitting a Black Arrow. I like both guys but I thought this match would have been better because both guys can go. It felt a little off. After the match, Andrade came out with Chavo Guerrero and…the other guy whos is yet unnamed. They started walking towards the ring but then backed away.

1. Evil Uno and Stu Grayson cut a promo about the 10 man tag on on Wednesday’s Dynamite and their upcoming Dark Match tonight.

2. Red Velvet got the win over Alejandra Lion who was making her AEW Debut. Velvet hit the Final Slice for the pin. Lion had this old school Tazmaniac vibe and some of the longest nails I’ve seen.

3. Joey Janella and Sonny Kiss promo. They’re back together and better than ever. Next week is AEW Dark 100 and these two start their road to the AEW championships.

4. Abadon used the leg DDT to pin Killer Kate in another quick squash. I don’t think I’ve seen Abadon in a match on Dark or Elevation longer than 5 minutes.

5. Quick recap of Diamante and Big Swole from last week which leads to….

6. Diamante held the ropes to get the win over Big Swole. I hope these two meet each other again as this was a very solid match. Both women got some good offence and the fans were into both. Eventually, I’d like to see Diamante in Vicky Guerrero’s faction. Both she and Nyla would be great as bully type characters.

7. Evil Uno And Stu Grayson beat Zach Mason and Warren Johnson after hitting a running knee strike/piledriver double team move on Johnson. Mason and Johnson got some offence in this match and Mason is physically impressive.

10. Recap of the Acclaimed cutting a promo on the Varsity Blondes from 2 weeks ago leading to…

11. Dante Martin/Griff Garrison and Brian Pillman Jr got the victory over Ryan Nemeth/Max Caster and Anthony Bowens in the main event when Dante hit a flip over cutter on Nemeth. This was an OK match but the ending sequence was pretty entertaining even with a small botch from Martin. Pillman Jr cut a promo on being the number one contenders in the tag team division. Max Caster’s pre-match rap was a pretty generic 6.5 out of 10 this week.