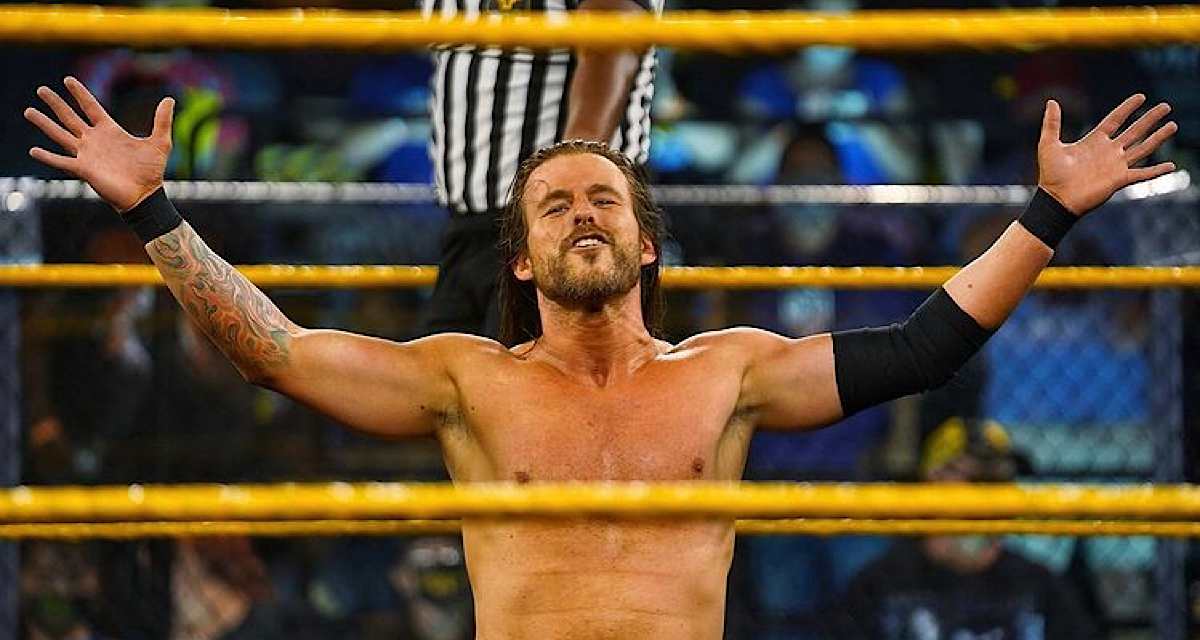 The Olympics are in full swing, and besides the men’s basketball team and their streak-ending loss to France, the United States is really serious about the games. So, the aptly named USA network has bumped NXT for the Olympics, landing the black-and-gold brand’s pre-taped episode on Syfy this week.

Meanwhile, NXT’s upcoming big event — NXT TakeOver 36 — is quickly approaching, and multiple matches have been announced or hinted at leading towards Sunday, August 22.

Tonight’s opening matchup is dubbed a battle of toughness, and all four competitors are looking grizzled. They trade strikes and submissions early, which are especially the trademarks of Ciampa and Dunne who the audience is split between. The latter duo gains control throughout picture-in-picture though, but Ciampa makes his signature closeline comeback after. Thatcher grabs an ankle lock at ringside, but he’s taken out by a returning and recovered Ridge Holland while Dunne connects with Bitter End for three. Thankfully for Holland, he’s looking bigger and better than ever. Although aligning himself with Lorcan, who legitimately broke Holland’s leg last year, is somewhat odd.

Samoa Joe is provoked and asks General Manager William Regal to enter the ring. With tensions between Joe and Karrion Kross peaking, Joe re-signs with NXT as an in-ring competitor, and Regal makes the match official: Samoa Joe versus Karrion Kross at NXT Takeover.

Earlier today, LA Knight and his butler Cameron Grimes were out golfing. Grimes the caddy makes inadvertent golfing puns before betting on Knight’s swing, which ends up landing in the forest.

Hayes has gotten big opportunities in NXT, but not 6’8” big like Briggs. The smaller wrestler actually gets impressive offense in, but Briggs reverses with a running elbow before commercial. While Briggs works down Hayes, tournament competitor Duke Hudson sits next to Wade Barett on commentary, and it’s like seeing double. Meanwhile, Hayes’ snappy maneuvers and Briggs’ power really shine. It’s Hayes top-rope leg drop that secures the victory, and although Briggs was defeated, he came across like a future hot commodity. Both competitors had amazing showings, making this 2021 Breakout Tournament matchup the best yet.

In a network exclusive interview, Franky Monet and the Robert Stone Brand were interrupted by Kacy Catanzaro and Kayden Carter. Monet says “they’re super annoying,” and she isn’t wrong.

Back on the green, LA Knight fumbles another shot — straight into the water. As Cameron Grimes goes and fetches it, Ted DiBiase himself returns on a golf cart. The Million Dollar Man gives a fantastic message to Grimes, which basically encourages him to ditch the butler gimmick and shoot for championship gold.

While exiting the building, Ridge Holland is asked about his attack on Timothy Thatcher. “That’s none of your business,” says Holland. “Timothy Thatcher is not the first person I’ve smashed up. And he won’t be the last.”

The NXT Women’s Champion Raquel Gonzalez enters the ring accompanied by Dakota Kai. The champion reflects on destroying the NXT roster — Xia Li especially, and Kai supports the sentiment. But after a subliminal speech from Kai, Gonzalez turns around into a running boot from her former friend and new challenger. It isn’t official but obviously highly likely: Raquel Gonzalez versus Dakota Kai at NXT TakeOver.

Adam Cole cuts a backstage promo on Bronson Reed, and no explanation does it justice; Cole is too damn good.

The NXT Women’s Tag Team Champions Io Shirai and Zoey Stark aren’t quite friends yet apparently, but Stark is adamant about hanging out. Meanwhile, Mandy Rose is having a private conversation with Gigi Dolin and Jacy Jayne before spotting the camera.

It’s quite obvious that Monet is being prepared for NXT Women’s Championship gold, but to stall, she’s involved here. Monet and Kamea beat down on Carter until Stone interrupts by throwing in a foreign object, which is seemingly a soft purse. “Just use it!” shouts out Stone, but Catanzaro and Carter capitalize on the distraction and pin Monet. Yes, Monet and not Kamea.

Better late than never, because Roderick Strong and Malcolm Bivens of Diamond Mine get their introductory sit-down interview. Bivens brought Strong back into NXT after the Undisputed ERA split and announces Strong versus Bobby Fish for next week.

Shoutout to Imperium’s Marcel Barthel for getting into awesome shape — much like his partner Fabian Aichner who works down Ashonte “Thee Adonis. The massive Top Dolla tags in shortly to assist Adonis’ outstanding dropkick as Hit Row controls heading into commercial. Imperium recovers during break and dominates over Adonis, but the underdog finally reaches Top Dolla. Outside, Legado del Fantasma attacks Isaiah “Swerve” Scott, and Top Dolla makes the save; however, Imperium capitalizes on Adonis for the victory. LDF and Santos Escobar continue the attack until Scott recuperates with a steel chair.

The Way is arguing amongst themselves over Austin Theory’s departure. Indi Hartwell cheers up though when receiving a drawing from Dexter Lumis, but stern parents Johnny Gargano and Candice LeRae don’t approve. But Hartwell offers a suggestion: if Lumis defeats Gargano, he’s accepted into the “family”.

LA Knight and Cameron Grimes’ tomfoolery isn’t over yet, and Grizzled Young Veterans have joined in too. Is golfing big over in England? Grimes sticks up for Knight and accepts a $20,000 hole-in-one bet from GYV. Knight apparently sucks at golf, landing in the water. But the heroic Grimes lines up, swings back, inadvertently nutshots Knights, and wins the bet! Admittedly, this segment was great.

Main event time, and it’s a fresh encounter. Reed obviously has size advantage and utilizes it, but Cole sneakily takes the legs out preceding picture-in-picture. He continues to target Reed’s left knee, but “The Colossal” makes a comeback topped with a senton. They trade offensive maneuvers — notably Reed’s insane-looking Samoan drop and Cole’s big running knee, and the latter eventually connects with Panama Sunrise on his 330-pound opponent. Reed recuperates with a flurry but misses the Tsunami Splash, allowing Cole to connect with The Last Shot for three.

Before long, an enraged Kyle O’Reilly attacks from behind. He exposes the steel steps and delivers a dejavu brainbuster to notable jeers, which is NXT’s hint to follow through on a double turn between O’Reilly and Cole.

Despite NXT being reportedly treated like WWE’s bastard child as of late, tonight’s episode was actually pretty enjoyable. Mainly, it’s because the focal point was wrestling, which is what NXT should probably embrace to become WWE’s alternative again. Speaking of which, the main event proved that Adam Cole is still one of the world’s greatest. But judging by recent events, it’s probably main event to Main Event for Bronson Reed.