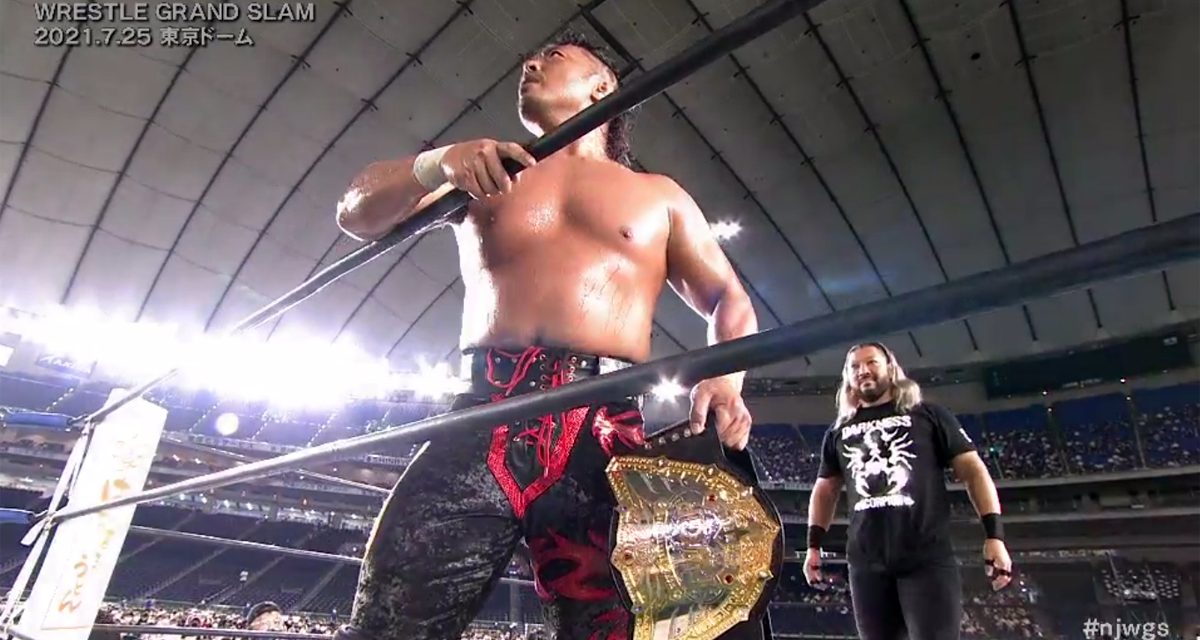 As it turns out NJPW Wrestle Grand Slam was more of a double. Hindered by a major change to the main event and one match being removed from the card with no match to replace it, Grand Slam still had some fantastic matches but on the whole it felt very underwhelming. What separates NJPW from other promotions, the ace up its sleeve, is its constant unpredictability but Grand Slam didn’t have much of that with most of the bouts ending how you would think they would.

Due to a lingering case of aspiration pneumonia Kota Ibushi was taken out of the main event at the last minute. His IWGP World Heavyweight Championship opportunity against Shingo Takagi was awarded to Hiroshi Tanahashi instead. Although Kevin Kelly and Chris Charlton maintained that The Ace had every chance of taking the belt away from Takagi, fans knew he had little chance of doing do.

Things were going Tanahashi’s way as he crushed Takagi with Ace’s High off the top rope and in tribute to Ibushi, a Kamigoye. Takagi kicked out though. Takagi powered out of a snap dragon suplex to drill The Ace with Last of the Dragon. Takagi couldn’t follow up though. The Ace stunned fans by kicking out of a second rope Last of the Dragon minutes later giving them some hope that he could come out victorious. A third Last of the Dragon though would put The Ace away for good.

Takagi celebration was cut short by Evil who appeared in a video message with Dick Togo which ridiculed Shingo. When it finished playing, Evil was standing behind Shingo. Evil crushed Takagi with Everything is Evil and posed with the title belt over his fallen body. Shingo’s Los Ingobernables de Japón pals were nowhere to be found. On the card Evil was replaced in the NJPW Ranbo by Dick Togo and his scheduled match against Tomohiro Ishii never happened. 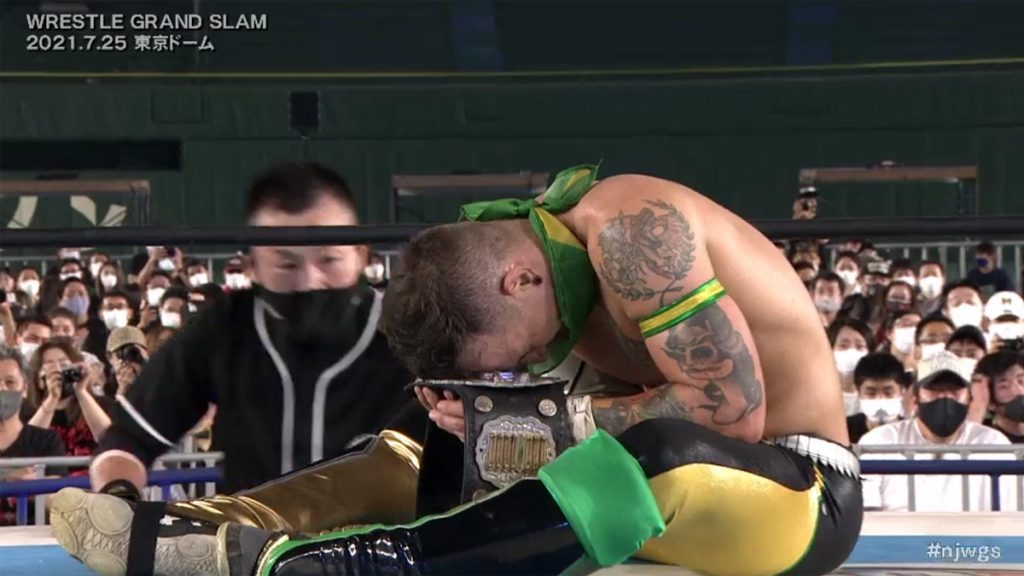 An emotional and historic win for Robbie Eagles. Courtesy: NJPW.

The best moment of the show though was Robbie Eagles, truly one of the very best wrestlers of his generation, claiming his first NJPW title after joining the promotion three years ago. He defeated Desperado to become the first Australian IWGP Jr. Heavyweight Champion in the belt’s 35-year history. In the match he and Desperado targeted each other’s legs and knees making those “wheels” as wobbly as possible. To his credit, El Desperado kicked out of the Turbo Backpack. Eagles hit a 450 Splash on Desperado’s leg and then locked in the Ron Miller Special. Desperado submitted and Eagles won the championship. Overcome with honest and true emotion, Eagles fell to his knees and cried while holding the belt. Eagles was wearing the Australian green and yellow going into the match. Sitting at the announce table, Hiromu Takahashi stood up to congratulate and also lay down a challenge to Eagles. 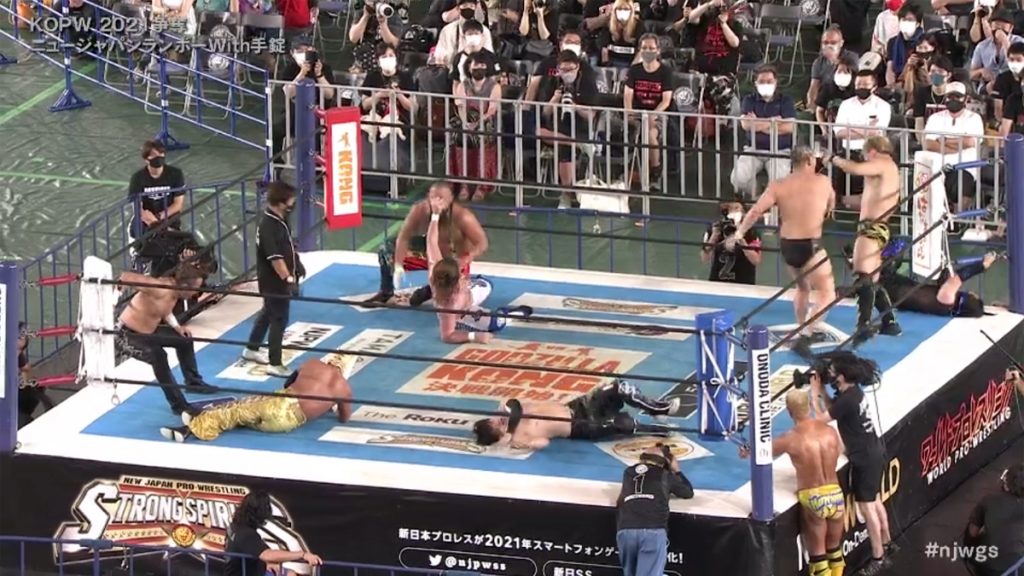 The rings fills up during the NJPW Ranbo. Courtesy: NJPW.

This is a Royal Rumble type match. As per the unique handcuff stipulation though, if you are cuffed at any time you are eliminated from the match. Evil’s music played but Dick Togo took his place. The Great-O-Khan pinned and eliminated Master Wato and Douki at the same time. Yano handcuffs the Great-O-Khan once again knocking him out of the match. Yano almost pins Owens but a handcuffed Kenta stomps him ending the cover. Owens goes for the pin on Yano, however, a handcuffed Yoshi-Hashi stomps on Owens. As Yano rolls Owens up for the pin they hit the official knocking him over. Yujiro Takahashi slips into the ring hitting Yano in the face with his cane. Owens throws blinding powder into Yano’s face. It takes a Jewel Heist, a knee trigger and a Package Piledriver for Owens to claim the KOPW title.

Taguchi survives a UFO and a Thunder Kiss 86 from Phantasmo as Romero made the save. Phantasmo knocks Romero out with Sudden Death. Taguchi catches another Sudden Death swinging the kick into Ishimori instead. Taguchi rolls up Phantasmo for a two count. El Phantasmo escapes Taguchi’s ankle lock. Taguchi pulls Phantasmo’s boot off and is shocked to see what is inside. Ishomori cuts off the official before he can investigate the boot. Low blow and a CR2 pins Taguchi. 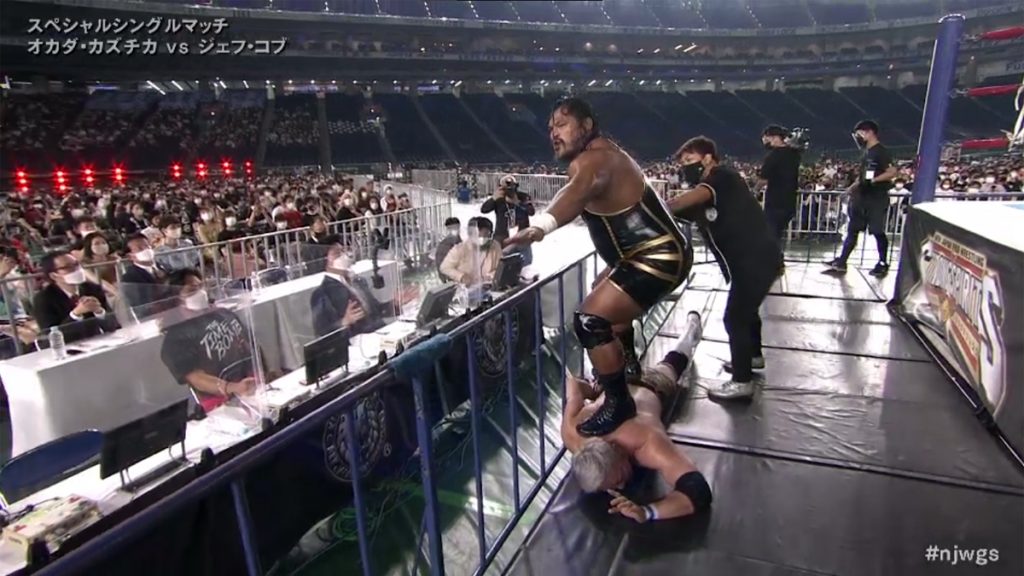 Okada has trouble with Cobb from the very start as Cobb actually drop kicks him off the top rope. On the floor, he picks up Okada slamming his back into the ring apron. Cobb does a surfer pose while standing on Okada’s back. Okada hits back with forearms to the face. Cobb is barely staggered. He knocks Okada down to one knee with one shot. Okada regains some momentum with a draping DDT off a ringside barrier and on the arena floor. In a crazy move, Cobb catches Okada as he executes a plancha over the top rope. He hoists Okada up into a suplex on the floor. The hollow thud is seriously nerve rattling. Okada rolls back into the ring at 19. Cobb picks up Okada powerslams him into a corner and onto the mat for a two count. As Okada and Cobb trade forearm smashes while on their knees Cobbs says: “I hate you!”. The match ends in an awkward cover when each escapes the other’s finisher. Okada sort of backdrops Cobb over for a cradle and a pin. The announcers cannot make any sense out of what happened. 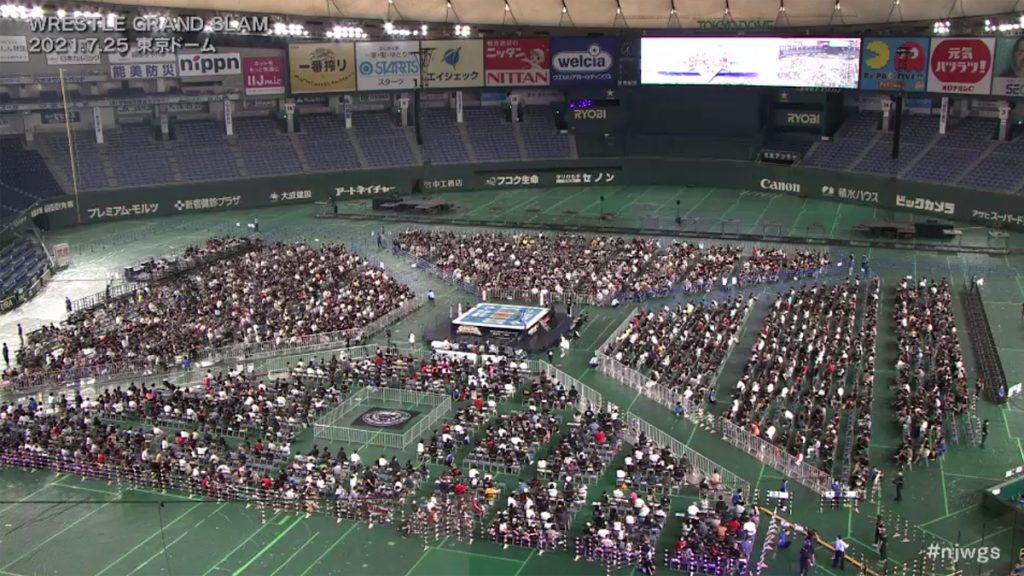 The Grand Slam audience in the Tokyo Dome. Courtesy: NJPW.

Sabre Jr. turns a Destino into a Euro Clutch to retain the titles. Yoshi-Hashi and Hirooki Goto come down to the ring to issue a challenge to Suzuki-gun and Los Ingobernables de Japón doesn’t take too kindly to that.

The situation is what it is in Japan with another state of emergency being declared. The overwhelming vacantness of the Tokyo Dome wasn’t NJPW’s fault. Still, it took away from the experience seeing all those empty seats in such a massive stadium. The main event still delivered despite the change. Without that unpredictability factor though the show was just lacking that next level, elevated pro wrestling experience that fans love about NJPW.