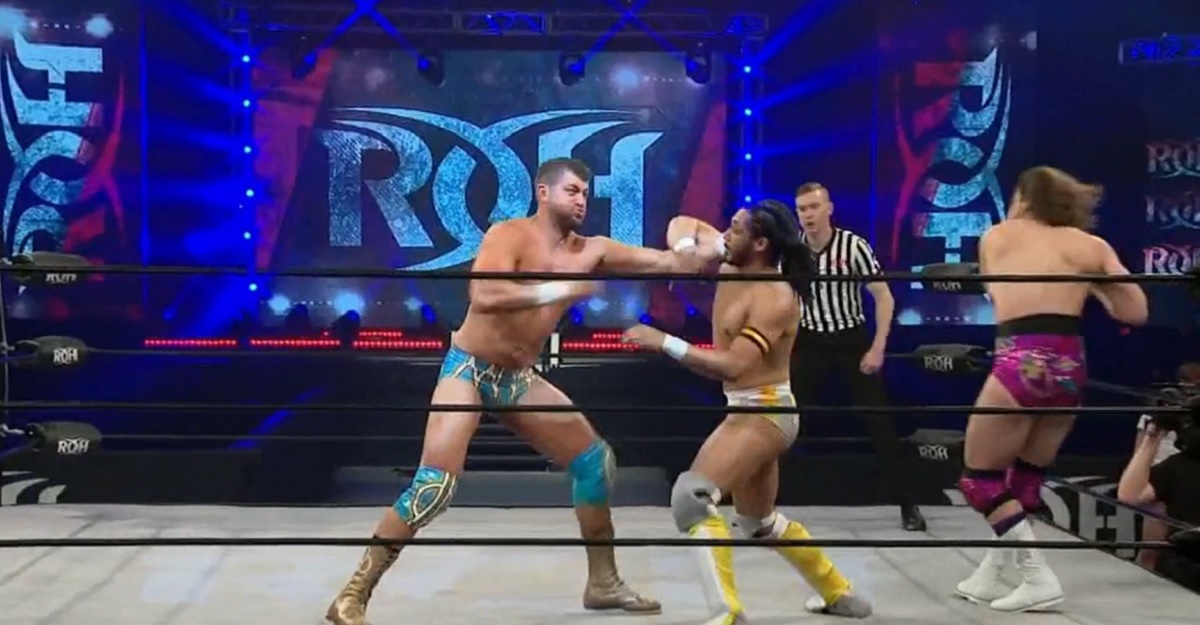 Greetings and salutations everyone and welcome to my weekly ROH TV report. This episode of ROH TV finally brought us some follow up from the Best in the World PPV as we will see former team members Dalton Castle, Eli Isom, and Dak Draper fight in a triple threat. I was quite shocked that ROH recorded this set of TV tapings in an empty arena. The next time ROH will have fans will be for their Glory By Honor two night special on August 20 and 21 from the 2300 Arena in Philadelphia, Pennsylvania.  Without further ado let’s get to it.

The show kicked off with highlights of last weeks controversial ending to the Quinn McKay, Mandy Leon match which saw Mandy Leon tap out while the ref was distracted only to use brass knuckles on McKay for the win.

Brian Zane interviewed The Allure, Mandy Leon and Angelina Love. The women continued their harassment of Quinn McKay by saying she had opportunities to wrestle each of them and she blew them both.

Quinn McKay is back on hosting duties as she welcomed us to another week of ROH TV.  McKay said she is still suffering from the shot to the head from the Brass Knuckles and is even more heart broken she won’t be able to qualify for the Women’s Championship Tournament this Summer. McKay stated that the ROH Women’s Championship tournament starts on ROH TV next week. For this week’s show, McKay announces that the main event will be former team members turned enemies as Eli Isom, Dalton Castle, and Dak Draper battle it out in a triple threat match. Also on the show will be PCO vs. Sledge with Danhausen on commentary. Lastly, there will be a one-on-one match featuring the number one contender to the World Championship, Flip Gordon as he faces The World Famous CB (FKA Cheeseburger).

Ian Riccaboni and Caprice Coleman welcome us to to the show. They announced that Flip Gordon will face the ROH World Champion at Glory By Honor Night Two at the 2300 Arena in Philadelphia on August 21, 2021.

As Flip Gordon’s entrance happened, we go to a pre taped interview with Brian Zane. Flip says he has nothing to say until he gets his world title shot. The World Famous CB entered the arena and we get a pre taped promo from him as well. The World Famous CB said Flip wants to be every type of wrestler but he will make him another victim when he makes him tap out.

The code of honour was not adhered to by Flip Gordon as the two men locked up to start the match. The match started off with headlocks, arm bars and joint manipulation by both men. We saw a very good display of technical wrestling by both men. The World Famous CB had Flip Gordon in a wrist lock that he held control by holding onto his arm as he put his knee on Flip’s back and started to do joint manipulation on Flip’s wrist while going for an early pin attempt. Flip attempted a clothesline but The World Famous CB blocks it and climbs Flip’s back to lock in a La Escalera (The Staircase) submission move. Flip gets him off his back and clotheslined CB to the outside of the ring.

Flip controlled the match after the clothesline and kicked CB throughout the ring and back outside. Flip landed a double axe handle onto CB who was on the outside of the ring and tossed him back into the ring. Flip charged a weakened CB on the corner but after a last minute reaction, Flip ended up hitting the ring post as CB moved out of the way. CB is now working Flip’s injured shoulder. CB was able to lock in a Kimura but Gordon used his strength to lift CB up and rammed him onto the turnbuckles. With CB now dazed, Flip Gordon lifts him and landed a back flip and locked in an STF as CB quickly tapped out to give Flip Gordon the win.

After the match the Flip Gordon kicks CB out of the ring as he celebrates his win. The Bouncers (The Beer City Bruiser & Brawler Milonas) come out and harass Ian Riccaboni and Caprice Coleman at the commentary desk. The Beer City Bruiser said they are putting the roster on notice and will be the next 6-man and Tag Team Champions.

Danhausen was the special guest commentator for our second match. During Sledge’s entrance we saw a promo where he claimed that to stop a man who says he runs off electricity you need to ground his a$$. PCO entered the ring and during his promo he said Sledge will rest in hell for challenging the Canadian Frankenstein.

The code of honour is not adhered to as both heavyweights went straight into a ground and pound brawl. Sledge with a drive by across the face of PCO for a two count. Both men trade back and forth blows as we see an all-out fight break loose.

PCO went for a body slam but Sledge countered it into one of his own and delivered an elbow to the back of PCO’s head as he once again got a two count on the pin. Back from the commercial break PCO delivered a body slam to Sledge and quickly goes for a dropkick right onto the back of Sledge as he got a two count of his own. Meanwhile on commentary Danhausen is telling the viewers that as his fame grows, he wants to be paid more sacks of money.

Sledge with an over the head one-handed German suplex but PCO rose like Frankenstein’s Monster which led to another back and forth punch and slap contest between the two competitors. PCO locked Sledge for the chokeslam but Sledge did the same to PCO. PCO overpowered Sledge and tossed him onto the outside of the ring. As Sledge slowly gets back to his feet PCO does a Quebec Cannonball dive through the ropes onto Sledge.  PCO lifts Sledge and placed him on the apron of the ring. PCO climbed to the top rope and delivered a Cannonball onto an already woozy Sledge. Somehow Sledge was able to gain his composure and continue the fight. Both men battled on the outside of the ring all while ignoring the referees’ orders. The referee has had enough and he called for the match to end.

Both men were battling on the outside as a small army of security comes out to attempt to restore order.

Back from commercial, Sledge is interviewed by Brian Zane who said that he hung with a former world champion. Sledge sates If PCO thinks its over, he has another thing coming.

We are again reminded of the ROH Women’s Championship tournament bracket as the tournament starts next week on ROH TV. 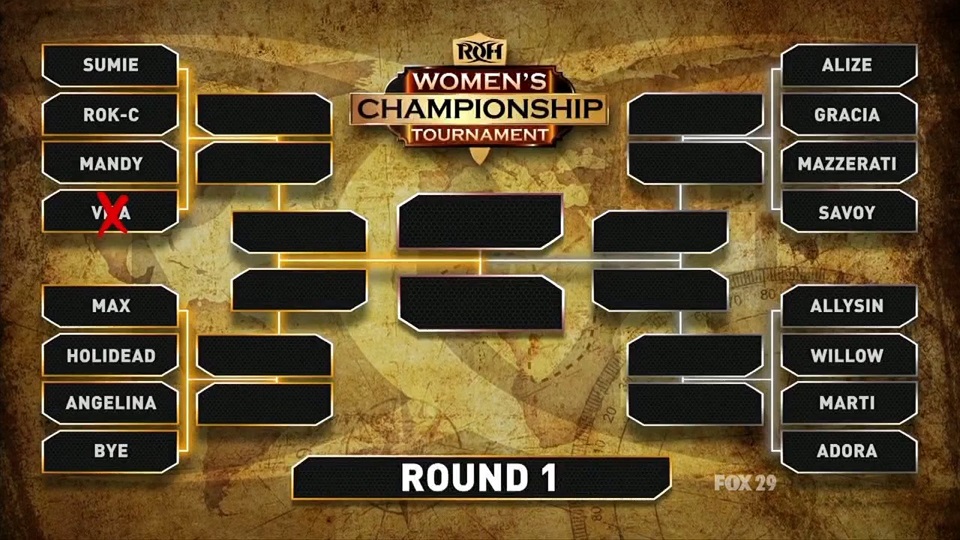 Dak Draper was out first with his triple shirt gimmick stronger than ever. In his pre match promo he said that most guys are chasing honour and respect, but he is all about titles, prestige, and attention. He ends the promo by saying that for some men wrestling two men can be hard for some but since he’s Dak Draper, everything is just a little bit easier. Eli Isom was out next and during his promo he said he should have known better than to trust Dalton Castle and Dak Draper at Best in the World 2021 and that he will prove to them you shouldn’t make a fool out of him. Dalton Castle is last out with a beautifully choreographed entrance. During Dalton Castle’s promo he said that the Hollywood Foreign Press will take notice.

Dalton Castle ordered his young boys to take his shirt off but they tangle him in the shirt. He gets frustrated and rips the shirt off himself as he runs into the ring and begins attacking both Isom and Draper to kick off the main event. Draper Clotheslined Castle to the outside as Isom and Draper exchanged chops. Draper headed to the outside of the ring to regain his composure, but Isom runs the ropes and flips onto Draper. Dalton Castle tried to sneak attack Isom but Isom got the upper hand. Draper holds Isom from behind as Castle delivered a running knee onto Isom. The first part of the match was nonstop action.

Back in the ring, Isom and Castle battled it out until Draper tripped Castle, pulled him to the outside and sent him headfirst to the ring post. Now it was Draper and Isom in the ring for a while as Draper landed a flapjack to Isom. Castle grabbed Draper’s leg and tried to pull him to the outside but Draper outpowered him. Isom now controlled the highly competitive triple threat match.

Isom from a dead lift landed a back suplex to Castle. Back on the outside of the ring the three men are going back and forth in a very quickly paced match. Draper attempted a pin to Isom but Castle once again dragged Draper to the outside and the two men argue about their match from Best in the World as they each blamed the other for the loss. Draper eventually tossed Castle over the barricade. This allowed Draper and Isom to fight in the ring alone.

Back from the break, Isom with a Moonsault to Draper on the outside of the ring. Castle rose like a mechanical doll only to throw a chair at the head of Isom. Castle tossed Isom into the ring as Draper pushed Castle to the ground. Castle allowed Draper to get back into the ring as Isom is still down from the earlier chair throw. Back in the ring, Draper lifted Isom and delivered a Magnum KO as Dalton Castle’s Boys were on the ring apron imitating Draper’s move. Draper covered Isom for the three.

Dalton celebrates with the Boys as a confused Draper watches on. Castle leaves the ring area as Draper celebrates. After the match Draper high fives a fallen Isom as the show comes to a close.

The start of the ROH Women’s Championship Tournament.

Until next time, Stay Safe!

This show was still in an empty arena but the action was better than last week’s show. I really enjoyed the Heavyweight clash between PCO and Sledge. I am guessing they are building to an eventual gimmick match between the two at Glory By Honor.  Flip Gordon continues to pick up wins as he is making a real case for this World Title opportunity at Glory By Honor Night Two against (as of writing) Bandido.  The Triple threat match had a lot of nonstop action and told a fun story between Dalton Castle and Dak Draper. Castle clearly has something up his sleeves, but we will have to keep tuning in to find out.