AEW Dark and Elevation: A Comedy Match and an Eight Man Tag 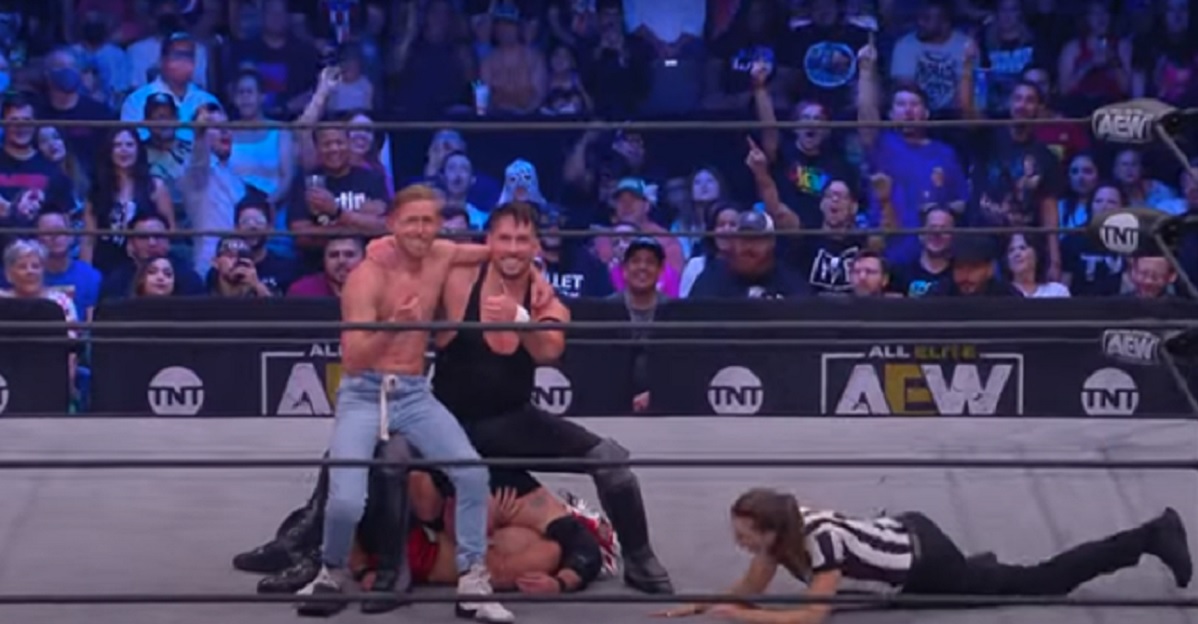 Greetings wrestling peeps and welcome to the AEW Dark Elevation and AEW Dark recaps for July 19th and 20th.

Both shows were really good and benefited from having a live crowd which always helps. Elevation was a solid show with solid wrestling. That said, I’m giving the slight nod to AEW Dark this week as there were a few really good matches and the show had a better pacing to it. As an added bonus, Dark was only 47 minutes long which made it a much easier watch compared to Elevation.

I’m normally not a comedy guy but oddly enough, the match that entertained me the most on Elevation was Chuck Taylor and Orange Cassady vs The Chaos Project. There were some fun laugh out loud spots in that match along with some good wrestling. For you more serious types, Jungle Boy vs Anjelico was a good match too.

I’m also not usually a fan of eight man tag team matches but I really liked The Acclaimed and Private Party vs The Varsity Blondes and The Dark Order. All four teams were given a chance to shine in what was a pretty good competitive match. I give this match the slight edge over the Dark main event of Dustin Rhodes vs Aaron Solo which was also pretty good.

1. Before the show started, Eddie Kingston and Penta with Alex Abrahantes cut a promo for their match later in the show against the Wingmen.

2. Lance Archer mauled Zachariah and got the pin after hitting the Blackout. Lance did the gimmick where he beat up his opponent backstage then threw him into the ring to start the match. Jake Roberts joined the commentary team during the match.

3. Chuck Taylor and Orange Cassady beat Dr. Luther and Serpentico when Cassady hit an Orange Punch on Luther. This was a fun match with some good comedy spots. After the match, Bunny and Blade came out and taunted Cassady

4. Hikaru Shida beat Dulce Tormenta after hitting the katana knee strike.This was an OK match however, I’ve seen better from Shida. That said, I love me some Shida.

5. Mark Sterling and Jade Cargill promo with Jon Kanak who is the head of Activist Artist Management (a talent agency).

6. Powerhouse Hobbs (w/ Hook and Ricky Starks) used the Town Business to get the very quick pin on Lucas Chase.

7. Frankie Kazarian submitted Baron Black with a crossface chicken wing. After the match, Brandon Cutler tried to attack Kaz from behind but Cutler tripped trying to get into the ring. Kaz laid him out and cold sprayed him. Gallows got into the ring next and laid out Kaz.

8. Powerhouse Hobbs backstage promo about Brian Cage. This was a good promo and Hobbs’ has improved a lot from his earlier promos.

9. Jungle Boy (w/ Luchasaurus) made Angelico (w/ Private Party) tap to the snare trap. This was a pretty good back and forth match with both guys getting offence. Jungle Boy was over like rover with this crowd. During the match, Private Party attacked Jungle Boy while the ref was distracted.

10. Red Velvet used a leg scissor neckbreaker move to beat Julia Hart (w/ The Varsity Blondes). I have been very critical of Julia Hart but to be fair, she is constantly improving and it showed in this match.

11. The Gunn Club (Billy and Colton) beat Brock Anderson and Lee Johnson when Colton pinned Johnson with the most dangerous move in wrestling….an inside cradle (and a handful of tights). I would really rather see Lee Johnson get a singles push as opposed to being in this tag with Brock Anderson.

12. Luchasaurus pinned Fuego Del Sol after hitting a chokeslam flip into a knee strike to the face. The crowd was really into Fuego and were chanting his name at the beginning of the match.

13. Dante Martin pinned Captain Shawn Dean after hitting a flip over cutter. Dean got some decent offence during the match.

14. Tay Conti and Serena Deeb got the win over Vertvixen and Jazmin Allure when Deeb got the Serenity Lock on Allure causing her to tap. I forgot how good Deeb was and would love to see her (and Tay) get more TV time on Dynamite. She can wrestle with anyone and make it look good.

15. In the main event, Penta and Eddie Kingston (w/ Alex Abrahantes) beat Cezar Bononi and JD Drake after Penta used the armbreaker on JD Drake to get the pin. Eddie and Penta were mucho over with the crowd. I also think JD Drake is being wasted in the Wingmen and would like to see him either on his own or maybe in another faction like HFO. Also, Bononi is a physical specimen but his current gimmick doesn’t resonate with me.

16. After the match, Penta, Alex and Eddie put over the Austin crowd and AEW.

1. Dustin cut a promo on his match with Aaron Solo later on the show. Really good promo.

2. The Blade (w/ Bunny) beat up home town wrestler Ryan Mantell and got the pin after hitting a doctor bomb.

3. Thunder Rosa subbed KiLynn King with the Peruvian Necktie in a decent match. King got a nice reaction from the crowd but Thunder Rosa got a better one.

4. Private Party and The Acclaimed beat The Dark Order (Alan ‘5’ Angels and Vance ‘10 Preston) when Caster hit the mic drop on Angles in what was a pretty good match. The Max Caster pre-match rap was another solid 7 out of 10. Plus he gave bread to Julia Hart which was funny. After the match, Bowens cut a promo on Julia Hart and said they wanted a shot at the AEW Tag Team titles.

5. Abadon used the leg DDT to get the pin on Promise Braxton in a very Abadon like squash.

6. Bunny got the win over Big Swole when Blade distracted the ref and Diamante (who had come out earlier) kicked Big Swole. This wasn’t a bad match in that it pushed the storyline between Swole and Diamante.

8. Big Swole cut a promo on Diamante. This is a feud that could easily be on Dynamite.

9. In the main event, Dustin Rhodes hit the bulldog to get the pin on Aaron Solo (w/ QT Marshall and Nick Comoroto). Before the match, Aaron Solo cut a heel promo running down the town and Dustin Rhodes. Solo also got a lot of offence in this match and Dustin gave him a good match but of all the young guys in the Factory, Solo is the least charismatic, even more so than QT (which is saying a lot).