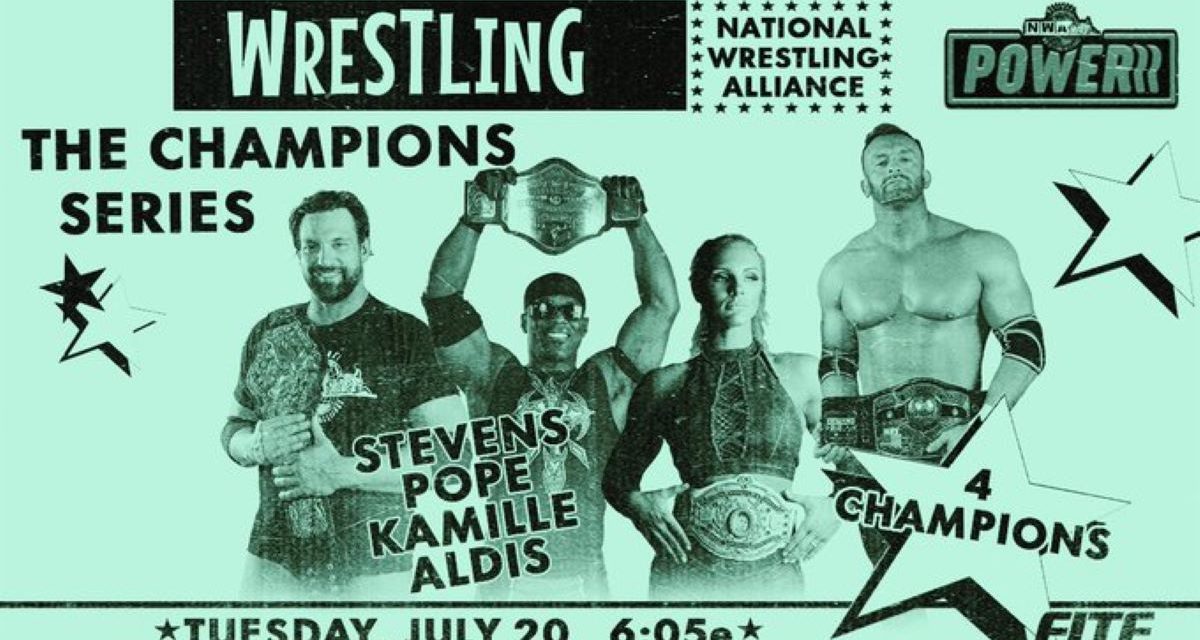 No need to Step Into The Fire again, since today is the first day of the Champions Series on NWA Powerrr.  This is a draft day show where the Champions of the NWA gets paired with the Legends and comprise their teams to see who will be supreme….or something.  This may be a new concept for some, and there’s no wrestling this show, but it does present some interesting matchups.  This will be a recap, with my analysis of what this can all lead to, since they have a double PPV coming up next month.

So here’s the breakdown of the draft day basics:  What’s At Stake, The Champions, The Legends, The Co Captains, The Contenders, The Teams Draft, and the Matchups.  Afterwards, I will offer My Predictions on what could possibly happen. That said, you’re all asking the same question I have, which is….

The show outlines at the start the Champions and the legends will be paired up, vying for “Status, Opportunity, Insurance, and yes….Gold!”  What that means is this:  the teams are going to earn points, and they are everything (unlike, say, a win-loss record somebody in Jacksonville, FL came up with.  *Ahem*).  In any case, teams can earn points via pinfall, submission, or draw.  Each member of the winning team will receive open title shots that they can redeem at any time; and for the team’s captain, they will receive a year’s protection from all who have served beneath them or a new title shot, should they so choose.

This leads to Joe Galli and May Valentine going over The Champions and the Legends.  No disrespect to the commentary, but I’ll take over this part for you fine folks, and give you…

They are (in case you’ve been living under a rock): 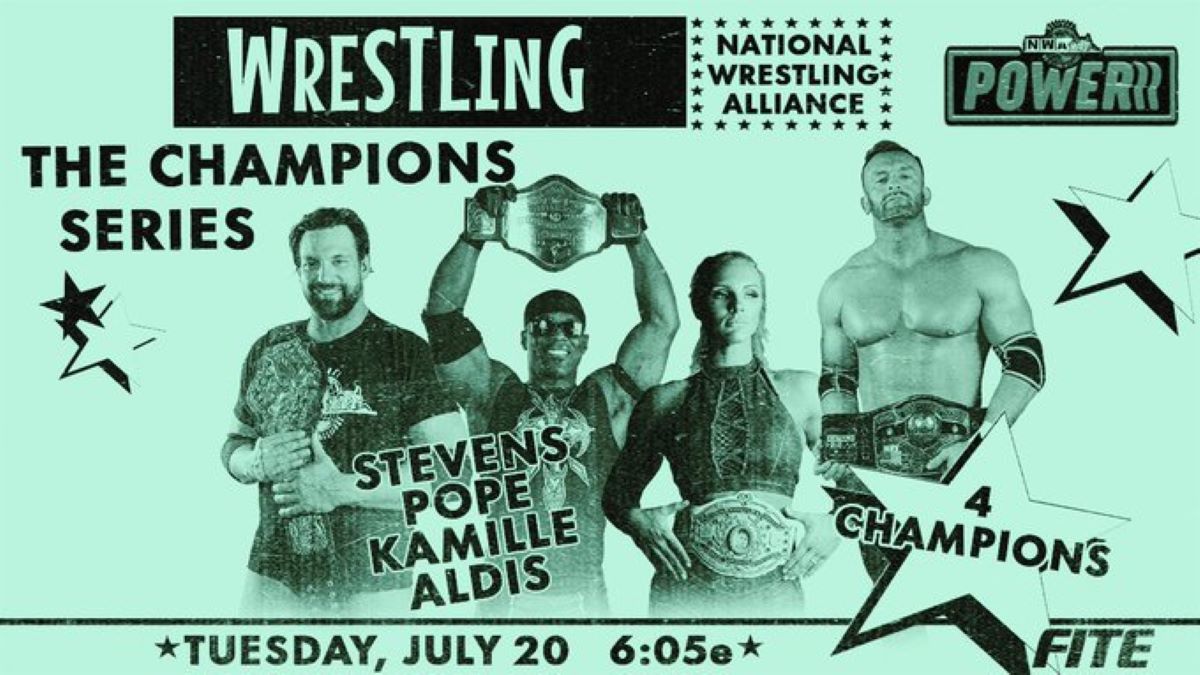 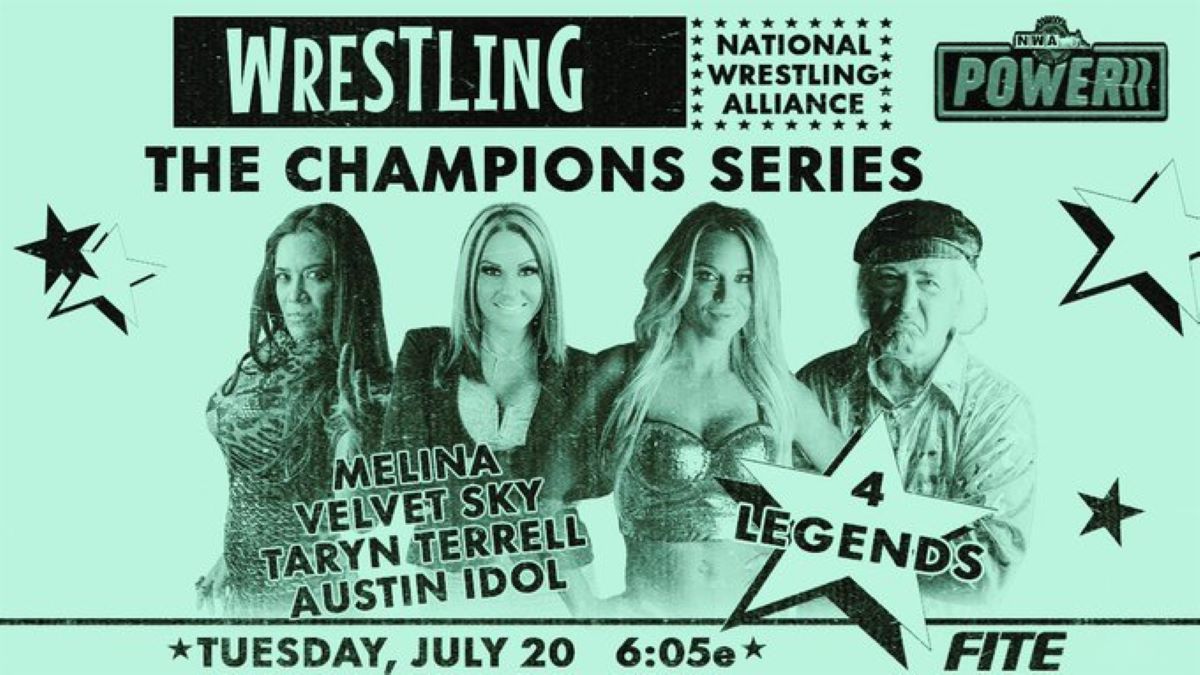 OK, there’s some questions on what constitutes a Legend, but I’ll address in a sec.  At this point in the show, both the Champions and the Legends will be paired off at random to be….

As we see the faces of some of the champions, some pairings are good, while others are…well, unique to say the least.  They are:

Can ya tell which of these things is not like the other?  Take a look, and see if you can spot the differences. 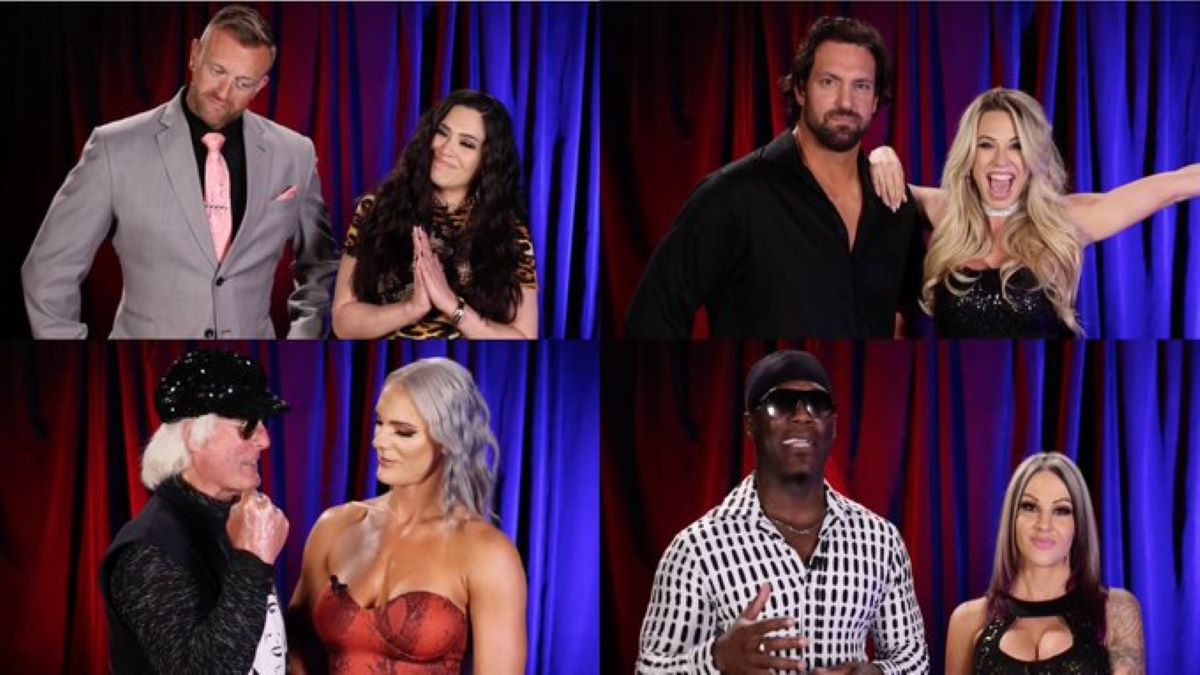 That now leads to…

And there are twenty names to choose from in this field.  Among the potentials here are:  Skye Blue, Kratos, JTG, Slice Boogie, Crimson, Jax Dane, Jennacide, The Son of the Question Mark ™ (or The Masked Man, if you wanna be boring about it), Fred Rosser, Thom Latimer, Colby Corino, Tyrus, Trevor Murdoch, Jeremiah Plunkett, Jordan Clearwater, Sal Rinauro, Mims, Kenzie Page, and Marshe Rockett 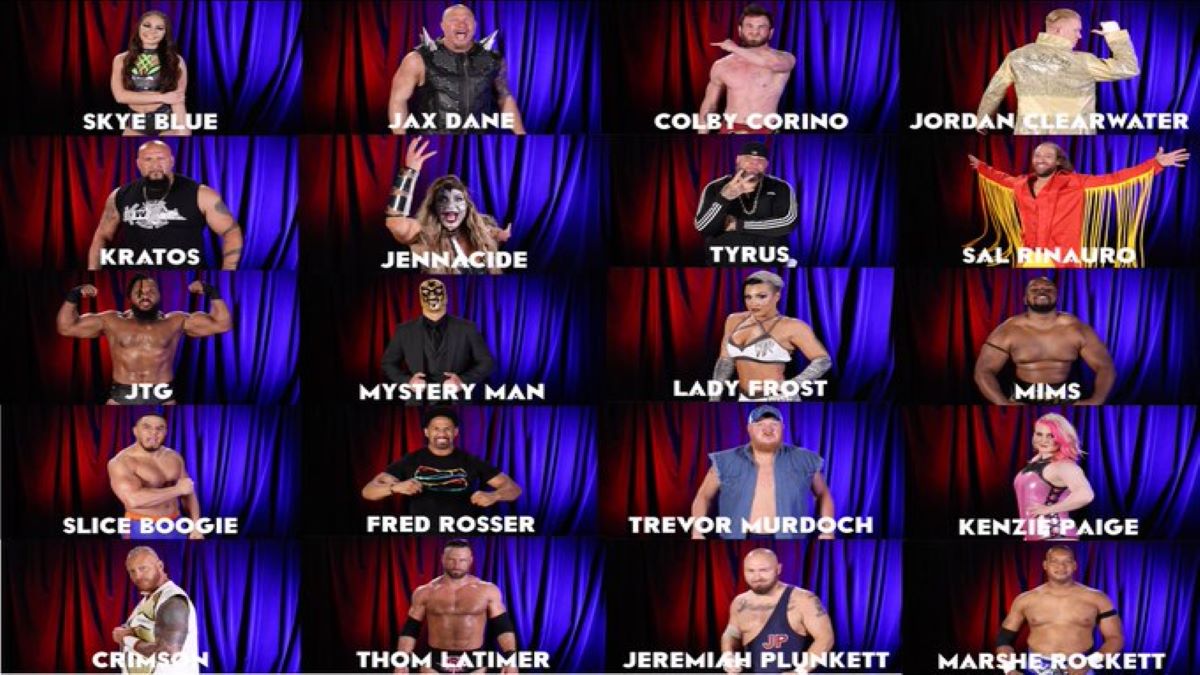 This now brings up to…

At this point, Galli has the co-captains come up to The Podium to make their team picks.  I’ll spare you all the drama (for now), but the gist of it is:

The remaining four contenders are then added at random to the teams to fill out the roster as alternates should something happen to any of the drafted team members.  The four added to the teams, respectively, were:  Sal Rinauro, Jordan Clearwater, Jeremiah Plunkett, and Colby Corino. 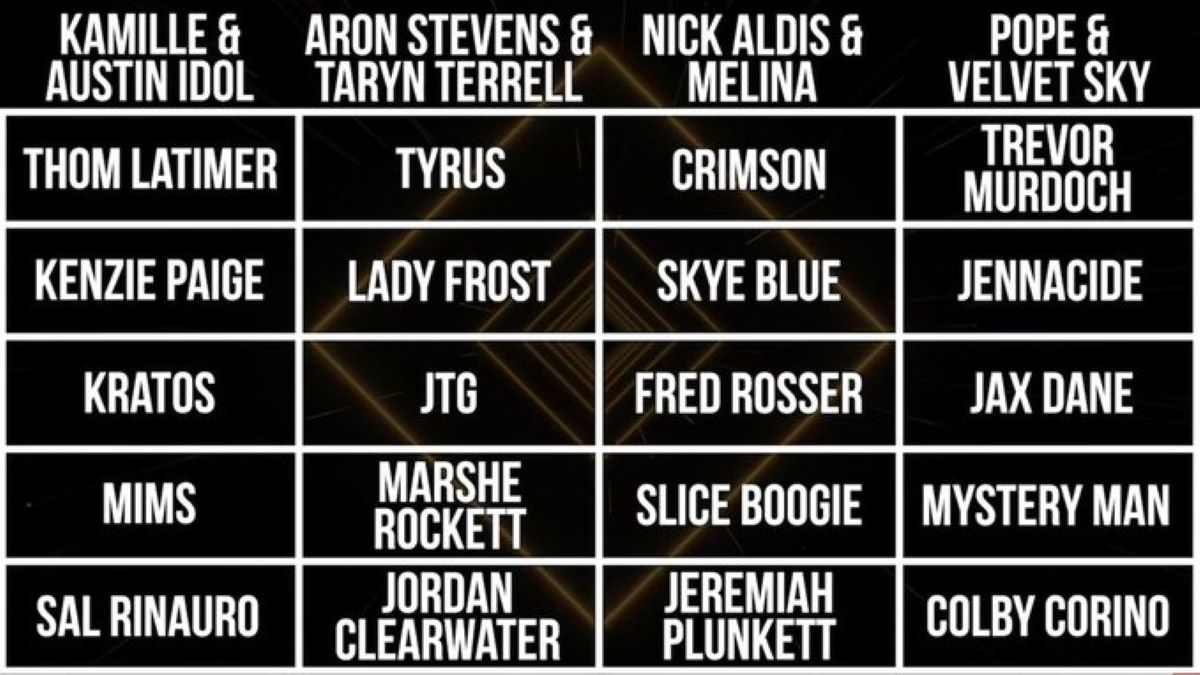 Now we get to…

So the teams will face each other in different block divisions:  Block A and Block B.  In Block A, it’s Team Kamille/Idol facing against Team Aron/Taryn.  Block B is Team Pope/Sky against Team Aldis/Melina.  As each captain went up to Kyle Stevens at The Podium to go over who will face against who, as Joe Galli and Tim Storm discuss the importance of the matchup, and what they could mean.  But, here’s the breakdown for both Block A… 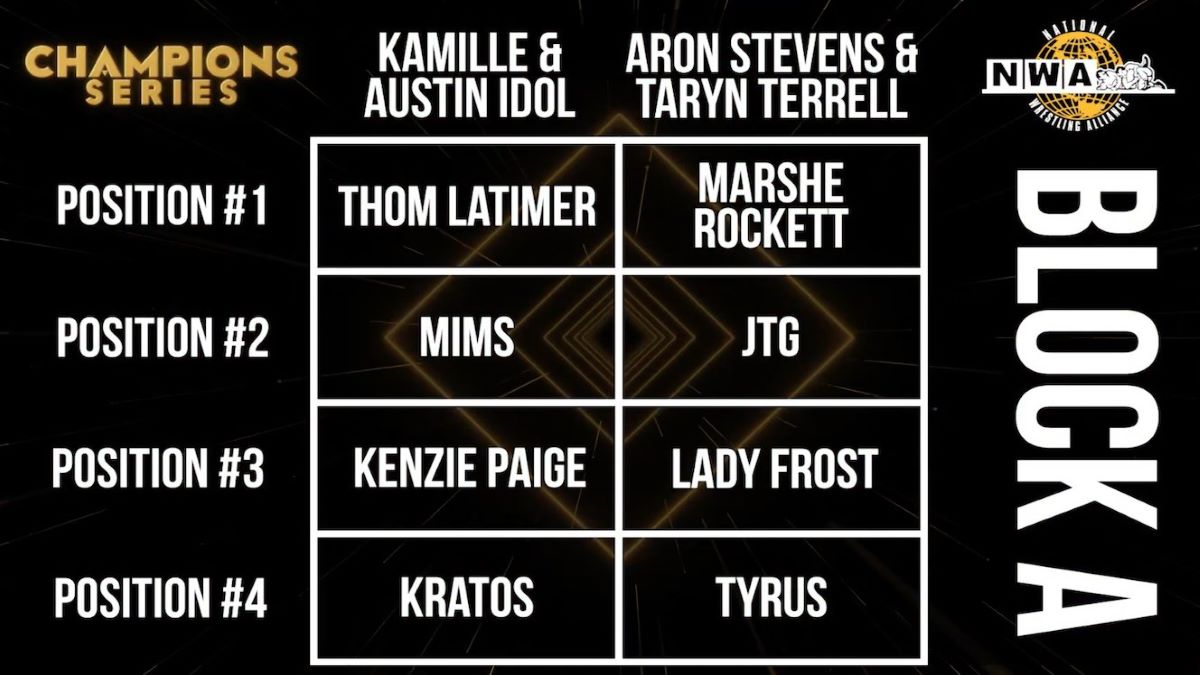 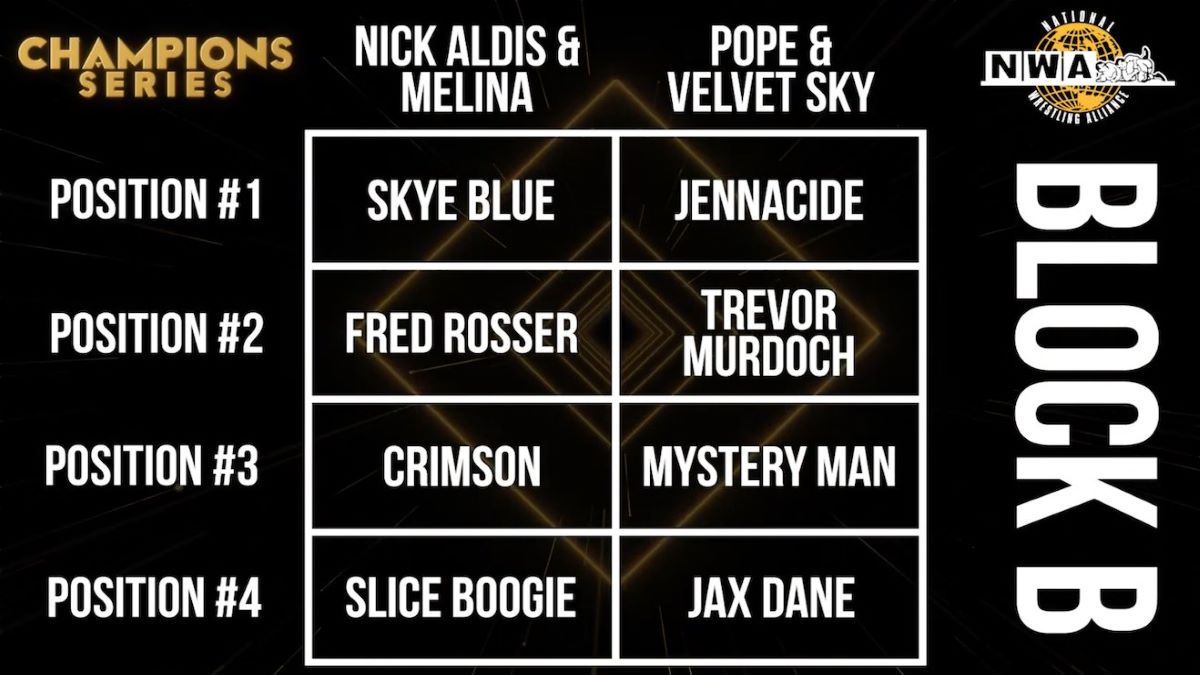 Which now brings us to the most important part…

Now, if you got the results from some other (dare I say, lesser) web sites that talk about pro wrestling…shame on you, and don’t be a douche and spoil it for others.  The format seems to be similar to what New Japan Pro Wrestling has done in the past with their G1 Climax Series.  As for how the points will be metered out for the pinfall/submission/draw scenario is anybody’s guess. But what do I think could possibly happen in the next four to six weeks?  Here’s what I predict could take place:

What happens after this?  Nothing more was said on that point, but since one team can come out the winner, my guess is that Team Aron/Taryn will face off against Team Aldis/Melina in some semi-final matchup.  As I shake the Magic Eight Ball for clarity, all signs point to Aldis/Melina being victorious, since Aldis can use the win to protect himself for another year of anyone challenging him for Sweet Charlotte, but Melina can use the win to secure a title shot down the road against Kamille.  Except Strictly Business Shenanigans to occur during this time.

At this point, I’m not going to rate this show, since, well…how exactly do you rate a draft show?  I don’t know, but this is more interesting than any fantasy sports draft that’s out there (Yes, I said it!  Try and prove me wrong).

I do like how the NWA is using this opportunity to create some new angles and new feuds, while sustaining established ones.  It’s no G1 Climax, but it has some great potential moving forward.  As for the NWA’s use of the “Legends” like Terrell, it’s a moot point because at the end of the night, what matters is if she has a connection with the audience and can get them to react to whatever nonsense she does.  Same with any of the co-captains as well, and much their involvement will count as much as the points their teams will earn.

As for the next few weeks of the Champions Series, just pour a draft of beer, and say it with me, folks:  Show Me What You Got, NWA!