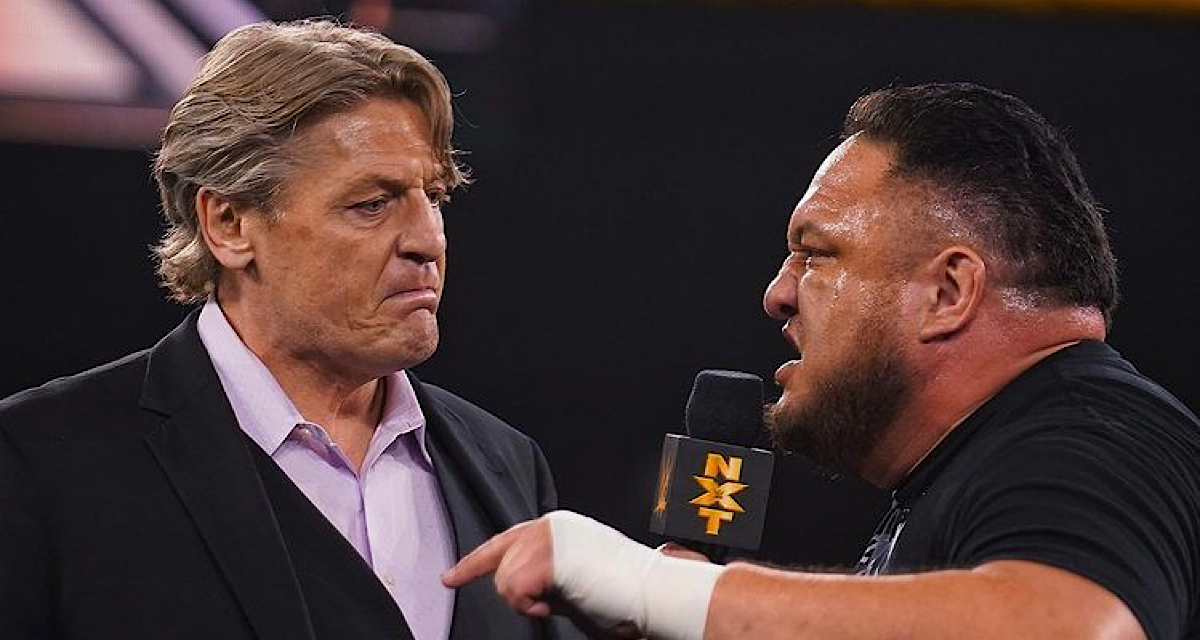 Less than 24 hours after Karrion Kross’ Monday Night Raw debut, an awkward vibe is surrounding the NXT brand. The NXT Champion’s undefeated streak was broken by Jeff Hardy, in about a two minute bout, and bewilderment of course followed. But since tonight’s logo is black and gold instead of red, Kross’ absurd loss is back-burnered for now.

After being choked out last week, Samoa Joe opens the episode. The enforcer isn’t suited like usual, and he demands Kross to appear. But General Manager William Regal interrupts to reprimand a provoked Joe, who insists that “somebody tonight is going to sleep.”

Roderick Strong and Tyler Rust vs Bobby Fish and Kushida

As Diamond Mine makes an entrance, the opposition of Fish and Kushida blindside them before cutting to commercial. The duo remains in control, although Strong eventually reverses with his signature backbreaker and amazingly loud chops. Fish receives the hot tag, but he’s halted by an apron backbreaker and another break — which, for an NXT opener, is atypical. Interestingly, commentary mentions that Malcolm Bivens himself recruited Strong and Hideki Suzuki, which is seemingly the only insight we’ve got regarding Diamond Mine. But nevertheless, Kushida makes a hot comeback and ultimately taps Rust out. Whatever momentum the Diamond Mine debuted with is very quickly diminishing.

LA Knight and his jovial butler Cameron Grimes pulled up to the Capitol Wrestling Center earlier, and Drake Maverick offered to help carry bags; Knight turned down the gesture.

Kamea accompanies Monet during her entrance, but Stone trails behind “without an invitation.” Over by commentary, Mandy Rose lays atop the announce desk while Jayne is on offense, but Monet quickly reverses with her finisher.

Earlier today, Kyle O’Reilly interrupted an interview with Johnny Gargano and Austin Theory. The latter is “on his own” against O’Reilly up next.

Midweek wrestling cannot catch a break as “NXT invades Syfy” for two weeks, beginning next Tuesday. One would assume that ratings will drop, but NXT numbers are low enough already.

For the record, Theory’s singles theme is laughable, but his impressive build makes up for it; he’s noticeably much larger than O’Reilly and utilizes this for early control. They juggle momentum throughout picture-in-picture, and O’Reilly catches Theory’s rolling dropkick with a heel hook. The former makes a comeback with strikes and limb targeting, powers out of the opposition’s consecutive power moves, and “snaps” when Theory goes for the steel steps. The “switch flip” doesn’t really translate with the audience, and O’Reilly flatly wins with the top-rope knee drop and finishing submission. O’Reilly is undoubtedly talented, but something isn’t clicking.

To parallel Hit Row’s hip-hop cypher, Legado del Fantasma brings out a mariachi group, but Santos Escobar won’t lower himself to entertain the audience. Before long, Hit Row interrupts to spit some bars and square up with LDF. The North American Champion Isaiah “Swerve” Scott grabs a stray guitar and smashes it over Joaquin Wilde to send a message.

Backstage, The Way are having some internal issues regarding losses and kisses. But amidst the arguing, a dejected Austin Theory leaves the group behind.

Samoa Joe has been waiting for Karrion Kross all night. No really, he’s been stationary besides the parking lot the entire show.

For both Chase and Jones, tonight’s first round matchup is their NXT debut. Jones in particular has garnered recent buzz and definitely shows a bigger upside than Chase — the former Harlem Bravado — with insane size and agility. A big and basic slam sends Jones through the tournament for three.

The NXT Tag Team Champions MSK are finally going to explain the acronym! Hilariously though, an Imperium vignette interrupts them. “And that’s what MSK stands for” says an oblivious Wes Lee.

Pete Dunne and Oney Lorcan respond to Tommaso Ciampa and Timothy Thatcher’s attack last week. They’ll have a match on Syfy next week — or as Dunne suggests, a “scrap.”

Grimes holds the Million Dollar belt up high ringside as Knight beats down his opponent. The much smaller Maverick has fight, but Knight reverses as “to the moon” chants ring aloud. Knight instructs Grimes to lift the championship belt one more time, and timely, Maverick kicks his opponent right into the gold. He capitalizes with a rollup for three, but Knight attacks post-match and demands Grimes to help. To much regret, Grimes throws a big right and knocks Maverick down.

A bald Caucasian man drives up in Karrion Kross’ vehicle, but it isn’t Karrion Kross. The valet frantically tells Samoa Joe that the champion is actually inside the Capitol Wrestling Center.

Tian Sha isn’t with Li, but Dakota Kai is ringside with the champion. There’s about a seven-inch height advantage favoring Gonzalez, but the challenger compensates by ramming the former’s left knee into the post. Consequently, Li has full control during picture-in-picture, and Li’s lethal striking game is indisputable — ask Mercedes Martinez. But it comes full circle when Gonzalez slams Li down and delivers a senton from the ropes. Doctors quickly attend to Li, and replays show Gonzalez’ 6’0 frame crashing onto Li’s midsection. Brutally, Gonzalez sends it home with a giant slam for three.

Samoa Joe heads straight into the ring and demands Karrion Kross to appear. The champion instead shows up on screen with a knocked out William Regal laying in the parking lot; Joe failed to criss Kross!

Samoa Joe said that “somebody tonight is going to sleep,” and it might’ve been whoever watched this show. NXT in general has had stagnant momentum for a while, but Karrion Kross’ RAW loss was a big blow. Besides having a card of average matches, the Kross situation took the energy right out of tonight.