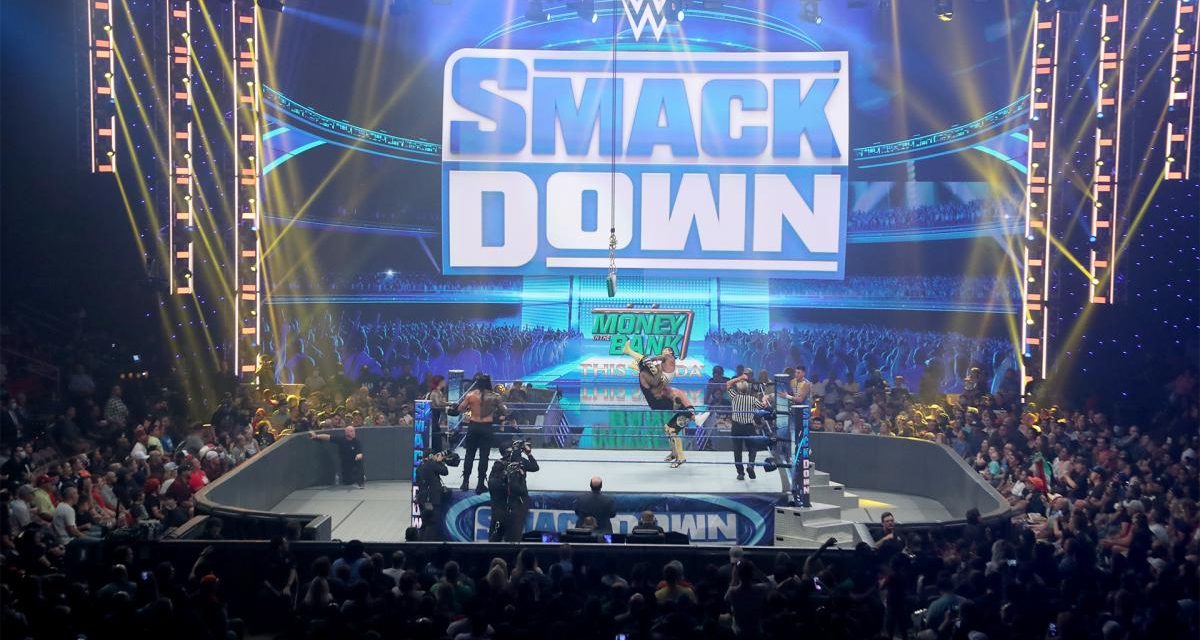 Finally the WWE Universe has returned to Smackdown! No more ThunderDome, no more video screens, no more piped in crowd noise. After 15? 16? long months, fans in Houston, Texas are in attendance. Tonight is also the final show before Money in the Bank, so expect multi-person tag matches, but I have a feeling WWE has some surprises up their sleeve for the first live show in a long time.

Mr. McMahon kicks off the show just wanting to know where the hell everyone has been?

Before the bell, Jey ambushes Edge from behind. The bell rings and Edge plants Jey into the mat. Heading into the first commercial break, Roman powerbombs Dominik off the announce table. Rey looks for a 619 and the crowd goes crazy, unfortunately Roman blocks it. Edge takes out Reigns with a clothesline on the floor. Rey goes for an O’Conner, but Jey kicks out sending Rey into the ropes. Jimmy lands a cheap shot, allowing Jey to roll Rey up and with a handful of tights get the pin.

After the match, the fight continues. Edge takes out the Usos with a chair, only to turn into a Superman punch from Roman. Reigns breaks off a piece of the chair, but Edge catches him with a spear of his own. Edge takes the broken piece of the chair and locks Roman in a crossface until he taps.

After the commercials, Kayla Braxton gets a word with Edge, who lets us know that to beat Roman he may have to go to places that he doesn’t want to. Seth Rollins is amused, laughing at him and telling Edge he can’t beat Roman. Rollins will be rooting for him, though, because it will be easier to win the title after Seth wins Money in the Bank.

Sami Zayn graces us with his presence, only to talk about his conspiracy theories. He thinks he has been intentionally left out of the Money in the Bank ladder match. Tonight, though, he has fans in attendance to stand up for him. The crowd humors him, but it’s not good enough for Sami. He doesn’t want the crowd; he wants justice. He wants to be handed the contract right now. That would be justice. Sami threatens to hold of the show. He is interrupted by Finn Balor! Finn has returned to the main roster!

Sami is not impressed and tries to sucker punch him. Finn ducks the punch and kicks Zayn into the corner. He hits him with the Coup de Grace.

Shotzi and Nox vs. Tamina and Natalya – Non-Title Match

At least WWE is keeping of the tradition of dropping the last names of NXT talent. Liv Morgan and Zelina Vega join commentary, as they are both in the Money in the Bank Ladder match. Nox with a flying cannonball to Nattie in the corner and follows up with a shining wizard. Liv and Zelina start to fight ont he floor and roll into the ring. Morgan with a flying clothesline off the step to Vega. The distraction allows  Tegan to roll up Nattie with an inside cradle and get the pin.

Winners via pinfall: Shotzi and Nox

After the match, Nattie and Tamina go after Vega and Morgan, but Morgan ends up being the last woman standing.

Carmella takes down Bianca in the corner with back elbows and makes pin, but Bianca kicks out. Belair with a spear in the corner and a big forearm to the jaw. Carmella sends Bianca into the ring post shoulder first and the champ in down on the floor. Carmella rolls her into the ring, but can’t get the pin.

After a commercial break, Bianca is taking it to Mella. She slams her to the mat and connects with a back hand spring splash. Belair drags Carmella up to the middle turnbuckle, but Carmella fights back with a head scissors off the top turnbuckle. The two trade pinfall attempts. Carmella locks in a guillotine. Bianca drops to one knee, but she fights back to her feet and counters with a vertical suplex to break the hold.

On the floor, Carmella avoids the hair whip and connects with a super kick. She can’t get the three count back in the ring, though. Carmella misses with a superkick and Belair whips her across the stomach. She get Mella up and drops her with the Kiss of Death. She covers to get the win.

Chad Gable says he can taste Otis’s victory over Cesaro tonight. Otis smells fear, but Cesaro smell some bull. Otis has full attention and takes a body shot at Cesaro, sending him to the floor.

Otis shoulders Cesaro into the corner and then hits a clubbing blow. Cesaro with an uppercut and then has to chase Gable of the apron. Otis takes advantage with a body slam. Cesaro runs Otis into the ring post and he falls to the floor. Gable hits Cesaro with a German suplex and the ref calls for the bell.

After the bell, Cesaro takes Gable for a swing, but Otis shuts the ride down. He stomps on Cesaro and hits him with a splash from the second rope.

Kayla Braxton tries to get a word with Paul Heyman about Edge. Heyman says Roman will beat the sins out of Edge on Sunday. Big E interrupts, telling Heyman that it appears Edge has a hold on Roman Reigns.

Baron Corbin sadly makes his way to the ring. He’s had a rough go of it lately. Corbin has started a crowdfunding website after he has lost everything. He wants to save his house, so he started CorbinFundMe. He may have to move in with his in-laws. All is he asking for is $100,000 from the WWE Universe.

Kevin Owens interrupts and I don’t think he will be donating to the cause. Corbin tries to Owens better side and wants him to donate. Corbin insults him as he begs, so KO shuts him down with a stunner.

At the bell, Rollins tries to leave the ring, but Big E spears him to the floor. Kevin Owens follows with flip dive over the ropes to Big E and Nakamura takes out Owens with a knee from the apron. We then go to commercial.

After the break, Big E tosses Nakamura out of the ring. He then fights KO atop the turnbuckle. Nakamura joins in and helps Big E superplex Owens. Rollins looks for a splash, but crashes and burns as Big E rolls out of the way. Nakamura knees Seth in the corner. Owens ducks a kick, but catches a spinning heel kick. Shinsuke looks for the Kinshasa, but runs right into a Big Ending. Rolling breaks the pin.

Rollins bring a ladder into the ring, crushing Nakamura. Seth tears apart the announce table and climbs a ladder. Owens pulls him down and goes up top himself. KO with a flying elbow drop from the top of the ladder to Nakamura through the announce table.

In the ring, Rollins hits Big E with a stomp onto the ladder. He covers and gets the three count.

After the match, Rollins climbs the ladder and grabs the Money in the Bank briefcase.

What a fun wrestling show. It was great to have a live crowd that filled the arena back. There was a surprise return that no one saw coming. John Cena was rumored, but he did not make an appearance. Its a shame that the main event was so short. That Fatal Four Way could have taken up half the show with out complaint. I guess WWE just wanted to give us a taste for Sunday.