Impact: Sami and Omega exchange words, everyone else exchanges punches before Slammiversary 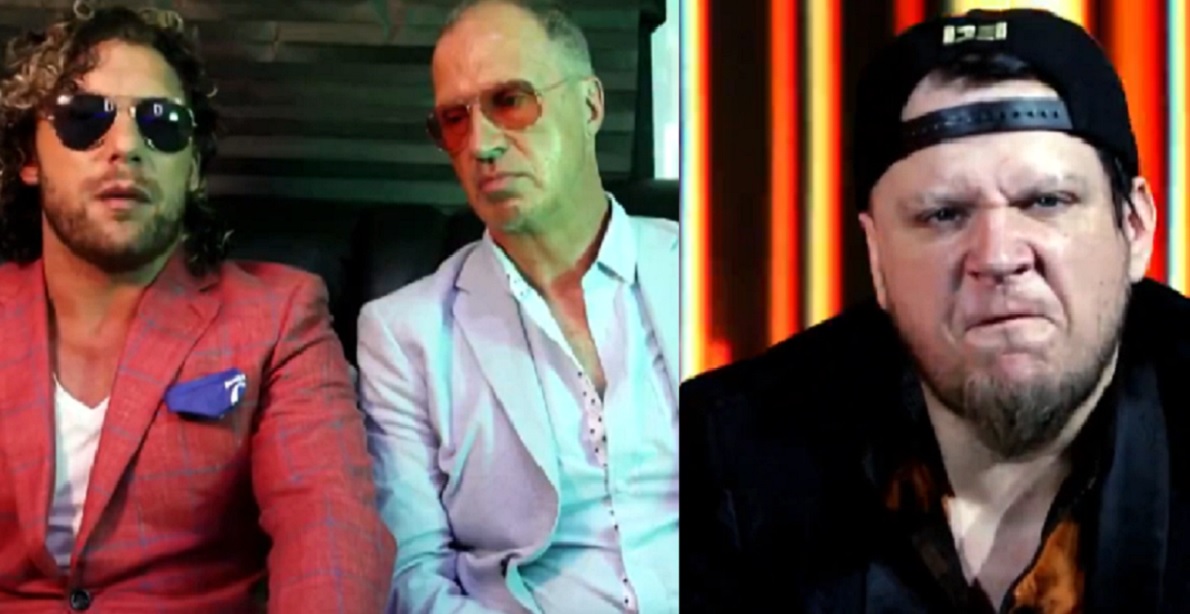 Words and fists flew freely on Thursday night’s episode of Impact Wrestling, the last one before this Saturday’s Slammiversary Pay-Per-View. Matches were added, surprises were promised, and all the major storylines and feuds were highlighted on a packed show that added fuel to the fire of what should be a hot event.

Sami Callihan started off with a selfie promo, and he challenged Omega to accept a No-Disqualification stipulation for their title match this Saturday.

Kaleb and Tenille had matching gear, which was neat. Also, kudos to the Kodak-inspired logo on Kaleb’s jacket – fitting since his whole gimmick is that he’s a photographer. Grace and Ellering were physically dominant early on, and had to stop their opponents from high-tailing it to the back to avoid the beating. After the requisite Kaleb Komedy spot (he lost his pants at some point), the match got to be really good, with some great back and forth action. One ugly spot saw Kaleb hit Grace with a Powerslam and it looked like he under-rotated and dropped her on the back of her head – she appeared to be fine, but that was scary. In the end, Grace and Ellering hit Kaleb with a Double-Team Spinning Slam to put Kaleb down for good.

This was one of the best matches involving Dashwood and Kaleb since her return. It solidifies the bond between Grace and Ellering after the teasing of their split, so hopefully that is put to bed now, and should position them as future contenders for the Knockouts Tag Team Championship.

A Sami Callihan hype video aired. He said that Don Callis was targeting him because Callis knew he was a threat to Omega’s title. This was good.

A hype video aired on Knockouts Champion Deonna Purrazzo who defends against a surprise opponent this Saturday. After that, Purrazzo was in Impact Executive Vice-President Scott D’Amore’s office to sign the contract for the match. She was irritated by Impact management for not treating her with more respect, and went on a tirade with D’Amore. She named all of the people she’s beaten, and D’Amore dropped references to the Iiconics, Laurel Van Ness (aka Chelsea Green), and Mickie James. So maybe it’s all a swerve and her opponent won’t be one of the recent WWE departees. But maybe Taylor Wilde, who’s been conspicuous by her absence for the past several weeks?

The story in this one was that Steelz was scared of Havok and was also creeped out by Rosemary who heckled and taunted her on the floor. The show went to commercial about 10 seconds after the action started. When we got back, Steelz avoided a running charge and Havok hit the buckles hard. Steelz capitalized and took over, exhibiting some nastiness and cockiness. But also shock and awe when Havok came back and hit her with a series of power moves. In the end, Steelz got caught coming off the top, and Havok planted her with a Tombstone Piledriver for the definitive win.

This was a strong performance by Havok, and certainly gives her and Rosemary the momentum going into Saturday’s title match.

The Flashback Moment of the Week was from 2013’s Slammiversary PPV, when Chris Sabin won the X-Division Championship in an Ultimate X Match.

A short W. Morrissey hype video was up next. He’s very big and very mean and very strong. And you can’t teach that.

In the back, Kimber Lee was nervously awaiting the emergence of Su Yung from the room where James Michell had taken Susan last week. But Susan came out instead. Lee was surprised, but even moreso when Susan told her she knew all about Lee’s plan. And then Susan got an evil look in her eye, grabbed Lee by the hair and threw her into the room, laughing while Lee shrieked in horror.

Herro looks like some kind of hybrid between Ethan Page, Johnny Swinge, and James Ellsworth, and the wrestling talent of none of them. He pretty much got destroyed in short order. Maclin put him in the Tree of Woe and hit a Low Running Shoulder Block, but picked him up on the pin to punish him some more.

"You're gonna quit just like everybody tried to do on me." @SteveMaclin is taking out every ounce of frustration he's ever had on his opponents. #IMPACTonAXSTV pic.twitter.com/NM6I9Kk5db

Herro tried to mount a comeback, but eventually ate a bunch of smashes and then hit the Jameson Shot for the quick and easy pin.

After the match, Maclin took the mic and cut a promo, saying he was done waiting.

They’ve done well with building Maclin up with these squash matches. Once some storylines are wrapped up at Slammiversary, hopefully they can find him a good angle and feud. In that respect, his post-match promo was timed perfectly.

Backstage, Rosemary invited Havok to formally join Decay along with her, Crazzy Steve, and Black Taurus. She said that there was one person who could formally bond her to the rest of Decay. Enter James Mitchell, who said he barely escaped with his life from his encounter with a wicked woman (Su or Su Yung?). And they all left together, presumably for some kind of induction ceremony.

A preview video aired for this Saturday’s Ultimate X Match for the X-Division Championship.

This one was a good blend of styles, from fast-paced X-Division action to the technical skills of Alexander to the strength and power of Fulton and particularly Shera. Trey took a beating for several minutes, but was finally able to escape, and then the match got really frenetic, with everyone getting in moves in rapid succession, including a Canadian Destroyer (always a highlight) on Raju. After a parade of finishers, Bey was able to roll up Shera for the win.

After the match, the eight men brawled, with Bey getting particularly unhinged, hitting all the heels with a chair, forcing them to skedaddle. After they ran off, all the faces celebrated. Until Bey unleashed his mean streak, and he Orndorffed Alexander and Petey, sucker-blasting them with the chair, until he was chased off by Trey.

.@DashingChrisBey showed the only side he's on is his own. #IMPACTonAXSTV pic.twitter.com/bcZxw1LZ57

This was a fun appetizer for what should be a really good Ultimate X Match on Saturday. Bey choosing his own side is appropriate for his character as he’s far too cocky to be a babyface.

Brian Myers approached Hernandez backstage and tried to hire him as backup when he (and Sam Beale) had to go to the ring later to tell Jake Something that he was a professional. Hernandez declined, saying that Swinger had given him a permanent gig. Myers then saw someone off-screen and asked them to be his backup instead. We never saw who it was, nor heard their reply.

Brian Myers and Sam Beale went to the ring and asked Jake Something to come to the ring. Jake was accompanied by Matt Cardona because they clearly wanted to super-saturate this segment with vanilla.

Anyway, Myers did live up to the stipulation for losing his match against Something last week, and told Jake that he was indeed professional. But then he added that Something was not, and would never be a star, and then proceeded to tell him why. From his black boots and trunks (What?) to his beard. Shoves got exchanged, and a brawl ensued. Something and Beale brawled on the floor, while Cardona took down Myers and dropped him with an Unprettier. But then someone low-blowed Cardona from behind – the angle of the shot didn’t show the move, only his reaction. When the camera panned around, it showed the low-blower to be … Tenille Dashwood?  Myers, Tenille, and Kaleb all beat down Cardona, and they posed atop his fallen body.

This wasn’t too bad, and actually adds some much-needed intrigue to the Cardona-Myers feud.

In the back, Cardona was cutting a promo against Myers when Scott D’Amore approached him. D’Amore said that he was making a match between Myers and Dashwood against Cardona and a female opponent of his choosing. It was strongly hinted that Cardona’s partner would be Laurel Van Ness (his real life fiancée).

Hernandez started off with promise, coming out ahead as they brawled on the floor. But that was short-lived, and as soon as they got in the ring, Moose flattened him with a Uranage, and drove through him with a Spear to get the pin.

.@SuperChrisSabin came *this close* to giving @TheMooseNation a taste of his own medicine. #IMPACTonAXSTV pic.twitter.com/W23YVFdvKp

This was short but effective to add some final fuel to the fire for their match on Saturday.

Another promo for the Sami-Omega match aired. Don Callis and Kenny Omega talked about how dangerous and violent Sami is.

Bahh and Mack joined forces early on to clear Doering and Gallows out of the ring, but then started slugging it out themselves. After they came to a stalemate, Doering and Gallows re-entered the ring and paired off against Mack and Bahh, fighting with them both in the ring and on the floor, even swapping dance partners a couple of times to shake things up.

For a while, it looked like they were consciously avoiding any physicality between Doering and Gallows, presumably to save that hoss battle for the PPV. But then they finally did meet in the centre of the ring and started slugging away at each other.

They collided and both tumbled to the floor, where Doering go the better of things when he avoided a rush by Gallows who instead clotheslined the ring post.

Later, Doering found himself alone in the ring with Bahh, who he hit with a Running Cross Body and a big Lariat that put Bahh down for the count.

This was a fine ending to the show, and reinforced the strong booking of Doering, while planting the seed for an eventual feud between VBD and the Good Brothers. Setting up that heel vs. heel tension doesn’t necessarily do any favours to the two babyface teams in this match, but all four are probably destined to have singles programs again after the PPV anyway.

See you all next week with all the Slammiversary fallout!

As a go-home show, this episode was pretty effective. They gave time to every match coming up on the PPV, they maintained or heightened interest in all of them (and if they can make Myers-Cardona interesting, that’s a huge win), and they even had time to set up some things to look forward to after the PPV.