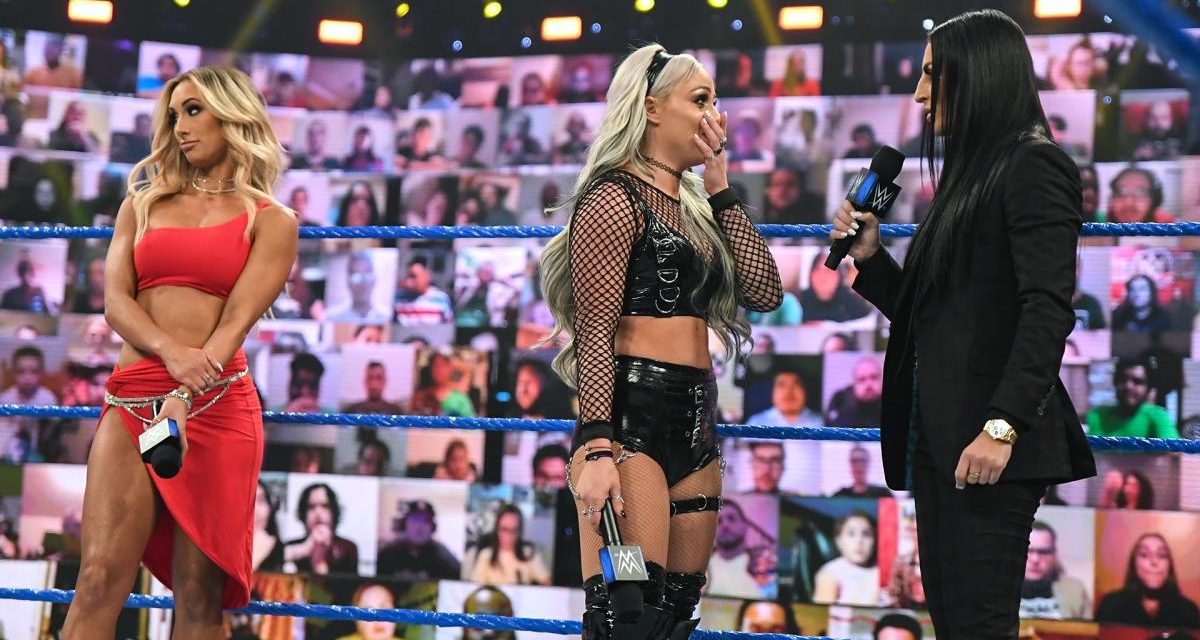 To open the show, Paul Heyman is outside of Roman Reigns’ dressing room, stopping Jimmy Uso cold in his tracks as he seeks an audience with his cousin. Heyman promises him that he will have Reigns’ undivided attention soon.

After the intro, Reigns heads to the ring with Heyman, pretends to wait through piped-in boos (come on, live crowd, you can’t come back too soon!) and admits that sure, he felt a little fear when he was in the chair-assisted crossface applied by Edge at WrestleMania, which Edge insists has the champ running scared from him. That fear, though, only propels him to greatness.

Next up, Jimmy gets his face-to-face time, and calls Reigns out for the champ not being on SmackDown last week. Out comes Jey Uso — will he back up the champ or his brother?  Jey wants to get the tag titles, and Reigns says everything could be theirs if they work together, and do it his way. Looks like that speech worked, as they all embrace.

First things first: Pat McAfee has another winning moment as he shares in a foot spa treatment with Big E, sitting ringside in a comfy couch. 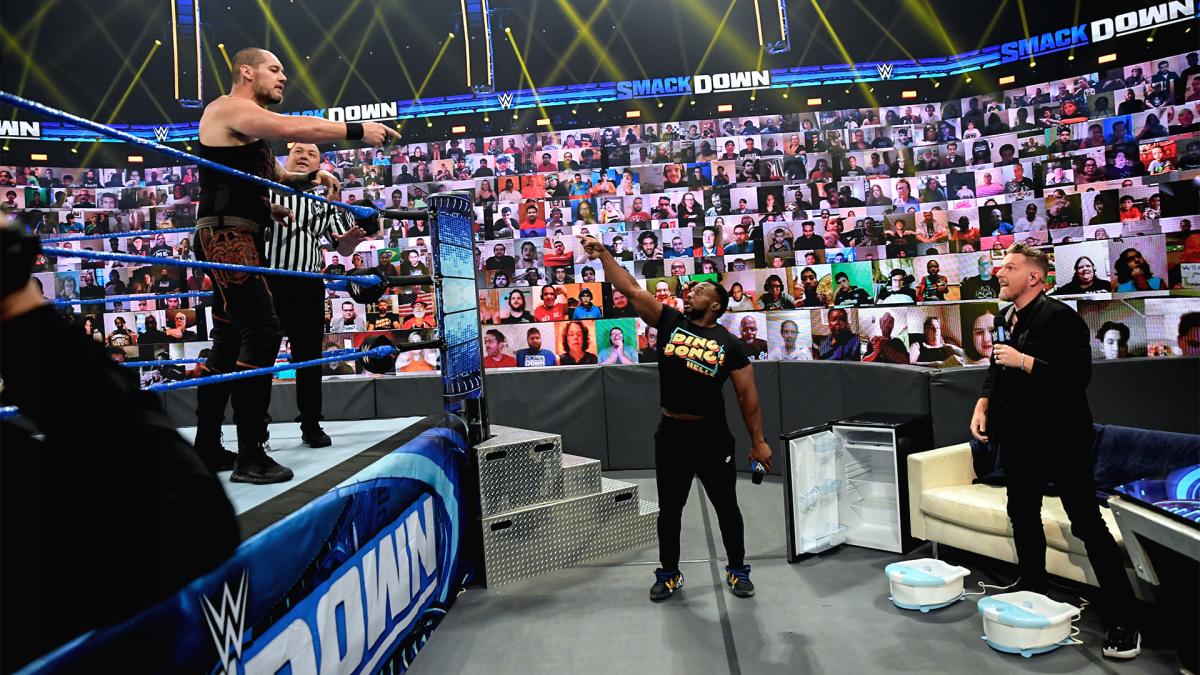 We join the match in progress as Corbin is ruthlessly throwing Nakamura around the ring before draping his midsections hard against the top rope. Nakamura gets back into the match with a jumping kick and enzuigiri, followed by a knee to Corbin’s head to get a two-count.

Corbin tries a single-leg Boston Crab, which Nakamura escapes via the ropes, then misses a shoulder-charge in the corner as Nakamura ducks out of the way. A Deep Six only grants Corbin another two-count, so Corbin sets Nakamura for a superplex. Nakamura escapes by clambering onto Corbin and is soon charging for a Kinshasa only to run right into a clothesline, but moments later another Kinshasa connects for the win.

Backstage again, Jimmy and Jey Uso put aside all of the tense talk between them lately. Natalya and Tamina are in the ring, issuing an open challenge.

Shotzi and Nox, who are referred to by only those names, show off some double-team moves on Natalya, culminating by an assisted cannonball by Blackheart. Tamina tags in and lays a beating on Shotzi with an avalanche, clothesline, super-kick to the gut, and then she brings Natalya back in. Natalya is distracted by Nox, bringing her down with a discus clothesline, and Blackheart takes Natalya to the mat with her own clothesline. Blackheart climbs to the top rope and barely hits her “Ball Pit” back senton for the shocking win. 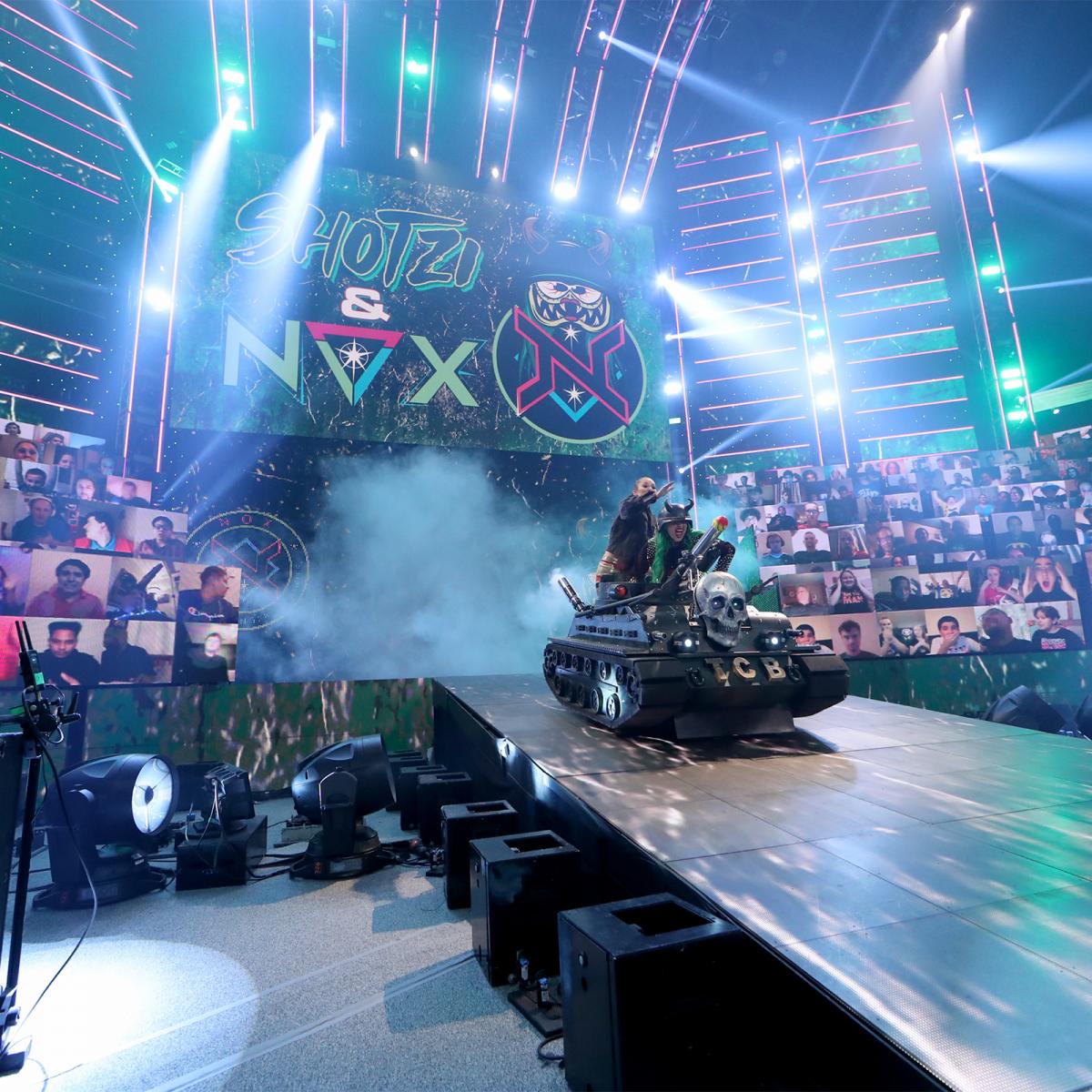 It’s funny … the tag champs were shocked, but they must have walked right past that big tank on their way to the ring, right? Photo: WWE

It’s as silly as always to beat the champ(s) and not win the title(s) – in pretty well any circumstance.

Edge gets some interview time backstage with Megan Morant, but he doesn’t want to reveal any big spoilers before calling out Reigns later on.

In the ring, Sonya Deville formally announces that Bayley is out due to injury for an expected nine months. She throws to a clip of Bayley with a knee brace on, telling the crowd she understands they’re sad to not see her compete at Money in the Bank. Actually, no, she says they don’t care, and that her injury is the fans’ fault.

Deville explains that the SmackDown Women’s Championship match has been moved from Money in the Bank to SmackDown next week, and Belair’s opponent will be Carmella. The self-proclaimed most beautiful woman in the WWE barely gets started on her acceptance speech before Liv Morgan interrupts and demands respect. Deville tells her that she cut her off before she could say that Morgan is taking Carmella’s place in the Money in the Bank match.

Bianca Belair has some words, too. She tells Bayley that she’s looking forward to finishing their business  later on, but is ready for Carmella next week.

Breaking news from Roman Reigns’ private office: Heyman informs Reigns that Edge will be calling him out later.

Seth Rollins vs. Cesaro – Money in the Bank Qualifying Match

With Kevin Owens on commentary, Cesaro shows his crazy strength in catching Rollins in mid-air, spinning him around into a backbreaker. Rollins takes a few moments to throw stuff around on the floor in a tantrum as we go into the break. Coming back, Cesaro clotheslines Rollins back to the floor, but ends up being slammed into the announcers’ table and the stairs when he follows.

In the ring again, Rollins whips Cesaro into the ropes twice, following him with a knee into his gut both times. Rollins stomps Cesaro in the corner, being pulled back by the ref to Seth’s chagrin. Cesaro hits a couple of running uppercuts with Rollins in the corner, and heads to the top rope which doesn’t quite look comfortable for him. Rollins leaps up to the top turnbuckle and delivers a superplex, but Cesaro hangs on, rolls through, and stands up, lifting Rollins into a suplex of his own. They both hit the ropes and tumble over to the floor together going into commercials.

Back again, Cesaro wants both a Neutralizer and a Sharpshooter, but Rollins wriggles away from the two maneuvers. As Cesaro pulls Seth out of the corner, the top turnbuckle pad goes with them — and guess what, Rollins uses a hurricanrana to send Cesaro headfirst into the exposed turnbuckle, but it only grants him a two-count. 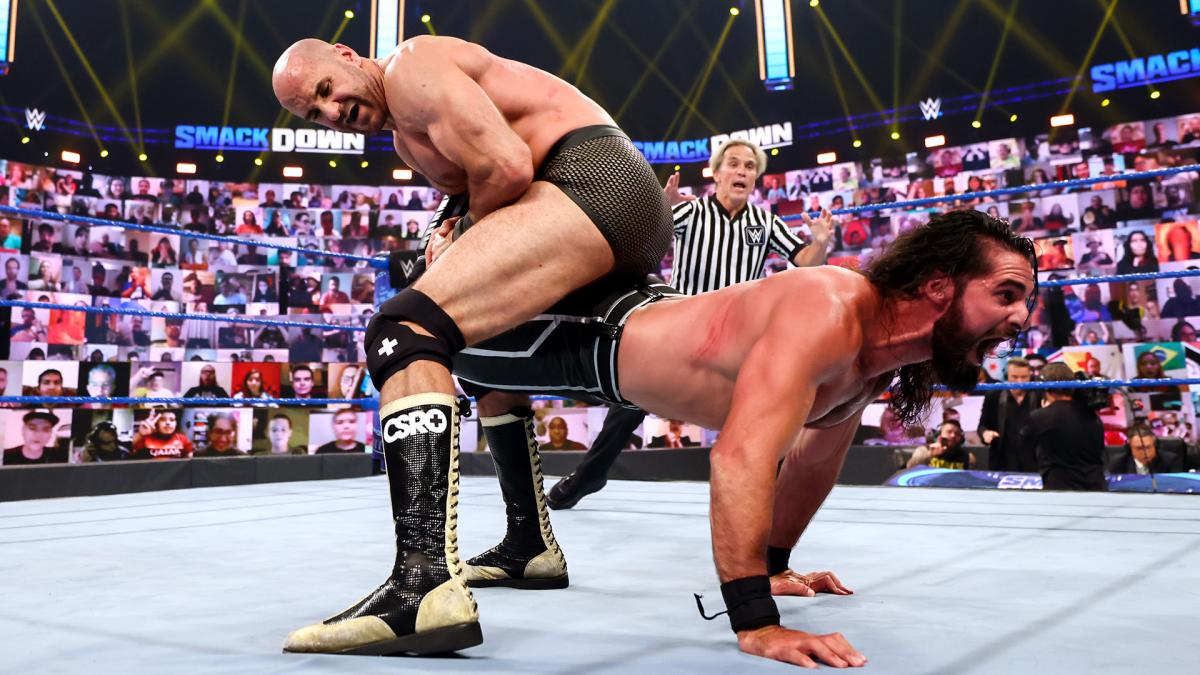 The welts on Rollins’ back look more painful than this particular Sharpshooter. Photo: WWE

With Cesaro cut open, Rollins clubs him to the floor and delivers a DDT on the steel ramp. Cesaro beats the count back into the ring, but soon afterwards takes a Curb Stomp to close out the match.

Backstage, The Usos stand outside Edge’s dressing room, waiting to ambush him. When they finally burst in, Edge is nowhere to be seen. Elsewhere, Rollins is in a celebratory mood and doesn’t notice Edge coming up from behind. Edge is not impressed with Seth..

Chad Gable and Otis have some words of warning for everyone on SmackDown: Otis will destroy anyone. That’s it.

In the ring, Edge again claims that Reigns fears him and challenges him to meet him in the ring. Reigns does, taking off his soccer coach jacket and standing toe-to-toe with his Money in the Bank challenger. Edge lashes out first, knocking Reigns back on his heels. As The Usos think about getting involved, Rey and Dominik Mysterio take them out on the floor.

As Reigns makes his escape up the ramp, Dominik hits a double-619 on The Usos while Edge delivers a spear to Jey. He grabs his now customary piece of broken chair and uses it for a crossface on Jey, then Jimmy, then Jey again, and Reigns leaves his cousins behind and disappears. 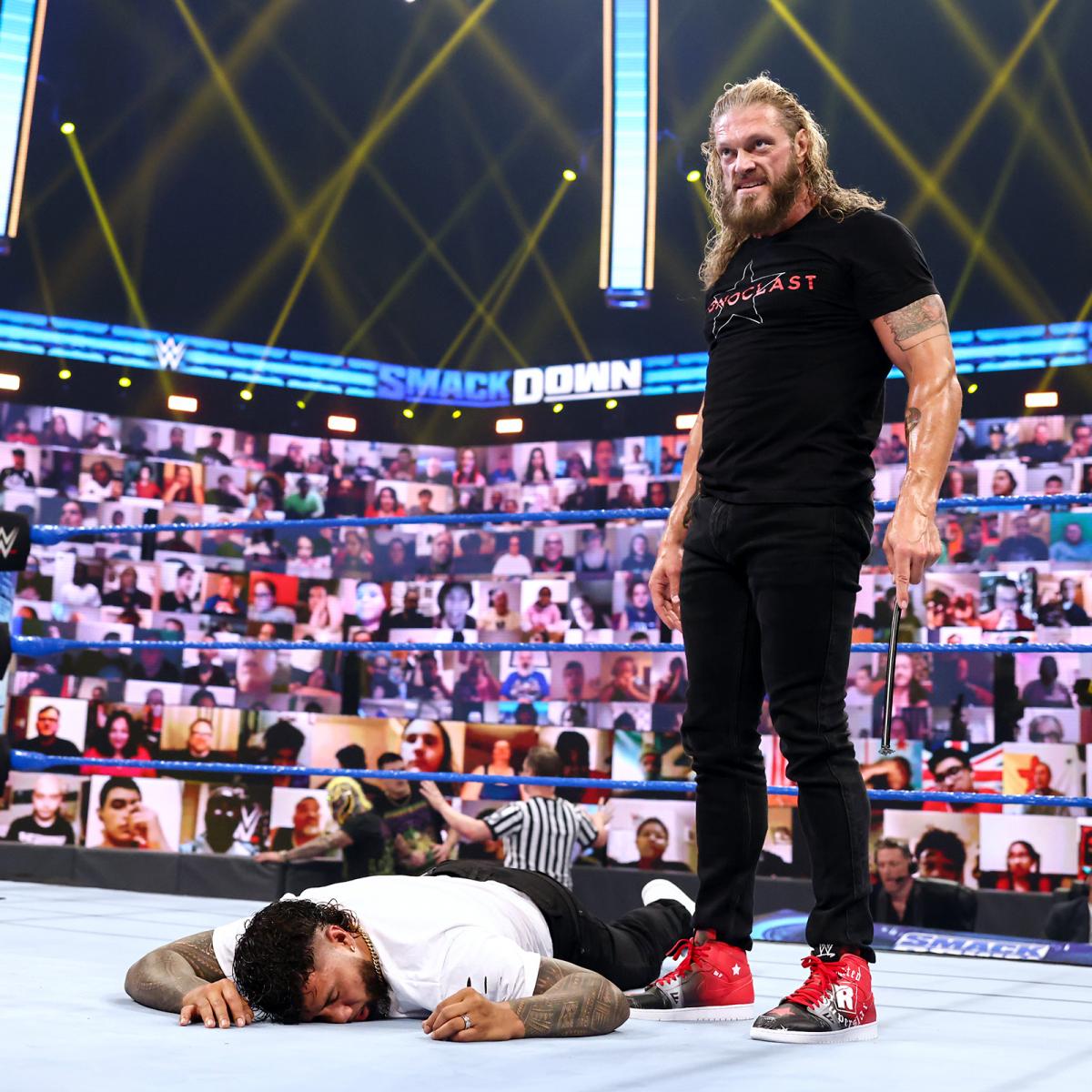 Edge once again stands tall at the end of SmackDown. Photo: WWE

A well-paced show, with a highlight match (as expected) from Cesaro and Rollins. Putting aside the now really odd inclusion of Daniel Bryan into the WrestleMania main event, the renewed build-up between Edge and Reigns is bringing the best out of both of them.