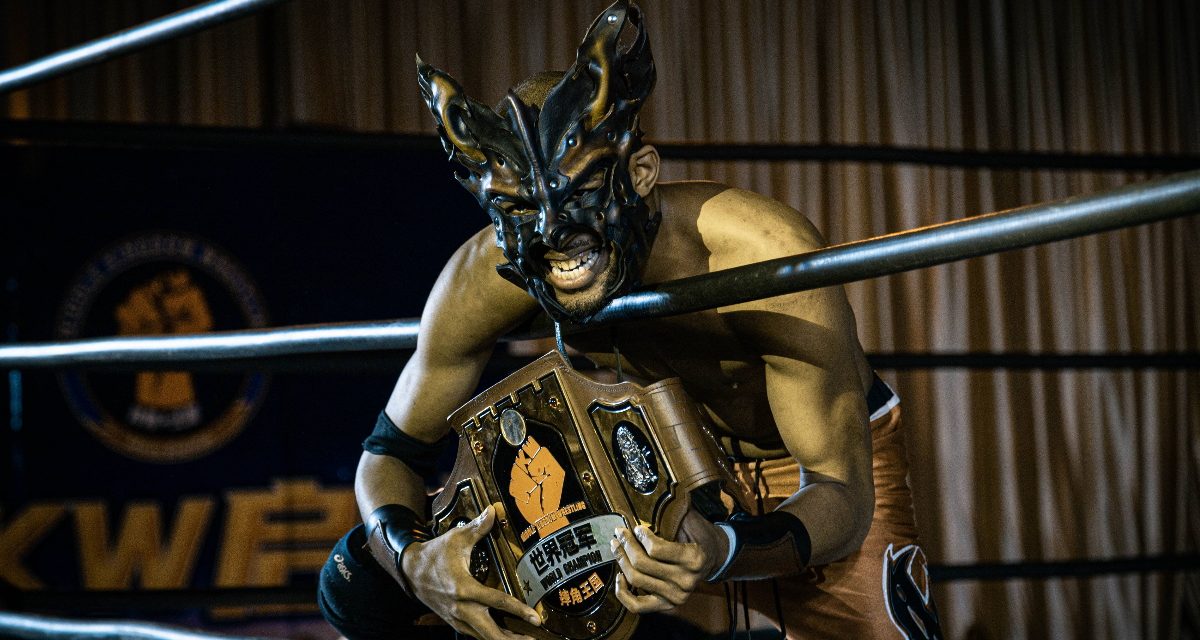 Cold open backstage promo with Wang Tao being interviewed by Jim Murray about Tao’s relationship with Team ESL partner Steve the ESL Teacher. Tao doesn’t answer the questions and just nods his head in reflective amusement, then stares coldly into the camera.

After the intro, commentator Beastface Killah welcomes us and gives a recap of last week as well as a preview of this week.

Steve the ESL Teacher enters alone and angrily summons Wang Tao. Tao enters with his own theme music and seems very disinterested. Steve says Tao is an ingrate for being unappreciative of the opportunities Steve has given him and slaps him in the face. Tao then double legs Steve and lights him up on the ground, throws him outside and beats him up there more. 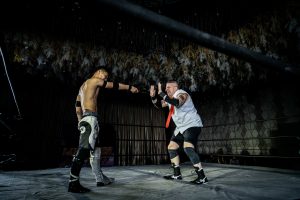 Steve ends up begging off from Tao in the ring as Tao taunts him with a beer bottle. Steve low blows Tao, spits on him and leaves.

Jim Murray now gets a follow up backstage interview with Steve. Steve says he is going to teach Tao a lesson in humility.

This is a warm up match for Dragon to test himself against two opponents before accepting the match versus The Supreme Society.

Dragon has the early advantage but the numbers game quickly catches up with him. He still shows fight despite the Mascaras being in control with quick tags. Soon Mascaras take full control.

Dragon turns things around when he sends Poseidon into Plata then hits a dropkick which causes Plata to DDT Poseidon. Things go back and forth again but Dragon overcomes both men with a whip reversal into a double neckbreaker and immediately follows up with a double dragon sleeper for the tap out win. After the match a graphic informs us that Dragon officially accepts the match versus The Supreme Society. 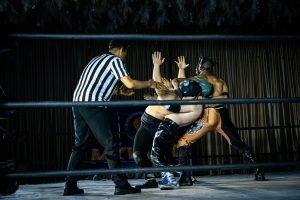 In a backstage Promo Buffa addresses his opponent later: Big Sam. He says he is going to bring New York to Big Sam.

As the match begins Buffa directs a dance toward Queen Marie who looks away.

They are evenly matched to start. After a lockup, and tackles off the ropes with no man having a clear advantage until Buffa ducks a line and hits a jumping tackle that has Sam roll to the outside. 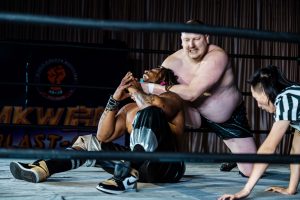 Big Sam with a chinlock on Buffa (photo courtesy of MKW)

A distraction from Queen Marie is ineffective but Sam finally turns things around by catching Buffa mid leap from the top rope with a powerslam. Sam continues to work over Buffa with rule breaking tactics and slams. A big line seems to have knocked Buffa out but he gets his foot on the rope for a break when pinned.

Buffa gains the momentum back with a dropkick that disrupts Sam’s signature snake eyes, big boot combo and follows up with a super X factor but as he attempts to pin Sam, Sam’s Stablemate Uncle Money runs out and begins to beat Buffa resulting in a DQ. 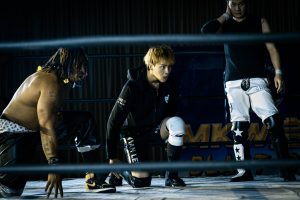 DC Chen makes the save with a superkick on Money but Ash Silva enters giving the Stable the advantage again. Things flip once more when Jyunyan Lee aids C2NY. Lee gets on the mic and issues the challenge for a six man tag.

Lee and Ash start. Ash immediately focuses on the Lee’s knee that he hurt in their last match.

The Stable takes lengthy control from the early part of the match, totally dominating Chen once Lee tags him in.

Buffa turns things around for his team by pushing Ash off the top rope illegally. Lee gets tagged and comes in hot with kicks on uncle Money.

Chen inexplicably tags in again, who again gets cut off and dominated by the Stable with a spear by Uncle Money then a Stableizer by Money and Sam while Ash guards the winning pin. 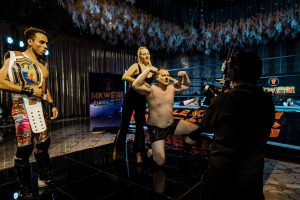 The Stable shows of as they exit. (photo courtesy of MKW)

Post-match the Stable beat down their opponents and leave them laying.