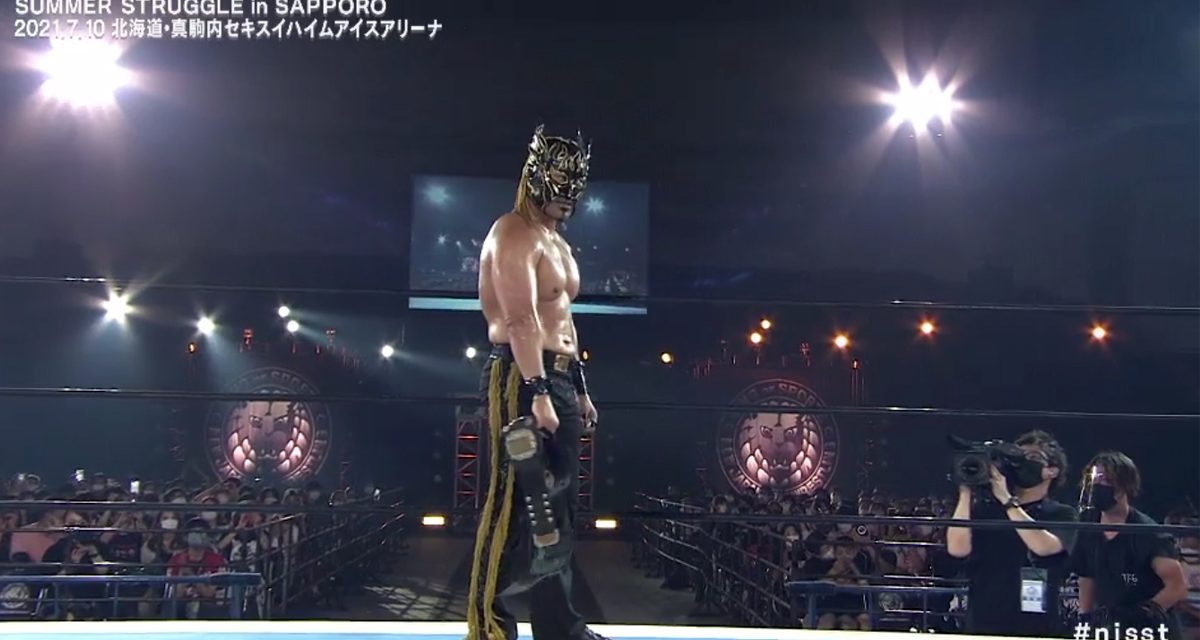 The start of the first night of NJPW’s Summer Struggle tour began with the news that Kota Ibushi is dealing with some side-effects due to his COVID-19 vaccination and is not up to wrestling on the card tonight.

As he walks by the announce desk, Desperado glares at Hiromu Takahashi who is on commentary tonight.

Ishimori focus on the left shoulder of El Desperado from the start to soften him up for the Yes Lock. He rams it into a steel post, hits it with a steel chair to cause even more damage. Desperado fires back with a knee breaker and a dragon screw leg whip which has Ishimori hobbling and ducking out of the ring.

Desperado picks up the steel chair Ishimori used on him with vengeance on his mind. Red Shoes won’t have it. He grabs the chair. Desperado shoves him to the floor complaining that Red Shoes is applying different rules to Ishimori. Desperado smashes the chair over Ishimori’s knee. Desperado shrugs his shoulders at the audience.

Back in the ring, Desperado ties up Ishimori’s knee and leg stretching it and contorting it in positions it shouldn’t be in. As Desperado attempts another knee breaker Ishimori flips over and stacks him up for a near fall.

Ishimori hangs up Desperado in the ropes and drops him hard with a running, sliding German suplex. Ishimori pulls Desperado out of the ring, lifts him up for a Bloody Cross on the steel barricade. 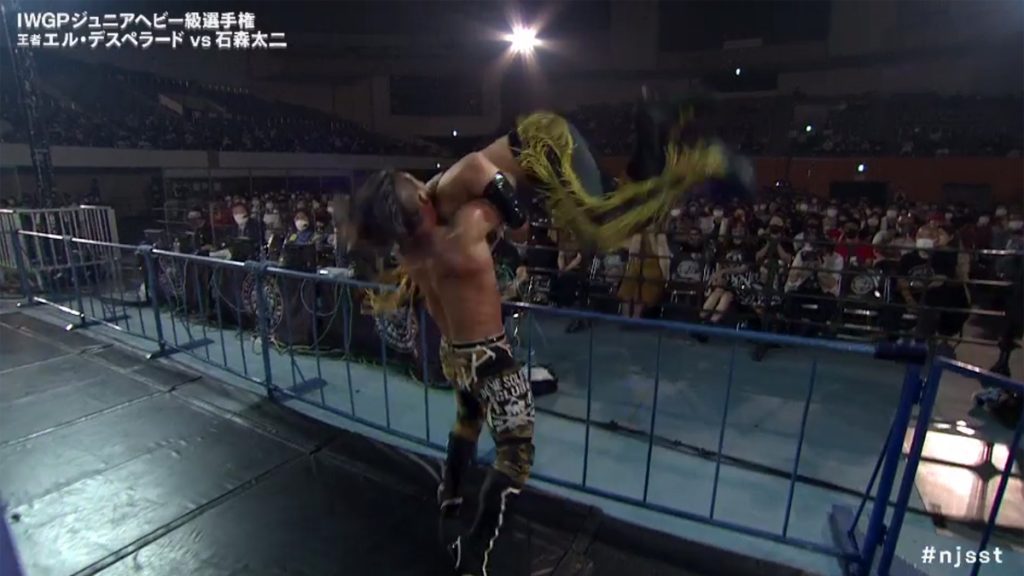 El Desperado’s fall is about to meet a sudden stop. Courtesy: NJPW.

Desperado is in such agony on the floor that Red Shoes checks on him before making the count. Desperado slides back into the ring only to get hit with a springboard 450 splash and a Yes Lock from Ishimori. Desperado barely reaches the ropes.

Ishimori and Desperado get into slugfest in the middle of the ring. Desperado has Ishimori in the Numero Dos submission. El Phantasmo rushes out from the backstage area pulling Red Shoes out of the ring and clobbers Desperado with a super kick in the stomach. Yoshinobu Kanemaru makes the save for his partner driving Phantasmo out of the ring.

Desperado retains the title by driving Ishimori into an exposed turnbuckle, clocking him with a knock-out right and two,…count them…two Pinche Locos. 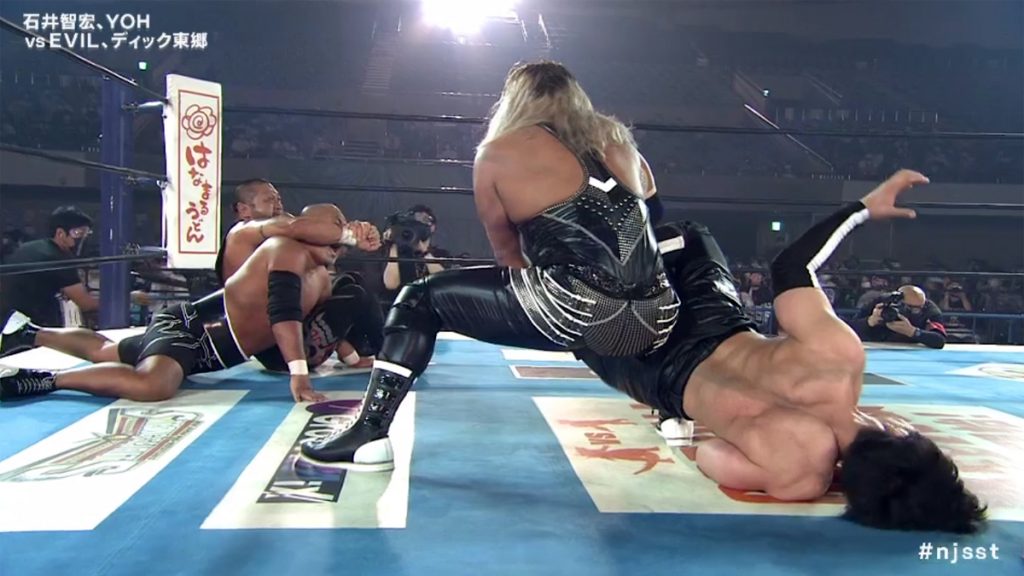 Ishii and Yoh are locked down. Courtesy: NJPW.

Ishii attacks Evil before the bell. I guess he is still pissed off over what happened on the last NJPW show. Evil and Togo resort to using chairs. Evil chokes out Ishii on the floor with one and Togo does the same to Yoh in the ring. Togo tries to strangle Yoh with his garrote on the apron but Ishii dumps him on the floor. As Togo has Ishii in a crossface, Yoh submits to Evil’s Scorpion Death Lock. Bullet Club stomps Ishii into the mat. Ishii fights back but gets laid out by the two-on-one attack.

Tanahashi and Kenta tee off on one another perhaps setting up a feud. Tanahashi pins Yujiro with a High Fly Flow. Kenta sneaks back into the ring while The Ace is celebrating with the crowd attacking him from behind. Romero and Taguchi stop the assault on their pal.

Cobb makes short work of Sho with a Tour of the Islands. Cobb mocks Okada as he checks on a decimated Sho. Cobb refers to Okada as a “Young Lion” or “Young Boy” which pisses off The Rainmaker.

The champ pins Douki with a Pumping Bomber. Sanada and Naito, The Dangerous Tekkers have words in advance of their IWGP Tag Team Championship match.