AEW Dynamite Road Rager: A kick from out of the Black, and some fire from Hangman 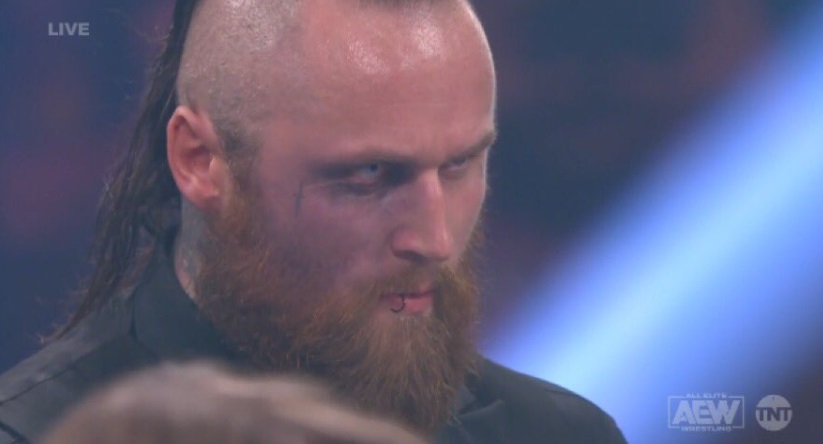 AEW Dynamite is officially back on the road. Not that far, mind you, since tonight’s Road Rager episode originates from Miami, but hey, baby steps. The tag team belts are on the line this evening, and the crowd should be extremely live, so let’s not waste time. Off to the James L. Knight Center we go, live on TNT.

OK, we’re doing this old school style, as the only way to win this is to touch all four corner turnbuckles in succession. Tradition is fun. American Top Team is well represented in this crowd, with Jorge Masvidal and Amanada Nunes taking in the action. Maybe one of them can take care of Aaron Solow … except Dustin Rhodes is on hand to assist his brother. The lights go out briefly as Cody and QT do battle, but it appears to be a real life power issue and not an angle of some sort. I’m still trying to figure out how long this feud is going to continue, but I suppose the finish of this one should tell us a lot about that. The live fans seem to like the finish, which sees Cody deliver the Cross Rhodes three times in a row before touching all four corner pads.

Shawn Spears is bragging about how he’s one step ahead of Sammy Guevara, but apparently not right at this moment, as the Spanish God clobbers him with a thrown chair. “Gotcha bitch,” Guevara says before stating that this is far, far from over.

Though Tony Schiavone wants to speak with AEW World Champion Kenny Omega, Don Callis quickly dismisses him and announces he’s got a history lesson for the fans. “You got fired,” the crowd chants in reference to his departure from Impact Wrestling, which is amusing. This promo is going the same way Omega’s segment last week did, with Callis repeating the claim that there are no more challengers for Omega’s title. That brings out Evil Uno and the Dark Order, with Uno asking why the champ is ignoring the crowd, which has launched into a “we want Hangman” chant. Omega hits him with a low blow, the Dark Order and Elite start a brawl, and Adam Page himself hits the ring, quickly sending the Good Brothers to the floor. That leaves Omega and Page alone and face to face at last. Kenny wants no part of this tonight, but you can rest assured this is just the beginning.

Poor Jim Ross has to sit down with both Ethan Page and Darby Allin, trying to get to the bottom of why there’s so much animosity between them. Allin frames it as jealousy on Page’s part, since Darby got to AEW so much faster, and while Page doesn’t deny it, he also is passionate about how Allin is undeserving and would never have made it to this point without him. They’ll continue these pleasantries next week in a coffin match.

At the risk of dating myself, I used to Nitro reports for the previous incarnation of this very site another lifetime ago, so seeing Konnan immediately takes me back. The highlight of this one is seeing Wardlow and Hager trade shots, even though we’ve witnessed that a fair amount over the past few months, and it ends soon after with FTR connecting with the Big Rig. Konnan tries to use the madball on Wardlow after the bell, but the big man shakes it off and the Pinnacle gets a few shots in on him before heading for the hills.

Winners: FTR and Wardlow by pinfall

The Good Brothers lay down what sounds like a challenge for Jon Moxley. Nay, it is definitely a challenge, with Karl Anderson gunning (see what I did there?) for Mox’s NJPW belt next week.

As Chris Jericho’s entrance theme hits for his showdown with MJF, it appears an overzealous fan rushes the ring, perhaps getting a right hand from Jericho as security hauls them away. Live crowds again, folks. After some back and forth that involves Chris saying he may have had prior relations with MJF’s mom, Maxwell sets up something like the Labors of Jericho, saying that he’ll have to win four matches against hand-picked opponents with different stipulations to get another shot at MJF. Jericho is more than up for that, but even after he signs, MJF demands a handshake to close the deal. They do, but Jericho does the classic move and pulls his foe back in, dropping him on his back with the Judas Effect.

Schiavone talks to an irritated Dr. Britt Baker, who calls out Tony Khan for putting her in a match she says no one wanted to see last week. Now Rebel is injured, but Baker is still fine, and looking forward to beating Nyla Rose in two weeks.

J.R. thinks wrestling has changed with so many factions and small groups aligning, but he may recall he was in WWE when darn near everyone was part of a team back in the mid to late ’90s. It’s smart for the announcers to put over Sydal as an experienced vet who has competed all over the world in big matches, immediately making him seem like a worthy opponent for Andrade’s first AEW bout. Andrade gets the win with his finisher, which he has named the El Idolo, but big props to the random fan who shouts out “we love you Vickie” right before the last sequence comes.

Matt Hardy and Christian Cage do the dueling promos thing, and sure enough, they’re going to fight next week in Austin on the first night of Fyter Fest. Back out in the ring, a very busy Schiavone hands the microphone over to Arn Anderson. The lights go out on the Enforcer, but is it an angle this time? Yep, that’s Aleister Black kicking AA in the face! Well, here he’s Malakai Black, and the fans are pumped to see him as he flattens Cody with a kick as well.

Earlier tonight, Ricky Starks arrived with private security, much to the chagrin of Taz. He’s going to try to wrest the FTW Championship from possibly soon to be former teammate Brian Cage next week, but not before dissing Cage’s wife so that he takes out some aggression on the security guards.

The Bunny and The Blade vs. Kris Statlander and Orange Cassidy

This is only the second mixed tag team match in the history of AEW Dynamite; you may remember that the first one featured Shaquille O’Neal. Cassidy wisely has the ref check Blade for brass knuckles before the opening bell, but that doesn’t stop him from bringing a second set into play. Unfortunately, Bunny tags herself in and prevents her partner from pinning an unconscious Orange, so Statlander tags herself in and wins the match for her team. Also worth calling out the Area 451 that Statlander hits on Blade along the way, as it’s very impressive.

Before today’s show, Jungle Boy received a trophy for being the first AEW wrestler to 50 wins. Neat. Out by the ring, Schiavone tries to interview Masvidal and Nunes but quickly gets the mic snatched away from him again. It appears American Top Team chief Dan Lambert is going into business for himself, first promoting the Poirier-McGregor bout and then running down AEW. Well, this is interesting. Who’s going to lay him out? Ah, OK it’s Lance Archer. Thanks for making this make sense.

Are jorts back in style thanks to the Bucks? Stay tuned to find out. Callis is cracking me up by continually putting over how the Bucks got some street cred on the rough and tumble neighborhoods of Rancho Cucamonga. Heh. Penta snaps me back to full attention with a wild Destroyer to Matt Jackson off the apron and through a table. Then we go to picture in picture, which stinks for a main event, and the Good Brothers get involved since there are no disqualifications. Brandon Cutler also goes through a table courtesy of Frankie Kazarian, giving the fans hope that the belts may actually change hands. Kingston has what appears to be the winning pin, but two refs take bumps so there’s no finish. The Good Brothers give Kazarian the Magic Killer, and Kingston breaks out the thumbtacks. Both teams end up feeling their bite, and Matt Jackson is bleeding from the nose. The Bucks end up putting tacks in Kingston’s mouth and superkicking him to retain their titles. Not bad at all considering the Bucks did less cheating to win than usual.

Dynamite heads to Austin next Wednesday for yet another themed episode, with night 1 of Fyter Fest set to erupt. See you in seven!

This felt like a 3-star show until the main event bumped it up by a half-star, if only because it felt so inconsistent: plenty that was great and almost as much that was meh. Besides the final match, the arrival of the artist formerly known as Aleister Black and the very beginnings of the inevitable supernova confrontation between Hangman and Omega were the high points. Fyter Fest could and maybe should be better than tonight, so that’s something to look forward to.