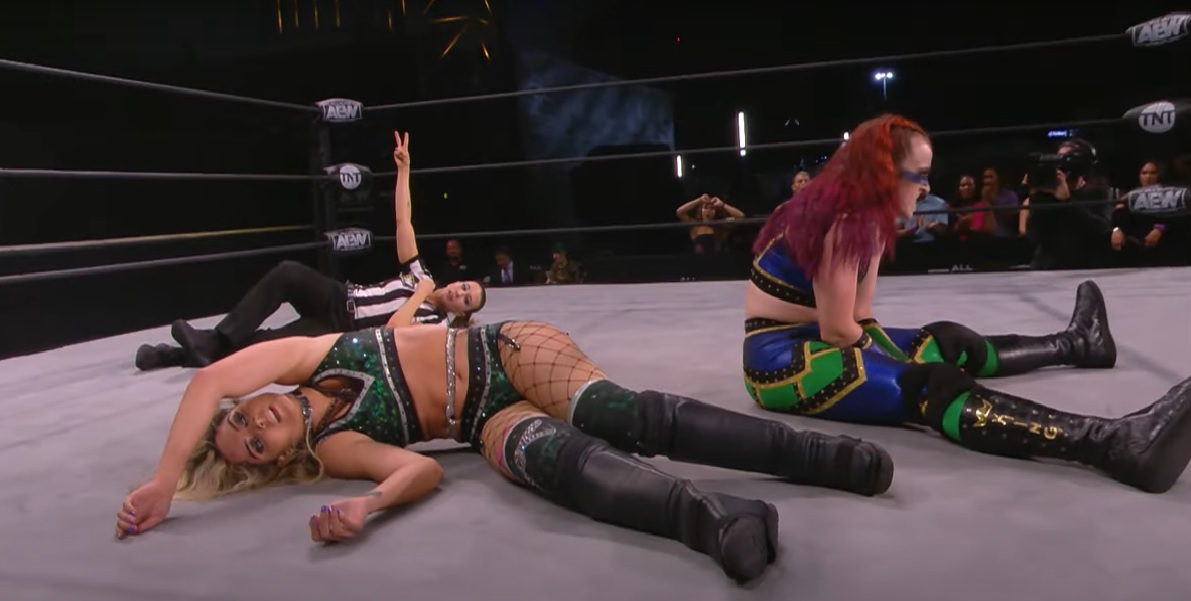 Howdy, most excellent wrestling fans, and welcome to the AEW Dark Elevation and AEW Dark recaps from July 5th and 6th.

Right out of the gate, I thought Elevation was the better show from a match and flow perspective plus, they had a live crowd which always helps. The show clocked in at just under 44 minutes. Dark on the other hand ran just under 2 hours and 4 minutes. While there were good matches on Dark, I find that the sweet spot for that show is an hour to an hour and a half. Anything beyond that becomes a bit of a chore to watch.

One of the biggest criticisms about AEW has been how weak their women’s division has been however, with the talent they are showcasing on Dark and Elevation, AEW is definitely moving in the right direction. This week’s shows were no exception as there were some good matches and performances from the women’s division on both shows. Generally on Dynamite, the women’s title seems to be the only angle involving the women but I would really like to see more storylines for the women on Dynamite. They have the talent in their roster to carry secondary and mid-card storylines on the main show.

And sticking with the women’s division, the two matches I’m recommending this week are Shida vs Dani Jordyn on Elevation and Tay Conti vs KiLynn King on Dark. Both Jordyn and King I feel have huge potential and would be great for AEW’s women’s roster.

Lastly, the line of the night went to Ricky Starks who mentioned that he had gotten into a strap match with his mom and lost. This was in reference to the upcoming Cody vs QT Marshall strap match on Dynamite this week.

1) Thunder Rosa pinned Leila Gray after hitting the Fire Thunder Driver in an absolute squash match. Gray got zero offence during the match.

2) Scorpio Sky hit a vicious looking TKO to beat Marcus Kross. Kross actually got some offence but what was even more impressive was his hair. Kross’ hair care product game is very strong. Ethan Page joined the commentary team for this match.

3) Hikaru Shida pinned Dani Jordyn after hitting the Katana knee. This was a very good competitive match and Dani Jordyn is really impressive, especially given the fact she has only been wrestling for four years. I hope the Mean Girl gets a shot in AEW.

4) Orange Cassidy pinned Anjelico with the Mousetrap Anjelico. At the start of the match, Anjelico was trying to stop Cassady from putting his hands in his pockets. Cassady also did the kicks to the shin which got a huge pop from the crowd.

After the match, Bunny and Blade come to the ring but the ref keeps them apart and gets Butcher and Blade to leave the ring.

5) Serena Deeb submitted Tesha Price with the Serenity lock. This was a strong showing for Deeb who looked great in this match.

6) Alex Marvez interviews Joey Janella and asks him about what is happening between him and Sonny Kiss.

7) In the feature match, Dante Martin beat Serpentico after hitting a flipover stunner in a very good match. During the match, Luther got some offence on Dante as Serpentico distracted ref Aubrey Edwards. After the match, Luther attacked Dante but Matt Sydal came out and made the save.

3) Waiting Room Segment with Janela and Kiss where they seemingly bury the hatchet from their mini-storyline.

4) Abadon got the leg DDT for the pin over Natalia Markova.

5) Matt Sydal got the victory over Carlie Bravo after hitting the Lightning Spiral. Bravo got some good offence in this match.

6) The Blade (w/ Bunny and Matt Hardy) hit Tre LeMar with brass knuckles while the ref was distracted to get the pin.

12) Wheeler Yuta got his first AEW victory with a surprise pin (and upset) over Ryan Nemeth (w/ the Wingmen). Even after the match, Yuta seemed like he couldn’t believe he got the pin.

13) Shawn Spears and Wardlow defeated Hunter Knott and Rosario Grillo when Spears hit the C4 on Knott. I want to like Shawn Spears but I can’t take him seriously. This crazy, angry Spears doesn’t resonate with me.

14) Tay Conti got the DDTay on KiLyn King to get the pin in a good competitive match. I’ve said this before and will say it again. I really like KiLynn King and think she has some great potential.

15) Varsity Blonde interview talking about their earlier match. Both guys seem to be getting more comfortable on the mic, especially Pillman Jr.

16) Colt Cabana,10, Alan ‘5’ Angels and Alex Reynolds got the win over Will Allday, Jason Hotch, Dean Alexander and Chandler Hopkins when 5 hit a Frog Splash on Alexander to get the pin.

17)  Jack Evans pinned Mike Sydal with a Backslide with a bridge (which was an impressive looking pin).