Monday Night Raw: Everybody’s minds on Money in the Bank 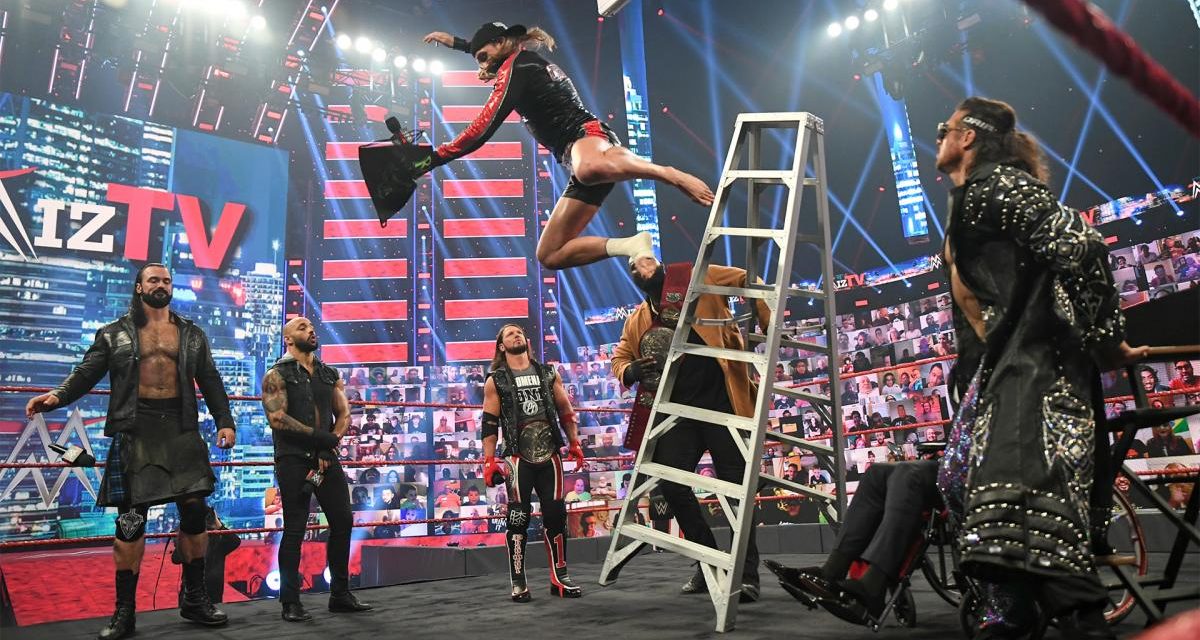 Most everyone has visions of championship contracts dancing in their heads — except for R-Truth, who continues to dream a smaller dream in the form of the 24/7 championship, and Reginald, who has whatever Alexa Bliss wants him to have in his head. It’s Monday Night Raw, so let’s get to it!

The Miz and John Morrison are in the ring with a Miz TV set, adorned in Money in the Bank garb. The Miz discusses his pick for the upcoming men’s ladder match (spoiler: it’s John Morrison) before introducing his first guest: Drew McIntyre. McIntyre admits he has grudging respect for how Miz used his Money in the Bank contract to take the title from him, but he has his sights set squarely on getting that briefcase to earn yet another shot.

Ricochet, who was a scheduled guest, makes his entrance before Miz calls him down, does a little robot dance, and makes his pitch for his upcoming victory. Same for Riddle, and then AJ Styles, as all of the participants make their way to the ring without being summoned by The Miz, to his great frustration.

After a requisite amount of trash talk, a very slow-building rumble breaks out amongst everyone, and if I had to pick who had the final spotlight upon them, it was Ricochet.

This is the fall-out from the scrap that came of Miz TV tonight, and we join the match in progress after a break. Ricochet is handling Morrison easily, with a hard clothesline in the corner and an emphatic slam, before a simple but solid set of forearms by Morrison turn the tide. Morrison catapults Ricochet’s neck up into the bottom rope, and soon after hits something like a Rude Awakening neckbreaker to focus his attack.

Richochet pops up with a headscissors take down, chasing Morrison to the floor. With The Miz bending over in his wheelchair trying to protect himself, Ricochet rolls up his back to try and land a senton on Morrison. He gets caught, though, and Morrison turns it into a powerbomb into the barricade as we go to break.

As you’d expect, this match is full of pretty spots (a standing Spanish Fly by Morrison, a satellite DDT by Ricochet), but after Ricochet dives into Morrison out on the ropes with what was maybe supposed to be a cross-body but turned into a burn-out tumble for both to the floor, The Miz blocks Ricochet from beating the count back into the ring. 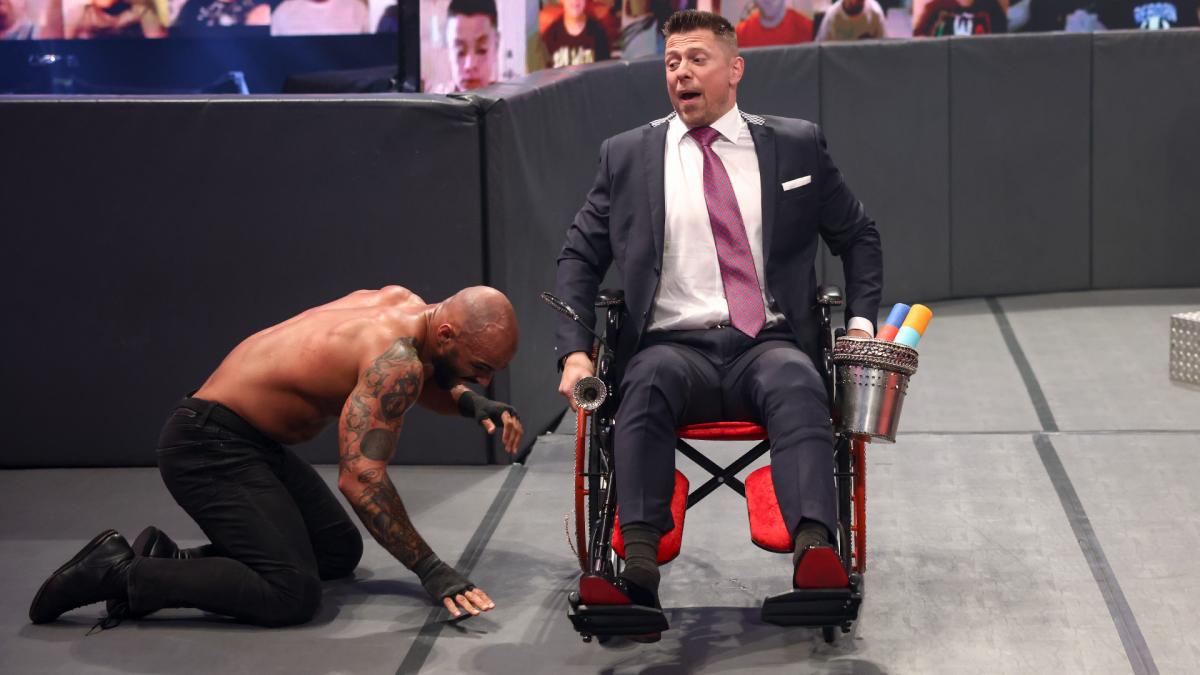 The Miz creates an insurmountable obstacle for Ricochet. Photo: WWE

Backstage, Jinder Mahal arrives on his custom motorbike to speak confidently about his match tonight with Drew McIntyre, as he looks to prove that he should be in the Money in the Bank match.

Elsewhere, Shayne Baszler and Nia Jax are looking forward to an 8-woman tag match coming up, but Reginald is distracted by seeing Alexa Bliss in a dark hallway. Or is she there? Neither Baszler nor Jax see her. But we do … oh yes, we do.

And in yet another area backstage, Nikki Cross is telling Naomi and Asuka how confident she feels about her chances going into Money in the Bank — but the other two are feeling it for themselves, too.

Ready for a mess of a match? Eva Marie starts off against Naomi, but she quickly tags in Doudrop, and about 5 seconds later everybody has taken each other out on the floor — except for Eva Marie who poses in the ring. Alexa Bliss appears behind her and screams, which scares Eva Marie to the mat.

After the break, Doudrop and Jax run into a dazed Asuka from both sides, before Jax and Baszler start double-teaming the Empress of Tomorrow for a spell. Eva Marie tags herself in, and something tells me the piped-in boos are going to be replaced by very voracious live boos in a couple of weeks. She tags out seconds later.

As Asuka tries to battle past Jax to make a tag, Bliss catches Reginald’s eye and he starts wandering towards her. Baszler solves the problem by running Bliss into the barricade. Soon afterwards, Baszler is trading armbars with Asuka when Naomi tags herself in. She rolls Baszler up for what was clearly a three count, but the ref stops counting until Doudrop arrives to break up the pin.

Everybody starts taking turns tagging in and making big moves on one another, until finally Jax plants Cross with a Samoan Drop for the win.

Backstage at a Hurt Business party, MVP explains that he wanted to be in the tag match with Lashley against The New Day tonight because Kofi insulted him.

Ali is cutting Mansoor down, telling him he’s been cutting corners, while also taking him down with an armdrag into a side headlock, all while spouting criticisms. Mansoor gets angry, hitting a reverse atomic drop followed by a spinebuster. 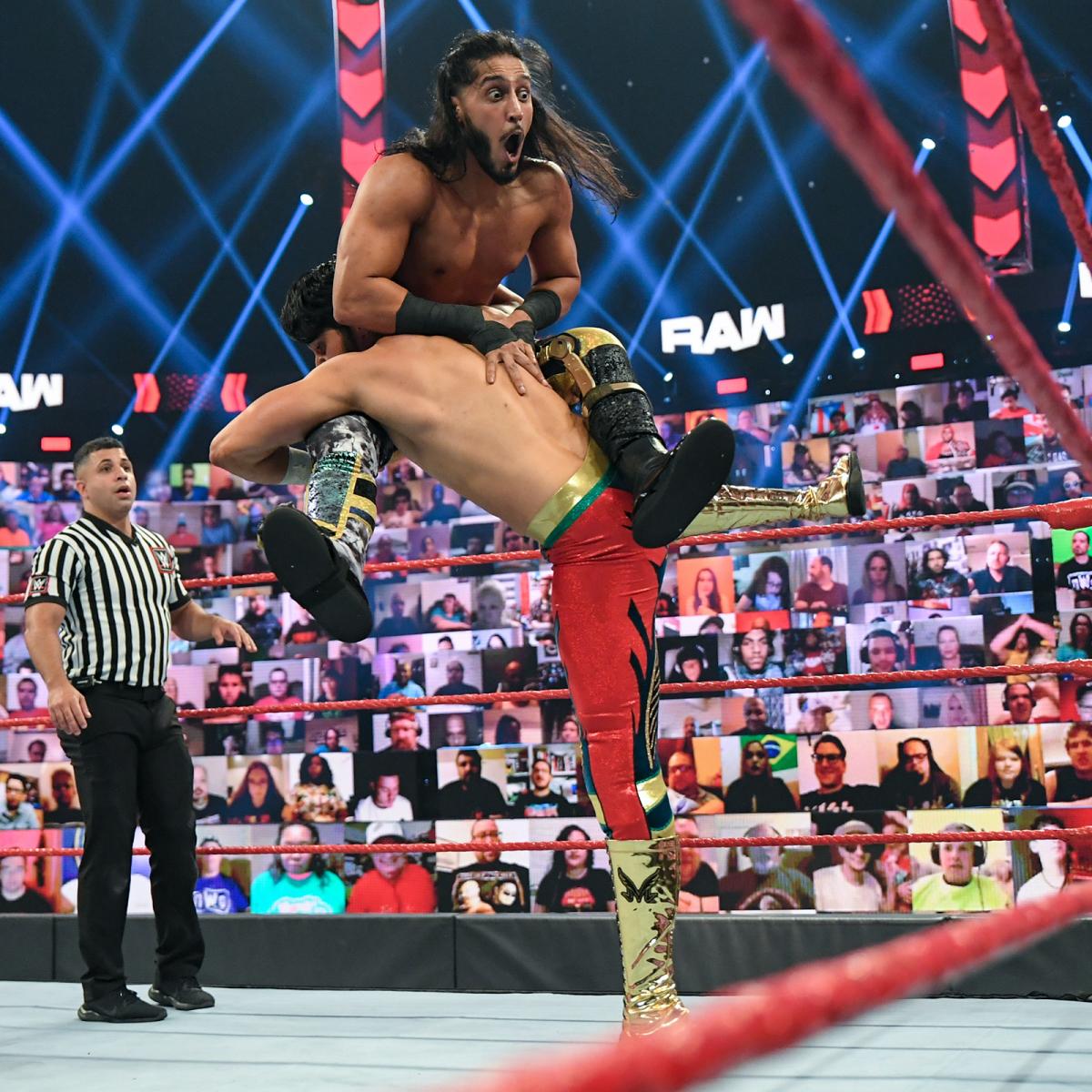 Ali looks very much the student and not the teacher here. Photo: WWE

After Ali absorbs an enzuigiri, he gets his ankle caught in the ropes. Mansoor helps him escape the tangle, but Ali uses the moment to roll him up for the pinfall.

We’re backstage again, as Drew McIntyre sidesteps a question about facing Jinder Mahal and instead tells a story about his sword being made by a tooth of the Loch Ness Monster. A steel tooth? He doesn’t make it very clear, even though it was a long story.

I always forget just how big Mahal is, but seeing him stand up against McIntyre — who normally towers over most everyone — is a quick reminder. Mahal throws McIntyre hard from corner to corner, but the Scot bounces back from one of the throws with a clothesline, then lands some real windmill punches on Mahal in the corner. A slow, powerful suplex by Mahal turns the tables again, though, as the fight goes to the floor. Another suplex lands McIntyre on the announcers’ table as we go to break.

Coming back, Mahal is in firm control, as a running knee to the jaw nets him a two-count. A series of clotheslines by McIntyre, though, continue the back-and-forth pattern — and he even throws in a little air guitar to torment Mahal. Or maybe it torments himself?

A Claymore is coming, but Veer and Shanky jump McIntyre and bring an end to the match.

After laying a beating on McIntyre after the match, Mahal grabs his sword on his way to the back. Crowns, hats, swords … what’s with all of the stealing stuff lately? 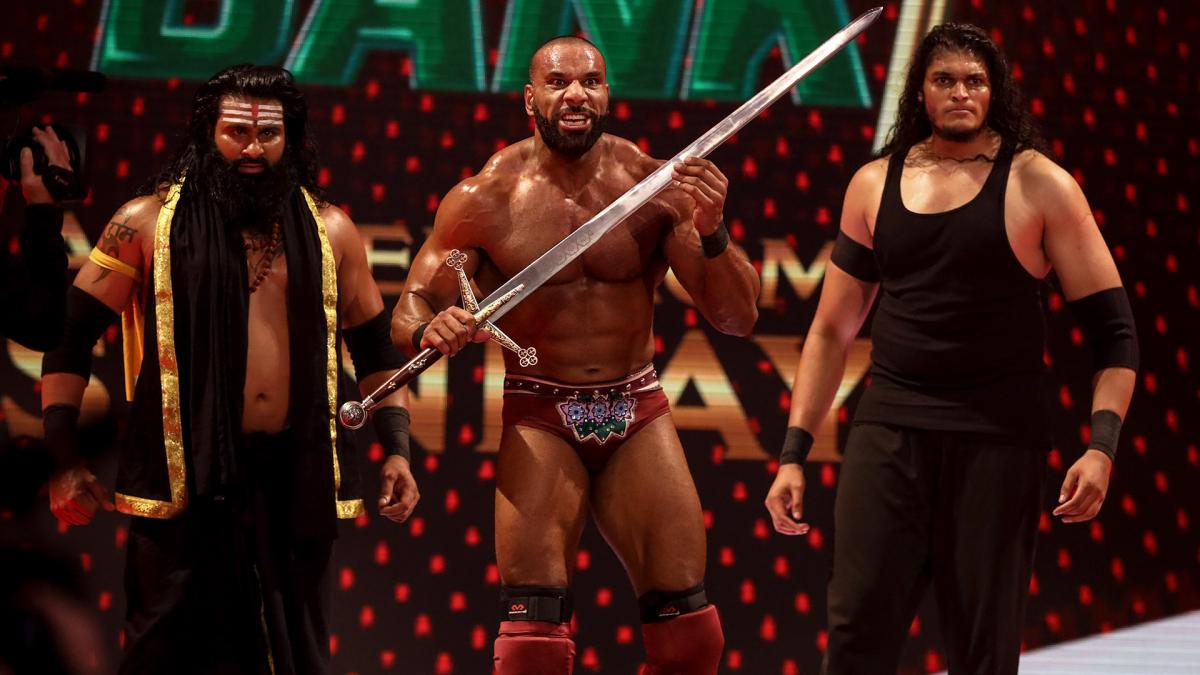 Jinder Mahal is now the King of Scotland. Photo: WWE

Kofi Kingston and Xavier Woods are pumped for their match. Kingston is especially energized and ready to claim Money in the Bank and win a second world championship.

Dorado opens with a hit-and-move offense, but T-Bar grabs him in mid-air and spins him through the air out to the floor. Mace brings Dorado back inside for some double-teaming by the two big men, Dorado nearly makes a tag, but is instead hoisted for the High Justice double-chokeslam before Metalik attacks Mace from behind. After a four-man dust-up, Dorado lands a standing hurricanrana and pins T-Bar.

Riddle is backstage with Damian Priest telling a long and winding story about doing some acrobatics at his cousin’s house. The last time I remember seeing these two together was reviewing the documentary about Q.T. Marshall.

It’s always worth asking: since this match was only made earlier tonight after these two came to blows, what was the original kayfabe plan for this part of the show? Styles and Riddle start off slowly, with Styles trying to land attacks on Riddle’s injured foot. Twists, locks, kicks — everything is zoned in on the foot.

Riddle, hopping around on one foot, sets up Ralph Macchio’s crane kick from The Karate Kid, and even though Styles sees it coming he walks right into it. Nonetheless, Styles continues his attack and Riddle spends much of the match on the mat in agony.

After the break, Styles has an ankle lock cinched in, which Riddle rolls away from, and he then pulls away the top rope as Styles was readying a Phenomenal Forearm. Riddle brings Styles into the ring with an Orton-inspired rope-hung DDT.  As Styles lines up Riddle for a Styles Clash, The Viking Raiders appear on either side of Omos. This distracts Styles enough to let Riddle roll Styles up for the win.

After a break, Charlotte Flair is in the ring with a crutch, suggesting that Rhea Ripley hurt her because she’s scared of her. On cue, Ripley hobbles down the ramp with a crutch for herself. She enters the ring and calls Flair out on being a drama queen — and both kick away the other’s crutch. They have a silly looking crutch swinging fight. 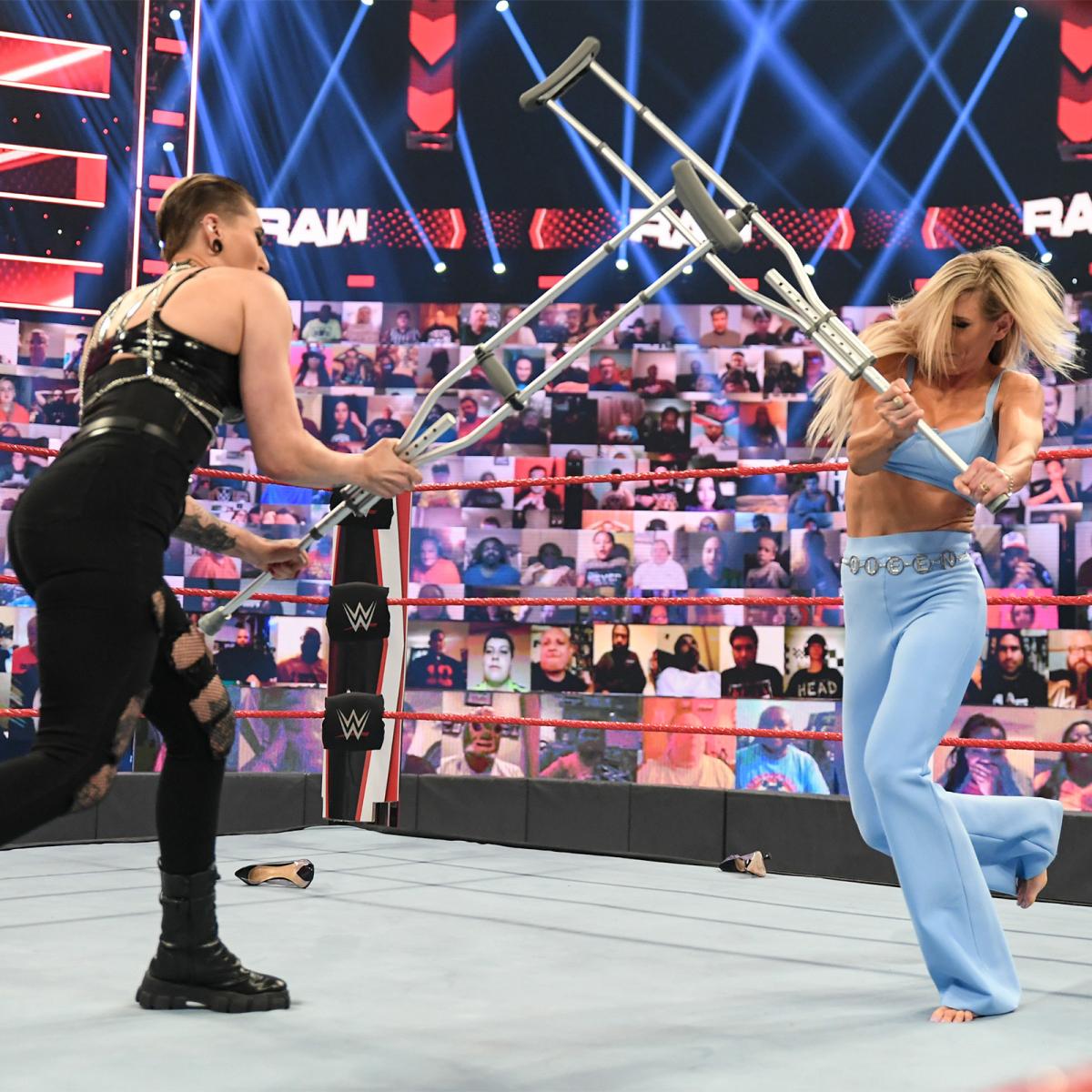 The problem with a fight like this is that nobody came close to taking a hard crutch strike. Photo: WWE

R-Truth barely enters the ring before 24/7 Champion Akira Tozawa runs into the ring, survives a pinfall attempt by R-Truth, and takes off with several wrestlers in tow – including R-Truth who abandons his partner.

In what is now a handicap match, Ryker overpowers Alexander, who tries to tag out only to watch Elias walk away from the ring as well. Ryker slams Alexander to the mat for the win.

There’s something sadly poetic about having Cedric Alexander take part in a comedy/squash match right before a main event match featuring The Hurt Business.

Woods dives and attacks MVP’s knee, then holds MVP in place while Kingston jumps in with his own targeted hit on the knee. MVP drives an elbow into Kingston’s face and wastes no time bringing in Lashley. Lots of power moves by the champ on Kingston follow, and even though he accidentally drops Kingston while trying to plant him with a sort of chokeslam, he just picks him up and does it again.

MVP comes back in and right away finds himself in trouble again, down in the New Day’s corner and taking a lot of boots to his chest. With MVP on the floor, Lashley goes to check on him and accepts a corkscrew plancha from Kingston instead.

Back from break, though, Lashley is in charge and throwing Woods around at will. MVP enters again, and delivers the shortened, less ludicrous version of the Ballin’ Elbow. Woods makes a tag and takes MVP to the mat with a bulldog, then hits what we’ll call a Ballin’ Boom Drop. MVP soon gets back up with a solid clothesline to Kingston, tagging in Lashley who chokeslams Kingston and throws Woods to the floor. MVP comes in again, but Kingston hits Trouble in Paradise on the champ before he leaves the ring. MVP sets up The Playmaker, but Kingston slips away and hits another Trouble in Paradise for the win. 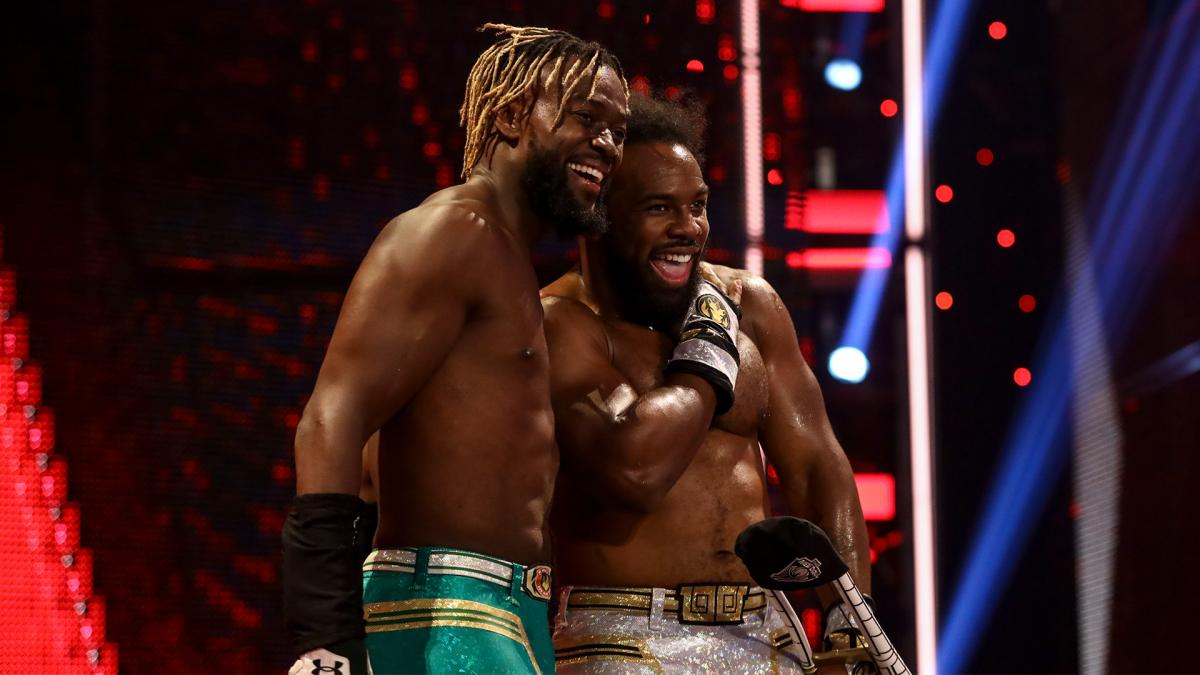 Lashley is left standing in the ring looking furious as the show comes to a close.

The show was appropriately focused on the upcoming Money in the Bank PPV in two weeks, but I still find it amazing that a three-hour show has to feature three very short matches.