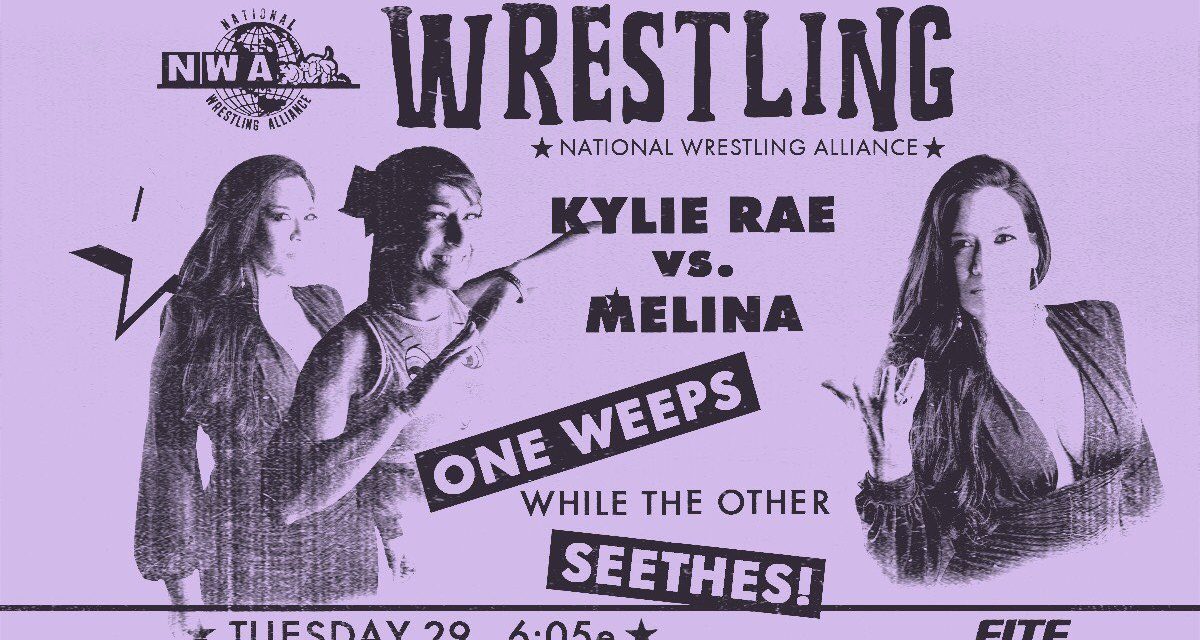 Another Tuesday night with hot wrestling action means you just stepped Into The Fire for another NWA POWERRR show.  But it starts with breaking news from Joe Galli, the thinking man’s Joey Styles, who tells the fans starting July 13th, they will begin a new show called The Champions, which will feature wrestlers in matches with a point system.  These points will then translate to who will get the chance to face against either the NWA Heavyweight Men’s and Women’s champions in Nick Aldis and Kamille, respectively.  Now before anyone snarks out on how this is similar to AEW’s “win-loss” records, I will just say keep an open mind and, to paraphrase the late great Utah movie critic, Jimmy Martin, show me what you got, NWA.  Ball’s in your court.

For now, let’s head to the GPB Studios in Atlanta, GA.  Joe Galli, Tim Storm, and Velvet Sky have the call, with your First Match of the night…. 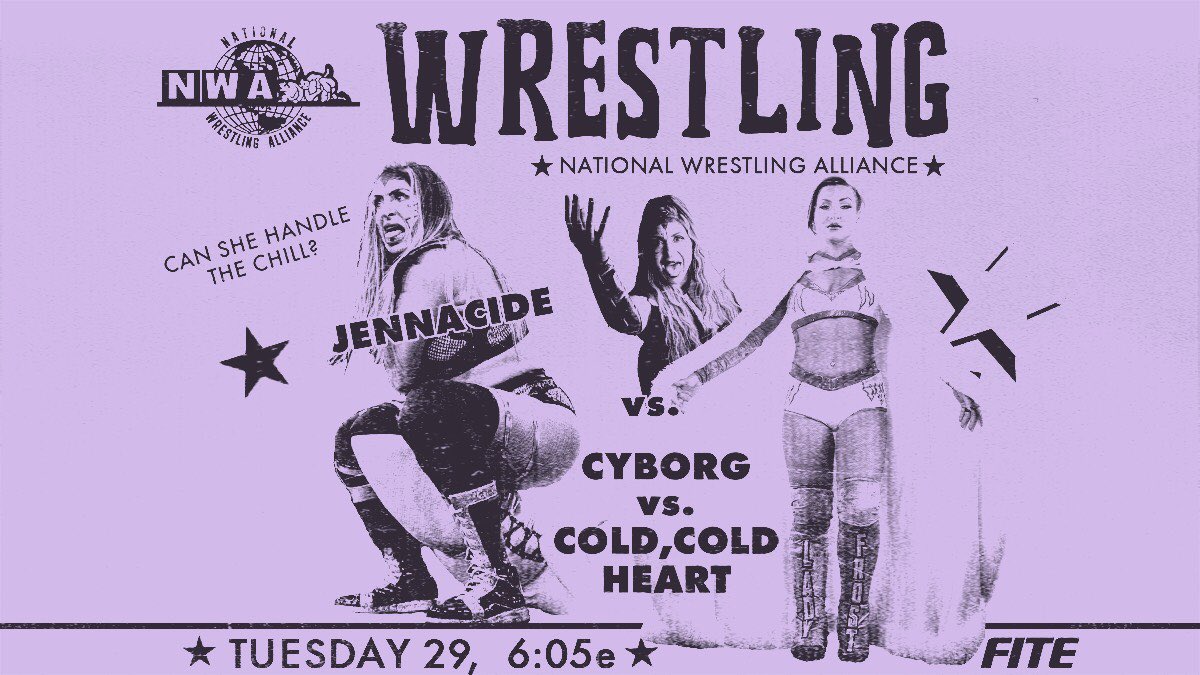 Compared to Frost’s “debut” against Terrell, this match is more physical, as it emphasized a speed (Frost) versus Power (Jennacide) dynamic.  Jennacide showed her offense early on, and had Frost’s hand clasped and she proceeds to give frost what I can describe as a one-armed snapmare.  But Frost has movies of her own, with a standing moonsault on a prone Jennacide to cover for a count of two.  Frost goes up top in the high rent district, and Taryn climbs up to distract the ref.  As the ref is dealing with this unholy shrillness, Jenna hit ropes to drop Frost back to the mat.  Now Jennacide gets Frost with an arm bar, and Frost tried to escape with a pinning attempt, but Jennacide gets to the ropes to break the hold.  But even with the crowd warming up and chanting, “Let’s go, Frosty!” (see what I did there?), it’s too much power by Jennacide and a well-placed Jenna-9000 (tombstone piledriver) give the powerhouse the three count.

We go to highlights from last week’s NWA High Voltage show on YouTube.  If you missed it:  Here it is…

Back to the ring, and May Valentine is with Sal Rinauro and Danny Deals, and she gushes over the fact that her BFF Sal got the win and the right to challenge Da Pope for the NWA Television title during the High Voltage show.  Danny Deals tries to steal the spotlight (and microphone), but Your Pal Sal, get the mic back to it’s owner.  May asks how he feels, and Sal feels this is his time.  He just needs to beat him for three seconds, so that he can be better than him.

But as much as that sounds exciting, Colby Corino blindsides him and Deals.  Still sour about the loss on Voltage, Corino steps up the violence, amid chants of “Colby Sucks.”   May yells for security, and Corino smugly responds, “What’re they gonna do to stop me?”  From there, he takes Rinauro’s carcass to the top of the ring apron and hits a scary brain buster from the ring apron to the floor! 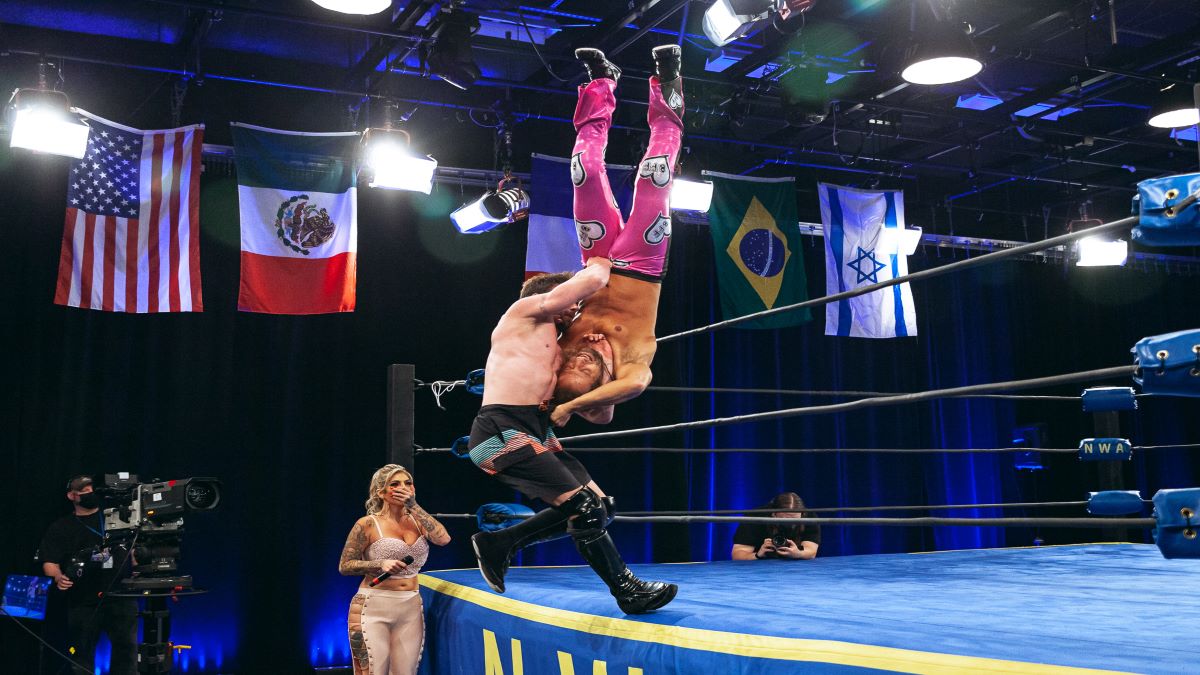 On a scale of one to El Generico, this was a brain-Bustahhhhh, folks. Now refs come out to attend to Sal.

Kyle Davis is at The Podium and says the match between Sal and Pope is now postponed. Now Tyrus and Austin Idol come out, turn Davis into a human microphone stand, and idol states this is the epitome of sports right here, and he and Tyrus are declaring war on Pope.  That leads to Da Pope coming out, wanting a match. Pope is in the ring, begging Tyrus to come in, and Idol tries to stop his client.  Tyrus is feeling froggy, but it ain’t happening.

So, no title match, eh?  No problem.  Howzabout an exhibition match with…

This is mostly a match to display the different talent on the roster of the NWA.  As Mims and Luke start off, Stevens and Kratos are chatting away in the neutral corner of the ring.  As least they’re more chummier than in past instances.  As Mims tags Stevens in (who didn’t realize he was hanging on to the tag ropes), he has a nice back and forth with Luke, until he tags YUMA in, and Luke tags in his son.  If you’re not familiar with YUMA.  He’s a small mustachioed grappler, with goggles because….I don’t know why.  Just roll with it, eh? 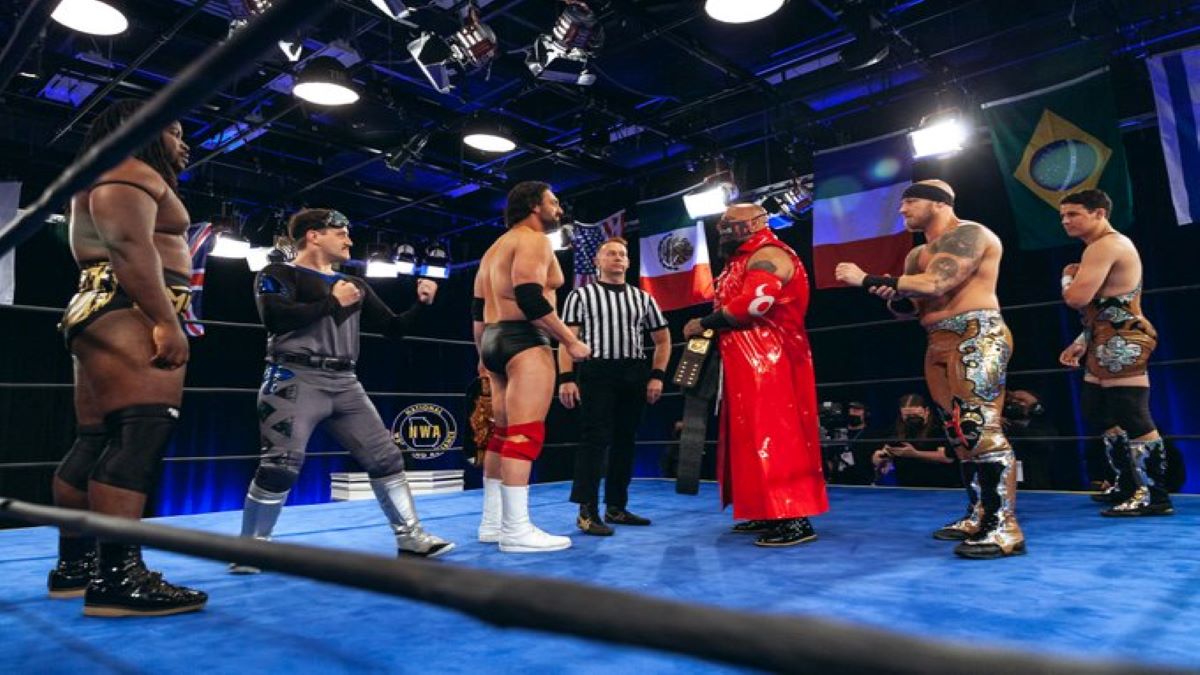 Anyways, YUMA wants to challenge Kratos, and P.J. shrugs and tags in Kratos.  From there, he just decimates the scrappy YUMA, and Kratos launches him with a suplex from one corner of the ring to the other with ridiculous ease.  This brings, and they make their way to The Podium and Bestia 666 asks in Spanish what Mecha Wolf translates in English, looking on incredulously at the teams in the ring right now. 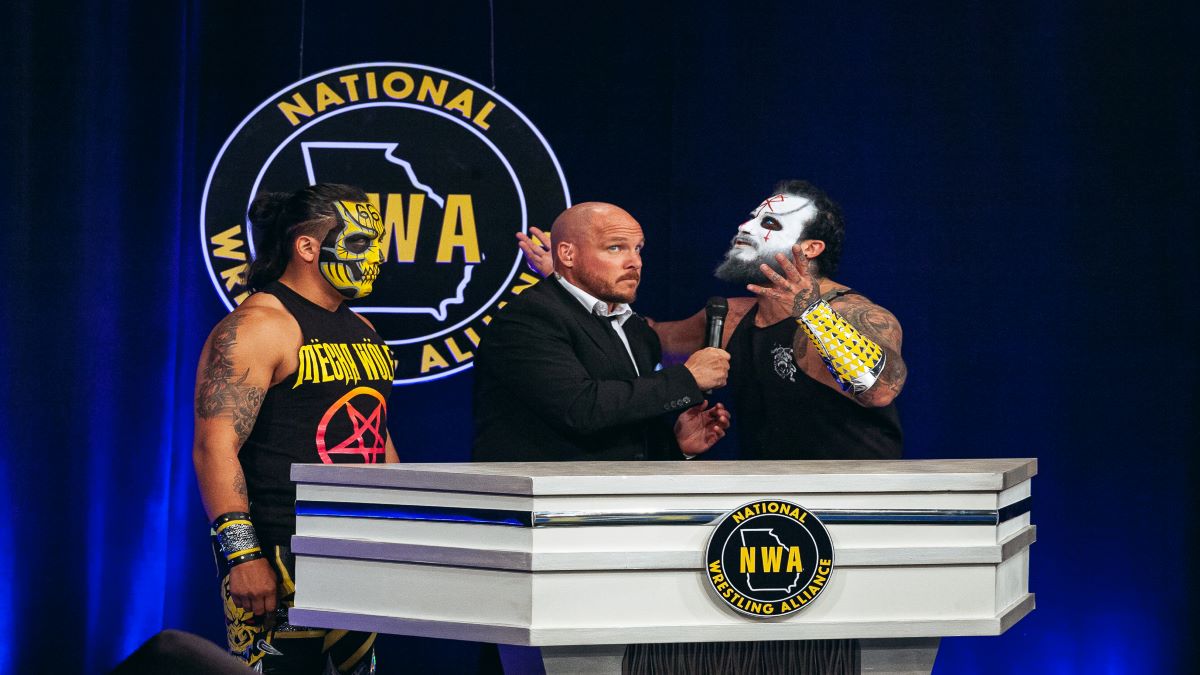 Wolf directs most of his disgust at Stevens and Kratos holding the tag titles, and assures they’ll have the titles before long.  La Rebelión take out YUMA and the ref rings the bell.

No Contest via Referee Stoppage

Stevens gets a chair to run off the upstarts, and we sure haven’t heard the last of La Rebelión.

May Valentine is backstage with Jax Dane and Crimson.  She asks Crimson why he had to up the violence with Slice Boogie, and Crimson said that he needed to humble Slice a little, and he was getting too big for his britches. 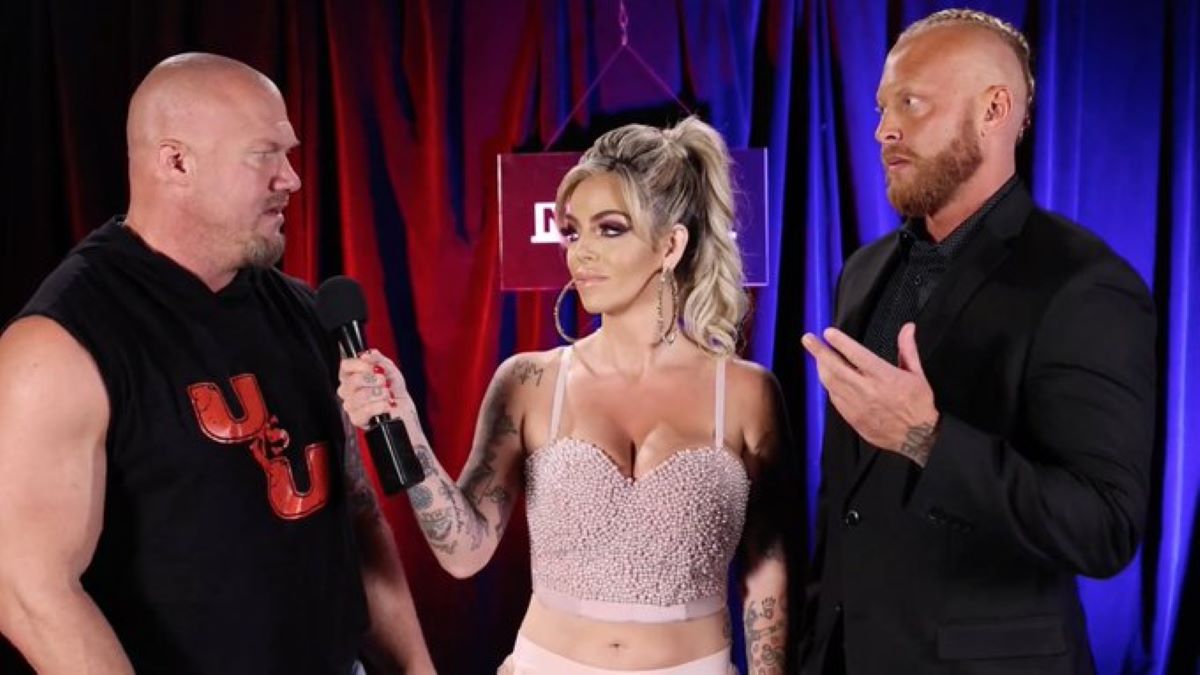 May goes to his War King buddy, and asks Dane about jumping in, and Dane acknowledges that Crimson went too far. Crimson asks why he went too far went Slice Boogie kept getting in their grill, especially as the cost of a tag match.  Dane tells “Anthony” they’ll talk later outside of POWERRR tapings.  Wow, using a real name on TV.  It’s like the fourth wall just broke…or something.

Kyle Davis at The Podium with JTG and  Chris Adonis to discuss their upcoming NWA National title match next week. JTG is close to gold, and he and Adonis are going to war. Adonis corrects JTG, and says it’s his and he has backup in Strictly Business. But waitasec…Fred Rosser comes out, and says he was about to get Atlanta turnt up, and saw this fracas, and thought he’ll back up JTG. That will happen next week, and I do not want to miss this.  Watch for yourself, and see what I’m talking about…

May Valentine with her Heart 2 Heart special, and she sits down with the Masked Man, (and I’m still sticking with The Son Of The Question Mark ™, or SOTQM ™ if we need to abbreviate). 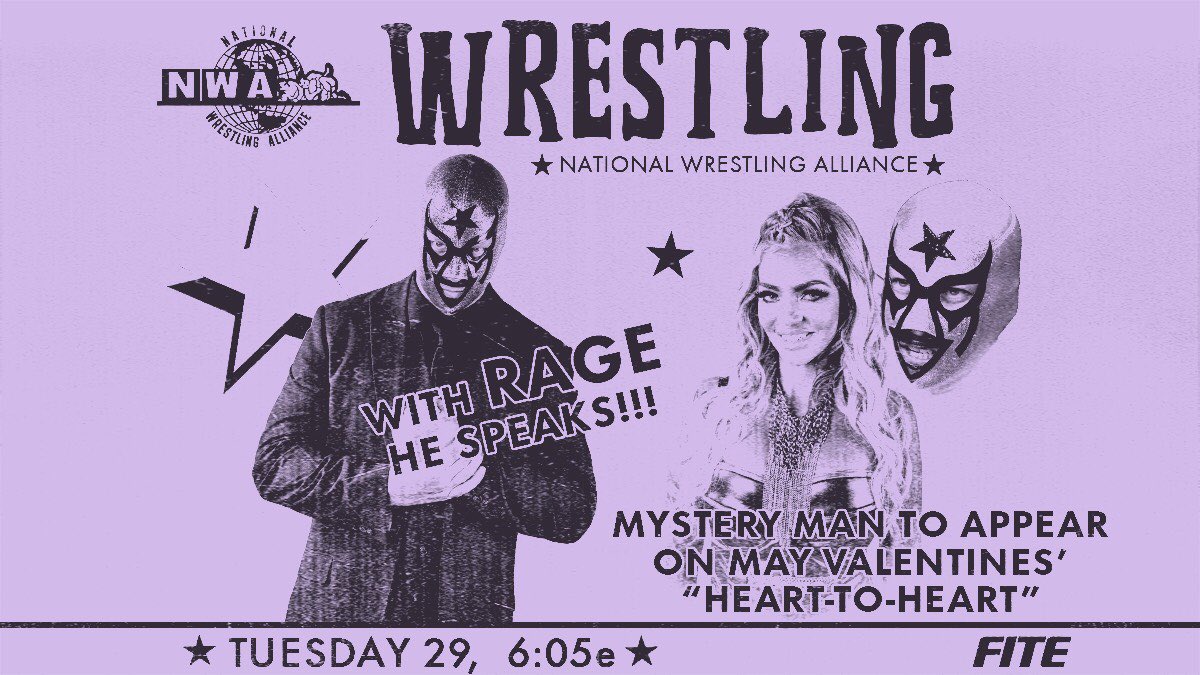 He agreed to interview and will discuss pro wrestling only. May asks him about the subject, and he says he’s spent time in the sport of pro wrestling. Why he’s here is to show love for the sport. But who he is and where he’s from is nobody’s business. May is frustrated by this, and tries to probe more, and SOTQM ™ says you’ll see best technical wrestling ever seen.

It’s interviews like this I wish I could raise the spirit of “Rowdy” Roddy Piper.  That is not a criticism of May Valentine…but, if she wanted to deliver a coconut to someone’s head, I wouldn’t be against it.

Backstage again with May Valentine, who’s now with Thunder Rosa.   Rosa has been seeing Melina growing feud with, well…everyone. Rosa has had her back, and Melina has hers, but this time, she needs to sit this one out. 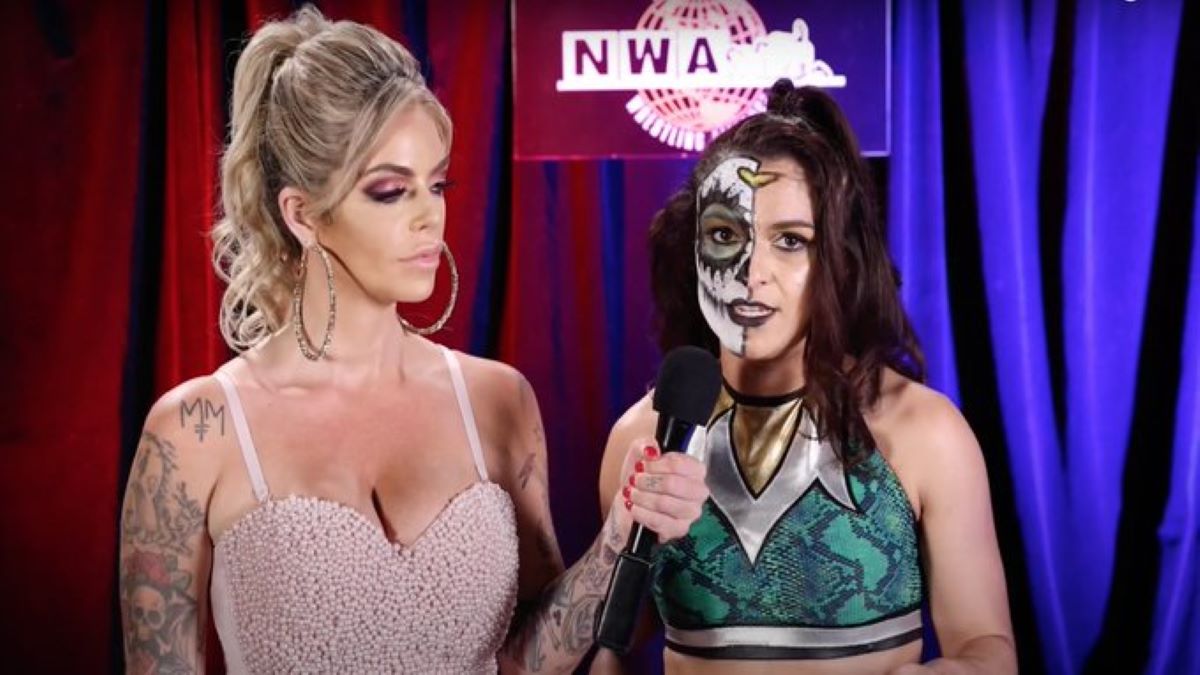 So let’s head to the Main Event of the night…

Kylie wants to be friends, and extends her hand.  Melina shoves her away, and this will be anything but sunshine and rainbows, kids.  Start of the match has some good chain wrestling and “Smiley” Kylie is getting some nice takedowns, but Melina has some skills that pay the bills.

Melina takes it to Kylie, and is vicious throughout the match in her attacks.  She gets Kylie in a standing dragon sleeper but Kylie rolls out of the movie, and tries to press the attack.  Kylie hits the ropes but get shoulder tackled by Melina, and she follows with a DDT to cover for a count of two.  Kylie Rae answers back with a couple of clotheslines to cover for another count of two.  Melina gets her into position with the dragon sleeper variation, but Kylie reverses to a super kick and that’s enough to cover for the one, two, and three. 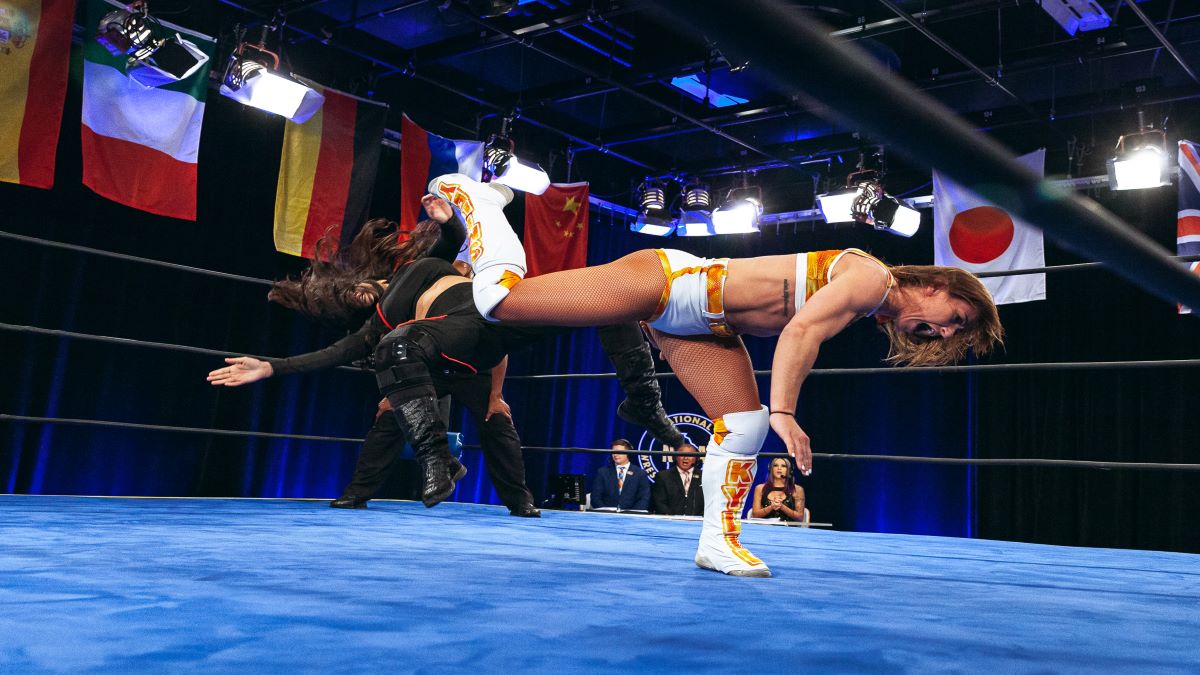 Your Winner via Pinfall:  Kylie Rae

Kylie stands in the ring triumphant as the show goes to credits.

A Solid show, with the women’s roster opening and closing the show.  Frost is a good addition to the ranks, and Jennacide is a monster in the ring, and rightly so.  It’s also good to see Kylie sshine in the ring, as well as Melina be more the aggressor, but what this means down the road remains to be seen.

And Maybe it’s me, but Colby Corino is, as we say in America, a wickedly wonderful ass****.  Must be a special skill in the Corino family, but that’s a subject for another time.  He and Sal have a feud that is tailor-made, and I want to see blood coming from those two.

As for the interviews…ehh, they served it’s purpose.  But they NWA better come up with m ore for SOTQM sooner than later.  As for the tease for the NWA National Title match….I’ll will be there with bells on, so see you in seven!