AEW Dynamite: One before the road as Dynamite closes out the Daily’s Place era 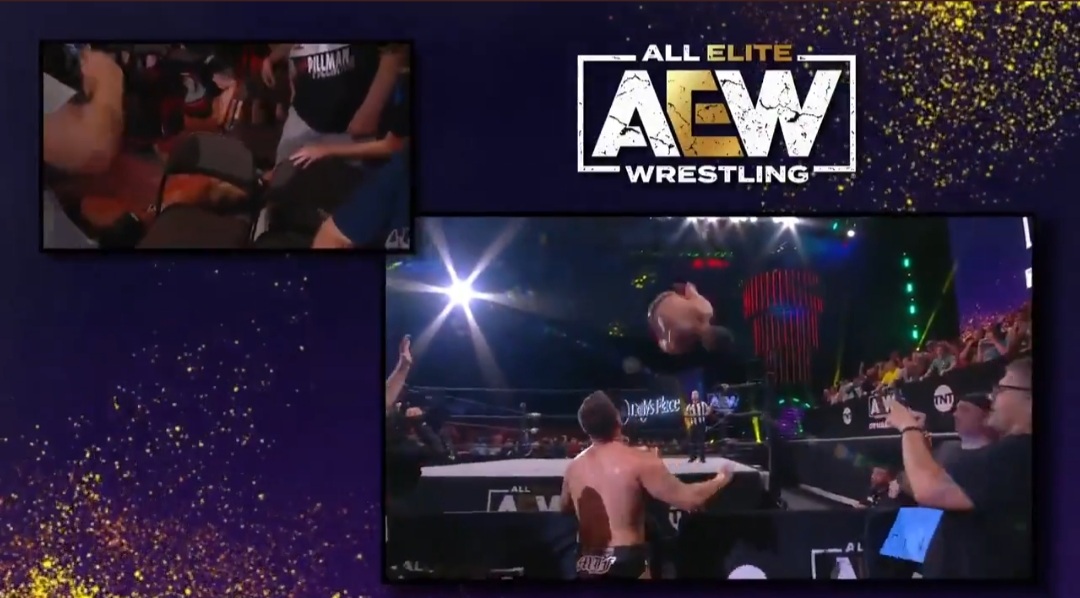 It’s Wednesday night, and you know what that means … again, at last! AEW Dynamite has returned to its normal night and time, and Chris Jericho is joining the announce team to offer guest commentary, which is always a good time. Let’s enjoy how things feel like they should once again by going live on TNT.

The Bucks have an, um, ’70s influenced look tonight. Or perhaps porn stars, as one of the announcers suggests. This is one of those weird matchups where Kingston and Penta have to beat the champs to get a shot at their belts, one of those weird wrestling conventions that I understand while not ever completely digging it. Despite their questionable sartorial choices, the Bucks are still the Bucks, surviving one very close call and taking some shortcuts along the way. Kingston makes a save just when it seems the champs have the match wrapped up, bringing the Good Brothers to ringside. They distract the ref so Cutler can use the cold spray, but he accidentally nails one of the Bucks. Frankie Kazarian takes out Cutler with a huge clothesline, Penta takes to the air to land on almost everyone, and the faces hand the Bucks a rare loss. They’ll get their chance at the gold … sometime.

Christian Cage tells Jungle Boy that everyone is proud of his amazing main event match on Saturday, and that he can make history by becoming the first AEW wrestler to 50 wins with a victory tonight. Luchasaurus thanks Cage for having Jungle Boy’s back while he was away, promising to watch Christian’s in return.

Out in the ring, Tony Schiavone gets Ethan Page’s thoughts on challenging Darby Allin to a Coffin Match, something normal people would probably not do. Page explains his goal is not to defeat Allin but to exterminate him. Nothing he’s tried so far has worked, but Page figures maybe a loss in this match will cripple Allin mentally. Sting comes out with his full entrance, but pulling a coffin behind him. Naturally, Allin is waiting inside, and before you know it, all four men are brawling. After Allin gouges at his eyes, Page complains that Darby knows he can’t beat him at 100 percent, and says their match is now off. All Ego doubles down by saying he wants Allin to put it on paper that he can’t touch Page the week before they fight, and maybe, just maybe, they can do battle at Fyter Fest.

So putting on one of the best matches in recent Dynamite history gets you a bout that gets the picture-in-picture treatment, eh? Disrespectful to Jungle Boy! Just kidding. Jungle Boy wins not long after the semi-break with the Snare Trap. The Hardy Family Office considers a post-match beatdown, but Jurassic Express and Christian Cage arrive to put a stop to that, and Christian gets in some good shots on Matt.

MJF has a big match coming up tonight with Sammy Guevara, but his promo venom is reserved for Jericho. He wants to know how low Jericho will be willing to stoop, and to that end, he’s prepared to announce his stipulations for one last match next week. MJF finally addresses Guevara by noting that fans want to see them wrestle to see who is the future of pro wrestling — and he thinks they’ll say it’s Sammy, because MJF is the now.

Hey, someone else for Abrahantes to interview: Andrade El Idolo. He’s looking forward to paying back “Matt Something” (actually Matt Sydal) for interrupting him by beating him in Miami at Road Rager. Good for you, Andrade, for getting all the correct branding in even though you’re fairly new here.

Geez, Omega is sporting some ridiculous facial hair too. Must be a theme night for The Elite. Kenny boasts that he has beaten the toughest man in AEW, the biggest merch seller in AEW and the future of the promotion, so with all challengers pretty much cleaned out, he’s looking forward to taking some time off. The Dark Order, and specifically Evil Uno, think differently about the lack of challengers, and when Omega scoffs at their lack of singles wins, Uno reminds him that someone they have befriended does: the No. 1 ranked competitor in AEW, “Hangman” Adam Page. Omega questions whether “the person you’re talking about” has the guts or confidence to challenge him, so he must bid them adieu.

Brian Pillman Jr. says his title shot at Miro is personal after the TNT champ put his hands on his partner. For Griff!

This is a big spot for Pillman, provided he doesn’t simply get squashed. OK, this isn’t really a squash, but it doesn’t last all that long before Miro retains again.

Page angrily confronts the Dark Order for doing something stupid, and he’s especially ticked that they are hinting that he’s scared of Omega. That’s not it, they say, explaining that he might be afraid of failure, but to a man, they are supporting him. You got this, Hangman.

With the tension between Team Taz at a boiling point, Hook and Powerhouse Hobbs say they’re tired of it. Taz has figured out a way to resolve it: by having Brian Cage defend the FTW belt (which I routinely forget he has) against a medically cleared Starks. Hey, Hook said something on TV, which may have been a first.

Jericho reminds us that Guerrero is not a trained wrestler and never will be, though she supposedly asked for this match. Fortunately there are other excellent wrestlers in this match, especially Baker, who makes Vickie tap out to the Lockjaw. Unfortunately, Rose gets the last laugh after the bell, sneaking in and powerbombing Baker once in the ring and then through a table on the floor. Also, here’s hoping that Rebel isn’t legitimately badly hurt, as it appears medical personnel have been checking her out ringside for some time.

Jake Hager, Santana and Ortiz are looking forward to their showdown with Wardlow and FTR in Miami. Oh man, they’re going to have Konnan in their corner next week. Let’s go!

With just over 25 minutes to go in the show, it occurs to me they might just let these two gentlemen go for the rest of the time. Not a bad way to go if they do. Certainly, when you have young talent like this, you take advantage of it. MJF tries to bring a chair into play but gets it kicked into his face, setting up the big spot: Guevara launching himself with a somersault to take out MJF on the other side of the barricade. OK, that deserves the “holy sh-t” chant it receives. Alas, hijinks are almost assured, and when Shawn Spears heads to the ring and Jericho moves to intercept him, Wardlow arrives and tosses Jericho off the stage. With the ref trying to get a handle on that whole situation, Spears delivers a chair shot to Guevara, handing MJF the win.

As the show comes to a close, Excalibur and Jim Ross thank Jacksonville for being home to AEW for the last 15 months. A montage shows highlights from the entire Dynamite run during the pandemic, a reminder of how the company persevered under some of the most difficult circumstances in recent memory. Yeah, that was a great way to end this show. See you in seven!

(Also, I love Jim Ross so I’m not even going to rib him too hard for signing off by saying “there’s nothing in your life that will top seeing a live WWE Dynamite.” Old habits die hard indeed.)

Uneven but pretty entertaining overall, this was a proper sendoff for the Daily’s Place era. It’s hard to believe it’s been more than a year since Dynamite was on the road, and during that time, Jacksonville really did feel like the promotion’s home. That said, crowds around the country should be hyped to see Dynamite in person, so the next few months should be a lot of fun.