AEW Dark and Elevation: Two Main Events and a Bunch of Good Performances 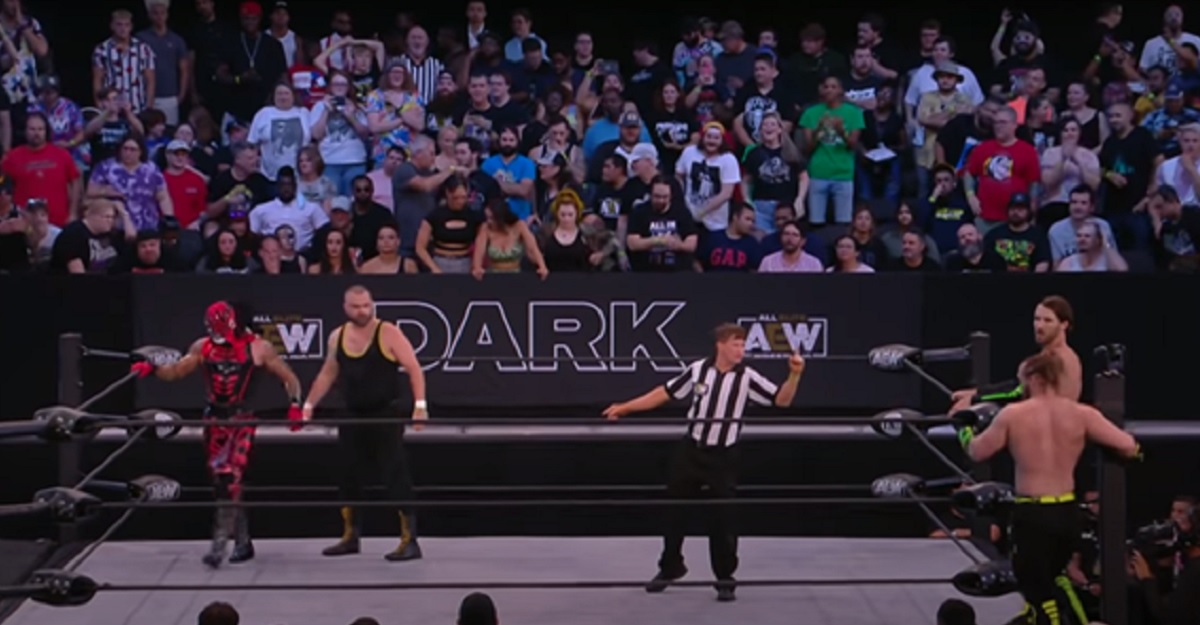 Howdy people and welcome to the AEW Dark Elevation and AEW Dark recaps from June 28th and 29th.

Both shows clocked in at just over an hour and thirty minutes and while both shows were the same length, I thought Elevation had better pacing making it an easier show to watch and overall the better show. Plus, Elevation had a live crowd that was into every match and that made a huge difference.

Easily the match of the night on Elevation was the main event of Eddie Kingston and Penta El Zero Miedo vs TH2. I’m glad to see TH2 getting some attention as I’ve always felt they were an underutilized team.

On Dark, the main event of the Dark Order vs HFO was arguably the best match but I’ll also give a shout out to JD Drake vs Kaz. Both matches had good offence and good back and forth.

A bunch of wrestlers had great performances on each show as Karl Anderson, Thunder Rosa and Private Party. However, the wrestler I want to highlight is KiLynn King who wrestled Riho. She got a lot of good offence and is someone who I think has a ton of potential. I will also give some credit to Julia Hart. While I’m not a fan of her leg drop finisher, I thought she showed some noticeable improvement this week.

At the top of the show, they showed a clip of what happened after Saturday’s Dynamite went off air. Penta and Eddie Kingston came out to save Christian Cage. Eddie then cut a promo putting over Jungle Boy, Christian Cage and the AEW roster. He also took some not so subtle shots at ‘the other channel’.

1) The Gunn Club (Billy and Colton Gunn) beat JD Drake and Ryan Nemeth when Billy Gunn hit the Fameasser on Nemeth for the pin. I’ll admit, I was a little surprised by this result as I thought they were pushing the Wingmen gimmick.

2) Penelope Ford beat Valentina Rossi with an ab-buster type move. Ford looked good in this match. Rossi is a trainee of Shawn Spears’.

3) Brian Cage (w/ Powerhouse Hobbs and Hook) beat Serpentico (w/ Luther) after hitting a Drill Claw. Tony Schiovane pushed the tension in Team Taz BUT, if I watched with the sound down, it would appear that everyone on Team Taz was cool with each other. Hobbs and Hook need to work on their facial expressions if they want to sell that story more.

4) Karl Anderson (w/ Luke Gallows and The Young Bucks) pinned Wheeler Yuta after hitting a stun gun off the top rope. During the match, the Bucks did a double superkick on Yuta while the ref was distracted. Anderson was vicious in this match and I think is underrated in this Elite faction.

5) Brock Anderson, Lee Johnson and Dustin Rhodes got the win over Adrian Alanis, Liam Gray and Justin Corino when Dustin hit the Bulldog on Alanis. While I’ll give respect to Brock who has only wrestled two matches (including this one), I think that Lee Johnson should be given a shot. He has improved week after week after week.

6) Max Caster and Anthony Bowens beat PB Smooth and Matt Justice when Caster hit the Mic Drop on Justice for the pin. I’ll give Caster’s pre-match rap a solid 7/10.

7) Riho got the win over Kilynn King after hitting the running double knees. Kilynn looked impressive during this match and even though she lost, I really like Kilynn and think she has potential.

9) Thunder Rosa submitted Katalina Perez with the Peruvian Calavera choke. Thunder Rosa showed some great wrestling, getting Perez in a bunch of holds and also hit some serious chops.

10) The Blade beat Chuck Taylor by using the ropes for the pin. During the match, Bunny distracted Taylor so Blade could get the advantage. After the match, TH2 attacked Chuck but OC came in to make the save. I’m really starting to dig the Bunny as a character. She was great at ringside.

11) Marq Quen, Isaiah Kassiday and Matt Hardy got the win over Alex Reynolds, Alan ‘5’ Angels and Colt Cabana when Private Party hit the Gin and Juice on Angels. I really like heel Private Party but I’m still not feeling this Money Matt character.

12)  Shida beat Reka Tehaka after hitting a Katana. During the match, the crowd gave a Holy Shida chant. This was a pretty competitive match and Tehaka looked like at times she might have a chance at the win.

13) In the main event, Penta El Zero Miedo (w/ Alex Abrahantes) and Eddie Kingston beat TH2 when Penta hit the Fear Factor Package Piledriver. A highlight of the match was Eddie Kingston dancing like Anjeilco and doing a running man.

1) Wardlow hit the rising knee strike to beat Baron Black via ref stoppage. Wardlow is coming along nicely and I don’t think it’s a surprise to anyone that he has some big potential.

2) Lee Johnson hits the Ushigoroshi for the pin on Vary Morales. During the match, Morales got a version of the Three Amigos (with the last Amigo being a Falcon Arrow).

3) Abadon used a leg DDT to get the win on Hyan who was making her AEW debut. I really like that move.

4) Powerhouse Hobbs hit the Town Business to beat Marko Stunt in a very quick match that was under a minute. Hobbs made fun of Stunt after the match and is really coming into his own as a heel character.

5) Lance Archer pinned Kenny Bengal after hitting the Helicoaster. Jake ‘The Snake’ joined the commentary team for this match. At the beginning of the match, Bengal left the ringside area but Archer chased after him and threw him into the ring to get the match started.

6) Tay Conti got the win over Charlette Renegade after hitting the DD-Tay.

8) Kaz submitted JD Drake with a crossface chicken wing. During the match, the Wingmen got involved to give JD the advantage but the ref ejected them from ringside. I really like JD Drake, he’s good in the ring and reminds me a little of Kevin Owens. This was a good competitive match.

9) Anjelico used a Navarro Death roll to get the tap out win over Arjun Singh. After the match, Jora Johl was in the audience and Matt Hardy once again offered him a spot in the HFO. This is a fun little storyline giving a new talent a bit of a push which I am all for.

10) Alex Marvez did a backstage interview with Joey Janella.

11) Nyla Rose (w/ Vickie Guerrero) beat Holidead with a Beast bomb in a quick squash. I’d rather see these Nyla squash matches on Dynamite to push the Britt vs Nyla rivalry especially because it involves the Women’s Title. Let’s get more eyes on the top storyline.

12) Blade (w/ The Bunny) hit the Doctor Bomb to get the win over Sonny Kiss in a competitive match. TH2 and The Bunny attacked Sonny outside the ring while the ref was distracted. After the match, TH2, The Bunny and The Blade continued beating on Kiss. Chuck Taylor and Orange Cassiday made the save. Janella came out afterwards but Kiss left the ring without him.

13) Julia Hart beat Ashley D’Amboise with the split leg drop. Hart is definitely showing improvement and it was noticeable this week. However, while I understand why she is getting the push, it does bug me that she is getting wins over wrestlers like D’Amboise or Dani Jordyn.

14) In the main event, Stu Grayson, Evil Uno and Colt Cabana beat Marq Quen, Isiah Kassiday and Jack Evans when Cabana got the pin on Evans. Great match by both teams.

15) Shawn Dean got the win over JDX with a sugar hold submission.

Thanks for checking in. C-ya next week!!