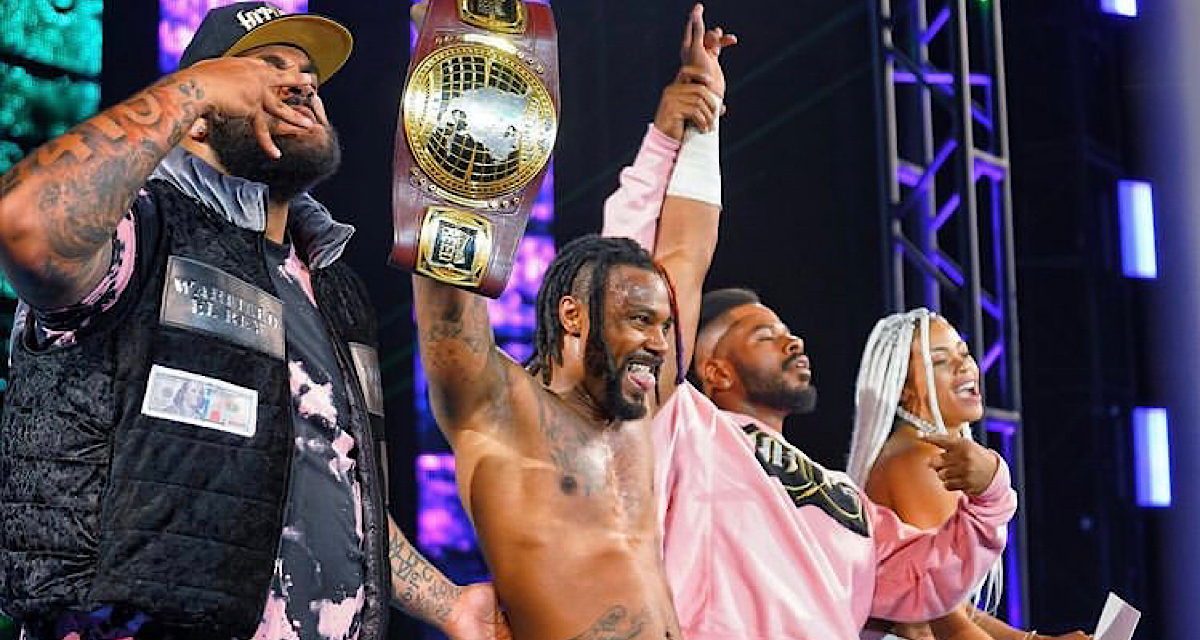 Three weeks in a row, the black-and-gold brand has offered some pretty intriguing surprises to talk about, and these shows have subsequently been solid and exciting.  I believe in bowling terms it’d be considered a turkey. Well, tonight’s surprise was that Isaiah “Swerve” Scott defeated the “Thicc Boi” Bronson Reed to become the new North American Champion, which is now probably a standout item in Hit Row’s bling collection. The group’s momentum continues to grow, especially heading into NXT’s Great American Bash special next week!

The winners of tonight’s opening matchup will face The Way at The Great American Bash for the NXT Women’s Tag Team Championships. It’s chaotic triple-threat rules as Shirai and Stark hit consecutive dives to big fanfare preceding the break, and Gonzalez takes control afterwards. The teams trade offensive strings, and the nonstop action definitely makes for an exciting watch; although the referee here is visibly inefficient. In the closing minutes, Gonzalez eats a Moonsault and Senton from Shirai and Blackheart respectively, Moon delivers the Eclipse on Stark, and Kai hits the GTK. But ultimately, Shirai again delivers the Moonsault onto Kai to gain the pinfall victory. Let’s hit the line: NXT has the best women’s division out there, and this exemplified it.

Security is on their heels as Johnny Gargano attacks the NXT Champion Karrion Kross in the back. Later on, the two exchange words inside the ring, and it seems like Gargano has finally joined the light side. But even help from Austin Theory can’t stop the champion, as once again, security and Samoa Joe intervene. It’s nice hearing actual fans again; their reception to Samoa Joe is hotter than Scarlett.

The NXT Breakout Tournament returns in July, and looking back at the original competitors in a video package, it evidently introduced a lot of names — such as the North American Champion Bronson Reed and Isaiah “Swerve” Scott. The latter and his squad, Hit Row, goad the champion into defending his title here tonight.

There’s oddly no introductory promo from Diamond Mine after their shock debut last week, but a rare singles match from Strong will do. Hale’s a great first opponent as both competitors display their technical and striking prowess, and Strong finishes it quickly with a unique double-arm submission. The mouthpiece Malcolm Bivens does grab the microphone to reiterate the group’s catchphrase: Diamond Mine is open for business.

The “to the moon” chants from the audience accompany Grimes’ new face affiliation, but Sterling takes over with some impressive agility for a wrestler over six feet. However, he misses a Shooting Star Press which allows Grimes to hit The Cave In for three. Out comes the Million Dollar Champion LA Knight to talk his signature smack, but Grimes interrupts to make a championship challenge. Knight accepts under one condition: if Grimes loses, he becomes the champion’s Virgil… wait no, his butler. Knight definitely said butler.

Backstage, Io Shirai and Zoey Stark’s parade is rained on by Indi Hartwell and Candice LeRae. Next week, they compete for the NXT Women’s Tag Team Championships.

Kyle O’Reilly enters the ring to call out Adam Cole, his opponent at next week’s Great American Bash. But before any words are exchanged, Samoa Joe appears to be a moderator of sorts. It’s the usual: Cole boasts being the star of The Undisputed ERA, and O’Reilly claims to be embarrassed by the group’s actions. The tensions are hot, and Cole misses a swing. O’Reilly catches a heel hook as Samoa Joe watches on! Security is motioned over to break the hold, but Samoa Joe walks away the highlight. The way his enforcer position has been handled is fresh and exciting, and most importantly, builds up future encounters with the likes of Cole, Karrion Kross, and Pete Dunne.

Boa of Tian Sha is wrestling for once! He, also, debuted in the 2019 Breakout Tournament but hasn’t really wrestled on NXT programming since. Instead, Xia Li has ironically become the breakout star, and her crisp fundamentals are very overlooked. As Atlas and Martinez deliver a double-team maneuver, the latter turns her attention to the throned Mei Ying. Well… Li connects with a stiff spinning heel kick and seemingly legit knocks Martinez out cold. The referee audibly asks Martinez if she’s okay, but the victim is stiff and unable to even keep her shoulders down. Smartly, the bell rings quickly afterwards. Ouch.

At The Great American Bash, the NXT Tag Team Champions MSK will defend against Tommaso Ciampa and Timothy Thatcher. They sit in-ring on steel chairs like an AA meeting, but the crowd isn’t very forgiving of the supposedly face champions. “Ciampa’s gonna kill you” chants ring aloud after a fired-up promo from “Ol’ Man Ciampa”, and MSK fails to verbally live up. Like his former partner Johnny Gargano, the NXT crowd has never fallen out of love with the bearded psychopath.

General Manager William Regal runs through next week’s card before Sarray politely interrupts. She tries her damndest to ask Regal for a matchup with Toni Storm, and the GM accepts.

In the infamous NXT parking lot, Johnny Gargano and Austin Theory choke on a sneak attack towards Karrion Kross. “Say something funny,” Kross amusingly repeats while putting Gargano to sleep. Like a disappointed tough-loving dad, Samoa Joe drags Gargano back inside.

Here’s a fresh main event with two hot midcarders, and the audience is feeling it. Big Reed seems like the favorite; the “Thicc Boi season” chants are pretty witty. The champion dominates in the opening goings and quite literally squishes the opposition in various ways preceding picture-in-picture, where Scott gains control with an apron dropkick into the barricade. The competitors trade big strikes and maneuvers to pop the crowd, but Hit Row on the outside makes the inevitable interference. However, the ginormous AJ Francis crashes through the barricade for an absolutely amazing visual. “Yo, you good?” asks Ashonte “Thee” Adonis. He and “Thee” were not good as Reed manhandles the latter over the barricade. But back inside, Scott capitalizes with a big kick and 450 Splash to gain the pinfall victory. “Swerve” is confidence! “Swerve” is champion!

Another great episode from the black-and-gold brand, and there’s a few things that I’ve gotta point out: NXT was absolutely right to capitalize on Hit Row’s potential and allure right now. Second, every segment that Samoa Joe is involved in, he kills (the good connotation). And last, I should probably mention the charger icon that’s appeared the last few weeks. It gained a “charge” of 81% by the closing of tonight’s show.