RAW: Riddle fails to come through in the clutch for an absent Randy Orton 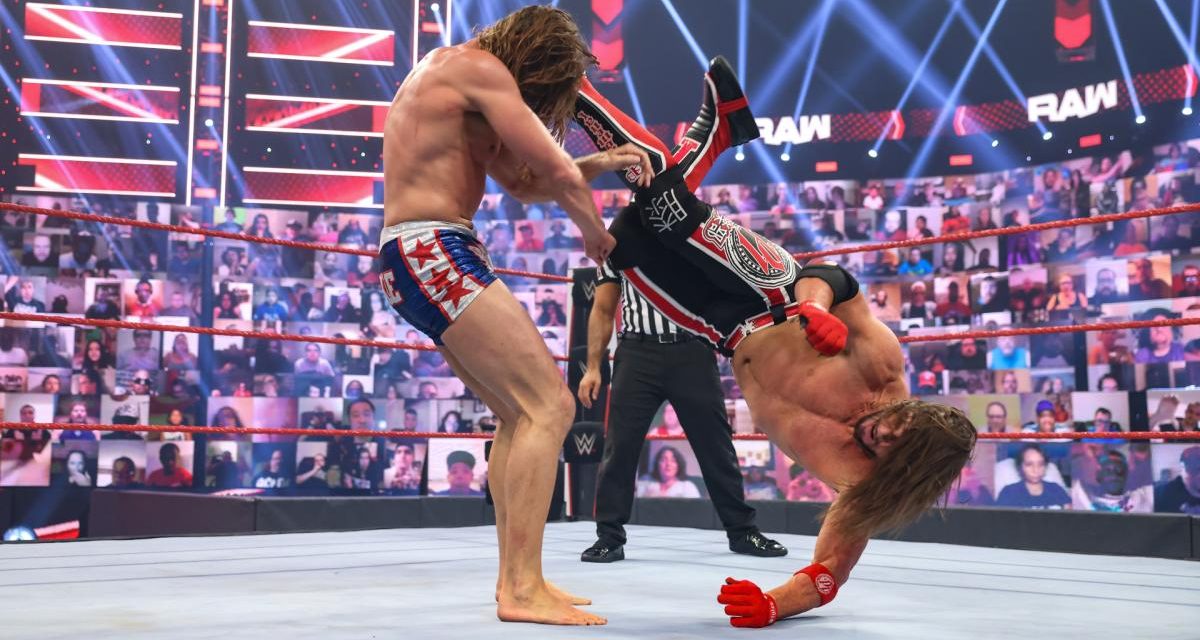 Money in the Bank is almost three weeks away and Monday Night RAW has all their spots filled except for one. And that one spot will be filled tonight. That’s not a bad thing, but what will they do to fill two more shows heading into the pay per view? We are also wrapping up our time in the ThunderDome. Let’s get to it!

We were supposed to have a triple threat match between Randy Orton, Drew McIntyre and AJ Styles for the final RAW spot in the Money in the Bank ladder match. Unfortunately, Adam Pearce tells us that Orton is unable to wrestle tonight. Sonya Deville announces that the show will kick off with a Battle Royal for Orton’s spot in the triple threat match.

Riddle runs up with a note from Randy. It’s not from Orton, but Riddle wants to take Orton’s place. They know that Riddle wrote the note, but Sonya is intrigued and will let Riddle compete on Orton’s behalf.

Battle Royal –  Winner goes on the Money in the Bank Qualifier

This may be a first. The 24/7 title changed hands three time during this battle royal. First Drew Gulak pinned Akira Tozawa after he was eliminated. Then Gulak was pinned by R Truth, who took the title. Only for Tozawa to pin Truth and reclaim the belt. Everyone ran to the back. Omos got himself involved after that fracas; punishing the Viking Raiders.

After eliminating Cedric Alexander, Damien Priest and Riddle are the last two men standing. Riddle is able to knee Priest off the apron to secure the win.

After the match, Riddle celebrates to Orton’s theme song.

In the back, Nia Jax questions Shayna Baszler’s process of getting ready for a match. Shayna doesn’t want to her Reginald’s excuses from last week. She is going to take out Alexa Bliss, tonight.

Jaxson Ryker is getting ready for his strap match.

AJ Styles is not pleased that he has to wrestle in a triple threat match for a chance in the Money in the Bank. Styles is also still salty that the Viking Raiders interfered in his qualifying match last week.

Sarah Schreiber gets the scoop on Nikki Cross’s new super hero look. She just wants to inspire people and now has the courage to do it.

Alexa Bliss interrupts the match, allowing Cross to take out everyone on the floor. After the commercials, Shayna takes control in the ring, even as Alexa watches from the ringside. Cross hits a DDT out of the corner. Alexa steps to Nia and Reginald tries to distract her. Bliss takes the both out. Baszler doesn’t know what is going on and almost gets rolled up. Nikki pulls off the La Magistral and is able to get the pin.

MVP walks out to offer a rebuttal. He flat out calls this ridiculous, but is ready for the live audience at Money in the Bank. MVP says Kofi is no threat. Lashley wants Kofi to know that he enjoyed every second of what he did to Woods.

Kofi lays into MVP for how Lashley is handling the WWE title. He doesn’t appreciate Bobby taking days off. MVP tells Kofi it is a good thing he isn’t cleared to wrestle. Kofi goes after him and hits a Trouble in Paradise, telling MVP that now he is hurt.

Eva Marie and Doudrop vs. Asuka and Naomi

This is a rematch from last week, but tonight there is nothing on the line. Eva Marie tries to give Doudrop a taste of her own medicine by refusing a tag, but Doudrop is able to overcome. She takes out Naomi with a shoulder tackle and splashes Asuka to get the pin.

After the match, Eva Marie takes all the credit for the win.

Sarah Schreiber asks John Morrison what it would mean to win the Money in the Bank contract. Miz is confident he can guide Morrison to the ladder match win and a successful contract cash in. Ricochet takes over the interview and takes the drip stick.

Even in a wheelchair, the Miz is a thorn in Ricochet side. When Morrison goes to the floor, Ricochet is able to take him out, but Morrison retreats. He sits on the barrier, so Ricochet hits him with a springboard cross body from the ring. The two fall to the other side of the barricade. Neither man is able to get back to the ring and the ref calls for the bell.

Charlotte is willing to team up with Natalya and Tamina because she respects them.

All six women brawl outside the ring before the bell even rings. Once the match starts, Mandy Rose fights off the Sharpshooter, but kicks Natalya right into Flair for a tag. Rose continues to attack Natalya, only to turn into a big boot from Flair. Charlotte covers to get the win.

After the bell, Ripley hits Charlotte with a chop block and runs out of the ring.

R Truth is mesmerized by Jaxson Ryker whipping himself with the leather strap. Truth is willing to talk to him. Ryker talks about Elias. Truth wants to barrow the strap later so he can uses it to win back his 24/7 title.

According to a quick search of the interwebs, this is the first strap match on RAW since July 24, 2000. And that match was between Lita and Trish Stratus. You would have to go back to September 13, 1999 to have a strap match between two male superstars. D-Von Dudley beat Farooq on that night.

Elias jumps Ryker at the bell; beating him into the corner. The two spill to the floor. Elias hits a jumping knee in the ring. Ryker whips Elias into the corner and then uses the strap to pull him into a side slam. Ryker covers to get the pin.

Damien Priest congratulates Riddle on his battle royal win. Riddle is channeling the Viper. Priest gets him to open up and tells Riddle that Orton is lucky to have him as a friend. AAAAAWWWWWW!

Backstage, Kevin Patrick asks Drew McIntyre if he thinks he can beat AJ Styles and Riddle. What kind of question is that? What he is supposed to say? No? Well, Drew tells some story about a Scottish battle or something. More importantly, Drew tells Patrick that he isn’t going to tell him his strategy.

Drew clothesline AJ and the just shrugs his shoulders as he slams Riddle. McIntyre catches Riddle coming off the ropes and tossing him out of the ring with a belly to belly suplex. He delivers one to AJ Styles, as Riddle hits the floor. Styles gets sent flying with a big back body drop. Styles knocks Drew to floor, but AJ gets cut down on the apron. McIntyre disassembles the announce table and stares Omos down. Drew picks up Styles, but AJ escapes. Riddle flies off the apron, landing a kick on McIntyre. Riddle and AJ jockey for position with Riddle winning the battle with a suplex on the floor. AJ and Riddle team up to slam McIntyre through the commentary table.

After a commercial break, Styles takes down Riddle with a dragon screw. Riddle counters another leg whip with a knee strike. AJ with a Pele kick, but not enough to get the pin. Styles locks in the Calf Crusher. Riddle gets the ropes, but with triple threat rules the hold doesn’t need to be broken. AJ hits a brain buster and Riddle still  kicks out. AJ heads to the outside to take shots a McIntyre, who is still down after going through the table. Riddle catches Styles heading back into the ring, hitting him with the draping DDT. Riddle pounds the mat like Orton and looks for the RKO. AJ counters with a Death Valley Driver and looks for the Styles Clash. McIntyre yanks AJ out of the ring before he can connect. McIntyre pummels Riddle and hits him with a reverse Alabama Slam. Riddle gets to his feet and side steps a Claymore kick. AJ delivers a sliding forearm to Drew. Riddle kicks Styles from the apron and then kicks Drew as well. Riddle with a springboard moonsault to the floor, taking out both of his opponents. Riddle lines up Styles for the kick, but misses and catches all steel steps. Riddle thinks his foot is broken as WWE refs call for the medical team. Riddle is helped to the back, but he wants to stay for Orton’s sake.

After another commercial, Drew sets AJ up on the top turnbuckle. Styles drops down and escapes. He hits the Ushigoroshi, but can’t get the pin. AJ unleashes strikes, but Drew counters with a Michinoku driver. AJ looks for the Calf Crusher and locks it in. Riddle makes his way back to the match with a taped up foot. He locks in the Bro-mission on Styles. McIntyre breaks the hold. Riddle lands a kick, knocking Drew out of the ring. He hits the RKO on Styles and covers. Omos pulls AJ out of the ring. Riddle is incredulous, but doesn’t see McIntyre, who lays him out with a Claymore kick. McIntyre covers Riddle to get the win.

That’s it. See you next week in the ThunderDome!

WWE served up a garbage sandwich of RAW in the ThunderDome, tonight. The opening battle Royal was fun. The show ended with a fire of a main event. Drew McIntyre, Riddle and AJ Styles brought it. Unfortunately everything between Riddle winning the battle royal and the main event starting was hot garbage. The matches had no stakes. There was a strap match that meant nothing and didn’t even go 10 minutes.