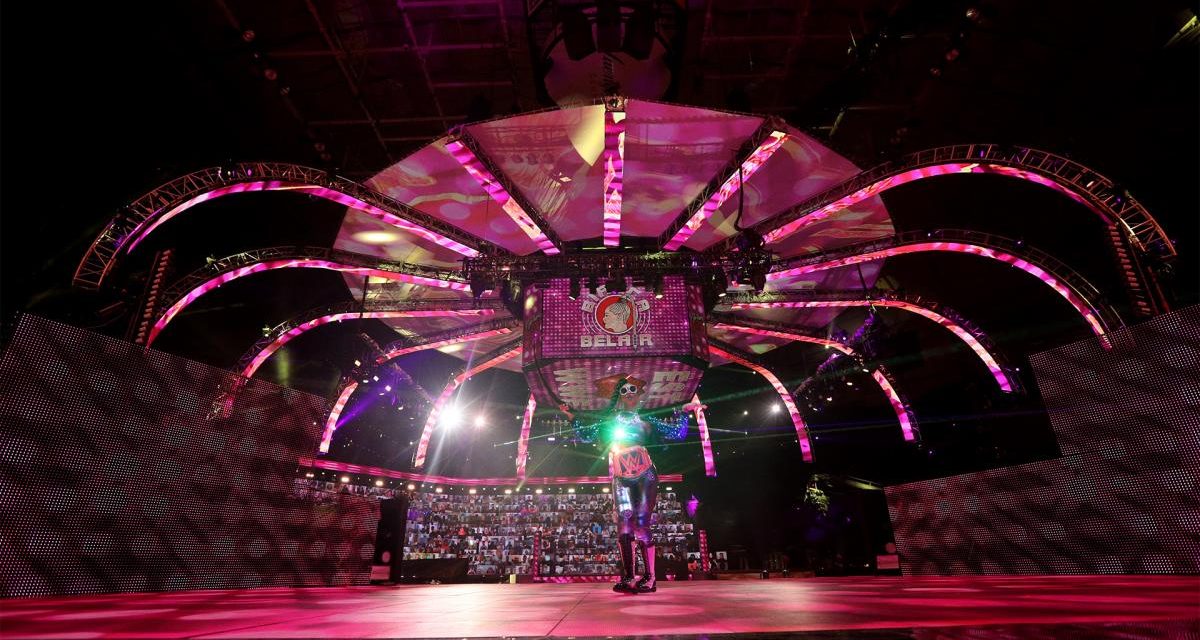 Featuring qualifying matches for Money in the Bank, this June 25th SmackDown hosts the return of a WWE Superstar!

Roman Reigns starts off the show sitting in his comfy chair, with Heyman promising him that the Mysterios are acknowledging him from their hospital beds. Jimmy Uso approaches him, still without Jey. However, he has had a phone call with Jey, and Jey says he isn’t ever coming back. Jimmy says that he can do what Jey did for Roman, be his right hand man. Roman tells him to prove it.

Bianca Belair comes out and talks about how she likes to polish her title and stare at her reflection to remind her that the woman in the reflection took everything Bayley had and still came out on top at Hell in a Cell. She’s very proud of herself, as she didn’t let Bayley get to her.

She’s interrupted by Seth Rollins, who’ll be teaming with Bayley tonight against Belair and Cesaro in a mixed tag match. Rollins talks about how he overcame even more adversity than Belair by beating Cesaro. He says that some would call Belair’s win a fluke, but they should both still celebrate their victories.

Belair denies Rollins a high five, and Bayley comes out to tell her that a champion as braggadocious as Belair is not the champ the people deserve. She calls Belair a Bel-Loser, and the champ takes her out with a right. Bayley fights back, and Cesaro comes out and attacks Rollins.

Cesaro starts off by using his power advantage over Rollins to push him around. Rollins strikes with a back elbow, but Cesaro makes him pay with an uppercut and a backbreaker. Rollins runs and tags in Bayley, and Belair comes in and flattens Bayley with a shoulder tackle. Bayley tags herself back in, and Cesaro comes in with another uppercut. Rollins strikes with a slingblade for 1, before twisting the head of the Swiss Cyborg.

Cesaro fights out and strikes with a series of uppercuts, but Rollins stops his momentum with a PK. He continues the assault with some knees to the gut, but when the Messiah goes for a suplex, Cesaro reverses, lands on his feet, and tags in Belair, who takes out Bayley with a couple dropkicks and a backbreaker. The champ delivers a standing moonsault for 2. Bayley runs outside and Belair follows her, but Bayley slams her into the ringpost as we go to commercial. 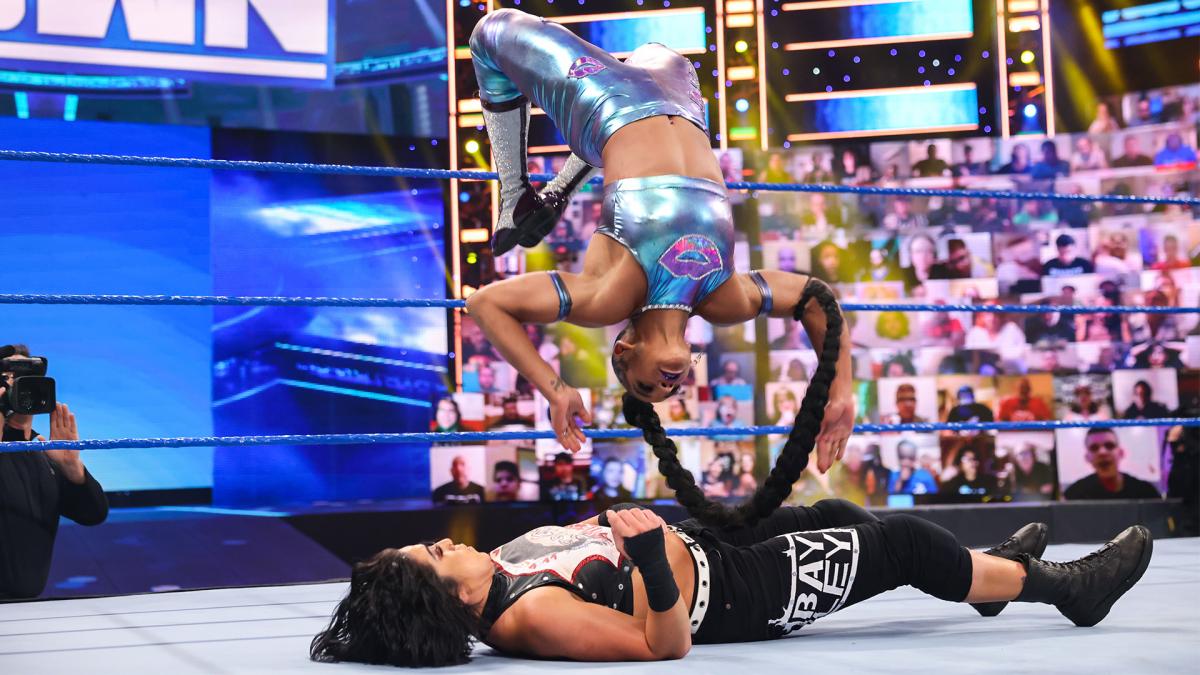 Bianca Belair has been a truly great champion so far. Photo: WWE

When we come back, Bayley has Belair in an arm submission. The EST of WWE tries to escape, but Bayley transitions into a different version of the submission. Belair finally escapes the submission using a back body drop. Cesaro comes in and kicks Rollins to the outside before slamming him off the apron. Rollins goes back in the ring and Cesaro climbs the ropes to deliver a crossbody. Cesaro sends Rollins for a Swing, and looks for the Sharpshooter, but Bayley distracts him, allowing Rollins to roll him up for 2.

Cesaro hits a springboard corkscrew uppercut for 2 and looks for a Neutralizer, but Bayley interferes, allowing Rollins to hit a forearm for 2. Belair breaks up the pin, infuriating Rollins. He takes out his anger on Cesaro, but the Swiss Cyborg has some anger of his own, and he fights back. Rollins tags in Bayley and clotheslines Cesaro out of the ring, but Belair hip tosses Bayley into the ring before shoving Rollins into the waiting uppercut of Cesaro on the outside.

Belair delivers a spinebuster for 2, and looks for the K.O.D, but Rollins runs into the ring to escape Cesaro, and inadvertently runs into Belair, making her drop Bayley. Bayley takes advantage of the situation and delivers the Rose Plant to get the win for her team.

Paul Heyman talks to Jimmy Uso, saying that his family needs Roman to have a right hand man, and since Jey isn’t here, he has to step up. Paul says that Jimmy can prove that he can do what Jey did by winning a match tonight. However, he hints towards some unfortunate consequences for Jimmy if he loses his match tonight.

The coronation of Shinsuke Nakamura kicks off with another crazy solo by Rick Boogs. Boogs places the crown on Shinsuke’s head, and the two rock out, while Corbin watches sadly from backstage. Kayla Braxton asks him how he’s doing, and he asks “what’s the point anymore.” Aww, I actually feel bad for him. Well, a little.

Backstage, Rollins has an intense chat with Adam Pearce and Sonya Deville as to why he should be the next challenger for Roman Reigns’ title. Deville says that they’ll take Rollins into consideration.

The two jockey for position early on, with both competitors putting on a show of strength. Apollo attacks with a series of rights, but Big E stops him cold with a back elbow for 2. He continues the attack with a clothesline for 2, but when he goes out to the apron, Apollo strikes with a Death Valley Driver on the apron as we go to commercial. 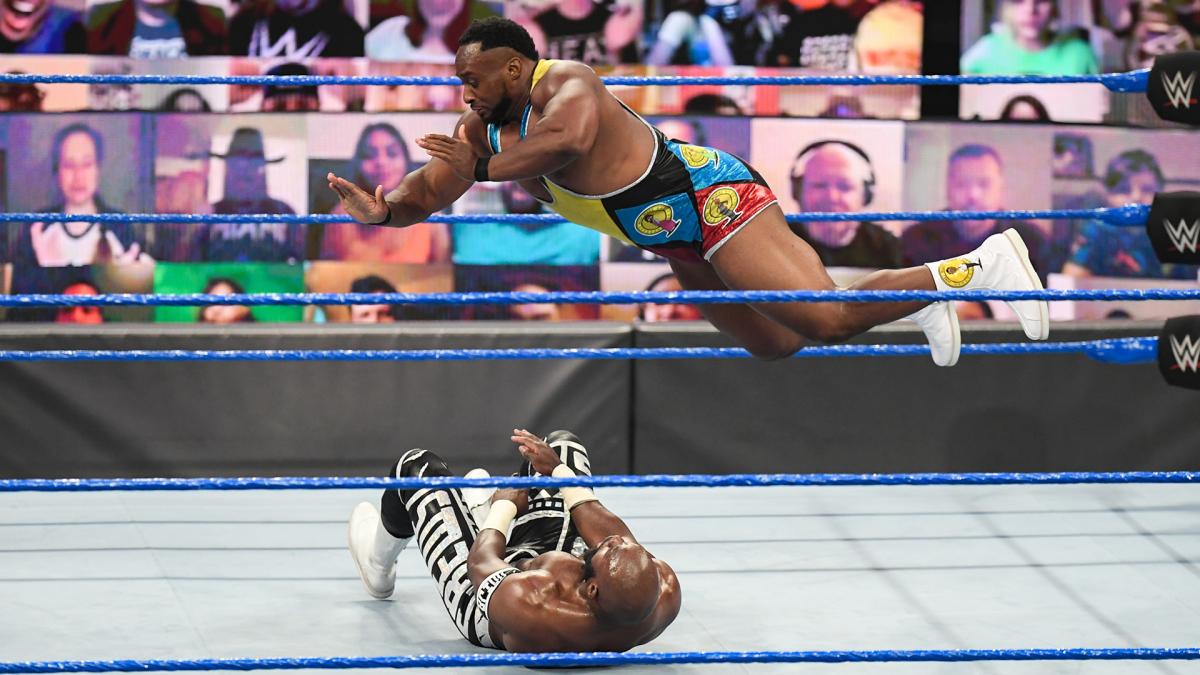 I love how all of Big E’s signature moves have Big in the name. Very Steiner-like. Photo: WWE

Azeez helps Apollo get to the ropes, and Apollo hits Big E with an enziguri. The Intercontinental Champ goes to the top rope, but Big E meets him at the top. Apollo slides to the apron and knocks Big E to the floor before delivering a Frog Splash for 2. Big E rolls to the outside and hits a uranage on Apollo, but when he tosses Apollo back into the ring, Azeez slams Big E into the barricade. The official catches him and sends him to the locker room, and Apollo tries for a rollup, but Big E kicks out and delivers the Big Ending for the win.

Sami Zayn is interviewed by Kayla Braxton, and he rambles about how he’s the universe’s chosen deliverer of karma because he beat Kevin Owens at Hell in a Cell. He learns that he’ll be facing Kevin Owens in a qualifier match next week, and he runs to Pearce to ask him why this is happening. He tells Pearce to just give him the MITB contract, because it would be good, karmically. Pearce tests the universe by making Sami’s match with Owens a Last Man Standing match.

Sonya Deville announces that Carmella will compete in the Women’s MITB match. She goes on an aggressively egotistical rant about her appearance, but she’s interrupted by Liv Morgan, who says she deserves this opportunity way more than Carmella. She slaps Carmella, and Sonya has to separate the two women. Sonya says that if Liv can beat Carmella tonight, she’ll be put into the MITB match.

The match starts during commercial, and when we come back, Carmella is slamming Liv into the apron. She brings her back in, and Liv regains momentum, slamming Carmella into the turnbuckles. Carmella strikes with a couple of Superkicks and some back elbows in the corner, before delivering a Bronco Buster for 2. 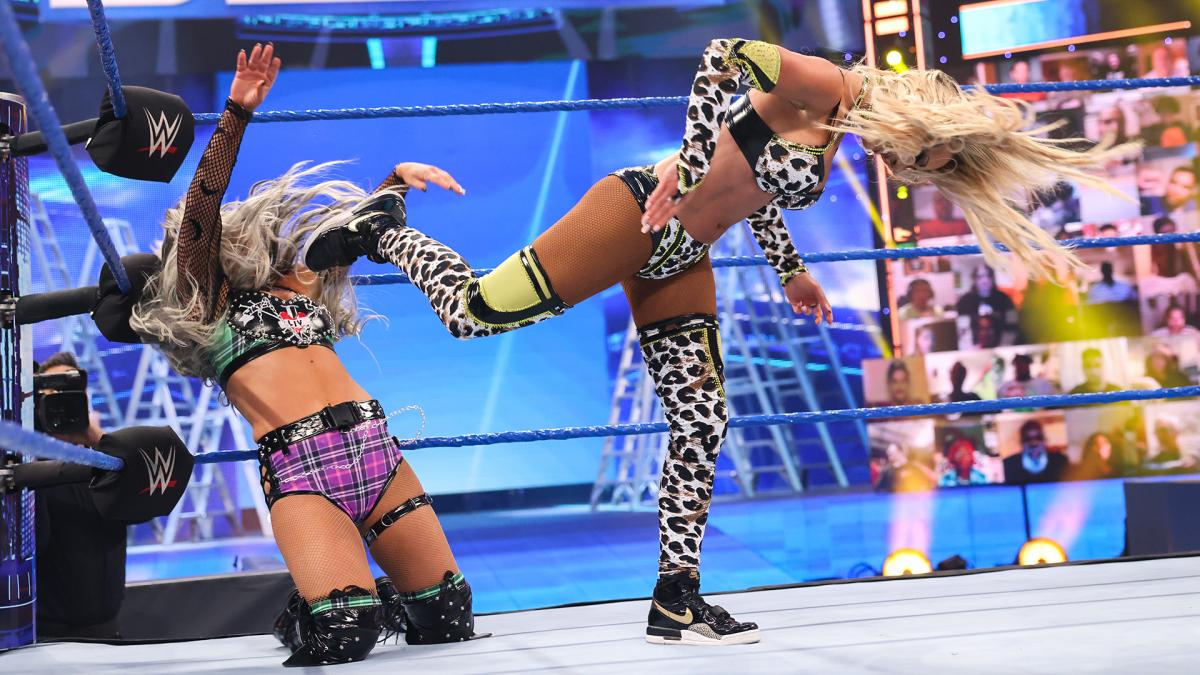 Liv Morgan gets hit with a brutal superkick from Carmella. Photo: WWE

Carmella taunts and slaps Liv, enraging Liv. She delivers ObLivIan, but Carmella gets her foot on the ropes. Carmella regains momentum with a right hand, but when she stacks Liv up on the top rope and looks for a hurricanrana, Liv reverses it into a rollup to get the win.

Jimmy starts off aggressively with a shoulder tackle for 2, before hitting an enziguri for another 2. Ziggler delivers an elbow to the gut and a dropkick for a 2 count of his own, before locking in a Sleeper Hold. Jimmy elbows his way out of it, but Ziggler pulls him to the ground by his hair and drops the blow on him for 2 before locking the Sleeper back in. Jimmy tosses Ziggler to the outside before diving out of the ring with a suicide dive, but Roode takes the bullet for Ziggler. Ziggler delivers a brutal, spine-bending Zig Zag onto the steel steps as we go to commercial. 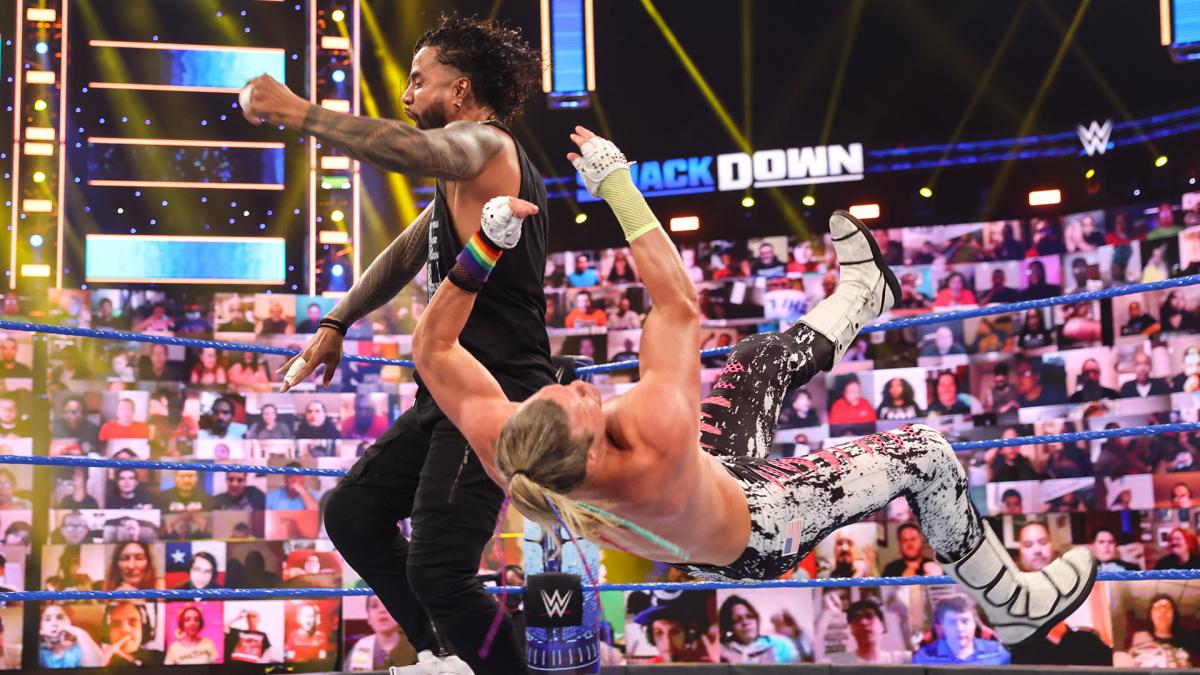 Jimmy Uso with a clothesline to Dolph Ziggler. Photo: WWE

When we come back, Jimmy is fighting out of a Sleeper Hold, but when he goes for a Samoan Drop, Ziggler evades it and goes for a neckbreaker. Jimmy avoids the neckbreaker and hits a clothesline and a Samoan Drop for 2. He looks for a Superkick, but Ziggler dodges him and hits the Zig Zag for a close 2. The two trade blows, with Ziggler getting the better of Jimmy. Jimmy fights back with some chops, but Ziggler rolls him up for 2. Jimmy lands a picture-perfect superkick to put away the Show-Off and get the win.

Even though Jimmy got the win, Paul Heyman tells him that he should wait backstage as Roman Reigns makes his address to the WWE Universe.

Paul Heyman shows some footage of Roman destroying both Dominik and Rey Mysterio. The crowd says romansucks.mp3, and Heyman reminds everyone of all the world class wrestlers that Roman has been put over against, which is not the statement he thinks it is. Heyman says that there is nobody left to face Roman Reigns, but Roman stops him and grabs the microphone.

Before he can say anything, Edge makes his return! The Rated R Superstar slams Roman off the announce table. Roman catches Edge with a Superman Punch and grabs a chair, but Edge hits him with a Spear. Edge places Roman’s head on the chair and goes to grab another one, but Jimmy comes out and stops him from delivering the Con-Chair-To. Edge makes Jimmy pay by Spearing him through the barricade. The show ends with Edge telling Roman he’s right here when he wants him. 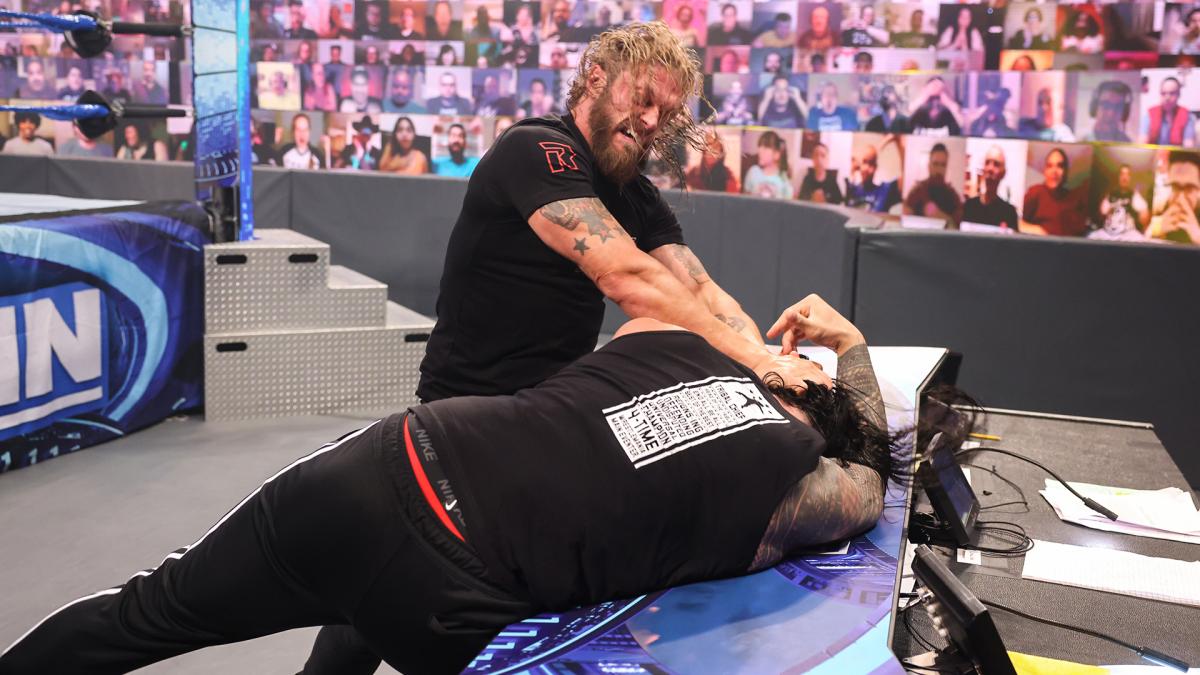 Edge gets a measure of revenge on Roman Reigns. Photo: WWE

This was a fine show, and I fully respect that they’re making us wait for the whole Jey storyline to be resolved. And honestly, with the return of Edge, and still no sign of the Leader of the Yes! Movement, I think that Daniel Bryan is truly done with the WWE for now. Which is a sad and exciting statement at the same time.