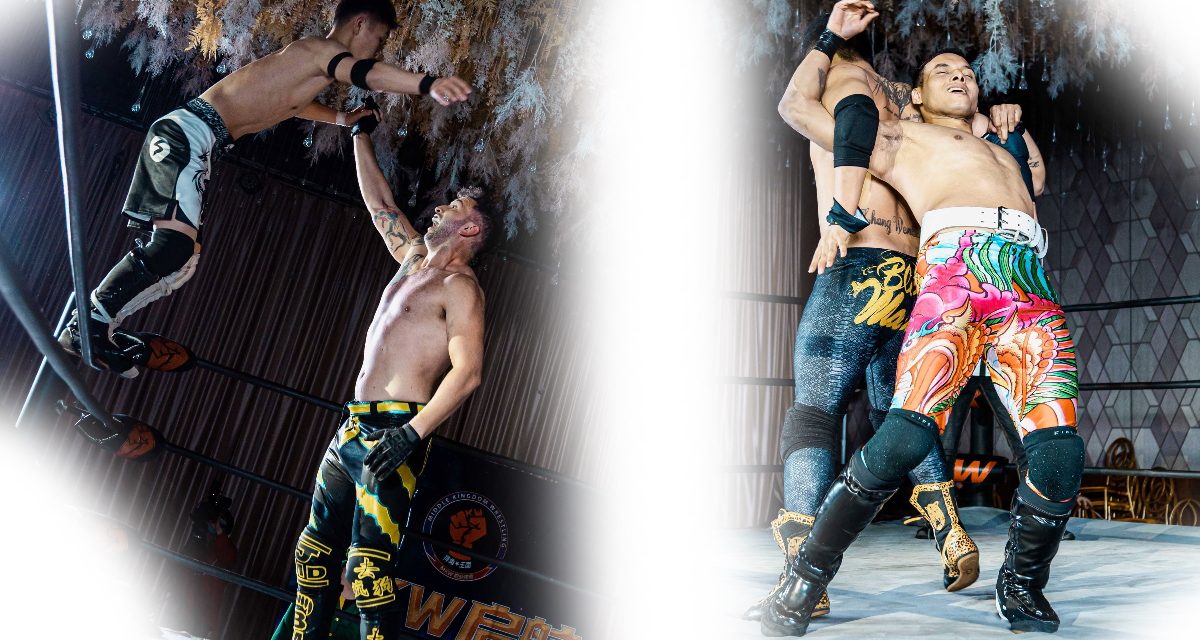 The episode opens with a look at the end of last week’s episode which was C2NY of Buffa and DC Chen winning the Tag Team Championship Tournament over Big Sam and Uncle Money of The Stable.

Next C2NY is backstage with a post-match promo directly after last week’s match proclaiming their enthusiasm for being the first ever MKW Tag Champs.

After the intro XiaoJieMen recaps last week’s episode and runs down this week’s lineup.

Steve gets on the mic to tell Tao he doesn’t feel appreciated by him for everything he’s done. He’s done him yet another favour now and gotten him a shot at the AIWF European Championship.

Tao offers a handshake to start but gets a slap in the face. Connor doesn’t capitalize and Tao lights him up with forearms. They trade momentum until Holmes helps out with a choke on the bottom rope.

Tao shows some hope as they begin to trade offense.

Steve tries to create a distraction but Tao can’t capitalize. Connor hooks in a sharpshooter/cloverleaf/crab hybrid but Tao gets to the ropes. 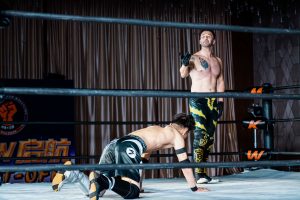 At this stage Connor is methodically working over Tao while belittling him. Through high flying Tao fights out.

They go back and forth with big moves then Steve hops on the apron to advise Tao but instead distracts him leading to Connor putting him down and then hitting a swanton for the win.

This mixed tag match comes to us from APAC Wrestling out of Kuala Lumpur, Malaysia.

The men JYE and Shaukat start. The action is fast, hard hitting, and back and forth with Shaukat showing a little more dominance.

JYE evades a corner attack and tags in Poppy.

Diana gets in and Diana takes control quickly but Poppy answers back when Diana gets distracted trash talking JYE.

Poppy maintains control but Diana shows a lot of fight with pins of opportunity throughout.

Diana turns things around by fighting out of the opposing corner with elbows and kicks on both opponents and finally a neckbreaker on Poppy. Both women tag out.

Shaukat lights up JYE with punches and then slams despite JYE slipping out a few times.

Poppy pulls Shaukat’s hair but when JYE tries to hit him, he hits her instead. This leads to Diana coming in to assist with a neckbreaker/chokeslam combo finish.

This match is an echo of the first ever match for the vacant B&R championship ladder match that Mamba won.

Before the bell Mamba grabs the belt, kisses it and poses with it much to Ash’s disapproval.

Mamba offers a hand and surprisingly Ash shakes it but they both slip away from it immediately.

They trade wristlocks and holds, then things get more intense with shoving and strikes.

Ash offers a hand. They shake tentatively but both pull away and strike each other at once.

A hockey fight ends with Mamba’s headlock but Ash takes control of the exchange and hits a variety of strikes relatively methodically. A whip reverse gives Mamba control but he hurts his knee when it misses connecting with a drop.

Ash works Mamba over and pays attention to the knee. It seems to bother Mamba but he can still hit the ropes normally.

Mamba turns it around with a Steinerline and after a succession of attacks hooks in a crippler crossface. Ash escapes when Marie distracts Mamba. Ash distracts the ref to the point where Marie actually enters the ring and knees Mamba in the crotch. 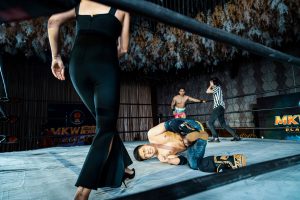 Mamba clutches his groin in agony after Queen Marie’s knee

Ash hits a frog splash off the top for the win.

Cold Ray and Little Johnny enter. Ray gets on the mic and says it’s been good having things back to normal, with his bodyguard, Little Johnny by his side. But even though Johnny’s no longer Zombie’s zombie mind slave, he wants more from Zombie.

Zombie enters and Ray continues saying it was Zombie that involved Johnny in this. He and Johnny are a single entity, especially after all of the recent abuse from Zombie. So, he wants to challenge “fearless” Zombie for the MKW world championship in a 2 vs. 1 handicap match.

Ray very cautiously holds the mic out to Dragon for his response.

Dragon just leaves, shaking his head, with none of his usual music or lights, dragging the belt behind him.

It was a tough challenge to follow last week’s inaugural tag title crowning match. This week had some intrigue and a decent main event. The repetition and ref inconsistency remains.