NWA POWERRR: Nothing is Strictly Business for the NWA National title 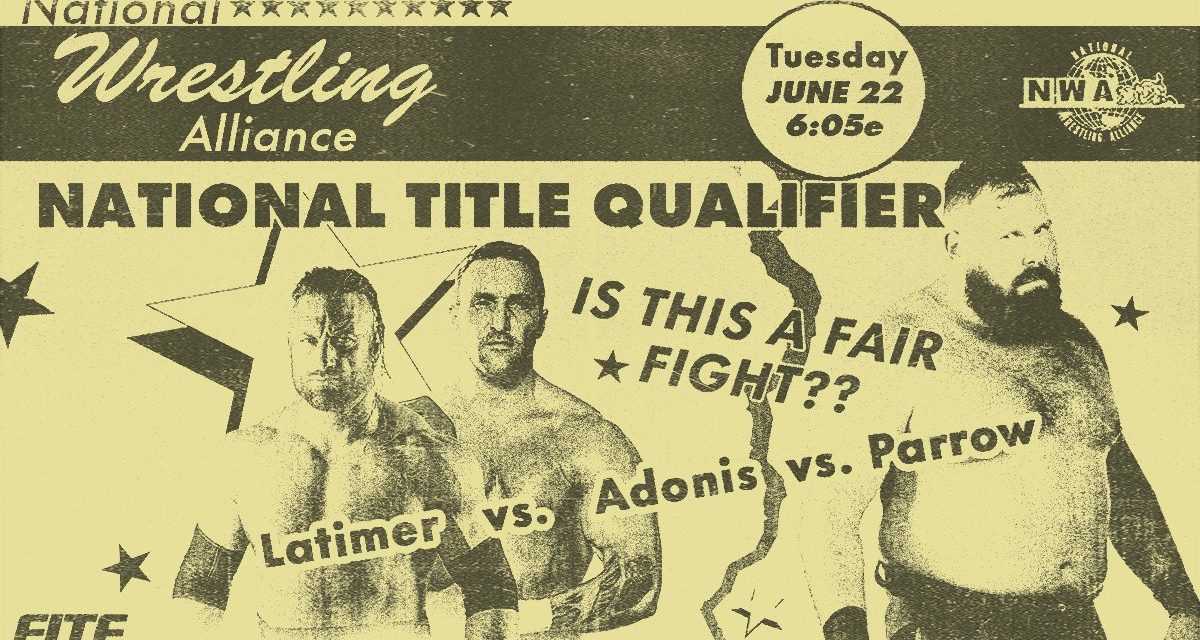 This is going to be a hot summer folks, and not just because you stepped Into The Fire.  That’s right, we got a new NWA POWERRR coming to you live from the GPB Studios in Atlanta, GA.  Your commentators, as always, are Joe Galli, Tim Storm, and Velvet Sky.

Manning The Podium with the grace of a balder (and perhaps, leaner) “Mean” Gene Okerlund is the one and only Kyle Davis, who’s with all the members of Strictly Business. 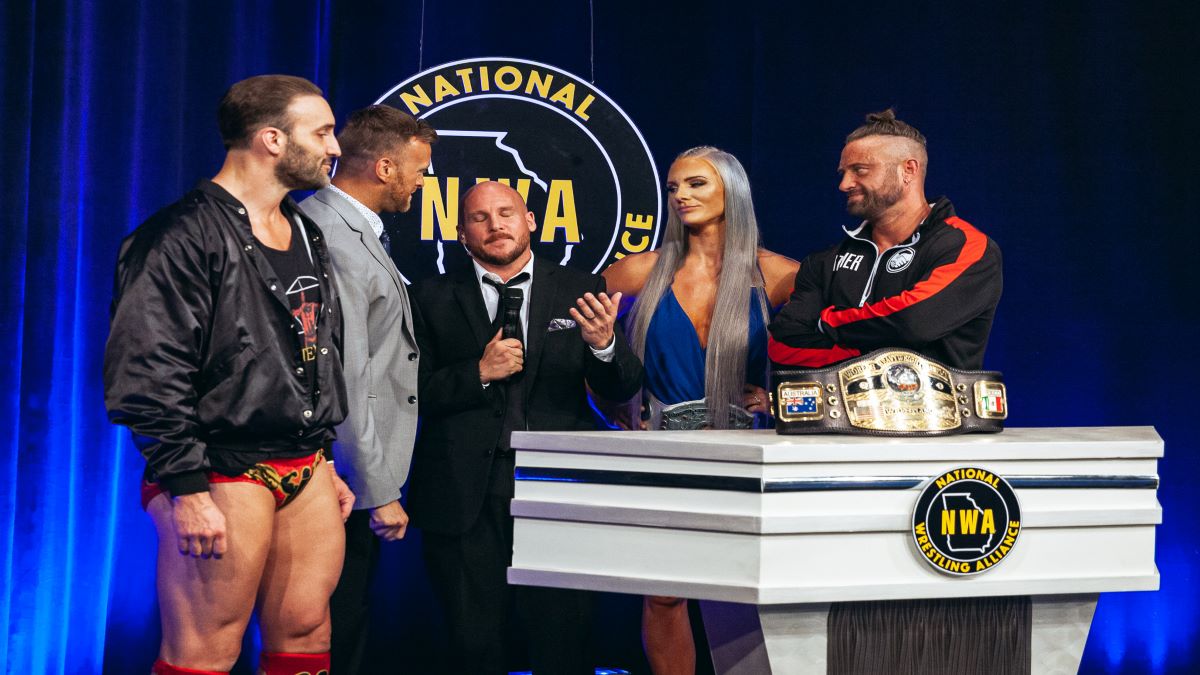 He asks Nick Aldis about tonight’s main event in the three-way for the NWA National championship tournament t, and Aldis wonders why Davis isn’t valet parking his Jag right now. Aldis isn’t distracted, and Strictly Business is all on the same page, and supremely confident on how tonight will shape up.  Even Chris Adonis states that, “Chris Adonis is the rightful National Champ!”  Kamille chimes in that it is stupid both Latimer and Adonis are in the tourney at the same time, and it’s bad business.  Aldis states the blame is courtesy of “Conspiracy Corgan” and to take it up with him.

May Valentine is backstage with War Kings Jax Dane and Crimson, and Crimson has a grudge match tonight with Slice Boogie. Slice has been a thorn in their side for too, and he’s gonna take care of this. Jax is here to support his brother in arms.  Ain’t it precious?

Well, let’s throw it to the First Match of the night…. 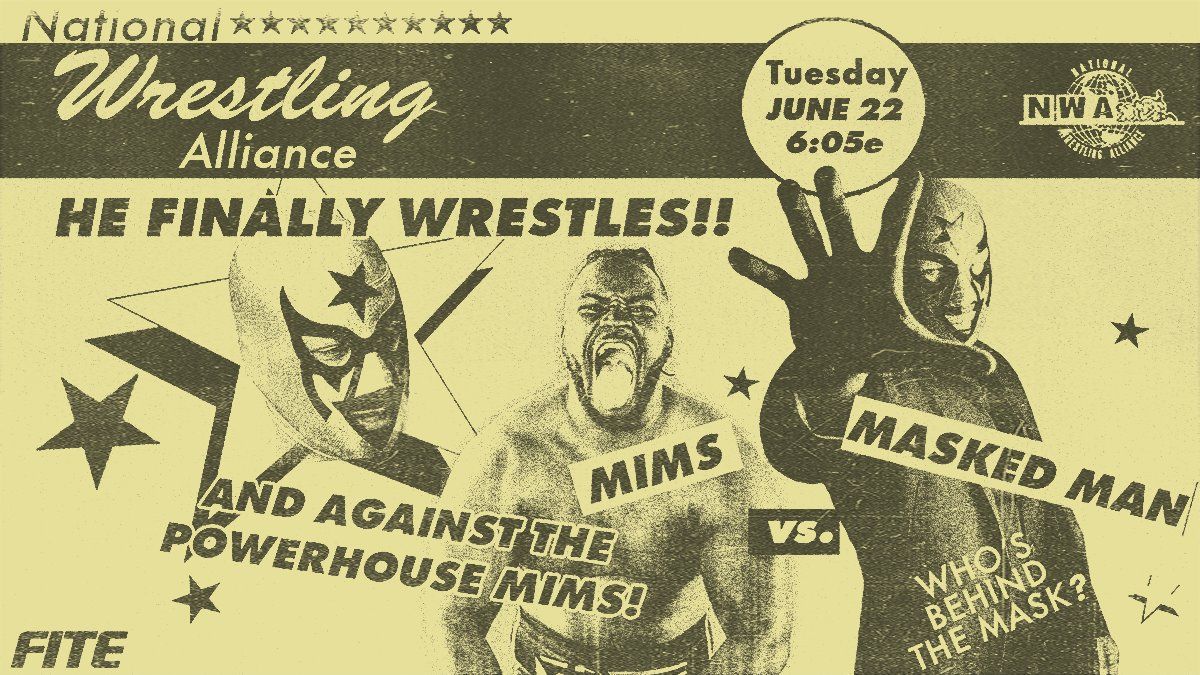 It’s funny how Davis announces, “And from…?  This is the Mystery Man.”  Good try, Kyle, but my way is better.  Heck, you coulda pulled an Orange Cassidy intro on the guy, and it would still fit.  But I digress.

Match has some nice chain wrestling from the Mystery Man (Heretofore to be shortened to “MM.”  If anyone was expecting more lucha libre in this match, it gets more mat-based throughout.  Mims has the crowd support, but MM has the technical prowess to take control.  Mims does get some spots in, with a clothesline and a Warrior splash, but it’s too much MM.  A nice cartwheel Death Valley Driver gives MM the exclamation for the pin, and the win.

Your Winner via Pinfall:  The Mystery Man (aka The Son of The Question Mark™)

(Author’s Note:  Either give him a name, or I will, NWA. Be curious how I can make that sucker trend as a hashtag.  #TheSonOfTheQuestionMark)

Back to The Podium with Kyle Davis, and he’s with Jordan Clearwater and Black Jeez, and they got a plan for facing Tyrus in their handicap match. Clearwater asks what the plan is, and Jeez is all, “Church is money.”  Ooooo-kay? 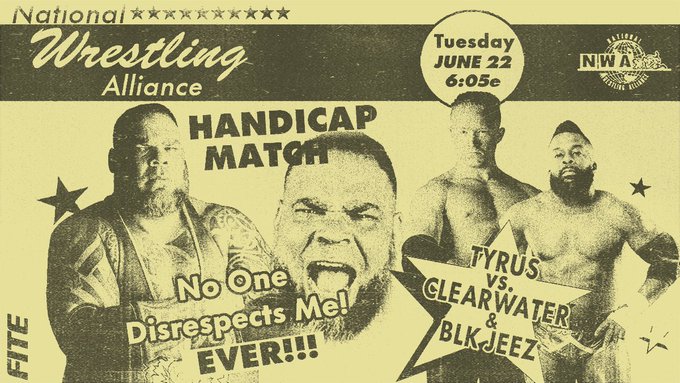 Davis introduces the team as “The Church Is Money”, and I suddenly find myself asking what in the name of The Righteous Gemstones is up with this tandem.  Tyrus comes in with a taped fist, and this match smells of “squash match.  But, before I can find a recipe for squash, a funny thing happened…I started to care about this match.  From little things like the commentary (Storm:  “It’s two men against a manster. I can’t believe I said that!”), to Clearwater and Jeez having the best comedy duo since Laurel and Hardy or Al Snow/Steve Blackman.  As Tyrus watches on to Clearwater ask Jeez, “What is the plan?”, and Jeez demonstrates by laying down for the pin.  Clearwater is the straight man, and doesn’t want to be squashed by Tyrus, but doesn’t want to lay down, either.  Jeez convinces young Clearwater it’s in his best interest, and Clearwater finally relents.  Tyrus then puts his big boot on Clearwater, while putting his index finger on Jeez for the (and I use the word loosely) pin.  And, I’m gonna let Kyle Davis call this one….

Galli and company are wondering what they just watched, and I believe Galli asked the best question of all:  “Do they get paid to do that?” 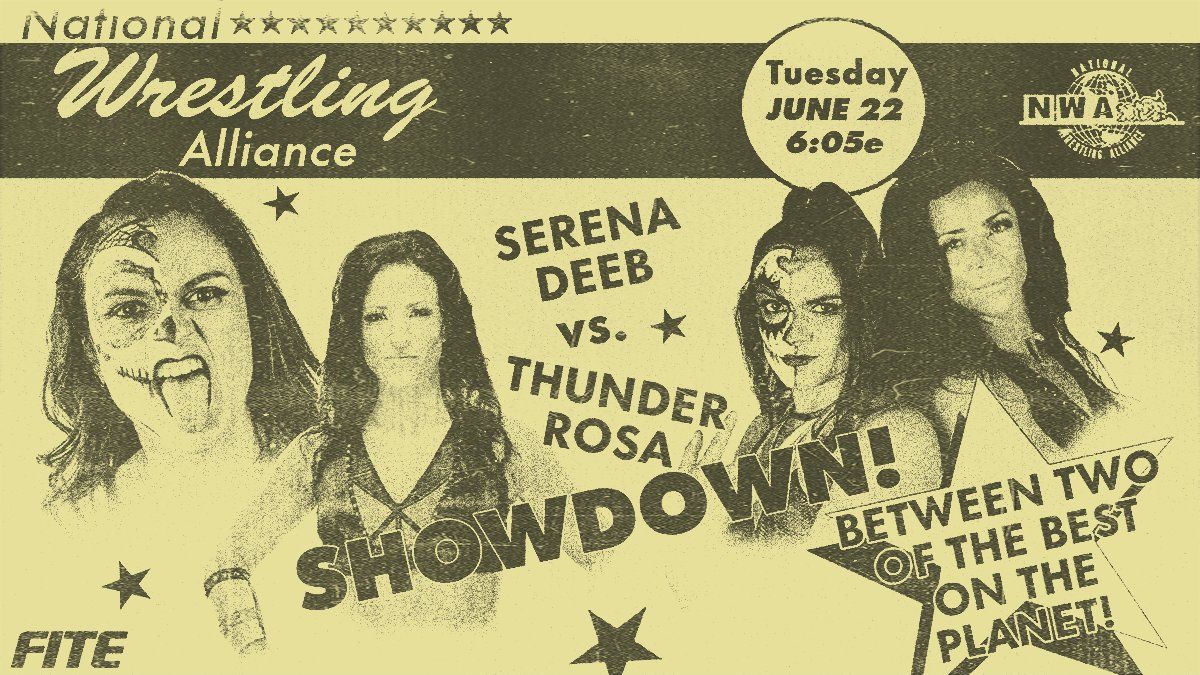 Thunder Rosa vs Serena Deeb at The Podium, and tense doesn’t begin to cover the animosity these two have for each other.  Serena feels she is the rightful contender to “The Burke”, while Thunder Rosa feels Deeb is nothing more than an outsider.  Deeb gets in Rosa’s grill that she carried the belt for nine months, but Rosa asserts she carried the belt before her to places like AEW.  Rosa gives kudos to Serena, though, that she is a great athlete and champ, but she’s not loyal to the NWA.  Davis suggest they should have a match to see who’s the number one contender for the women’s belt, and Serena is up for it, and Rosa ain’t liking how she’s trying to take her shine.

From there, it moves to other women that are the future of the business, like Serena giving props to Kylie Rae is one of the tops.  Rosa says the sky is the limit for another woman in the back, which brings out Melina.  But Rosa was not mentioning her, she was mentioning Skyy Blue.  Melina couldn’t figure it out, and says step back honey, and then for a spell, Melina and Rosa have a super strong bonding moment that only Chingonas Chicanas can understand (go to Google Translate for that one if you’re from outside Ogden, UT).  Serena feels up for a match with Rosa, and Rosa steps up, saying, “Stop taking my shine…Bitch!”  Feel the Chola Furiosa, Ladies and Gentlemen.

May Valentine in the back now with Taryn Terrell and Jennacide. Terrell understand that Deeb and Rosa overlooked her, but that’s fine. Don’t sleep on Jennacide, she says.  If you do, she’ll be like a hard pillow that won’t be able to lift your head, or something.  I should have listened harder, but I lost some brain cells this week as part of my latest Squared Circle Cinema (coming soon on Sunday), and I’m feeling the effects keenly with every sharp note of Terrell’s voice.  Oy. 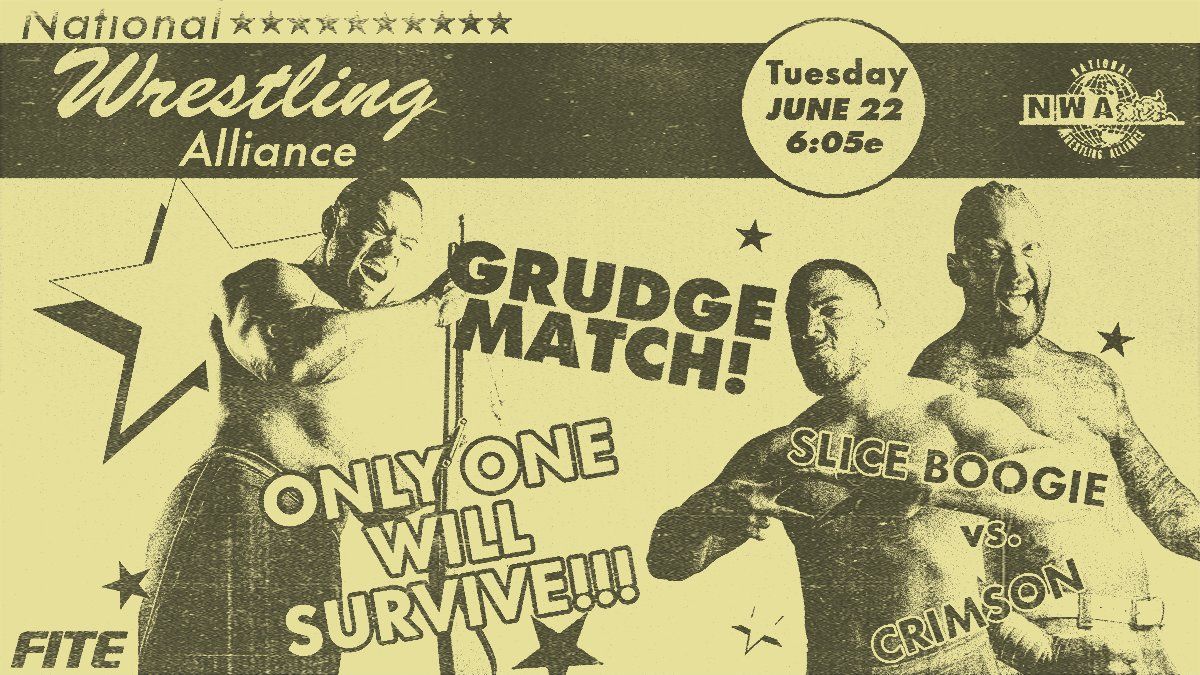 Bell rings, and Crimson takes down and puts the hurt to Slice right away.  Crimson has full advantage until “all Day” Marshe Rocket pulls Slice out of the ring.  Crimson gives chase and puts the hurt to Marshe, and then to Boogie.  He sends Slice back in the ring, and as he climbs through the ropes, Slice gives a kick to the ropes to Crimson’s…errr, little Kings.  From There, Slice gives Crimson a receipt, and even throws in a nice axe kick to add a little Harlem Heat, if you can dig it, sucka!  Boogie brings the violence, but Crimson reverses with an exploder and a vertical suplex to take the wind out of Boogie’s sails.  Crimson proceeds to toss Slice like a rag doll, and as he rushes to the corner, Slice brings up a boot to Crimson face. Boogie with an inverted DDT gets him a cover for a count of two. 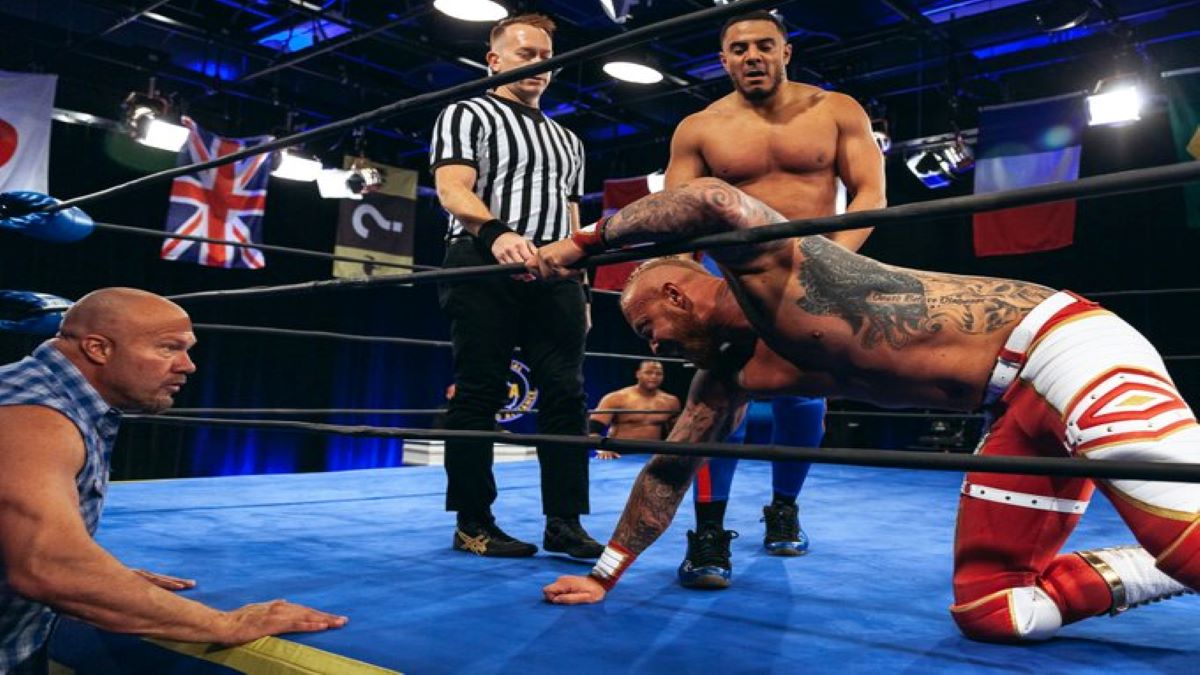 Slice goes out again, and brings a steel chair to the mix. He swings, and misses Crimson, who sends him outside the ring again.  Crimson presses the attack, and starts whipping Slice with a belt.  Back in the ring, Slice begs off and offer a hand of truce.  Of course, Slice channels Flair and goes for a dirty kick, but Crimson ain’t falling for it.  He grabs Slice in a fireman’s carry, and Crimson with a DVD for one, two…he’s not done.  Crimson goes to grab the steel chair, and Dane says he doesn’t need it.  Crimson wants him done, and Dane takes the chair from his tag partner, and Crimson finishes him off with another DVD for the three.

Your Winner via Pinfall:  Crimson

After the match, both War Kings stare at each other, and one can’t help if this is the cracks in the tight tag unit.  We’ll have to ponder that for another episode.

Joe Galli now with Trevor Murdoch, and a sinking Aron Stevens (office chairs, I tells ya) for the Main Event in this National tournament in this Main Event…

Parrow (with OdinSon) vs Thom Latimer vs Chris Adonis

Stevens and Murdoch watch on, offering their opinions as each were good NWA National champs in their own right.  As Parrow is the huge favorite, they wonder how much Latimer and Adonis will need to do to even the odds.  Well, we need no wonder for long, as the douchenozzle double team by Strictly Business starts the match.  Both Latimer and Adonis are on the same page, and send Parrow out of the ring.  With the big man out of the picture, Adonis and Latimer wrestle straight with a nice technical showcase.  Anytime Parrow comes in the ring, they send him out and go back to work on each other, and the aggression between Latimer and Adonis starts to really heat up. 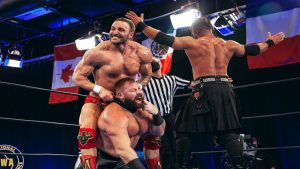 Back in the ring, and Latimer and Adonis throw a couple of axe handles to Parrow, but they can’t knock down the big man.  A clothesline by Adonis, and as he poses Latimer goes for the pin but Adonis breaks up, and as the philosopher Jim Ross would say, business is starting to pick up in the ring.  As the Strictly Business stablemates start to bicker, Parrow gets double clothesline and a Parrow Driver to Adonis for cover, but gets broken up by Latimer. Parrow stets his sights on Latimer, and a sit out powerbomb by Parrow gets a two count for his troubles.  Now Adonis and Latimer send Parrow up top to work him over, and they deliver a ring shaking superplex to Parrow.  Adonis convinces Latimer for a top rope spot to finish Parrow, and as Latimer gets in position up top, Adonis covers for the count of three.

Your Winner and Finalist for the NWA National Championship:  Chris Adonis

Latimer is up top, staring in disbelief, as Adonis rolls out of the ring, and the credits roll.

Solid show tonight, with a good taste of what the Mystery Man can bring to the roster, to the Main Event that told their story in the ring and sets the stage for bigger things down the road for the menbers of Strictly Business, and Parrow is a force in the ring.

Also, kudos to Clearwater and Black Jeez for their, and I’ll be charitable when I say, “ringwork.”  Hey, it prevented me from doing a squash recipe in it’s place.  Kudos, I say.

As for the women, I feel like the cutting promos and cutting down on each other is gonna wear thin after a while.  But, if Melina and Thunder Rosa can bring the Chola Furiosa, then I’m down for it.

Until then, subscribe to this on Fite.TV, and see ya in Seven!