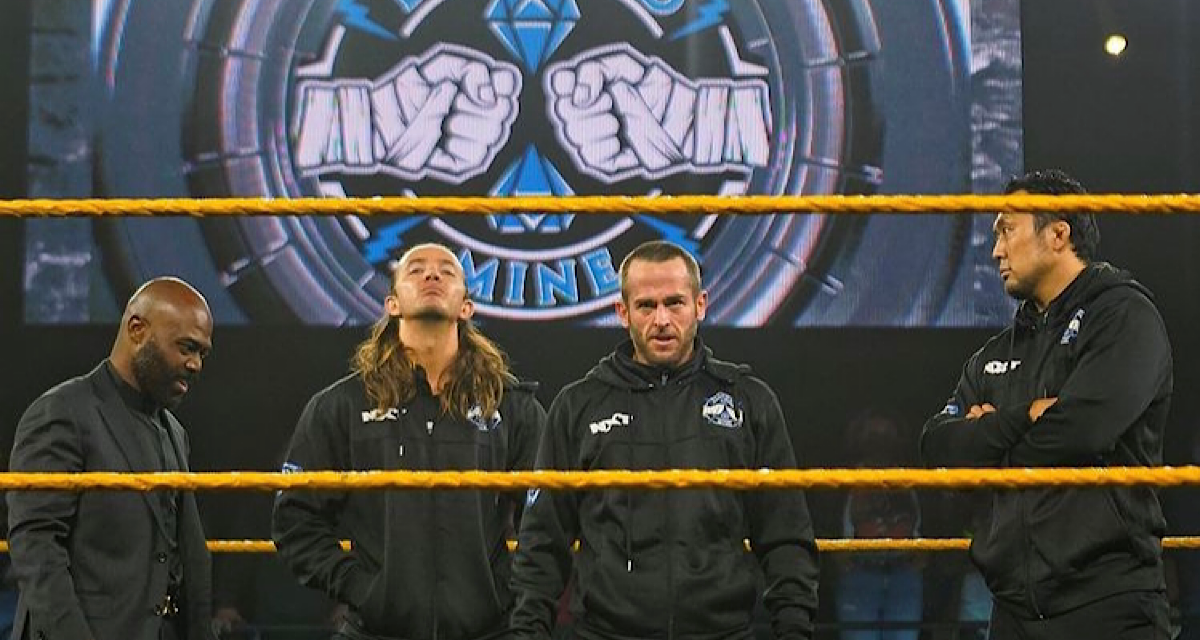 Last week on NXT, Samoa Joe made his reinvigorating return as the enforcer of the black-and-gold brand. But tonight, chaos still ensued as the long-promoted Diamond Mine revealed itself as NXT’s newest faction. Malcolm Bivens, Tyler Rust, Hideki Suzuki, and — back from hiatus — Roderick Strong made an impactful debut, ending tonight’s episode by attacking Kushida.

Kushida, the NXT Cruiserweight Champion, wrestled Kyle O’Reilly in tonight’s main event as the latter’s handpicked opponent, which was stipulated by General Manager William Regal. O’Reilly is scheduled to face Adam Cole at The Great American Bash on July 6 in the continuing aftermath of the Undisputed ERA split, and with Strong and Diamond Mine entering the mix, things have gotten very intriguing.

Cole takes the mic beforehand, reacting to Samoa Joe’s attack last week and his upcoming match with Kyle O’Reilly. Cole refuses to pick an opponent, but interrupting him is Carmelo Hayes with some “ruthless aggression”. No, really — Hayes pays homage to the famous phrase before slapping Cole across the face. The newcomer however is outworked by Cole, who continues the beatdown throughout picture-in-picture and onward until Hayes retaliates with the desperation comeback. The competitors trade reversals and maneuvers before the mid-air superkick and proceeding Panama Sunrise give Cole the three-count victory. Hayes, in his second ever match in NXT, clearly has some backstage support, and he’s delivering without a question.

Earlier today, Franky Monet was mingling with Aliyah and Jessi Kamea of the Robert Stone Brand before the man himself interrupted. Apparently, Monet is attempting to steal away Aliyah and Kamea, but Stone is of course oblivious. The duo’s opponent’s, Zoey Stark and Io Shirai, are interviewed by McKenzie Mitchell afterwards.

The Million Dollar Champion LA Knight cuts a video-package promo on Cameron Grimes while sunbathing with the gold. The lineage — for now — is in good hands, people.

Johnny Gargano and Austin Theory are in-ring, and the former makes the claim at becoming new NXT Champion. But before long, Pete Dunne and Oney Lorcan interrupt to “provoke” the opposition — key word being “provoke”. Dunne snaps the fingers of Theory, but Samoa Joe could quite obviously care less.

The most over man in NXT, Cameron Grimes, arrives at the Capitol Wrestling Center and is approached by 205 Live’s Ari Sterling, who makes a snarky remark about Ted DiBiase. Grimes takes light offense and responds with a right hand “for Ted”.

Adam Cole refuses to talk about Kyle O’Reilly with McKenzie Mitchell, and William Regal steps in to give some advice. He suggests that Cole refrain from provoking Samoa Joe, but Cole doesn’t “wanna be here anyways” and leaves.

Regal hired an enforcer, not a bouncer, as Gargano and Theory can still freely enter his office to be annoying. To their disapproval, Regal makes the tag team match between The Way and Dunne & Lorcan official.

As rapper Drake says, “We’ll see what’s ‘bout to happen next” for the former NXT Women’s Champion Io Shirai, and a tag team run with partner Zoey Stark could very well be it. As the match progresses, the champions Candice LeRae and Indi Hartwell appear ringside for a “close look” as Aliyah takes down Stark. Following commercial, The Brand loses control when Shirai and Stark make their respective comebacks, and a top-rope Moonsault from Shirai gains them the victory.

As a midcard duo, The Way’s comedy shenanigans are quite alright considering that they can back themselves with in-ring talent. The stone-faced team, in contrast, of Dunne and Lorcan take full control though with Theory’s “broken” finger playing a part. Theory hits an amazing dropkick but cannot capitalize as Dunne stands tall before break. Gargano eventually receives the hot tag to aptly timed “Johnny Wrestling” chants, and the four competitors trade big moves thereafter. Gargano — the star of this matchup — pulls out all the stops, so to speak, and finally hits One Final Beat on Lorcan to win. Babyface Gargano and Theory is going to be a hoot.

Not taking a liking to Gargano’s derogatory words earlier, the NXT Champion Karrion Kross attacks from behind. Everybody knows that underdog Gargano is the best Gargano, and he’s surely about to return.

It’s the “world premiere encore” of Franky Monet, and her entrance is still glam. Lopez gets some considerable offense in, but Monet of course recuperates with the facebuster finisher for the three-count win. The premiere and subsequent encore were both enhancement matches, but when Monet eventually climbs the ranks, will the in-ring showings live up to the entrance?

Earlier today, Ever-Rise made a failed attempt to vandalize Hit Row’s car. Top Dolla nails it again, saying that “ski masks don’t work when your names (Ever-Rise) are on your shirt.” He bulldozes through the opposition, and Asonte “Thee” Adonis hits his signature dropkick — the best in the business as commentary says. Ultimately, the nasty-looking powerbomb-neckbreaker combo puts the matchup away, and the leader, Isaiah “Swerve” Scott, throws a post-match kick before the group taunts towards the camera. There’s a ton of potential with this crew.

Backstage, Mercedes Martinez is attacked by Xia Li and Boa, and making the save is Jake Atlas. Next week, they’ll compete in a mixed tag team match.

History repeats itself, and once again, Kushida and O’Reilly meet inside the squared circle under a new, black-and-gold banner. Their jiu-jitsu acumen is pretty amazing as the competitors flow like water throughout the opening goings, and an inadvertent double headbutt sends them into picture-in-picture. Back from break, Kushida and O’Reilly roll through various submission attempts until they eventually start trading big blows and maneuvers. Kushida attacks the left arm throughout, which ultimately gives him the opportunity to suplex O’Reilly atop the apron and cinch the Hoverboard Lock. But rolling through the submission, O’Reilly catches a rollup to pin Kushida for three. The competitors exchange their respects after a fantastic main event, but from behind, Adam Cole blindsides the victor.

A mass of security — and to a lesser extent, Samoa Joe — forces O’Reilly and Cole away from the ringside area as three hooded men attack Kushida in-ring. Roderick Strong, Tyler Rust, Hideki Suzuki, and Malcolm Bivens are Diamond Mine!

The shock debut of the Diamond Mine bumped the rating here, to say the least. NXT has been on an absolute roll the past couple of weeks, and tonight’s surprise was, well, an actual surprise. It’s a reminder of why wrestling (at its sporadic high points) is so enthralling, seeing how storylines and roster utilization intertwine for angles like this. Roderick Strong and Diamond Mine have got my attention.