AEW Dynamite: Callis’ crew gets one over on the good guys again 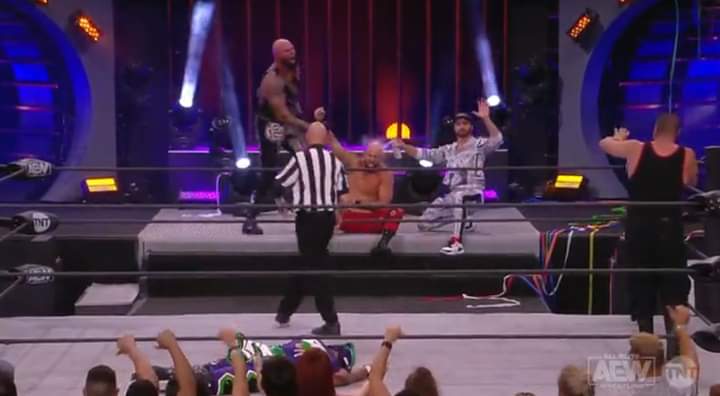 We’re almost at the end of two different sets of circumstances that have kept AEW Dynamite from returning to business as usual. One is that the NBA Playoffs are close to releasing their chokehold on Wednesday nights, and the other is that Dynamite is returning to the road in July. For the time being, we’re still hanging out at Daily’s Place on Fridays. Sounds like we’re headed to a bar, but nope, it’s time for some wrestling, live on TNT.

This is a pretty good facsimile of an honest to goodness MMA fight, with Justin Roberts introducing the combatants in MMA style and a very nice “don’t call it an Octagon” cage. There are no judges, so only KO, TKO or submission can end it … which seems silly since there are three five-minute rounds. What if there are no stoppages? Do we have overtime? Let’s be real, though: These guys wouldn’t go to the cards even if there were some. There are some pro wrestling-style flourishes in the second round, including a hurricanrana by Wardlow (!), but the end is logical, coming when Hager chokes out Wardlow. There is a an attempted show of respect afterward, but Shawn Spears come flying in with a cheap shot on Hager, and pretty soon Chris Jericho and MJF are involved as well. MJF applies the Salt of the Earth on Jericho’s already injured arm. Dean Malenko intervenes, but MJF lays him out with a forearm smash. Sammy Guevara runs to the rescue as well, but is prevented from pursuing MJF by a platoon of referees.

Frankie Kazarian is quoting some bible in his promo, though his thirst for retribution is not stereotypically holy. Hey, even Penta got in on this promo. Those two and Eddie Kingston will face

Team Taz still has some internal issues, and that’s even without Brian Cage. Can Taz get everything figured out? He challenges Adam Page to face Powerhouse Hobbs next Saturday night.

Men of the Year (Ethan Page and Scorpio Sky) vs. Darby Allin

As you may recall, the Men of the Year offered Allin a chance to pick someone other than Sting as his partner, but he declined to have one at all. That might turn out to be what we call a tactical error, though he shows a sense of humor with a mock tag to himself. It’s even a faux hot tag as he turns up the offense — for a moment, anyway. This might help: With the ref occupied, Allin uses a zip tie to fasten Page’s legs together, making it a one on one fight. Alas, Page manages to free himself, and there is no third wind for Darby, who eventually succumbs to the Ego’s Edge.

Winners: Men of the Year by pinfall

The Wingmen waste no time giving Cassidy an impromptu makeover with some beauty products when he gets tossed to the floor, and it’s hard to argue that’s even grounds for a DQ. Plenty of hijinks erupt later, but Cassidy starts serving up Orange Punches to darn near everyone, and that’s enough to put Bononi and the Wingmen in the ‘L’ column.

Alex Marvez wants a word with Jungle Boy, but Kenny Omega interrupts in the loudest and most direct way possible. When Kenny offers a chance to fight him right there and right now, Jungle Boy looks like he’s going to take him up on getting the first shot free, but Michael Nakazawa gets in a cheap shot, and Omega and Don Callis hop in a golf cart and retreat before there can be a real brawl. Nakazawa gets smashed in the face by a forearm, though, which he richly deserves.

Deprived of his last interview, Marvez moves on to Matt Hardy and the Hardy Family Office. He talks tough about Christian Cage, but when the man himself comes looking for Matt, his henchmen lock Christian behind a fence. Hardy says that if Cage keeps coming after him, he will end Christian’s career.

Brock looks so much like his dad, both in the face and in his wrestling style. There’s one sequence of repeated shoulder charges in the corner that almost feel like an homage to the Enforcer. It’d be good for him to get the pin as well, and he does it, pinning Solow. The first of many, one would expect.

We’re back to promos from Jake Roberts that I don’t completely understand. Please let Lance Archer speak for himself. That was going pretty well as of late.

Jim Ross sits down for a chat with Andrade El Idolo. He agrees with J.R.’s assessment that he’s a superstar, as well as the idea that he’ll be going for gold as soon as possible. He finishes by saying that he and Vickie Guerrero have a surprise in store.

Man, I hope Marvez is getting paid by the mile tonight, running around to talk to people. Hangman is hanging with the Dark Order again, deflecting questions about himself and the AEW title situation to give props to his Dark Order buddies — particularly Evil Uno, who Page says gave “the performance of a lifetime” challenging Miro last week.

Facial expressions are an important part of pro wrestling, and Ford’s disgusted look when Hart makes her entrance is priceless. We miss a decent chunk of this one during commercial, but Ford backs up her disdain with a painful looking submission. After the bell, Miro comes out to ask where Kip Sabian has been. He’s supposedly there to back up Ford, but he mostly appears to just be looking for a fight, and he gets more than you might expect from Brian Pillman Jr.

With Tony Schiavone on hand, Guerrero barges in to demand a title shot for Nyla Rose from Dr. Britt Baker. Though Britt tries to dismiss the idea, Guerrero reveals that Tony Khan owes her a favor for bringing in Andrade El Idolo, so it’s going down whether the dueling dentist likes it or not. She and Rebel are still laughing afterward, so they don’t seem too worried.

FTR and Santana and Ortiz are very different, but they also have some similarities. A video package highlights both while also furthering their feud with some serious trash talk.

Things still seem to be going pretty well for the Jade Cargill brand, as she has a new sponsor and all kinds of financial goodness going on. Mark Sterling’s enthusiasm for his job is infectious.

Matt Jackson starts out by wrestling in his beret, looking like he was on his way to try out for the Village People. The announcers put over the idea that the Young Bucks put Pac on the shelf with repeated BTE Triggers, explaining why Penta had to turn to guys like Kazarian and Kingston to form a trio — though they have their own very real beefs with the Elite as well. There’s some great back and forth action in store, but in case you’re wondering where Nick Jackson is, he arrives with some cold spray to the eyes of Penta at a key moment (meaning the show is almost out of time), gift wrapping a victory for Karl Anderson. J.R. notes that Callis’ team has outsmarted a lot of people, and there’s no real debating that point.

Winners: Matt Jackson and The Good Brothers by pinfall

We’ve gone right up against the end of the TV window for tonight’s episode, so no time for pleasantries after the main event. Don’t forget that AEW Dynamite will next air on Saturday, June 26, for what looks like a loaded card. See you in eight!

That’s a little bit more like it, Dynamite. The Friday shows have been a bit of a slog the last few weeks, but tonight had a better balance between in-ring action and promos, and even the MMA-style match was fine. One aspect that has been good throughout the exile to Fridays has been the build to next week’s Saturday card, which has a PPV-like feel. Bring it on.