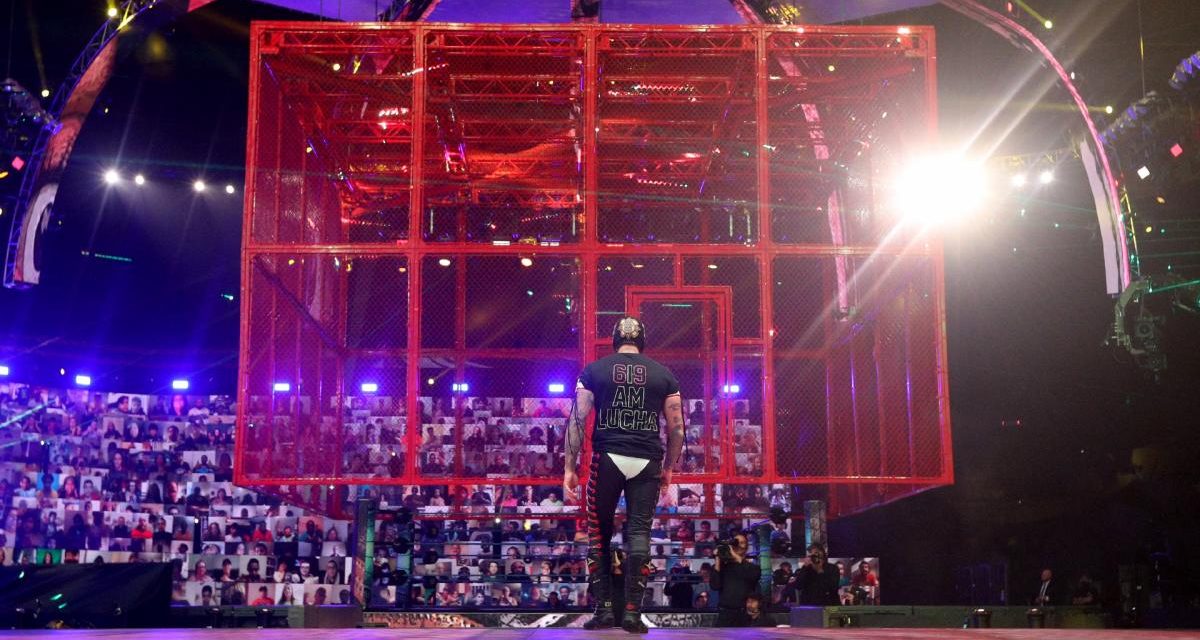 Rey Mysterio enters the ring, the massive Hell in a Cell hanging over his head. He requested on Twitter that his match against Roman Reigns inside the Cell happen tonight instead of Sunday, and that wish was granted. He says he knows that Roman accepted this match on Twitter, but he wants to hear it from the mouth of the Head of the Table himself. While Roman doesn’t enter, the cell does lower around Rey, trapping him in the ring. Only then, does the Universal Champion make his entrance. Notably, without Jey Uso at his side.

Roman says he doesn’t want to hurt Rey, because honestly, Rey isn’t ready for him. He asks Rey if he really wants to do this, and Rey says he’s never been more ready in his life.

With Sami Zayn on commentary, Apollo goes right for Big E, but Big E grabs him with a suplex. Big E tags in Owens, and the two deliver a splash and senton combo for 2. Owens tags in Big E, who slams Apollo with a back suplex. Big E looks for a suplex, but Big E escapes and tags in Azeez, who strikes with a knee and big boot. Big E rolls to the outside, where Azeez grabs him and slams him as we go to commercial.

When we come back, Azeez is in control of Big E, slamming his face into the turnbuckle. The Commander delivers a suplex, and looks for an elbow drop, but Big E moves out of the way. Azeez tags in Apollo, who hits Big E with an enziguri. Apollo tries for an apron Death Valley Driver, but Big E reverses it into a slam on the apron. He tags in Owens, who hits a Swanton Bomb for 2.

Owens hits a Pop-Up Powerbomb, but Apollo kicks out. Azeez comes in, headbutts Owens, drags Apollo to the corner and tags himself in. He clotheslines Big E on the outside, then drags Owens outside and slams him into the ringpost. Owens runs back in but gets caught immediately by the Nigerian Nail, getting Azeez and Apollo the win.

After the match, Azeez hits Owens with another Nigerian Nail, which Sami calls karmic justice.

Backstage, a coughing and wheezing tells Adam Pearce and Sonya Deville to give him Sami Zayn. They tell him he’ll have a match against him on Sunday, at Hell in a Cell.

The match gets underway after a sick guitar solo by Rick Boogs, with Corbin going right after Nakamura to start the fight for the crown. Nakamura fights back with a kick to the back and a sliding German suplex, before dancing with Rick Boogs as we go to commercial.

When we come back, Corbin has Nakamura in a chinlock. Nakamura fights out, but Corbin catches him with a Deep Six for 2. The King beats down Nakamura and taunts him, but when he goes for a slam, Nakamura reverses it into a backstabber followed by a sleeper hold. Corbin fights out, but Nakamura strikes with a sliding knee for 2. Corbin gains momentum back with a back suplex for 2, but when he goes for End of Days, Nakamura reverses it into Everything is Evil for 2. 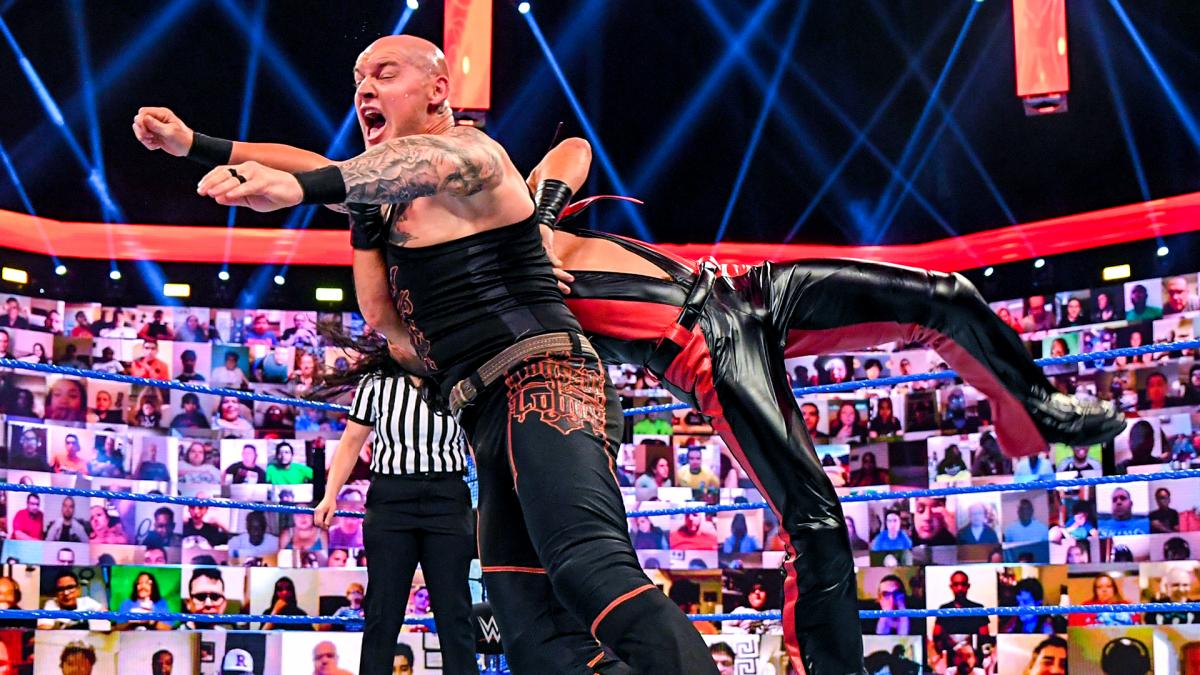 The King of Strong Style looks for the Kinshasa, but Corbin turns him inside out with a clothesline instead. Corbin puts Nakamura up on the second rope, but Nakamura fights him away and delivers a series of flying knees. Nakamura sets up and delivers a brutal Kinshasa to pin Baron Corbin and become the One True King of WWE.

Bianca Belair comes out and says that Bayley is just like a bully, she dishes out the insults but she’s unable to take them. She says that Bayley’s mind games did make her second guess herself for a second, but she doesn’t care what other people think about her, she is unapologetically herself. The champ announces that she wants Bayley inside Hell in a Cell this Sunday.

Bayley makes her entrance, and immediately attacks the EST of WWE. Belair tosses Bayley outside before slamming her challenger into the announce table. Bayley grabs the braid of the champ and slams her into the barricade, before bringing her back into the ring and hitting her with a running knee and Face Plant. Bayley grabs and holds up the SmackDown Women’s Title, and I assume this means that she’s accepted the challenge.

Roman Reigns sits in his comfy chair, and Jimmy Uso approaches him. He says that he might not agree with everything that Roman says, but they’re family. Roman asks him where Jey is, but Jimmy says he hasn’t heard from him all week. Roman sends him to go find Jey.

Chad Gable takes a cheap shot at Dawkins before the bell rings, and Dawkins chases him around the ring. However, on the other side of the ring, he meets a clothesline from Otis instead. The two toss Dawkins’ bad arm into the steel steps, before Chad hits a diving knee on the same arm. Otis brings Dawkins back into the ring, and he and Chad deliver a devastating Discus Clothesline/German Suplex combo.

Winner: There just wasn’t a match, I guess

Kayla Braxton interviews Cesaro, asking him if his rivalry with Seth Rollins has gone too far. Cesaro says it hasn’t gone far enough, because Rollins tried to take the career the Swiss Cyborg loves away from him. Rollins shows up to tell Cesaro that he disgusts him, and that he’s a disgrace. He says Cesaro doesn’t deserve respect after his actions last week, and that he’ll put him in his place last week. Cesaro says he doesn’t respect him as a competitor, and he tells him he’ll see him Sunday, before shoving him out of his chair and walking away.

Rey Mysterio immediately goes to the outside and grabs a chair, slamming it into Romans’ back. The champ grabs the chair away from Rey and pursues him around the ring, but Rey sprays him with a fire extinguisher before slamming it into Roman’s skull. Rey grabs a toolbox from under the ring and bounces it off Roman’s head before we go to commercial. 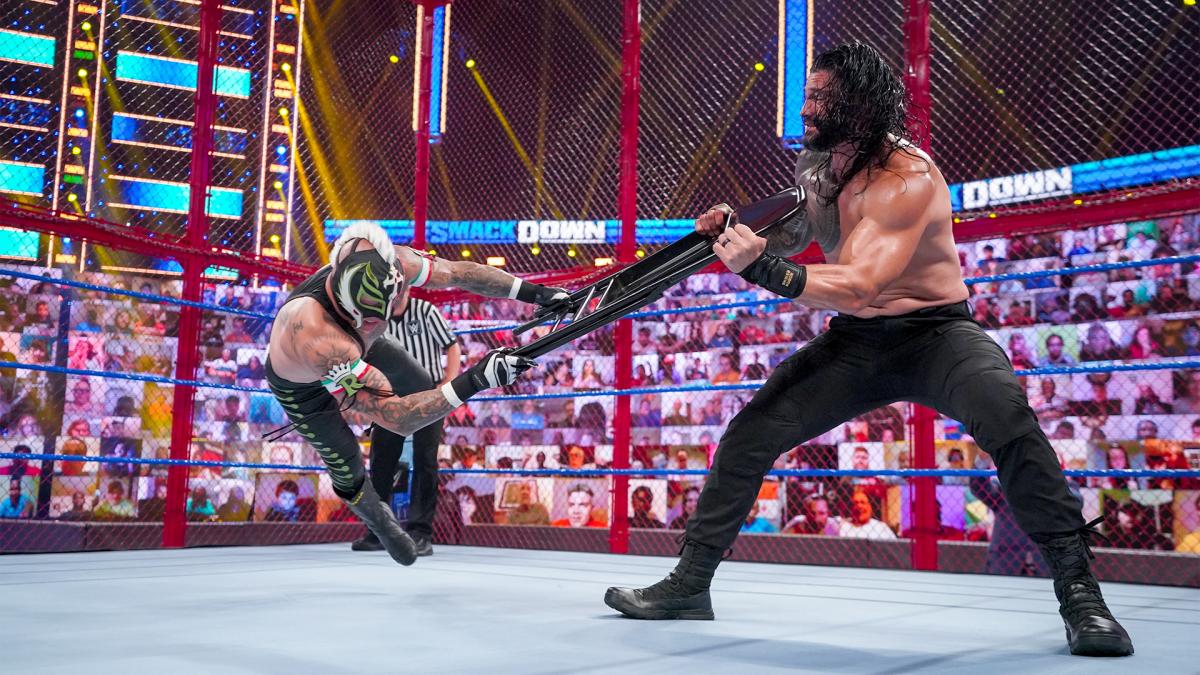 When we come back, Rey has got the chair back, and he’s attacking the midsection of the champ with it. Roman sits down on the apron to regroup, but Rey places the chair on the back of Roman and hits a sliding dropkick on it. Rey chokes Roman with his boot before putting the chair around the neck of Roman and shoving the champ into the wall of the cell. Roman gets a chokehold on Rey and headbutts him, creating some separation.

Roman tries to spear Rey through a table that’s set up vertically on the side of the cell, but Rey moves out of the way, and Roman crashes through it. Roman regains some momentum with an elbow, and he counters a sunset flip powerbomb attempt as well. Roman goes for a powerbomb of his own, but when Rey tries to reverse it into a hurricanrana, Roman simply swings him into the cell wall, before tossing him face-first into it as we go to commercial. 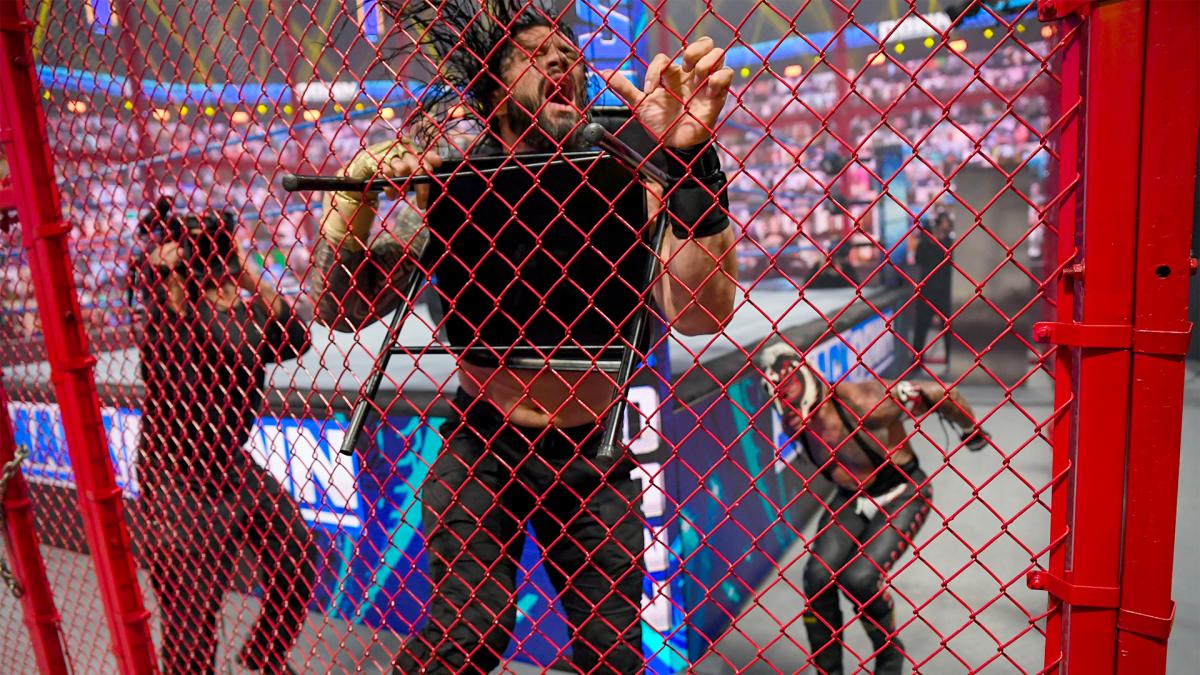 Rey Mysterio really broke out some brutal moves tonight. Not bad for his first Hell in a Cell. Photo: WWE

When we come back, Roman is in control, tossing verbal barbs and knees at Rey. The champ puts Rey on the ground with a Superman Punch, and he looks for a spear, but he gets stopped cold by a dropkick. Roman tries for a powerbomb, but Rey puts him in position for the 619. Roman counters with an uppercut, but Rey sets him up for it again, and hits it this time. He grabs the chair and beats the Head of the Table down with it, before placing the chair on top of him and delivering a Frog Splash. He goes to the top rope and delivers a second Frog Splash, but Roman still kicks out at 2.

Rey looks for a flying senton, but Roman catches him and delivers a powerbomb out of the ring and right into the wall of the cell. The champ brings Rey back into the ring and locks in an inverted Guillotine Choke, and Rey is forced to tap out.

After the match, Jimmy Uso comes out and raises the hand of the reigning Universal Champion. However, Roman isn’t done, as he puts Rey back into the inverted Guillotine, before whispering “Happy Father’s Day” to the practically unconscious Rey Mysterio.

An alright show, all around. I’m super unclear on why the Hell in a Cell match was moved from Sunday to today, but whatever the actual reason, Rey’s passion in his promos made me (mostly) truly believe he wanted it to be moved so he could get his hands on Roman sooner. I suppose as long as there’s good promo work to back it up, card changes don’t really matter in the long run, at least to me. It’s not like the actual action in the match would be different whether it’s on one day or the other.