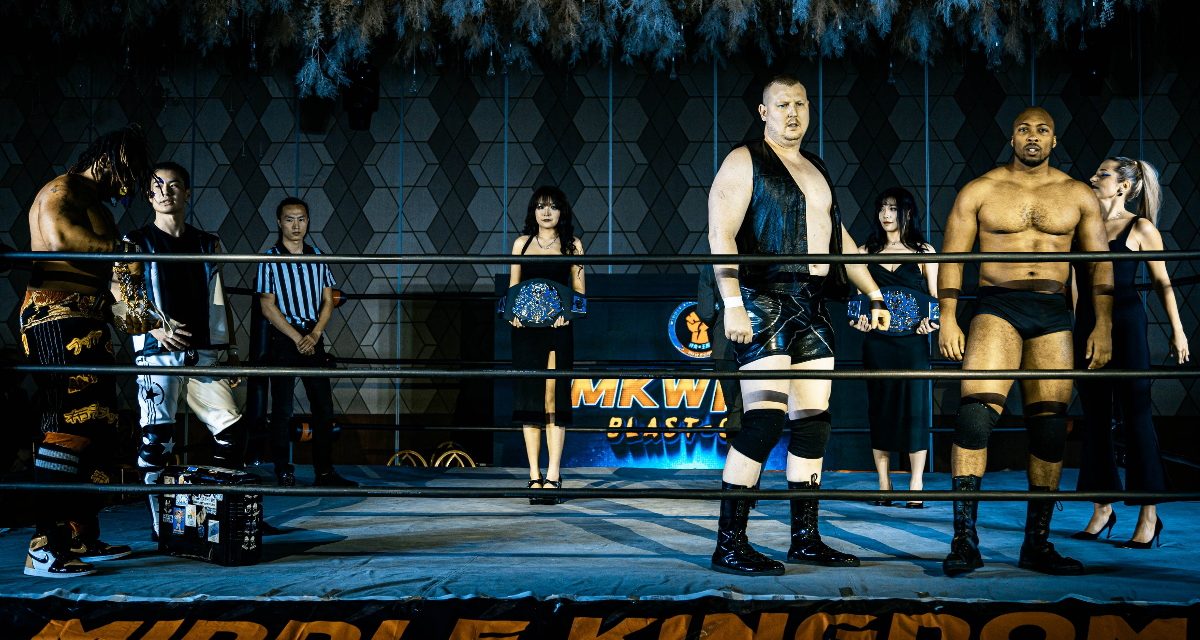 This week, the inaugural Tag Team Champions are crowned in the finals of a tournament that has gone on for the past couple of weeks.

Things start with a cold open prerecorded promo featuring Big Sam and Uncle Money of The Stable are interviewed by Jim Murray about their shot at the Tag Team Titles in the finals of the tournament today. They are confident going into the match with C2NY.

After the intro XiaoJieMen recaps last weeks episode and runs down this weeks lineup.

Big Sam, Uncle Money and Queen Marie escort Stablemate Ash as he enters. The importance of the tag title match later is clear as they retreat to the back when he’s midway down the ramp when he would normally have some help at ringside. 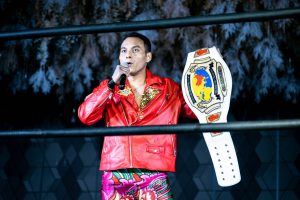 Once in the ring Ash gets on the mic and explains how hard he fought for his Belt and Road Championship and is a prophet whose prophecy finally came true. He makes another Biblical reference saying the first Chapter in the book of Ash has been written after he defeated Jyunyan Lee last week and sent him to the hospital.

The match starts unceremoniously when the Whips get in their opponents faces with shoves and pie-faces. They get expelled outside by ATD. Connor mistakenly slides back in alone and gets double teamed while Holmes stays on the outside tactfully, fearfully and selfishly. Holmes enters and runs at ATD unsuccessfully after they turn to him after dispatching Connor outside when he could have blind sided them.

Holmes gets double teamed and humiliated until Connor helps him in an evasion off the ropes and kicks Cui right in front of the ref who doesn’t seem to care. They isolate Cui until he breaks through a double clothesline attempt and lines both Whips himself before tagging out. 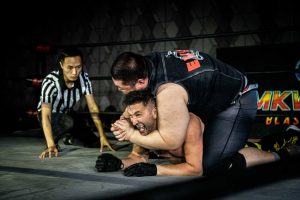 Saga comes in and handles both opponents solo. He hooks a crossface on Connor but Holmes breaks it up with a double stomp. Saga takes control again but Holmes kicks out of a GTS from Cui and STO from Saga.

Saga misses a top rope splash while Connor incapacitates Cui and then comes in to assist Holmes hit his Senton on Saga for the finish.

Steve looks for a test of strength but backs away until finally booting Aegon in the gut. Steve utterly dominates Aegon until he kicks Steve as he attempts a backdrop. Aegon takes control and hits a series of moves. 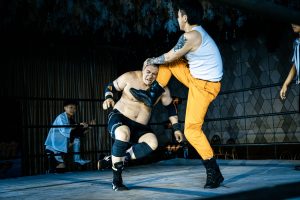 Aegon rakes his laces across Steve the ESL Teacher’s face.

Tao jumps up on the apron distracting Aegon and hot shots him behind the ref’s back allowing Steve to hook in a school boy with a rope assist for the win.

A recap package of the entire Tag Team Title Tournament brings us to the main event.

C2NY jump The Stable to start. The uncharacteristic preemptive strike must be a response to the dirty tactics they’ve seen and experienced leading up to this. But as things spill to the outside The Stable turns things around.

The bell finally rings with Sam and Buffa on the outside as Chen wails on Money with fists in a guard position.

Chen gets cut off in a similar manner to the last tag match as Sam hits him with a knee from the apron as he runs to the ropes.

Money receipts the fists and showboats with pushups annoying Buffa who almost steps in.

The Stable does their thing all getting a piece of Chen as they keep him isolated.

Buffa finally involves himself when Sam has Chen stalled over head head in a press slam, causing Chen to land on Sam pinning him for two.

Chen crawls to Buffa for the tag. Buffa enters off the top with a cross body onto Sam. He knocks Money off the apron and continues his attack on Sam. Sam turns things around when he feints a clothesline but nails a follow up then tags Money.

Buffa bows up on Money as he approaches with a flurry of forearms but gets caught with a spinebuster that gets a two. Buffa continues to show fighting spirit as Money hits numerous slams for nearfalls.

Money locks in a sleeper but Buffa is wide awake. As he fights up Sam comes in to help shut him down.

Sam gets in and hooks in a half Boston crab that he gets help with from Money behind the ref’s back. As a frustrated Buffa comes in the heels switch illegally. Buffa evades and strikes his way out of the Stable’s corner and rolls to Chen for a tag.

Chen comes in on fire and puts Sam down with his best kicks and offense, Money has to break up the pin.

All four men are in and The Stable takes control. They set up Buffa for their Stabilizer but Chen scales Buffa and Sam to clobber Money who is standing on the ropes in the corner.

C2NY lights up The Stable in opposite corners. After a separation Money goes for the spear but Chen and Buffa both move and Sam succumbs to the tackle leading to a Super X factor by Buffa followed by a frog splash by Chen both on Sam for the finish as Money is prone outside with a headache from cranium kicks. 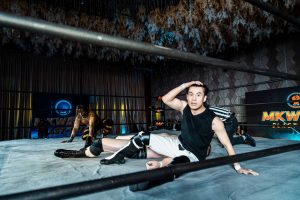 Ups and downs but a strong finish.

Repetition and ineffective ref’s are back this week. But the main event ended up being quite solid once it got going.