SmackDown: How could you do this? 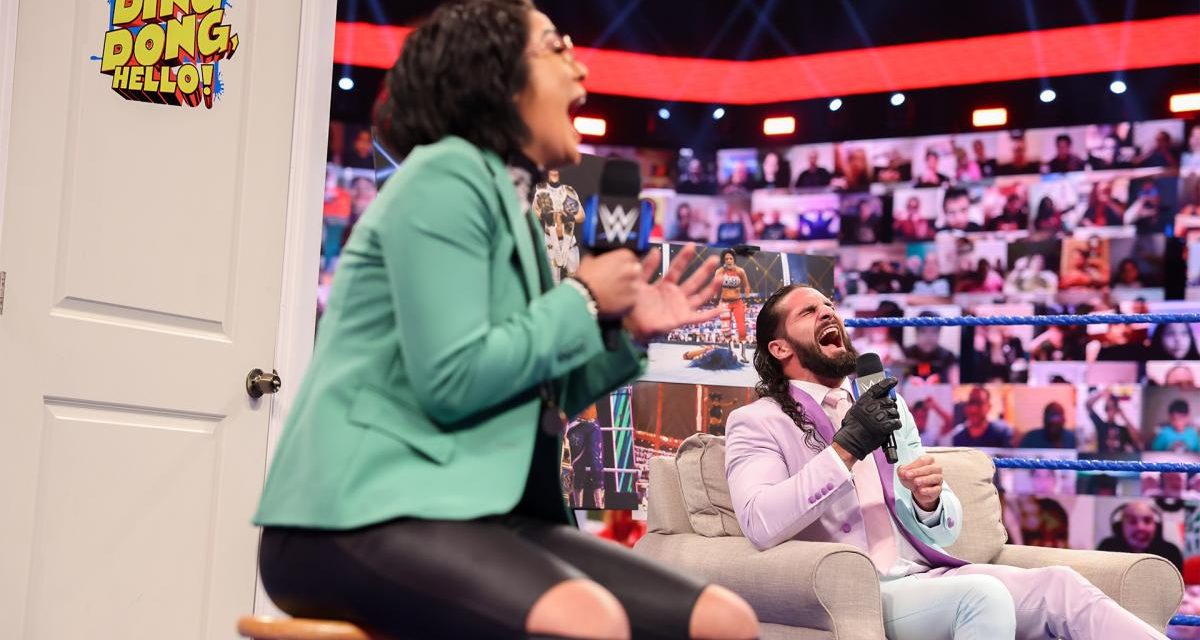 Roman Reigns and Jimmy Uso, sitting in Roman’s dressing room, start off the show, and I start off the show with hiccups. Roman asks Jey what is the one thing he won’t stand for, and Jey answers with “embarrassing the family.” Roman says he knows that Jey understands that, but he asks if Jimmy does.

Jimmy makes his entrance, and we go to the ring. Jimmy’s upset, because right now, he’s supposed to be a 7 time tag champ. But instead, Roman messed it up for him. Jimmy says that Roman is jealous of him, because the Usos want to represent the family as well. He says that Roman is trying to tear Jey away from him. Jimmy finishes the promo by saying that tonight, he’s going to do something he won’t regret.

Backstage, Jey catches up with Jimmy. Before Jey can say anything, Jimmy asks him if he really thinks they could’ve won. Jey says nothing, but Jimmy knows what he’s feeling: he was upset they got disqualified. Jimmy says that Jey turned on his own brother, and that Roman is disgracing the family. Jey asks him what he expects him to do, he’s stuck in the middle of Roman and Jimmy’s argument. Jimmy tells him if Roman wants to see him, he’ll be in the Usos’ locker room.

Kevin Owens starts off against Apollo, but he takes a cheap shot at Sami before brawling with Apollo. K.O. hits Apollo with a back elbow before going to the outside and slamming Sami into the barricade. He goes back into the ring and hits the Intercontinental Champ with a clothesline and a senton. He goes back outside and beats up Sami some more, but when he goes back into the ring, Apollo stomps him down. He tags in Sami, who beats Owens down in the corner.

Sami tags the champ back in, and Apollo strikes with a snap suplex for 1. Apollo tags in Sami, and Owens tries to rally, but Sami spears him into the corner and tags in Apollo. Owens is able to evade Apollo to tag in Big E, who tosses Apollo with a series of belly-to-belly suplexes. Big E goes for a Big Splash, but Apollo gets his knees up. 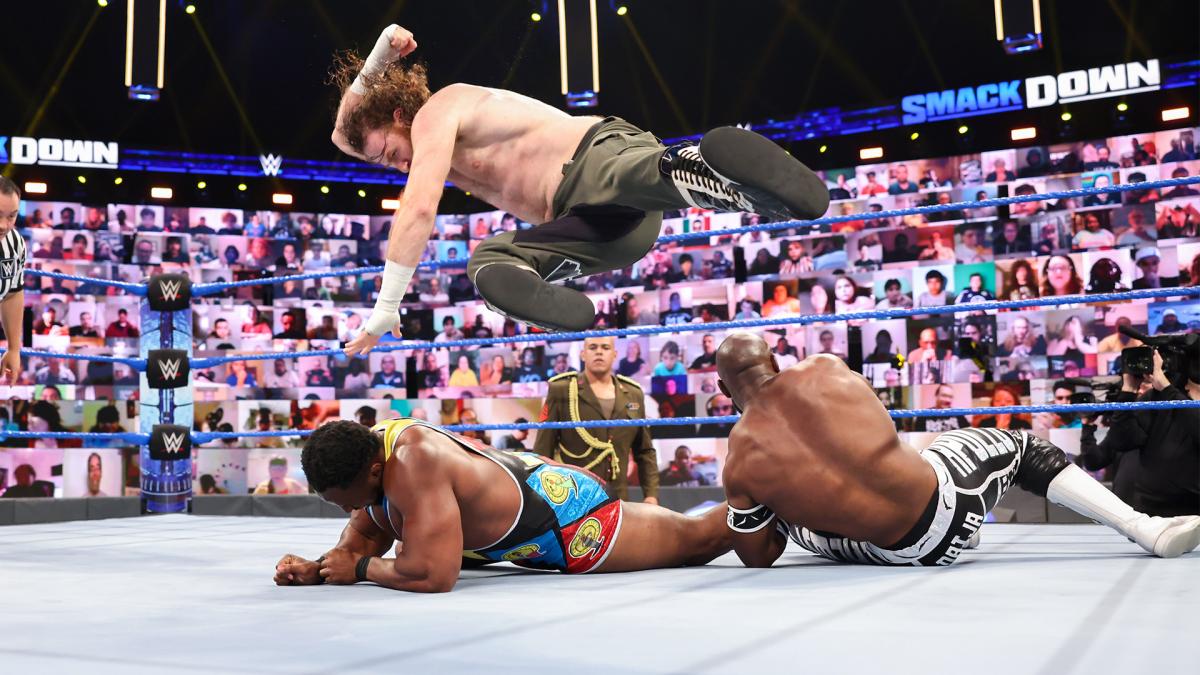 The champ looks for a crossbody, but Big E moves out of the way. Both competitors tag in their partners, and Owens flies in with right and left hands. K.O. stomps Sami down in the corner, and when his former friend goes to the outside, Owens dives off the apron with a cannonball before delivering a senton. He drags Sami back in and delivers another cannonball, followed by a Swanton Bomb for a close 2. Owens stacks Sami up on the top rope, but Sami avoids K.O.’s plans by diving over him and tagging in Apollo.

Owens hits Apollo with a Pop-Up Powerbomb, but Sami breaks up the pin. Sami tags himself in and delivers a brutal half-and-half suplex for a close 2, before hitting the Blue Thunder Bomb. Big E breaks up the pin, and when Apollo comes in after him, Big E clotheslines the champ, sending them both out of the ring. Sami looks for the Helluva Kick, but Owens dodges it and hits a Stunner for the win.

After the match, Apollo grabs a mic, livid that his team lost. He says that the only reason he lost is because he had Sami on his team. He challenges Big E and Owens to another match next week: them versus Apollo and Azeez. Big E and Owens accept, but Sami comes in, angry that he was just insulted. He goes on some crazy conspiracy rant, but Azeez grabs him and hits him with a Nigerian Nail.

Chad Gable finds the Street Profits backstage to apologize for Otis’ actions. He says that Otis can be a little overprotective at times, and as an apology present, he cancelled their tag match tonight. Ford gets offended that Gable acts like he’s doing them a favor, so Gable challenges him to a singles match, where neither Otis nor Dawkins are at ringside. Ford accepts, and Gable leaves them with a warning: Otis is still angry.

Jey Uso comes back to Roman without Jimmy, and Jey tells him where Jimmy is. Roman asks Jey why Jimmy would put him in the middle of their disputes like this, and Jey has no answer. The Universal Champ tells Jey to tell his brother that he’s coming to him.

Man, Liv Morgan’s theme song is just so darn good. Liv goes right after Carmella with a brutal right hand, before stomping her down in the corner. Liv goes for a double knees with Carmella on the ropes, but Carmella dodges by going to the outside, before pulling Liv to the floor and spearing her into the apron.

Carmella brings Liv back into the ring and rocks her with back elbows in the corner. The self proclaimed “Most Beautiful Woman in WWE” rains rights and lefts down on Liv and pins her for 2, but Liv hits a modified backstabber before slamming Carmella into the turnbuckle. She tries to keep up the offense, but Carmella hits a sickening boot to the face of Liv. Carmella taunts and slaps Liv, which earns her a ObLIVian from Liv, getting the 3 count for Liv.

Bayley hosts “Ding Dong, Hello!” with special guest Seth Rollins. I’m pretty sure that Seth is the only person who’s ever willingly committed to the go behind the door bit that Bayley does. Seth says that he’s a huge fan of Bayley, and she’s going to mop the floor with Bianca Belair at Hell in a Cell. Rollins plays the clip of Bayley’s face occupying the whole ThunderDome from last week, and they both have a good laugh over it. Bayley plays a clip of Rollins attacking Cesaro, and they have a great laugh over that one as well.

The doorbell rings, and Rollins goes and answers it. It’s Cesaro! The Swiss Cyborg drops Rollins with a right hand, and tosses him into all the set pieces, ripping his fancy suit in the process. Bayley tries to clean up her set, and as she does, Bianca Belair makes her entrance, and laughs in her face.

Megan Morant interviews Rey Mysterio, who says that Dominik is badly hurt. He says he doesn’t care how big you are, if you come after his son, Rey will come after you. He says he’s going to call Roman out tonight, and he’s going to show him what family is supposed to look like.

Gable quickly outwrestles Ford, whipping him across the ring. Ford returns the favor and mocks Gable, infuriating the Olympian. The two trade standing switches, and Ford locks in an arm wringer. Gable completely out-wrestles Ford, reversing Ford’s submission locking in his own.

Ford gets out, and the two trade headlocks and arm drags, with Ford getting the best of the exchange with an armbar. Gable fights out and buries a few right hands into the gut of Ford. Ford jumps over a charging Gable and delivers an arm drag. Ford rolls up Gable for 2, but when Ford goes for a leapfrog, Gable picks him out of the air with an ankle lock.

Ford reverses the submission into a roll up for 2, and sends Gable to the outside, before delivering a swanton onto the Olympian off the apron as we go to commercial.

A hop, skip, and a funny Geico ad later we’re back to the action, and Gable is driving Ford to the mat with a back suplex. Ford looks for a blockbuster, but Chad turns it into a Northern Lights suplex for 2. The two run from rope to rope and have a sickening collision in the ring.

Backstage, we see Dawkins cheering his partner on, but Otis attacks him from behind, slamming him into a crate. Back in the ring, Ford fires up, delivering a spinebuster/standing moonsault. Ford climbs to the top rope and delivers the From the Heavens Frog Splash. 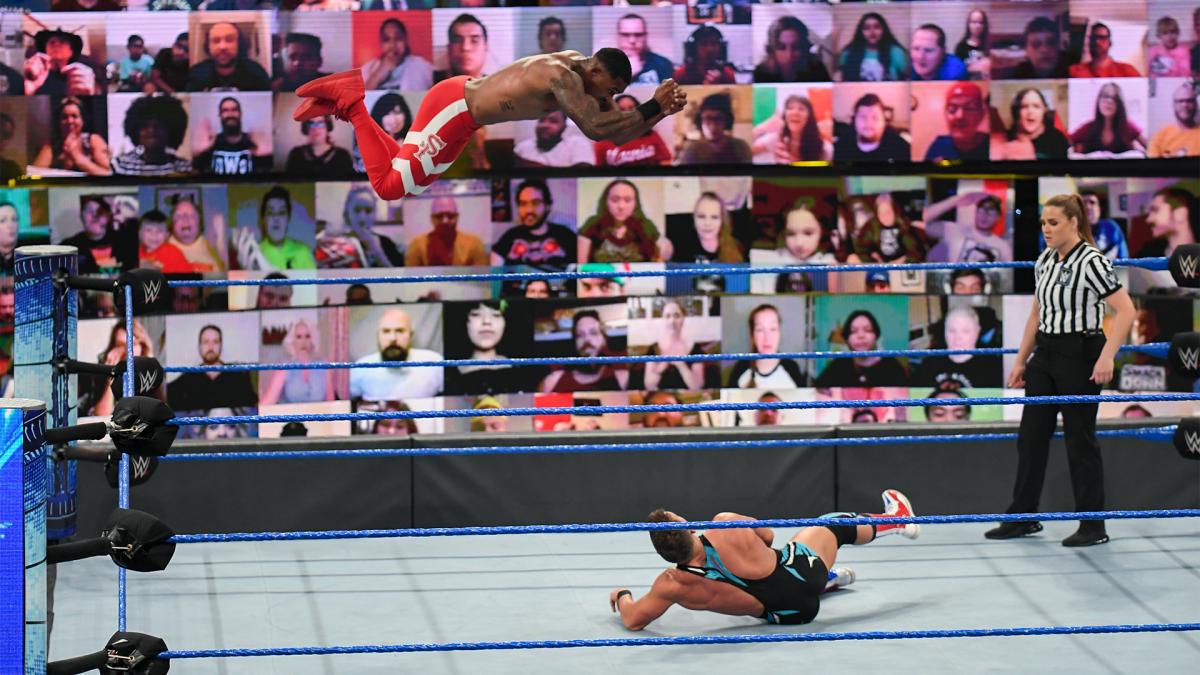 You can’t see his face, but I imagine that Gable is absolutely terrified here. Photo: WWE

Unfortunately for him, Otis comes in to break up the pin. Well, technically, he was too slow to break up the pin and Gable had to kick out to avoid losing and it was a really awkward botch, but who’s counting? Otis, now without a beard, makes up for his botch with a series of awesome splashes onto Ford, as well as a right hand to Dawkins, who comes out to try to save his friend.

Until the awkward ending, this was an absolutely incredible match. I’m really looking forward to this Alpha Academy/Street Profits feud.

Man, I love Rick Boogs, who plays a rockin’ solo to distract Corbin, allowing Nakamura to hit a kick and deliver Good Vibrations in the corner. The King of Strong Style delivers a flying knee for 2, and he looks for the Kinshasa, but the crownless King reverses it into Deep Six for a close 2 count. Corbin delivers a devastating German suplex for another close 2 count. Corbin tries to use the same rollup he used to win last week, but Nakamura reverses it into his own rollup. 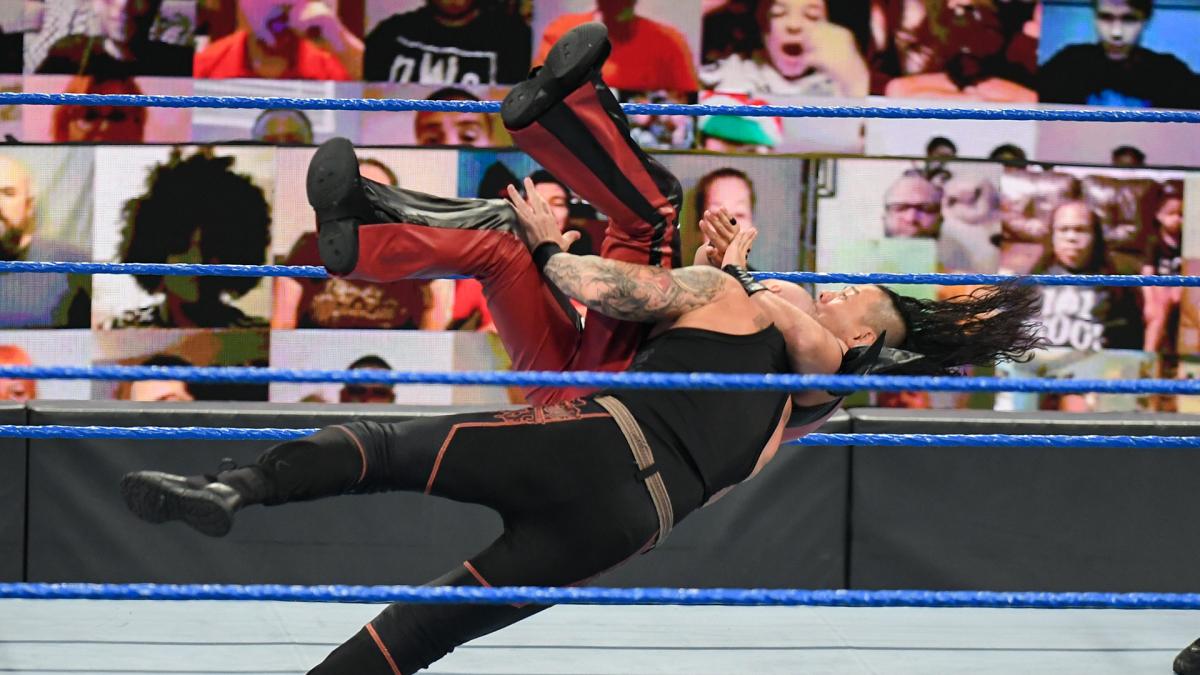 After the match, Corbin attacks Nakamura, and goes to get his crown. Boogs gets in his way, so the King takes him out as well. Corbin grabs the crown, but Nakamura picks it right off his head, and Boogs tosses Corbin over the announce table.

Corbin finds Sonya Deville and Adam Pearce, and demands that they have Nakamura give the crown back. Instead, Pearce says that next week, since they’re even at 2 wins apiece, Corbin and Nakamura will have another match, with the crown on the line.

Jimmy Uso gets a visit from Roman and Jey. Roman shows his Universal Title off, but Jimmy says he doesn’t care, he cares about what’s in Roman’s heart. He says he’s had to watch Roman abuse Jey for a year now, and he’s fed up with it. The two begin to argue, and Jey, who’s standing between them, tells them both to chill out. He says he’s tired of both Roman and Jimmy, and he leaves.

Jimmy says that he’s ready to fight Roman, and Roman delivers an incredible and passionate speech chock full of gaslighting, asking how Jimmy could just let Jey walk away, when he’s supposed to protect him as the older brother. He tells Jimmy to go make things right, and Jimmy goes to find Jey.

Rey Mysterio comes out to the ring and grabs a mic. As promised, he calls out Roman Reigns. Roman enters, and Pat McAfee calls him the greatest wrestler on this rock floating through space, which is a super fun compliment. 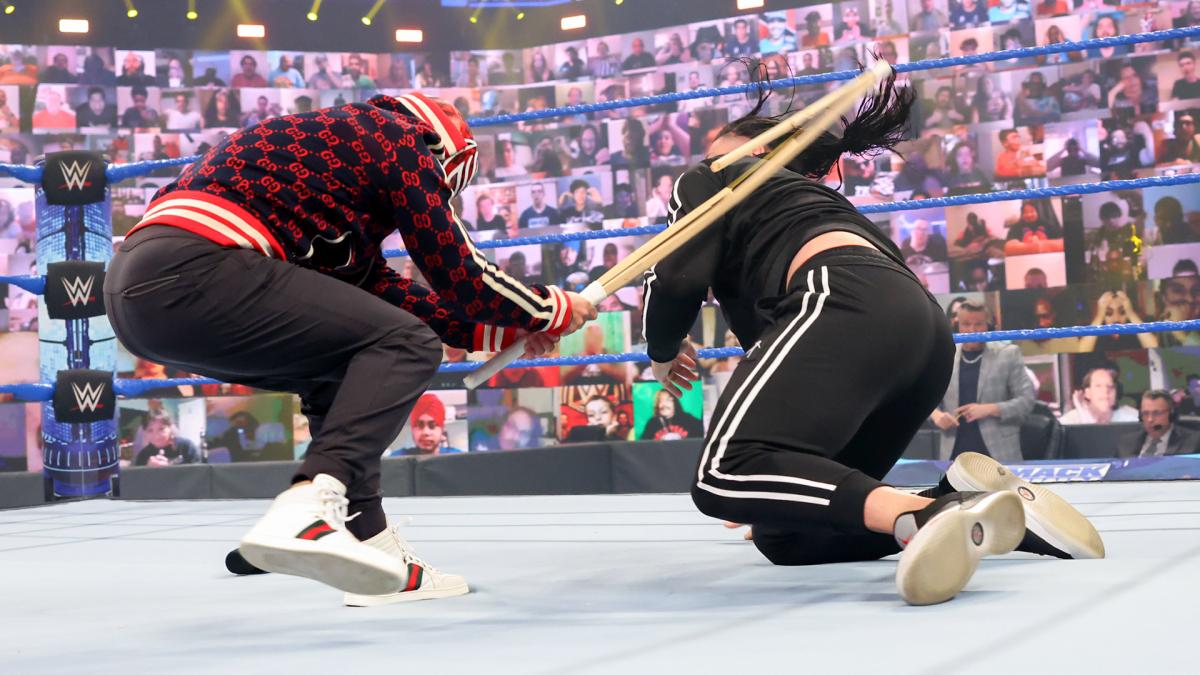 Rey Mysterio uses a kendo stick to get some revenge on Roman Reigns for the Universal Champ’s attack on Dominik last week. Photo: WWE

Roman picks Dominik up for a powerbomb, but he tosses him right to the outside of the ring. Rey tries to protect his son, but Roman hits him with a kick. Both Mysterios lay writhing on the ground as the screen fades to black.

That Roman Reigns promo was absolutely stunning. Truly some of the best acting I’ve seen on at least SmackDown in a long time, if not all of the WWE. Alright, you’ve got me, man. I’m truly invested in a Roman Reigns storyline. You better not mess this up though!