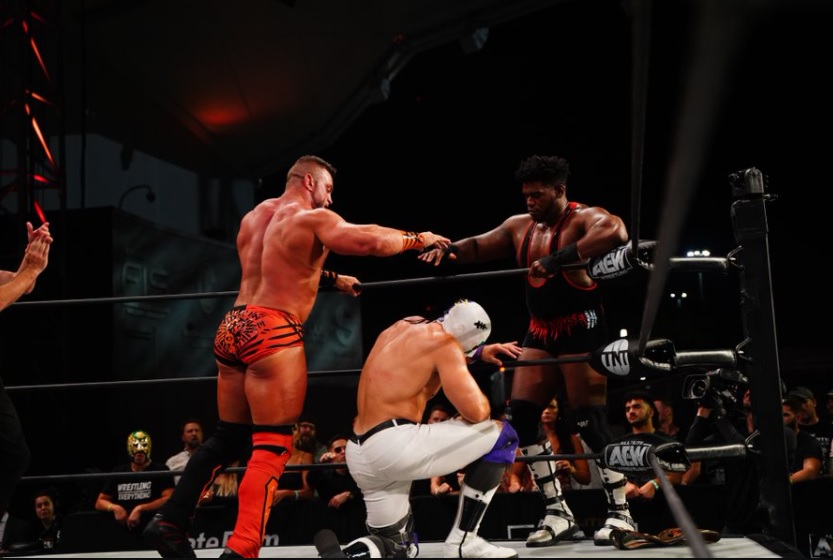 In a rare cold open, The Pinnacle pulls up to the building in a white limo, giving Jim Ross the opening he needs to reveal that business is about to pick up. Yep, the time-displaced AEW Dynamite is back for another late Friday edition, so let’s hustle to Daily’s Place and do this.

We’re hearing from Big Money Matt Hardy right off the bat, taunting Christian Cage for being jealous of his financial success. He’s sending Angelico after Cage in tonight’s first bout.

The announcers discuss what a shame it is that Hardy is such a great wrestler but keeps gathering people around him to do his dirty work. Hey, Matt isn’t getting any younger fellas. I’m going to have henchmen eventually too, though all they’ll have to do is type, not wrestle. Anyway, Angelico gets plenty of opportunity to show off his wide range of mat holds and submissions, which requires Christian to wrestle a bit of a different style than he typically does as well. Cage eventually gets in position to deliver the Killswitch after staring down Hardy first.

Hardy and his H2 goons storm the ring right after the bell, with Matt delivering a Twist of Fate. He has designs on another one but Jungle Boy rushes down to drive off the heels.

Tony Schiavone invites Cody Rhodes and Arn Anderson to the ring, along with Arn’s son Brock, who will make his in-ring debut tagging with Cody next week. The American Nightmare notes that though their fathers have set high standards, he thinks Brock can live up to them. Rhodes has revenge on his mind as well after getting pinned by Anthony Ogogo last week, except that QT Marshall takes exception to that, claiming he defeated Rhodes himself and talking some trash to Brock as well. Marshall says he wants to literally whip Rhodes’s ass, asking for a South Beach Strap Match next week. He’s not waiting until then to show off what he has in mind, though, removing his belt and sneaking in a cheap shot on Arn. Them’s fighting words … er, actions.

Callis settles in with the announcers, as usual, and reveals that Cutler is essentially an unpaid intern. Hey Florida, you may want to look into some possible labor law violations. The Bucks seems content to let him take a serious beating until they find the proper time to enter the fray with an advantage. Pac makes one of the least enthusiastic hot tags ever to Kingston, and poor Cutler takes several kicks from his own teammates but still keeps making saves. That’s one good intern. Cutler’s presence makes me briefly consider if the Bucks might take a rare ‘L’ here that will be Brandon’s fault. And yep, that’s exactly how it plays out.

The Good Brothers show up to try to do some damage after their buddies’ defeat, but Frankie Kazarian is Johnny on the spot to help the faces.

A video package shows Callis’ “evidence” of a conspiracy to take the world title belt off Kenny Omega. Not sure I’m convinced.

For the first time since losing at Double or Nothing, we’re going to hear from The Pinnacle. Looks like they’re all going to speak to their opposite numbers: FTR to Santana and Ortiz, Shawn Spears to Sammy Guevara, Wardlow to Jake Hager, and of course, MJF to Chris Jericho. The Pinnacle’s leader declines Jericho’s request for a match and lets loose on Guevara for a bit as well. Speaking of Jericho, he appears on the big screen for an immediate response, telling the Pinnacle they can brag about their promo while walking home. The Inner Circle vandalizes the limo something fierce, and somewhere, Vince Russo is smiling over this level of vehicular carnage. For the coup de grace, Hager smashes the car up even more with a forklift.

Darby Allin responds to Scorpio Sky and Ethan Page by telling them he won’t replace Sting as his partner, preferring to take them on in a handicap match instead. Despite Sting’s plea not to let the heels get in his head, insisting that Allin has nothing to prove, Darby asks Sting to stay home so he can take on this battle alone — and the Stinger says he will.

With Evil Uno getting a TNT Championship shot tonight, he narrates a video looking back at Brodie Lee’s connection to that belt and says he wants to be the one to bring it back to the Dark Order. That match is up next.

Much as I’d enjoy seeing Uno pull off an upset here, I’m thinking there’s no chance. At least Uno gets to wrestle up to and through a commercial break. There’s a nice sequence with the assembled Dark Order on the stage, with -1 urging Uno on. But this was destined to end only one way, and that’s with Miro retaining by sumbission.

Andrade El Idolo wears nice clothes and flies in private jets. That’s what I took out of this short video segment.

Schiavone is not here for Omega and Callis trying to tie Jungle Boy into their conspiracy, but Callis matches him indignant tone for indignant tone. Somewhat out of character, Omega pays some compliments to Jungle Boy, then reveals his true colors by throwing it back to Callis to question Jungle Boy’s guts. The champ doesn’t even think his challenger has anything to say, but he does: that Omega talks too much. A short brawl breaks out, with the Young Bucks saving Omega from ending up in the Snare Trap.

Sky and Page are incredulous about Allin’s decision to face them solo. The Men of the Year are confident they’ll put the hurt on him, though.

Oh no Chandler Hopkins, if that’s your real name. You’re getting served up on a platter here, as Archer makes short work of him and hustles to the back.

The Wingmen offer Orange Cassidy two choices: Let them rearrange his wardrobe or they will rearrange his face. Now that’s just rude.

Rose has been making fun of Hirsch’s height on social media, or so the announcers report. The fans really get behind Hirsch, which is great to see, and she does more than just mat work, even soaring off the top with a moonsault. The problem is the size disadvantage can be easily played up, which means Hirsch is taking a loss here. Props for absorbing that huge top rope powerbomb, though.

Schiavone plays his part as Dr. Britt Baker’s personal interviewer by getting her thoughts on Rose. She appears to be first in line for a title shot after idling for months.

Brian Cage and Powerhouse Hobbs vs. “Hangman” Adam Page and The Dark Order’s 10

Taz is at the announce table to keep an eye on his charges, who are definitely not the fan favorites in this main event. Much is made of how over Page is, which is both true and interesting considering he’s not getting pushed in the world title picture. You have to figure he and Omega will be electric whenever they end up in a program, considering their history as a tag team. Ricky Starks and Hook try to help their teammates cheat to win, leading to Starks slapping Cage, who angrily pursues him back up the tunnel. Hobbs does his best to fight alone, but the good guys inevitably prevail.

Winners: Adam Page and 10 by pinfall

And except for some celebrating, that’s it for tonight.

This was the least compelling Dynamite since it’s been moved off it’s normal night and time. Just a little dizzying in terms of promo segments and nonstop pushing of the Saturday night card in two weeks. Hyping up pay-per-views is wrestling tradition, but using a TV show to sell an upcoming episode of the same show is not as kosher. On the plus side, the Saturday episode is shaping up nicely, so there’s that.