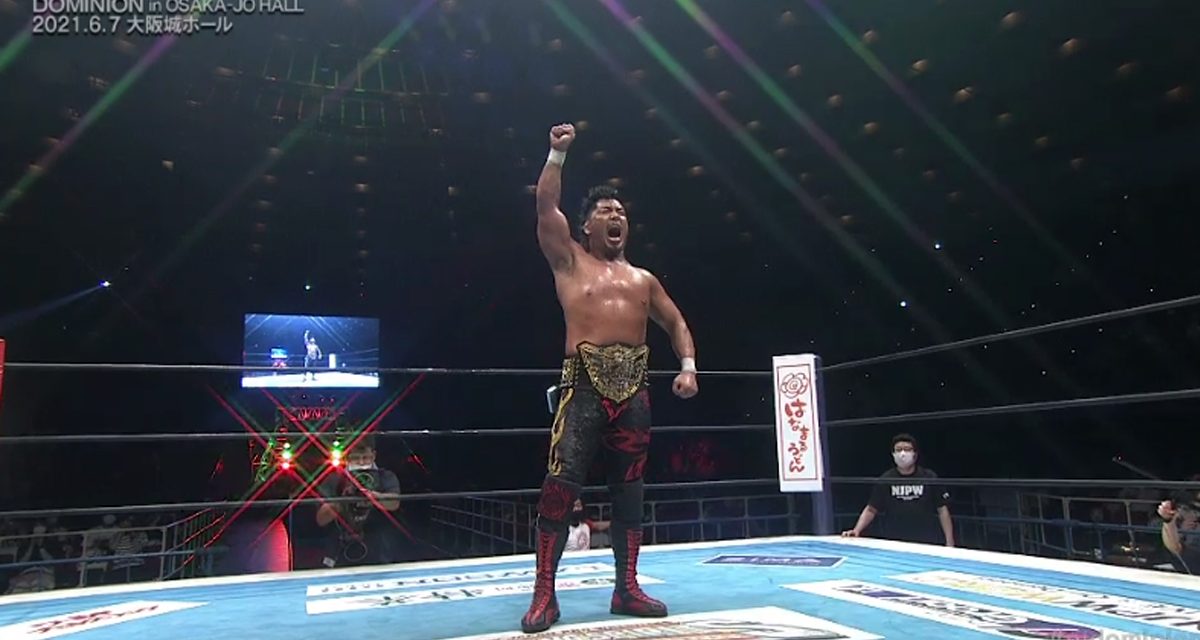 Halfway through the match, a desperate Okada sought to give Takagi a Tombstone Piledriver on the floor. Powerhouse Takagi turned the tables punishing Okada with a Made in Japan on the concrete floor. Okada just made the official’s count by rolling back into the ring at 18. 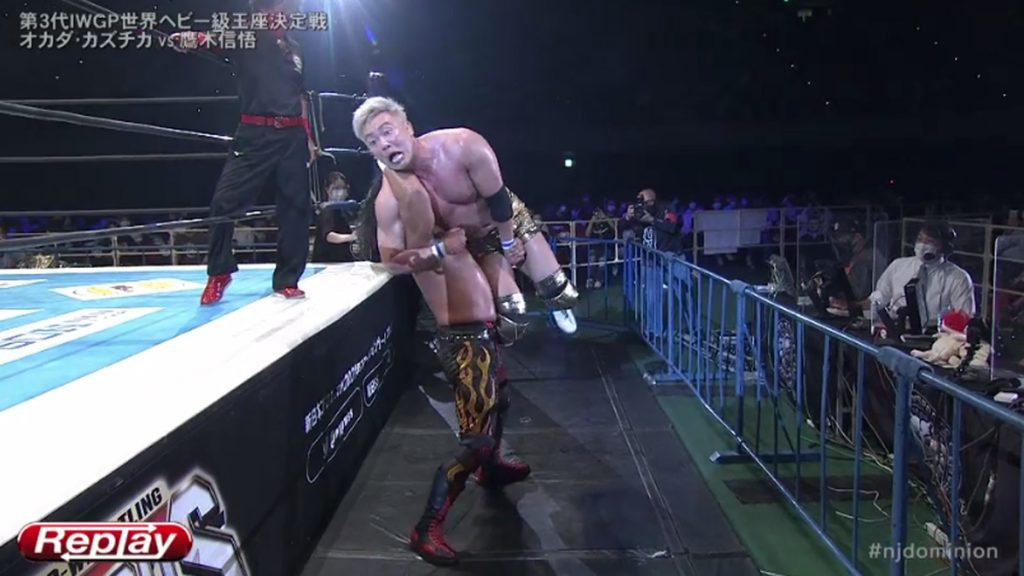 Shingo hoists up a stunned Okada for a Made in Japan on the arena floor. Courtesy: NJPW.

A running clothesline in the corner doubled Okada over. Takagi hit another power move on Okada driving him to the mat with a Stay Dream (a modified Olympic Slam) from the top rope for a two count.

Shingo avoided a Rainmaker Clothesline with a Pumping Bomber clothesline of his own. The impact of a running, sliding fist to the face from Shingo echoed throughout Osaka-Jo Hall. A Last of the Dragon on an astonished Okada won Shingo the championship.

When Ibushi did arrive Shingo told him that life works in strange way sometimes. 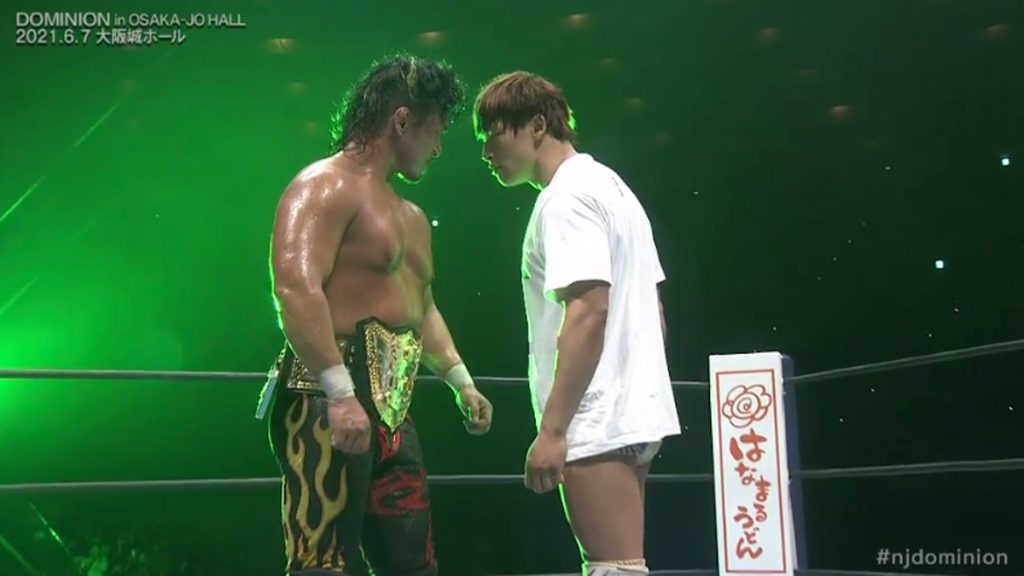 “Two months ago you had this belt and I couldn’t do anything about it. Now, I have the belt and I am calling you out. There is just one thing I want to say to you. Are we going to fight for this title? Yes or no? I want your answer right now,” said Takagi to Ibushi.

“Let’s do it!” replied Ibushi.

In the other championship match of the evening it was El Desperado retaining the IWGP Jr. Heavyweight Champion against Roppongi 3K’s Yoh.

El Desperado treated Yoh like a Young Lion at the start. He dragged him around the ring by his ear and mocked him. Yoh waved his finger in Desperado’s face when he tried to drop kick his knee out from under him.

Desperado took the fight to the floor throwing Yoh into the ringside barricade. He reached under the ring pulling out a plastic bucket. He looked at it for a brief moment and then hurled it away. The official rushed off to retrieve the bucket. Desperado seized the momentary distraction to wail on Yoh’s knee with a steel chair.

The knee hobbled Yoh as he battled back. Yoh gave Desperado a taste of his own medicine with a dragon screw leg whip. An angry Yoh wrenched , drop kicked the knee causing Desperado to shriek in pain. Both men ended up on the mat nursing their injuries. One solid right hand knocked Yoh silly and a Pinche Loco pinned him. 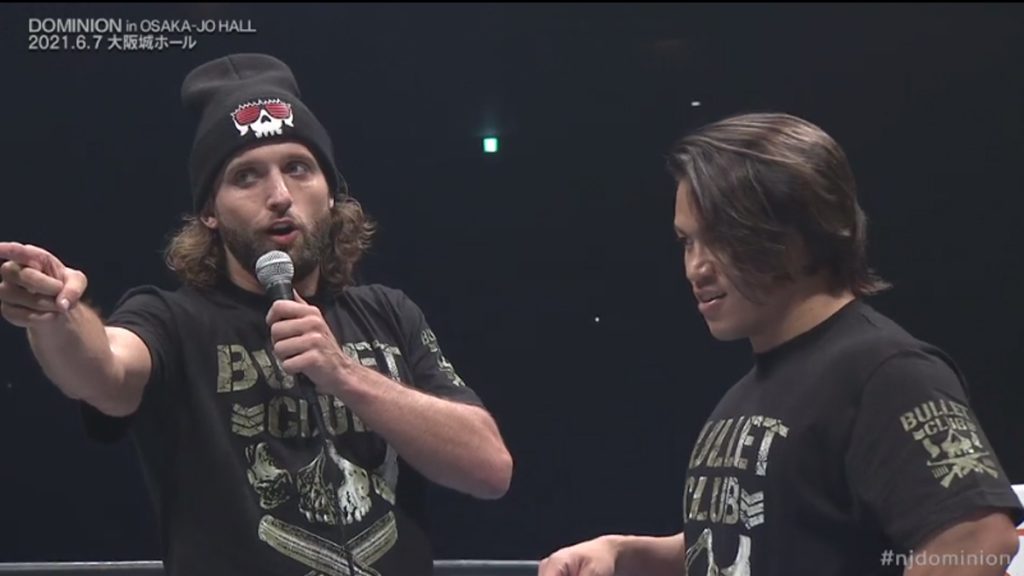 El Phantasmo and Taiji Ishimori have something to say. Courtesy: NJPW.

El Phantasmo, Sho and Taiji Ishimori come down to the ring. Sho stood over his fallen partner protecting him.

“Settle down you dumb mark. We aren’t here to beat you up,” said El Phantasmo to Sho.

Phantasmo announced that he and Ishimori are challenging Roppongi 3K for the IWGP Junior Heavyweight Tag Team Championships at the Kizuna Road event.

Ishimori took the microphone from Phantasmo to issue a challenge to El Desperado for the IWGP Jr. Heavyweight Championship as well. Ishimori claimed Bullet Club will take all their gold.

Dick Togo makes his presence felt by tripping up and holding Ishii from outside the ring. Togo also removes one of the turnbuckle pads so that Ishii can be thrown into the exposed steel. Togo chokes Ishii out with his garotte from the apron. Ishimori ends things abruptly with a Bloody Cross on Sho. Evil smacks Goto in the head with one of the Never Openweight Six-Man Tag Team belts as Togo chokes out Ishii again. Evil puts Ishii in the Scorpion Deathlock while the rest of Bullet Club swarms the others.

Rocky Romero comments on Bushi’s mask which he says is a tribute of sorts to one of the founding members of Los Ingobernables in Mexico: La Sombra. La Sombra is better known in North America as Andrade. Naito goofs on the official a couple of times taking him down with leg sweeps. Sanada slips out of a pin by Zack and rolls him up instead. Naito and Sanada issued a challenge to the Dangerous Tekkers for their tag titles.

It is expected that whomever wins this might be in line for title shot. The match doesn’t really live up to the hype and there a few blown, awkward moves. Cobb’s strength and hard shots to the head and body drive the smaller Ibushi out of the ring early on. Cobb manhandles Ibushi smashing his back into a steel post. Cobb takes the time to ask The Great-O-Khan for a United Empire towel to wipe his brow. When he is done he hangs it over the top rope.

Cobb finally makes a mistake with his standing moonsault. Ibushi drives his knees into Cobb’s gut as he lands. Ibushi hits a top rope springboard splash to the arena floor on Cobb. Cobb kicks out of one Kamigoye so Ibushi lowers his knee pad. Cobb though lands his Cobbigoye but he cannot follow up with the pin. Cobb finally crawls over to make the cover. Ibushi kicks out. A Kamigoye without the knee pad scores Ibushi the win.

Although it was a decent card and job by all, the event came off as lacking. That is mostly because the headline matches just didn’t reach the level of greatness that they should have. There was just nothing really special or memorable here except for Shingo’s win.