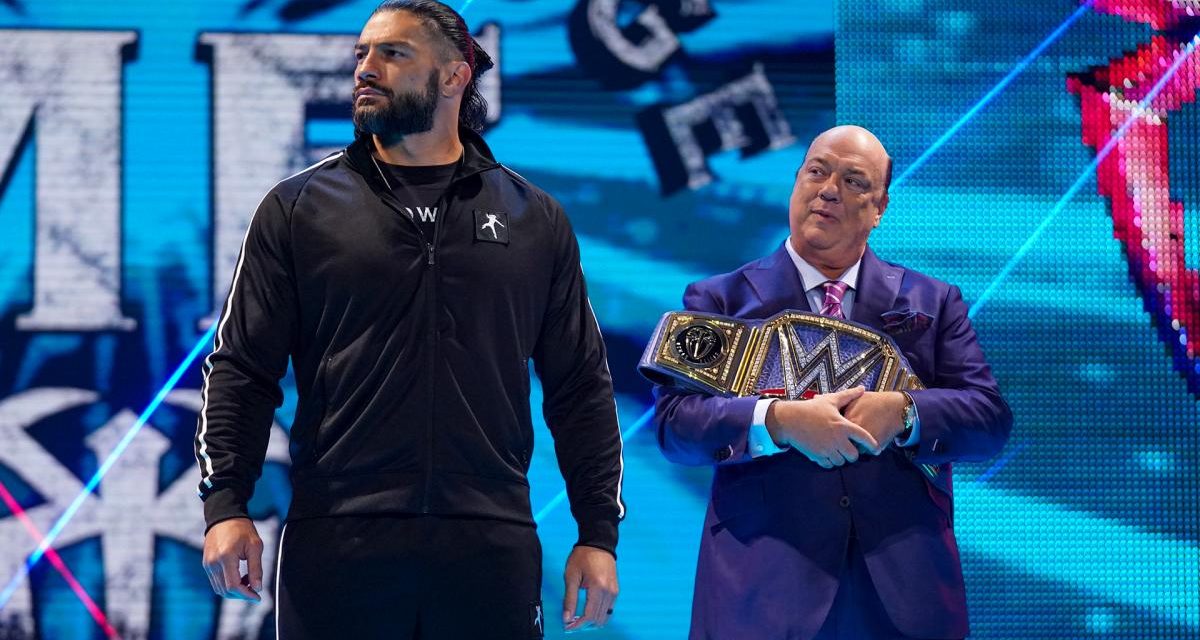 Featuring an appearance from the SmackDown Women’s Champion, this June 4th episode of SmackDown has 150% more title matches than your regular leading episode!

Our beloved Universal Champion, Roman Reigns, makes his entrance to kick off the show. Notably, Jey Uso isn’t accompanying him. He’s greeted by roman_sucks.mp3, which Roman reacts to like it’s real crowd chants. Still stupid. The champ says that he’s changed his position on the Usos having a match for the SmackDown Tag Team Championships tonight, and he’s now in support of it. However, he reminds Jimmy that he said they’d win the tag titles, so he’d better keep that promise.

Roman calls the Usos out to the ring, and they come out with Jimmy once more being much more enthusiastic than Jey. Jey says hello to Roman, and Roman tells Jimmy to acknowledge him next. Jimmy reminds him that he already did acknowledge him at Hell in a Cell when he choked him out, and then says that tonight’s not about that. Tonight is about winning the tag titles. Roman reminds him once again that he’d better win now that he’s said he’s going to, because their whole family is watching.

Jimmy starts off against Dominik, and Dominik hits Jimmy with a dropkick and an arm drag before tagging in Rey for a double hip toss and as assisted senton for 2. Jimmy tags in Jey, and the two hit a double elbow drop for 2. Jey strikes with a backbreaker for 2, but Rey comes back with a headscissors. Jimmy tags himself back in and hangs Rey up on the top rope for 2. He locks in a chinlock on Rey, and hits him with an enziguri when he escapes for another 2 count.

Jey hits Rey with a cheap shot before Jimmy tags him in. Roman’s right hand man follows Rey to the outside and slams him onto the barricade before bringing him back in and tagging in Jimmy, who stomps down on Rey. Jey tags himself in, but Rey knocks him off the apron, headscissors Jimmy to the outside, but when he goes for a baseball slide splash, Jey catches him and hits him with a Samoan Drop on the announce table as we go to commercial.

When we return to the action, Jey is stomping Rey down in the corner and hitting him with a running hip attack. He tags in Jimmy, and they utilize a backbreaker/flying elbow combo to get a 2 count. Jey tags himself back in and locks in a chinlock on Rey, but the champ fights out and trips Jey right into the turnbuckles. Jimmy tags himself in, grabs Rey, and tags Jey in, the two deliver an assisted headbutt. Jey goes for a splash on Rye, but he moves out of the way. Jimmy tags himself in, and Rey dodges both Usos and they crash into the corner. 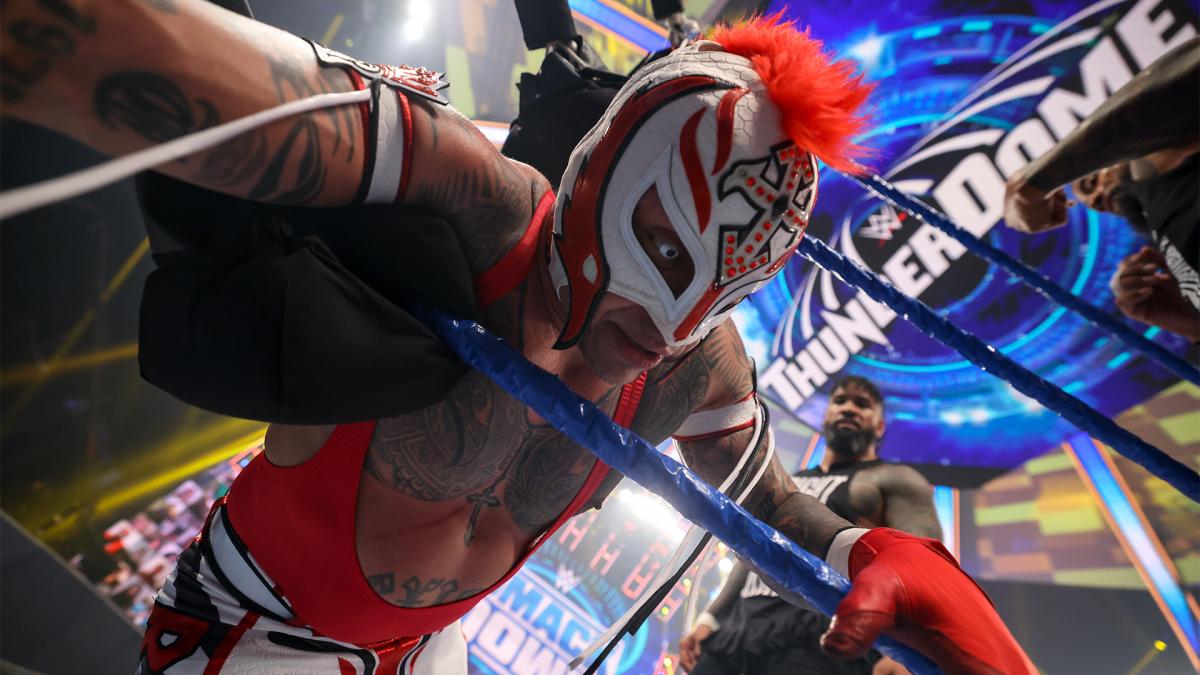 Rey Mysterio contemplates the universe and his place in it. Photo: WWE

Rey tags in Dominik, who dives onto both Usos on the outside, he brings Jimmy back in and catches him with a crossbody for 2. Dominik delivers a neckbreaker to Jey and a Tornado DDT to Jimmy for another 2. Dominik goes to the top rope, and Jimmy meets him there. Jey tags himself in, and the two deliver an assisted Samoan Drop for 2. They look for a double superkick, but Dominik dodges it and dumps them both to the outside, Rey catches Jey with a senton off the apron, but Jimmy superkicks Rey.

Jimmy goes back into the ring, and Dominik tries to get him with the 619, but Jimmy superkicks him as well. He goes for the Uso Splash, but Dominik gets his knees up and rolls Jimmy up to get the win, However, it looked quite like Jimmy kicked out of the pin, and the commentators talk about it as well, so it’s definitely part of a story. Backstage, Jimmy tries to tell Roman that he got cheated out of a win, but Roman doesn’t want to hear it. He says he better go to Adam Pearce and get another shot so he can fix this.

Kayla Braxton interviews Seth Rollins about what he did to Cesaro 2 weeks ago. Rollins says he doesn’t owe us an explanation. Kayla asks Seth what’s going to happen when Cesaro inevitably comes for him. Seth removes his mic slowly and gives no answer.

Backstage, Chad Gable approaches the Street Profits, saying that they’ve had a downwards trend in their matches lately. He offers to coach them back to their former glory, and they laugh him off and walk away.

The Usos approach Sonya Deville and Adam Pearce, saying they got cheated. Sonya says that they’ll review the footage and make a decision tonight.

Carmella starts off by taunting Liv and then running away when Liv chases her. They run around outside a bit, and when Carmella tries to catch Liv with a kick, Liv tosses her into the barricade. She slams the former champ into the apron. They go back into the ring, and Carmella catches Liv with a superkick. She shoves Liv into the corner and hits her with back elbows, before pinning her for 2. Liv reverses an Irish Whip attempt and sends Carmella into the corner, before delivering a modified backstabber and a stomp for a close 2. Liv looks for a clothesline, but Carmella grabs her hair and slams her onto the ground, before locking in the Code of Silence to force Liv to tap and get the win.

Adam Pearce and Sonya Deville approach the Mysterios, and tell them that they’ve reviewed the footage of their match earlier, and the Usos deserve another shot. And they’ll get it. Tonight.

SmackDown Women’s Champion Bianca Belair comes out to talk about Bayley. She says that Bayley has admittedly gotten on her nerves, but everyone else that’s gotten on her nerves before has been left in the dust. She challenges Bayley to a match at Hell in a Cell, and Bayley responds by simply laughing as usual, except over Zoom this time. She accepts the challenge, and says at Hell in a Cell, when she wins, she won’t be the only one laughing. She laughs hysterically once more, and all the screens of the ThunderDome show her laughing face as well. 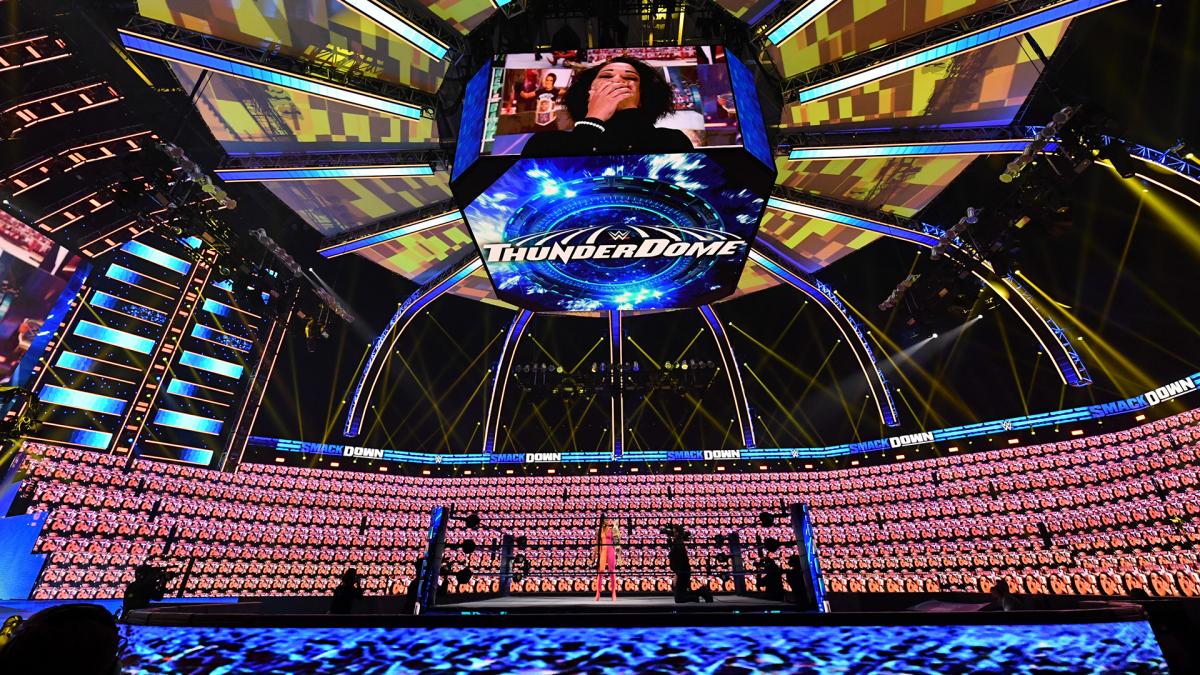 Pictured: An absolutely perfect usage of the ThunderDome. Photo: WWE

The Street Profits are approached backstage by Otis, who asks the Profits to apologise to Gable for insulting Chad and the Alpha Academy. Ford tells Otis that he should re-evaluate his place in the Academy, since he’s accomplished nothing since joining it. Otis responds by attacking the Profits, and leaving them groaning in pain.

Shinsuke Nakamura makes his entrance, once again accompanied by the sick riffs of Rick Boogs. Corbin goes right after Nakamura to start the match, raining punches down on him in the corner. Nakamura fights back with a kick and a knee to the gut for 2, but Corbin fights right back with a spinebuster for 2. 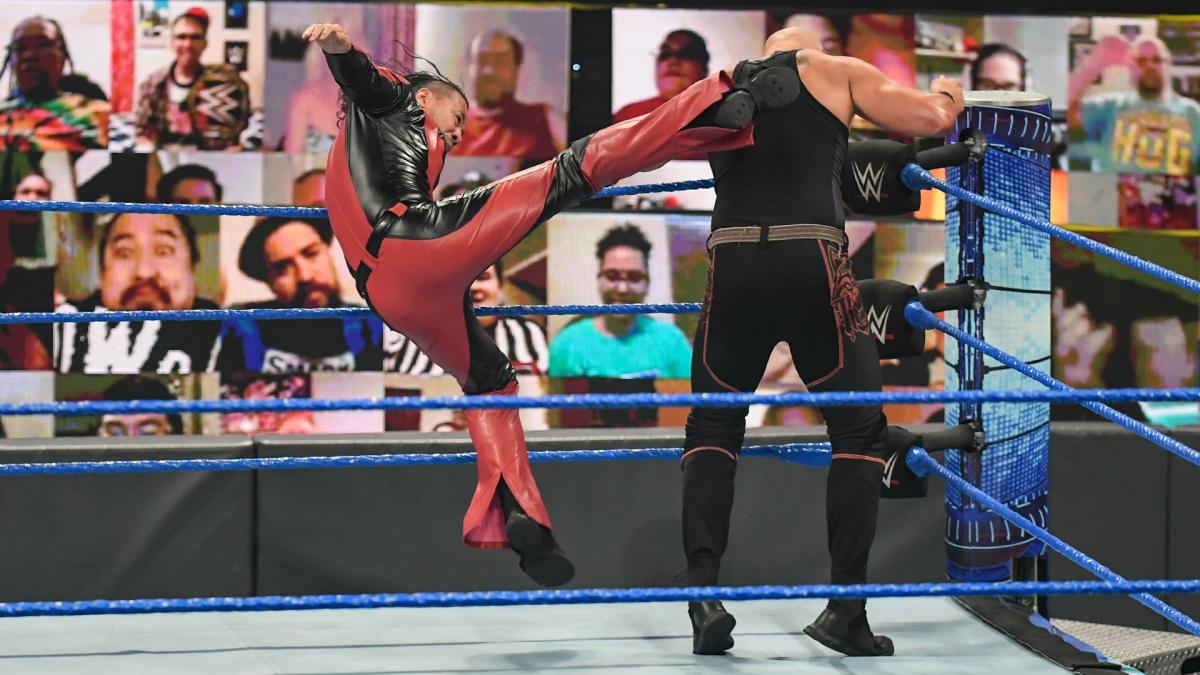 Shinsuke Nakamura with a kick to King Corbin. Photo: WWE

The King of Strong Style locks in an armbar, but Corbin gets to the ropes. Corbin goes for his ring around the ringpost clothesline, but he hits Rick Boogs with it instead of Nakamura. He goes back into the ring and rolls Nakamura up to get the win. Corbin goes over to the timekeeper’s area to grab his crown, but when he tries to leave, Boogs grabs his leg, allowing Nakamura to kick the King and take the crown once more.

Backstage, Kevin Owens is making his way to his match with Apollo Crews, where Commander Azeez is banned from ringside. However, Azeez simply attacks him backstage, hitting him in the stomach with an equipment crate. Owens still makes his way to the match, but he’s clearly severely injured.

Crews goes right for the midsection of the Prize Fighter, striking with a punch and a gutbuster. The champ delivers a snap suplex for 1, before running his knee into the gut of Owens and whipping him hard into the turnbuckle. K.O. fights back with a clothesline and a senton, and he looks for a Pop-Up Powerbomb, but his ribs give out on him. Owens sends Crews to the outside and goes out after him, but Crews pulls his legs out from under him, sending him crashing onto the apron. Crews delivers a brutal Olympic Slam to Owens on the floor before we go to commercial. 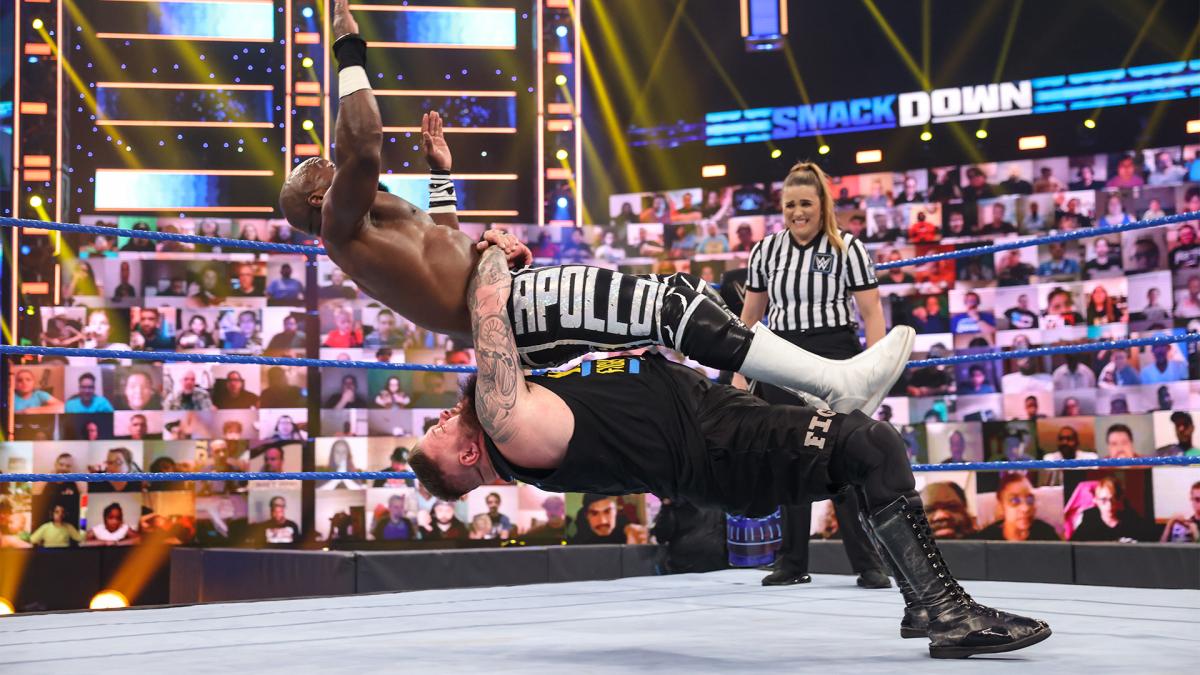 The champ puts Owens up on the top rope and looks for a superplex, but K.O. shoves him away and goes for a Swanton Bomb. Unfortunately for him, Crews gets his knees up, and continues the assault with an enziguri, a German suplex, and a standing moonsault, but it’s not enough to get a 3 count. Crews goes for a Frog Splash, but Owens moves and hits the champ with a pair of superkicks and a Pop-Up Powerbomb for a very close 2.

Owens goes to the top rope, but Crews moves to the apron, grabs Owens off the top rope, and hits him with a Death Valley Driver on the apron. He rolls K.O. back into the ring and pins him to get the win.

After the match, Sami Zayn comes in and demolishes Owens with a Helluva Kick. He says that this is just karma for what Owens has done to him.

Dominik starts off against Jimmy, with the latter gaining momentum with a brutal back elbow. He tags in Jey, who delivers a flying forearm, followed by a scoop slam for 2. Jey hits the younger Mysterio with a neckbreaker, and when Dominik goes to the outside, he crashes into him with a suicide dive as we go to commercial. When we return to the match, Jey is tossing lefts and rights down on Dominik. He locks in a chinlock, and beats down Dominik when he fights out of it.

Dominik headscissors Jey into the middle turnbuckle, and both competitors tag in their partners. Rey comes in fast with a flying forearm for 2, but Jey tags himself in and goes for a powerbomb. Rey reverses it into a hurricanrana, but not before Jimmy can come in and attempt to roll him up. Rey escapes the pin and hits Jimmy with a kick, before hitting him with a wrecking ball dropkick after Jimmy goes to the outside. He slides under the bottom rope with a splash, and Rey sends Jey into the ringpost.

Rey sets up and hits the 619 on Jimmy and tags in Dominik, who looks for a Frog Splash. Unfortunately for him, Roman Reigns chooses this moment to come in and hit Dominik with a Superman Punch, ending the match by disqualification.

Winner via disqualification: The Usos

After the match, Roman also hits Rey with a Spear, and then slams both Mysterios with the steel steps. Roman turns his wrath on only Dominik next, hitting him with punch after punch after punch while the Usos look on. Dominik tries to rally, but Roman puts him to sleep with a Guillotine Choke. Jimmy tells Roman “not like this” and turns to leave. He stops when he realizes that Jey isn’t coming with him. Jey simply stares at Jimmy while Roman continues to attack Dominik. 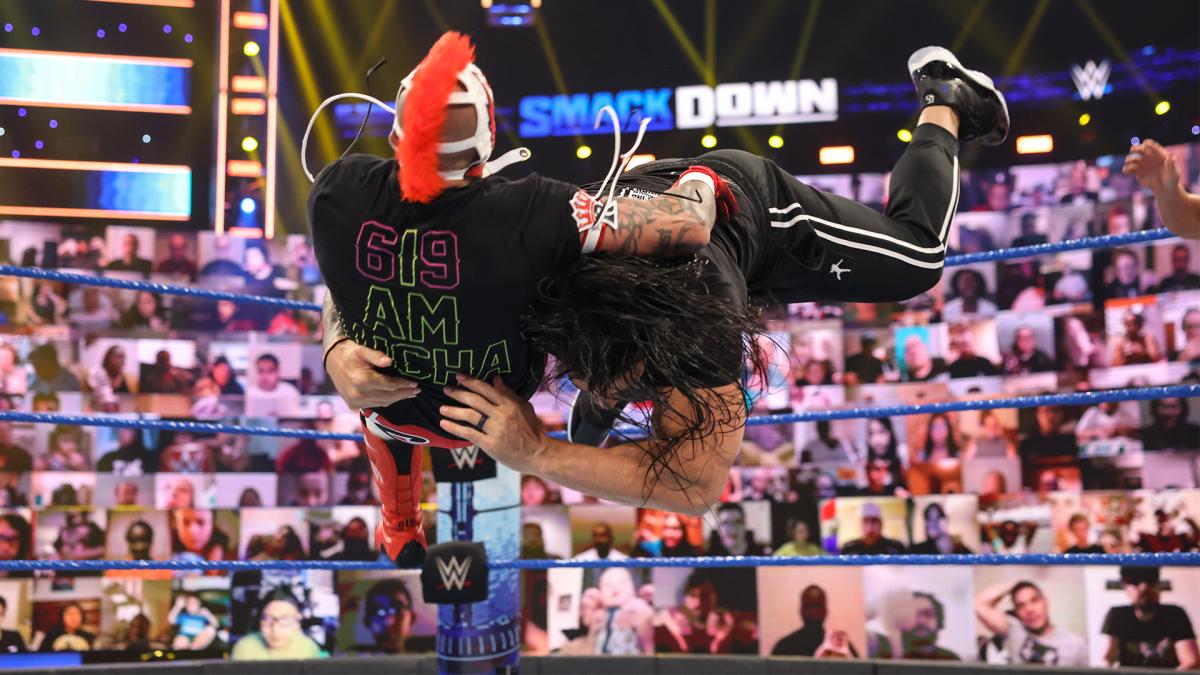 This show was alright, I’m still enjoying the Roman Reigns storyline, surprisingly. I expected my enjoyment of Reigns-related content last week to be a fluke, but the enjoyment still held. The double tag title match felt a little weird though, it felt both redundant and original at the same time