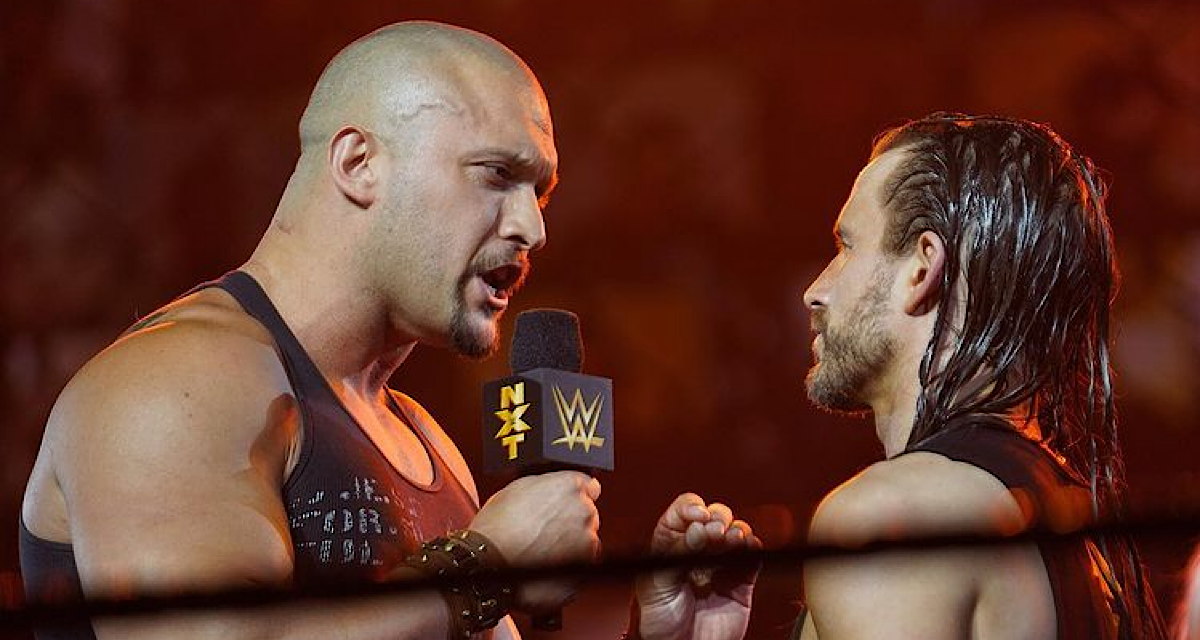 Remember NXT TakeOver: In Your House? The June 13th event is quietly approaching amidst an exciting rebuild of wrestling audiences and touring, but, the Capitol Wrestling Center will remain home for now. Tonight’s episode, surprisingly the penultimate before TakeOver, featured a triple-threat match to determine a new number-one contender for Karrion Kross’ NXT Championship. But as the headline suggests, that plan was shaken up by a returning Adam Cole (bay bay)!

The winner of tonight’s opener will headline against the NXT Champion Karrion Kross at NXT TakeOver: In Your House. O’Reilly, the sole face, is reasonably the favorite here and fends off double-assaults from the opposition. It’s quick and smooth action from the get-go as the competitors are three of NXT’s best technical wrestlers; before picture-in-picture, Dunne showcases his signature joint manipulation and Garagno utilizes his quickness. O’Reilly’s claim to fame are his strikes and submissions, and together with the others’ skills, the match features nonstop exchanges of great maneuvers and reversals.

After a string of finishers though, O’Reilly staggers ringside when a returning Adam Cole blindsides his rival. He takes out Dunne and Gargano too before an irate William Regal and security intervenes. The broadcast fades out, and coming back from break, the ring and its surrounding area is… empty? 30 minutes in, the match is supposedly a no-contest, which is somewhat deflating but moreso odd.

Meanwhile, Ember Moon storms the ring, calling out the NXT Women’s Champion Raquel Gonzalez. Moon takes out Gonzalez but Dakota Kai attacks from behind. Regal and security are again put to work.

Amid his entrance, Knight cuts a promo and references his encounter with Ted DiBiase and Cameron Grimes last week. Needless to say, Knight on the mic shines bright. Atlas, a vocal champion of Pride Month, gains opening control against Knight with high-flying style. As the latter eventually recuperates, DiBiase himself appears ringside to watch on preceding commercial. The ringside audience offers a timely distraction of “to the moon” chants, allowing Atlas to capitalize with a comeback. Speaking of which, Cameron Grimes engages in conversation with DiBiase — who isn’t listening, but Knight evidently takes notice. Pushing Knight down, Atlas thereafter connects with the finishing cartwheel DDT to gain the pinfall victory. Who did Knight piss off?

Some slight follow-up is offered regarding tonight’s triple-threat no-contest. “All you need to know,” says Oney Lorcan, is that Pete Dunne should’ve been victorious. Austin Theory objects for his partner Johnny Gargano, and a pull-apart brawl commences backstage.

DiBiase puts it bluntly: “LA Knight really dropped the ball tonight.” Before he can finish though, Adam Cole marches right past, and the broadcast abruptly fades away. The commercial placements tonight have been chaotic; well, that’s one description of it.

Adam Cole is finally in-ring to explain himself. He directs his attention towards NXT Champion Karrion Kross, and — speak of the devil — he appears. The champion tries his hardest, but Cole verbally destroys him with this: “This brand has done everything in their power to make you feel special. You got the cool music, the lights, the fog machine, the girl. You know what they do to make Adam Cole feel special? They ring the freaking bell.” As William Regal appears, Kross demands a multi-man matchup with all aforementioned contenders involved for NXT TakeOver: In Your House.

Candice LeRae catches Indi Hartwell listening to “80s power ballads”. Moving on, a new Cruiserweight contender is introduced with a package preceding the upcoming bout. Plus, in a backstage vignette, Xia Li calls out Mercedes Martinez for a matchup at TakeOver.

Camelo Hayes, the former Christian Casanova, makes his NXT television debut as Kushida’s open challenge opponent. The newcomer impresses with athleticism and notably connects with a floating leg drop before commercial. He surprisingly takes majority control against the champion and reverses all possible offensive strings until Kushida catches a big right. Targeting the arm, Kushida finally cinches the Hoverboard Lock for the quick submission tap. The competitors exchange their respects after a standout performance from Hayes; he looked like a pro!

Before the main event, the NXT Tag Team Champions MSK are hyped up. Will they ultimately fall to Legado del Fantasma though?

“Yaas!” Franky Monet reads off rave reviews of her NXT debut, and the two makeup artists surrounding her cheer on.

Zoey Stark and Zayda Ramier vs The Way

“I beat you at the Mae Young Classic. But at TakeOver, I run through you,” says Mercedes Martinez in response to Xia Li and Tian Sha. Plus, Diamond Mine is “opening soon”.

Although the champions are incredibly bland character-wise, they can undoubtedly go in-ring. The opposition in Joaquin Wilde and Raul Mendoza are equally sound though, gaining the opening advantage over Nash Carter. The action breaks loose, and Wes Lee connects with a backflip kick before Grizzled Young Veterans appear ringside. But thankfully, Tommaso Ciampa and Timothy Thatcher make the save as Lee and Carter deliver simultaneous dives preceding picture-in-picture. Lee, “taking an abundant amount of punishment”, sells perfectly for LDF’s intense offense as Mendoza notably hits a great springboard dropkick. They subdue Carter’s comeback and deliver a hurricanrana-powerbomb combo on Lee for two. But as Santos Escobar discreetly interferes ringside, big Bronson Reed smashes him into the barricade. MSK recuperates and hits the finishing hangover to retain.

The highlights of tonight’s episode surrounded a returning Adam Cole, who stirred up trouble in the triple-threat. Apparently, he — and the four other competitors — will already be the highlight of TakeOver, because the undercard isn’t looking too hot. As for tonight, I wasn’t crazy about the main event (or MSK, really). But like the majority of the episode, it was definitely solid.