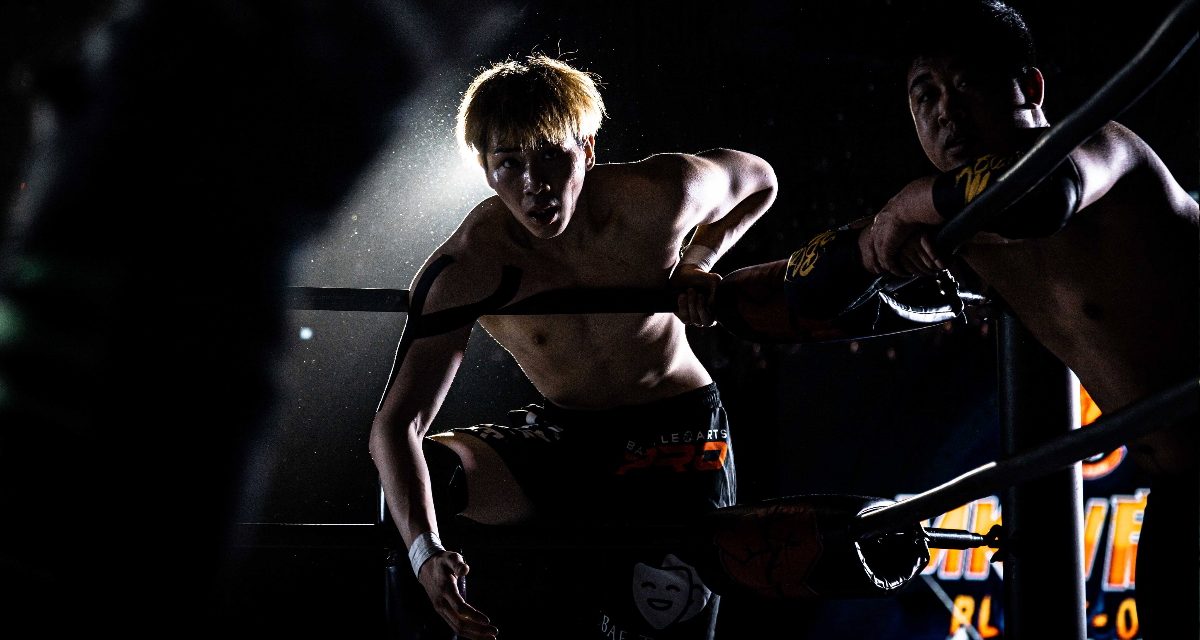 Cold open promo from Juunyan Lee who closed last weeks episode by jumping Ash as he was being presented the Belt and Road Championship Belt. He says it’s been more than one year since he’s been in MKW, but he’s back and better than ever and glad that his fans still have his back after all this time.

After the intro Xiao Jie Men recaps last week and gives us this week’s lineup.

Zombie Dragon zombified Johnny two weeks ago and now has full control of him. He directs all of the big man’s actions. 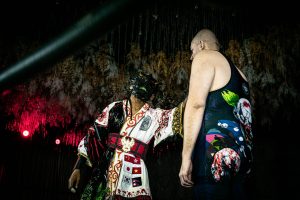 Johnny looks like he is sleepwalking due to the trance and Aegon takes his time walking around and examining him before attacking.

Aegon’s various strikes don’t even register on Johnny. He jumps on Johnny’s back with a sleeper and that’s when Dragon has him snap into action. Johnny yells and backs Aegon into the corner. After shoulders in the corner and a running avalanche splash, Johnny pins Aegon for the quick win.

The Whips jump start their opponents but the tables are turned and Buffa beats on Holmes in the ring while Chen brawls with Connor on the outside.

But as the illegal men on the outside go to their corners, Connor interferes from the outside giving Holmes the advantage. He lures Chen in who gets stopped by the ref while Connor clobbers Buffa on the outside.

With Buffa thoroughly beaten up the Whips tag in and out at their leisure while making the most of the ref’s count, double teaming when possible. 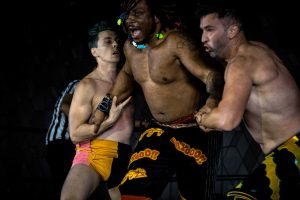 The Irish Whips whips Buffa to the ropes (Photo by MKW)

The whips send Buffa to the ropes, but he hangs on. Chen walks over to nearly the halfway mark of the apron and tags in. The ref surprisingly allows it and Chen jumps in and attacks both his opponents with high flying moves.

The Whips regain control when Holmes catches Chen’s monkey flip and Connor hits a line on him from the outside.

The Whips hit some big moves on the much smaller Chen while tagging in and out liberally. Chen is barely able to stand.

Chen finally escapes from the corner as the Whips prepare a double team attack when he kicks Connor from behind, followed by some unique moves that hit both opponents at once.

Chen tags Buffa and he lays both men out successively and repeatedly.

After a very original backdrop on Holmes while full nelson slamming Connor he heads to the top rope but his leap is countered into a powerbomb by Connor for a close nearfall. Mad Dog lives up to his name and begins to bite Buffa.

The Whips double team Buffa repeatedly but can’t put him down. While methodically setting up a 3D Chen spears Holmes, allowing Buffa to counter into a sunset flip on Connor for the win.

Another jump start in this one by The Stable. Lee and Ash, the spryest of their teams are left in the ring as the legal men while the others fight outside.

After a separation Crusher and Money are in. Crusher is able to gain the advantage and tags in Mamba for a double team. Lee too then gets a crack at Money.

Money’s strength comes into play as he reverses a whip and with help from the outside gets the advantage for The Stable.

The Stable’s team experience advantage shines here as everyone including Lady Marie get in on the action with the ref distracted as needed. 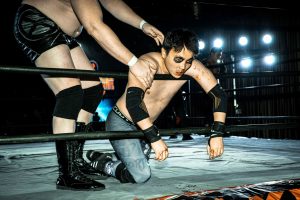 The chaos leaves Crusher with a bloody nose as the team now takes their time on him more methodically.

“When in doubt. Move.” The classic go-to works out for Crusher as Money charges him in a corner allowing him to tag Mamba. He attacks all opponents both legal and illegal. But when he charges Sam with a shoulder, the big man’s weight sends Mamba down instead.

As Sam prepares for a snake eyes Crusher pops in with a superkick allowing Mamba to reverse DDT Sam from the position on the shoulders for two.

Lee gets tagged and comes in hot but a shoulder block stops him too.

As everyone else brawls on the outside Lee hits the super kick on Ash who tagged himself in and the ref counts it for the win.

The best episode yet. Asterisk.

I enjoyed this episode of MKW more than any other thus far in season 2.

All the matches told stories and were the most solid.

But there were some glaring moments where the the referees made strange calls and important moments in the two tag matches were nearly identical.