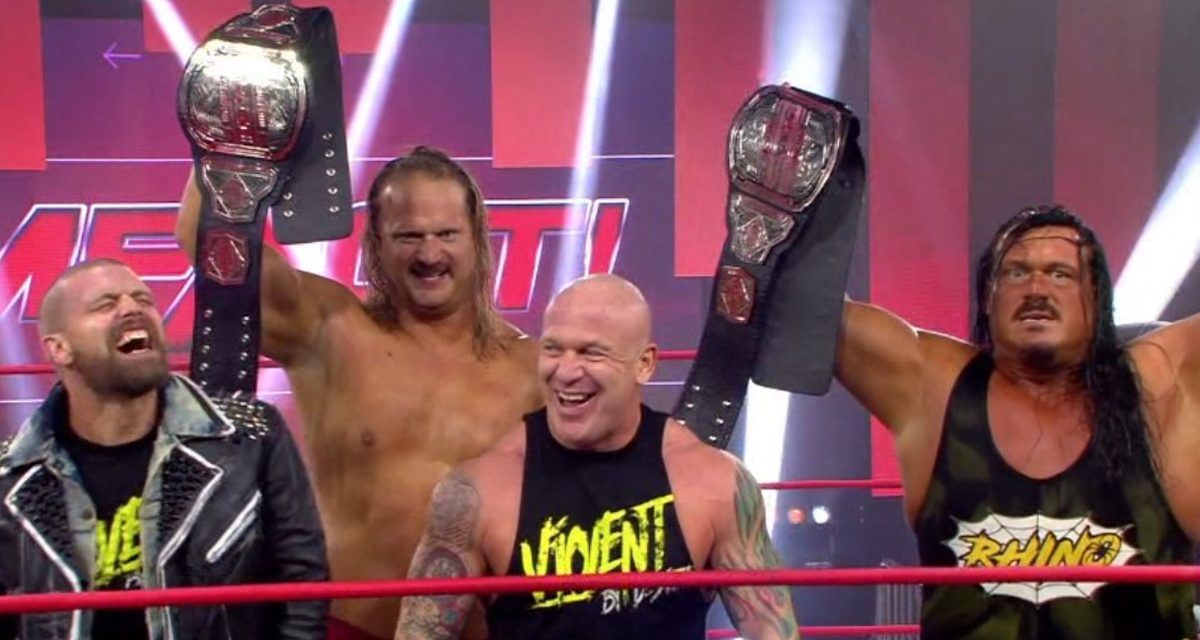 Our regular roving Impact reporter “Bloodthirsty” Bob Kapur is off tonight. I hear his absence involves two bottles of whiskey and a cage fight in a back alley dive in Indonesia but nonetheless I have some big shoes to fill when it comes to Impact Wrestling. Please bear with me as I am bound to make a few missteps.

Our show opens with a simple but thoughtful, emotional tribute to the unforgettable, ultimate bad ass Jerome ‘New Jack’ Young.

The show ends with FinJuice putting up the Impact World Tag Team Championships against the team of Ace Austin and Diesel-With-Dreads. NJPW? Now you are talking my language. Before the night ends though, things will take an unexpected turn.

As the bell rings, Austin fakes locking up with Finlay but tags in Diesel-With-Dreads instead. Finlay is not able to make much progress with Dreads so he tags in Juice Robinson.

“The more comfortable he is in the ring, the more his personality comes out,” blathers one of the announcers not realizing that Juice Robinson’s nickname in NJPW is “The Flamboyant One”.

FinJuice evens the odds by double teaming Diesel-With-Dreads double bulldogging his face right into the mat. They turn their attention to Ace Austin putting him out of the ring as well.

The illegal man, Diesel-With-Dreads slams the oxygen out of Finlay and tries to make the cover then realizes that’s a mistake.

“The tag team titles are almost in their clutch,” babbles an announcer. No, there is no typo or spelling mistake in that quote.

“Being the Impact Tag Team Champions really means something,” says an announcer. Well, I hope so otherwise there is no freaking point to this match.

Finlay spikes Diesel-With-Dreads with a stunner. Dreads falls into a corner right where Austin is perched on the top rope. Finlay brings Austin back down to Earth with a Superplex. A cannonball from Robinson puts out Dreads’ lights. Left Hand of God from Robinson, a stunner from Finlay and Pulp Friction from Robinson pins Dreads.

A word of advice announcer dudes. If you are going to call matches featuring talent from other promotions perhaps it might be a good thing to get to know them and their moves.

FinJuice doesn’t have time to celebrate as Violent By Design’s music hits with Eric Young leading his wrecking crew to the ring. So that’s where Sanity’s leader ended up, eh?

Young produces what looks like a high school sports trophy which apparently give Violent By Design the right to immediately face FinJuice for the straps. It looks very shady to me but who am I to argue with wrestling logic? Young picks Rhino and Joe Doering to challenge FinJuice.

As you might expect, the exhausted FinJuice are mowed down in a matter of seconds and your new champions are Violent By Design.

“What is in store for us now? When your backs are against the wall and you are truly against all odds, you have no choice but to be Violent By Design,” says one of the announcers as we fade to black.

If you say so, buddy. 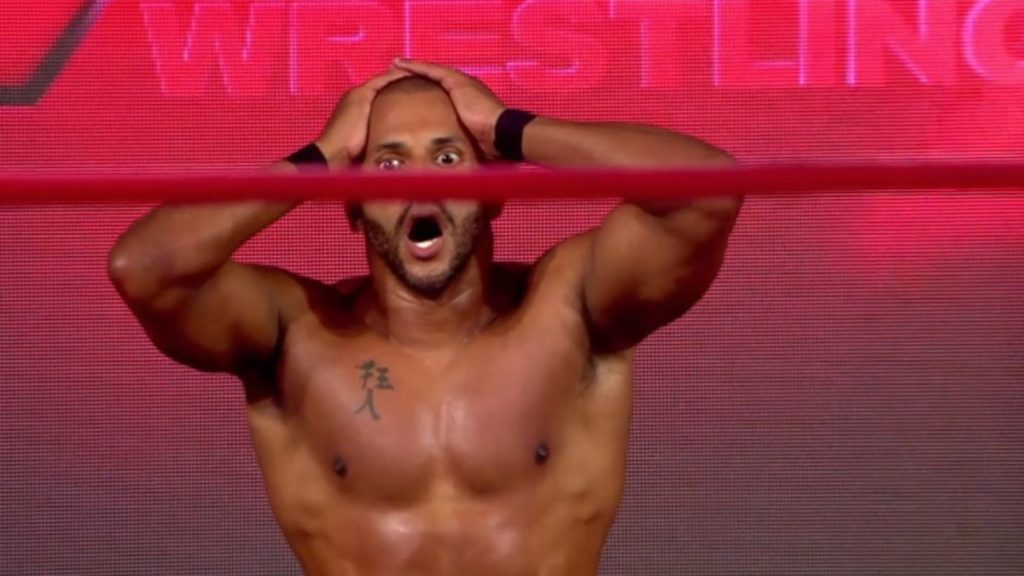 Raju is stunned by the table botch too. Courtesy: Impact Wrestling.

“This is a grown man lifting another grown man up,” prattles one of the announcers.

Big Guy 2.0 steals a page out of Bobby Heenan’s book when he screwed the Ultimate Warrior by tripping up Next-To-Nothing and holding his leg down so that he cannot kick out of Raju’s pin.

Raju stands by on the entrance way twiddling his thumbs as Next-To-Nothing bounces Big Guy 2.0 off the ringside barriers, beats him with a steel chair and sets up a table in one of the corners of the ring.

Next-To-Nothing gives Big Guy 2.0 a running tackle. Big Guy completely misses the table though and Next-To-Nothing puts a dent in it with his ass. Not the way the spot was supposed to happen one would guess but hilarious especially in slo-mo.

No Hulk-A-Maniacs? I am disappointed. Johnny Bravo Reject tries to repeatedly trip up Hogan. He takes some snaps of Emma besting Hogan.

“That will end up on the cover of her Instagram page,” says one of the announcers showing their age.

Emma rolls up Hogan for the win.

“She is wrecking havoc right now,” mumbles an announcer. No, there is no typo or spelling mistake in that quote.

Rosemary, Crazzy Steve and a full-grown Mantaur show up. Purrazzo and her pals flee the scene of the crime as Rosemary and Havok share friendly nods.

What distracts me throughout the entire match is that Is that VSK’s gear looks exactly like Curt Hawkins’ in WWE. I hope Is that VSK got a discount for that attire. Is-That-VSK doesn’t seem ready for prime time. Williams puts him away with a snap powerbomb and a Canadian Destroyer. They cannot play the Canadian national anthem enough. 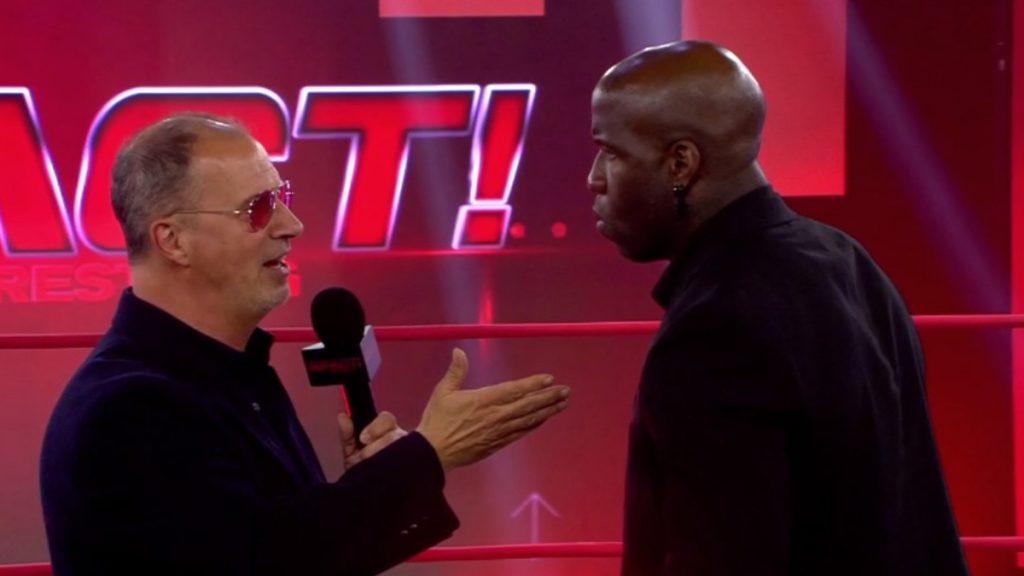 Cyrus points out to Ojinnaka how much he really sucks…or something like that. Courtesy: Impact.

Quinn Ojinnaka gives some speech in the ring about Kenny Omega declaring himself a “wrestling god”. Ojinnaka argues that none of the most powerful gods could knock Zeus off Mount Olympus with the idea that he is Zeus and Omega is those other gods? Cyrus the Virus and Kenny Omega come out to debate Ojinnaka. Cyrus points out that Ojinnaka is gifted but has a very short resume. He never won a Super Bowl, for example.

“You couldn’t even win a title in Ring of Honor,” laughs Cyrus. Buuuuurn.

Ojinnaka threatens to rip off Cyrus’ head and shove it up Omega’s ass. Man, would I love to see that.

Omega boasts that he will defeat Ojinnaka with the One-Winged Angel. When Ojinnaka demands Omega go for it right now, out comes Festus. Not to be outdone, Sami Hardcore literally teleports to the ring with a baseball bat. Anderson, Festus, Omega and Cyrus slowly back away so they can live to fight another day.

Great segment. Best of the night until Hardcore acted like the X-Men’s Nightcrawler.

The battle of the women with no necks and concrete in their veins. The friends shake hands and nod in appreciation often. Grace reacts to Ellering’s win by sulking on the mat. These two really sulk a lot.

There were promos. There was wrestling. Not all of it was good but not all of it was bad either. Always remember and never forget though…”When your backs are against the wall and you are truly against all odds, you have no choice but to be Violent By Design.” Come back, Bob. Please? Please?