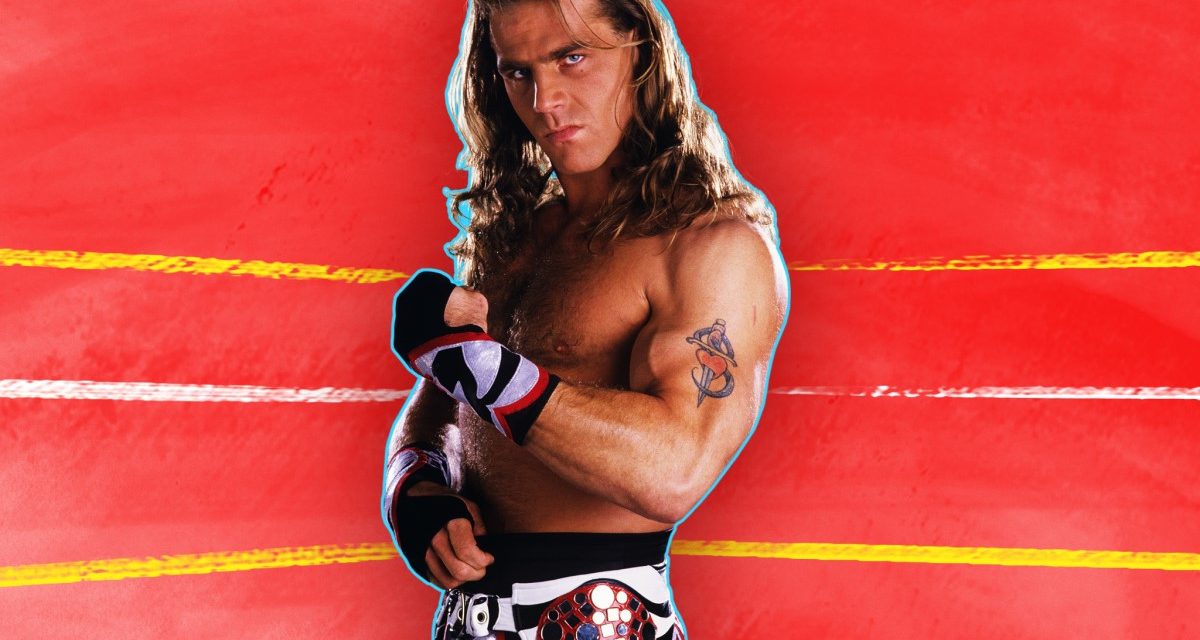 Tonight’s episode of Biography, featuring Shawn Michaels (and strangely booked up against WWE’s own WresleMania Backlash), provides a quick look at the main points of his long career, meaning that nothing is delved into too deeply. It’s a fine, dutifully told story, but you won’t get much new out of it if you’re already a fan. On the other hand, if you are new to Shawn Michaels, then consider it as an HBK History 101 course.

Michaels himself gets the most airtime to discuss his career, with clear-cut supporting roles given to Triple H and Marty Jannetty, but among the first to speak through archival footage are his parents, Carole and Dick Hickenbottom. Along with his childhood friend Kenny Kent, filmed in the present, they talk about Shawn’s youth as Michael Shawn Hickenbottom, loving contact sports and finding wrestling on TV — immediately deciding that it was his future.

His parents ushered him into college, but Michaels insisted that he knew what he wanted: to wrestle. He connected with Jose Lothario to start his training and the show quickly moves to teaming up with Marty Jannetty. With AWA Championship Wrestling filming matches for TV in Las Vegas in 1986, Michaels hits a jackpot on the slots and laughs about taking his first line of blow, all in the same night. A throwaway line by Curt Hennig about how Michaels and Jannetty didn’t start partying until midnight inspires the name of The Midnight Rockers.

The history is moving by so quickly, because admittedly there’s a lot to tell, so we go quickly to 1987 when they get the call to head to the WWF. Michaels breaks down the accepted version of the story, incorrect in his words, that an incident at a bar with the WWF wrestlers cost them their jobs. He insists that the legend, that they started a ruckus in a Buffalo bar, has been blown up over time, and that because of this, they were gone in one day. Bruce Prichard appears to suggest how unfortunate it was that hearsay cost them their jobs.

You can’t argue against the details of what happened in a bar in 1987 — was it a mild event or a big dust-up — but Michaels and Prichard both stress the point that The Rockers were done with the WWF after one day, and that‘s not true, although clearly more dramatic. Michaels details his reliance on cocaine in the time after being fired, and how he and Jannetty worked to get Vince McMahon’s attention again. Pat Patterson pushed on their behalf, and the duo got their second chance in the WWF.

Soon, we’re at Saturday Night’s Main Event, featuring The Hart Foundation versus The Rockers, where Michaels and Jannetty were booked to win the tag titles. One of the top ropes broke off during the match, and Bret Hart talks about how they knew the match was taped and they’d be able to fix the rope and edit the match together, but the teams were told to just finish the match.

They finished and won the belts, with both teams hamstrung by the broken rope and failing to put on a memorable match. It never made it to air, so the titles never went to The Rockers for anyone not in attendance that night. This story is nothing new, but it’s nice to see Hart and Michaels on the same side of an issue … for now. 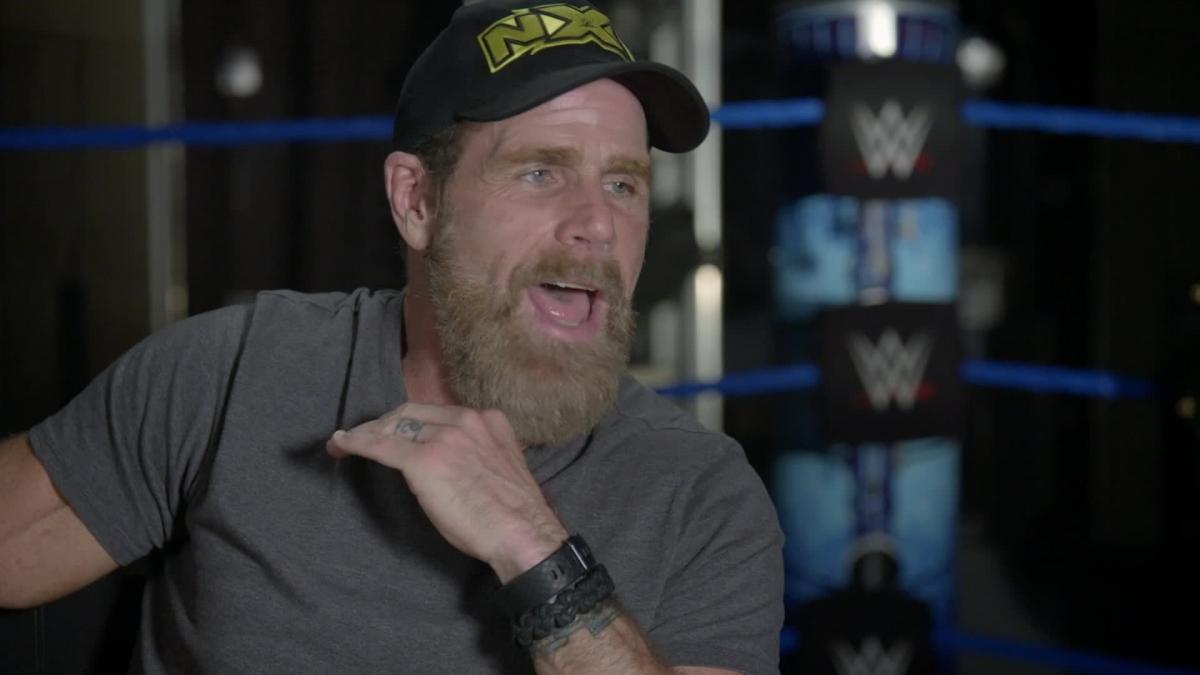 Michaels looks back upon his career in a still from Biography. Photo: WWE

Blurring the lines, as always, between real life and wrestling storytelling, Jannetty tells of a time that Roddy Piper spoke to them backstage and was pumping Shawn up for a singles run, while saying to Jannetty that he had work to do still. Jannetty recalls saying to Piper that this wasn’t the best time to talk about that, at which point Michaels shoves his partner and a fight breaks out. Michaels corroborates it, but it leads directly to WWF programming talking about trouble brewing between The Rockers.

It all comes to a head on the Barbershop and the superkick heard around the world. Michaels says he was both nervous and primed to set out on his own. For the second week in a row in the Biography series, Sherri Martel gets the short-shrift. With both Booker T and Michaels, she appears on screen but her part isn’t told.

Skip ahead again to Michaels’ Intercontinental Champion days, as he beats The British Bulldog for the title, is suspended for steroid usage but refuses to relinquish the belt, and essentially makes his name as Mr. WrestleMania in the ladder match against Razor Ramon at WrestleMania X. Quickly moving on now, Triple H sets up a joke: Shawn Michaels, British Bulldog, and The 1-2-3 Kid walk into a bar.

It’s no joke, of course; this is where Michaels throws some attitude at a group of marines and is beaten up out in the parking lot. Is it nine marines, as told by Michaels on a WWF programming clip? Was it six marines, as told by Triple H? I think I’ve heard the number seven more than any other number, but it’s not all that important. Hart talks about giving and taking a lot of stiff shots during the Iron Man match at WrestleMania XII, while Michaels says the feeling of winning wasn’t what he thought it would be.

Mani Mohtadi tells of going to a WWF house show on May 19, 1996, and filming the infamous clip of The Kliq’s curtain call. Heels and babyfaces had been caught being friendly before, of course, but this was shocking to see because it was in the ring and in front of the fans, and especially because it was caught by Mohtadi on camera and the footage was passed around. We get a fleeting glimpse at Michaels being told by Dr. James Andrews that he had torn his ACL and wouldn’t be able to wrestle again, and announcing his retirement, famously punctuating the speech by claiming he had lost his smile. Hart gives his opinion that he never believed the injury was real, and when Michaels returns and forms DX with Triple H, the tension between Hart and Michaels reaches its boiling point at Survivor Series in 1997.

The events, which are going to be covered in detail in Bret Hart’s episode of Biography coming up on June 6th, are told in brief as The Montreal Screwjob unfolds.  Even though the story is so well-known by this point, it is told here in such vague details that it’s hard to imagine someone who doesn’t know the story having any idea what’s going on. Now we’re at the Royal Rumble in 1997 where Michaels hurt his back after landing on the casket outside of the ring. Going into WrestleMania XIV, he was hurt and mad at his impending retirement due to the injury. Mike Tyson makes an appearance, but pretty well keeps to kayfabe.

Michaels leads us through his time at home out of wrestling. He opens up the Shawn Michaels Wrestling Academy and notes that there were “a couple of guys” that went on to have success — it shows, but doesn’t name, Bryan Danielson, Lance Cade, and Brian Kendrick. Instead, Michaels recounts seeing Nitro Girl Whisper on WCW Nitro, who would became Rebecca Hickenbottom, marrying Michaels not long afterwards.

Rebecca discusses facing the reality of Michaels’ fight against his addictions, and Michaels himself coming to grips with the growing realization that his son Cameron, at two years old, was starting to recognize the times when “Daddy’s tired.” He up and quits drugs and drinking and, after a gift of a Bible from Rebecca, joins a Bible study group.

Rebecca identifies the overnight healing of Michaels’ back as a miracle, and so we’re back in the ring for his SummerSlam 2002 match against Triple H. We don’t hear any juicy gossip on the awkward haircut he had for winning the World Heavyweight Championship in the Elimination Chamber, so we move ahead through the Ric Flair retirement match, skip Michaels’ Hall of Fame induction altogether and, not surprisingly, Saudi Arabia and the DX versus Brothers of Destruction match is not mentioned.

We watch the truce between Hart and Michaels, and finally Michaels’ retirement match loss against The Undertaker. The coda is seeing Michaels backstage at NXT with the young crew, especially Adam Cole, paying tribute to him.

It feels like a very quick two hours, because everything is told at breakneck speed. I wouldn’t say that you’re going to come out of this with any clearer idea of who Shawn Michaels is than what any previous documentary of his life story has provided. The best audience for this is simply someone who wants to walk — or maybe run — down memory lane.