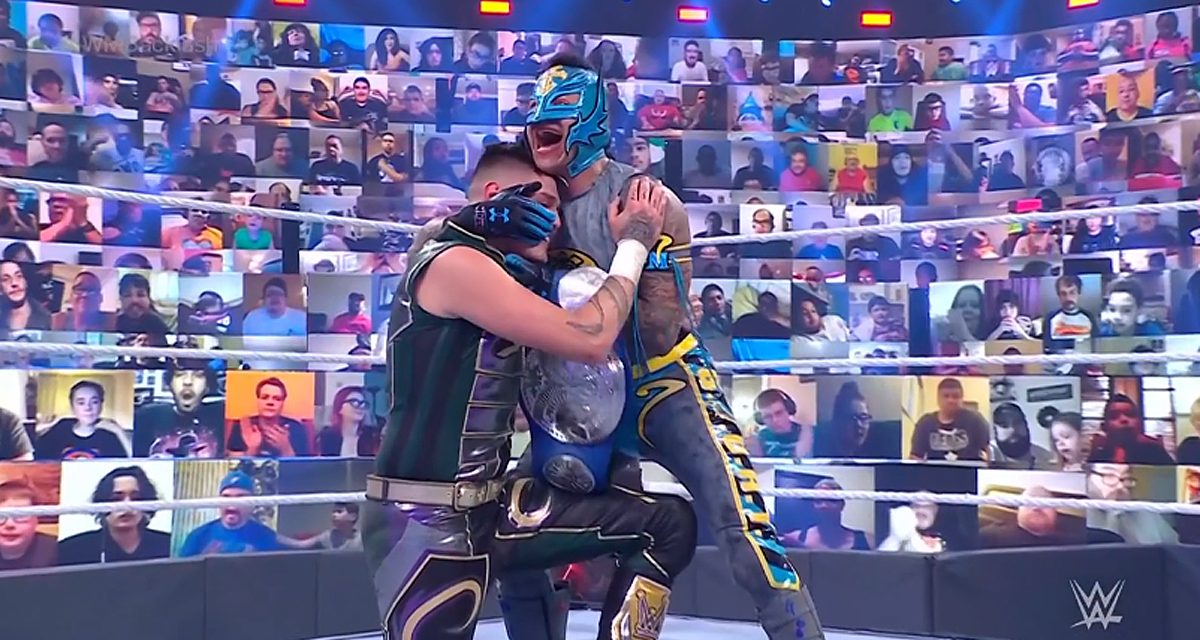 When WrestleMania came and went so did the WWE’s momentum. Since then, it has been mediocre and recycled feuds with the same old faces doing the same old things. There hasn’t been much to be excited about or to look forward to with SummerSlam on the horizon.

WrestleMania Backlash was actually better though than it had any right to be and that wasn’t because of the bookers or writers but the talent who made the best out of the crap they had been shoveled. As suspected and predicted by everyone though, the proximately of Backlash to WrestleMania assured that the champions would escape with their titles and that they all did except for The Dirty Dawgs.

The shocker of the night was that the match between them and Rey Mysterio and Dominik Mysterio for the WWE SmackDown Tag Team Championships was the best bout of Backlash when it came to not just the wrestling in the ring but more importantly the storytelling.

Things were brilliantly flipped when The Dawgs walloped a lone Dominik Mysterio backstage, laying a beating on him and then upturning a couch on him for good measure. A visit to the ThunderDome’s “medical facility” gave Rey some bad news. Dominik’s ribs were injured in the blindside and so he wouldn’t be able to compete leaving Rey to face the Dawgs all alone.

That set-up really heightened the drama that followed with Rey desperately attempting to defy the odds. Dressed like Batman, Rey battled on until he was hung up in the Tree of Woe and his knee was battered and bruised.

“You’ve got nobody!” shouted Roode as Ziggler laughed in Rey’s face slamming his knee on the concrete floor. Just as Rey took out the Dawgs with a double DDT and slammed them both into separate corners and steel posts, Dominik staggered to the ring holding his ribs in anguish.

Dominik would tag himself in giving a weary and bruised Rey a break. Dominik’s expected hot tag rally wouldn’t last longer however. A spinebuster from Roode would put an end to that.

“You should have stayed down! You don’t belong here!” Roode spat in Dominik’s face.

A relentless Rey would set-up Roode with a 619 in one of the corners as he moved quickly to remove Ziggler from the equation with a sunset flip on the concrete floor. A top rope frog splash from Dominik would make Rey and his son the first father and son WWE SmackDown Tag Team Champions.

“I am on top of the world right now!” said Rey after the match.

“What an honour and a blessing to be able to share this with my dad! We made history tonight! It is time to celebrate!” said Dominik.

Unlike the Dawgs, Roman Reigns, Bobby Lashley, Rhea Ripley and Bianca Belair all retained their championships in mostly decent matches. The WWE once again teased an angle between Seth Rollins and Roman Reigns. Instead of challenging Reigns at the end of the Universal Championship match though, Rollins went berserk on Cesaro further damaging his already injured arm by smashing it in a steel chair and then stomping his skull into the floor. 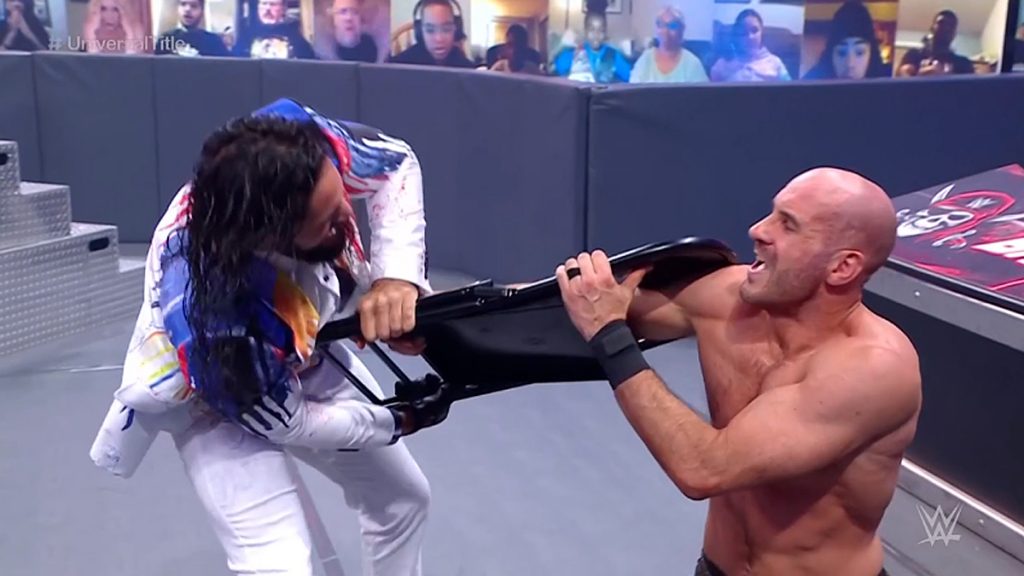 “What did you think was going to happen?” laughed Rollins as Cesaro lay severely injured.

On the other end of the spectrum, a ridiculous twist to the Damian Priest and Miz lumberjack match proved to be one of the most laughable and brainless angles we have witnessed this year. The WWE brain trust decided to tie their promotion of a certain horror movie on a certain streaming service – Hint: It isn’t Shudder – in with the match by making the lumberjacks a bunch of zombies whose make-up wasn’t fooling anybody when they got closer to the cameras. 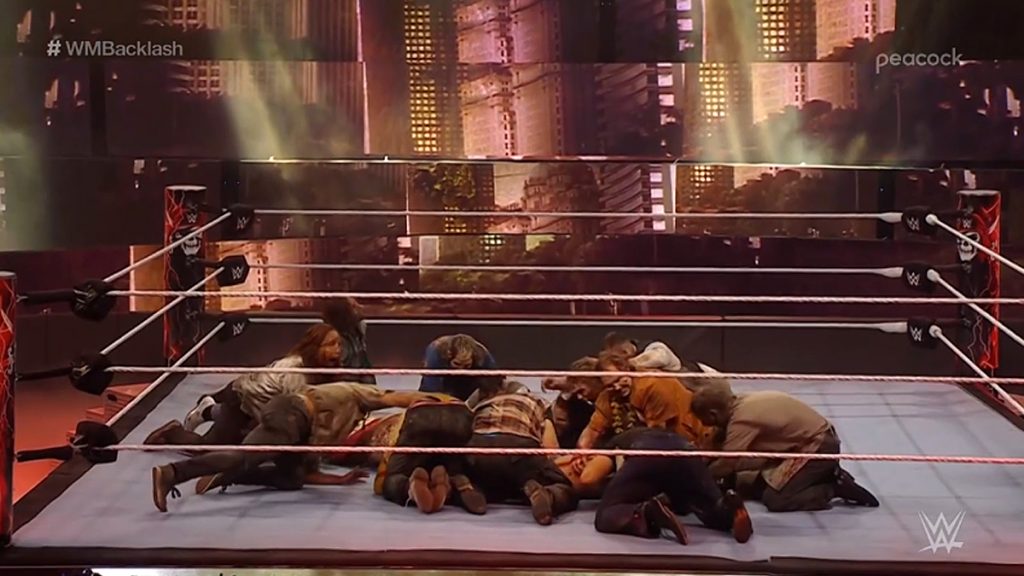 The zombies chow down on The Miz. So is he a member of the walking dead now? Courtesy: WWE.

Promising the Miz that he would speak to the WWE superstar lumberjacks before the match to get them on their side, Morrison discovered the locker room had become a bad B-Movie complete with fog and a horde of undead. The zombies would later surround the ring and try to pull out anyone who got too close to the ropes. During a lull in their battle, Miz and Priest found themselves on the floor fighting off the zombies together with just kicks and punches while the announce team made all manner of lame Night of the Living Dead, Dawn of the Dead and Walking Dead jokes and references. Morrison would be pulled over the barrier and dragged to oblivion while the Miz would be absurdly swarmed by zombies once he was pinned by Priest.

The entire farce was an exercise in absolute idiocy asking fans to completely and utterly suspend their disbelief. I mean, if you are going to take fans on a walk into the unbelievable and fantastic, the WWE could have at least pulled in and brought in The Fiend to usher in such a bad, bad joke on all of us.

Sheamus comes down to the ring on the pre-show offering another challenge but not for his title tonight. Ricochet answers the call in his hoodie and jeans. Ricochet is mowed over except for the final part of the match. He ducks a Brogue Kick. A running knee strike pins him though. Ricochet makes a mockery of Sheamus after the match by stealing his signature hat and jacket.

Winner: Sheamus at 7 minutes and 18 seconds. 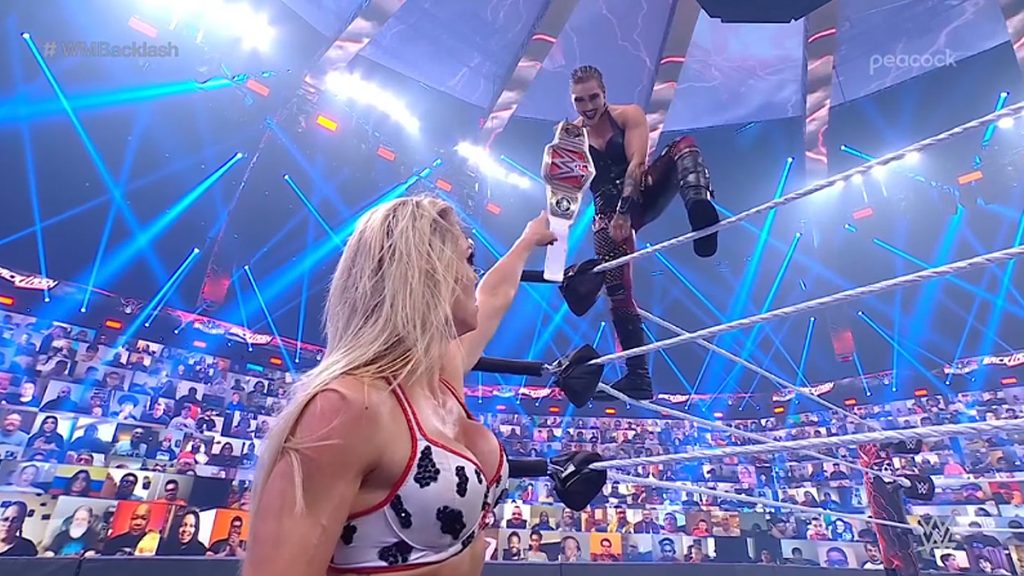 I have no idea why the official is helping the overrated, flat-footed Charlotte off with her robe. Rhea leaves her cartilage hoop ear rings in yet nobody uses them against her. Flair mugs for the camera far too much. It is not Shawn Michaels’ level of overacting but it is close. A double Natural Selection has Charlotte trying to pin both Asuka and Ripley at the same time. They kick out. The ending of the oftentimes awkward and sloppy match has Charlotte giving Asuka a big boot from the apron. Charlotte apparently just falls off said apron allowing Ripley to pin Asuka with Rip Tide. Yeah, it made no sense to me either. Ripley taunts Charlotte with the belt. 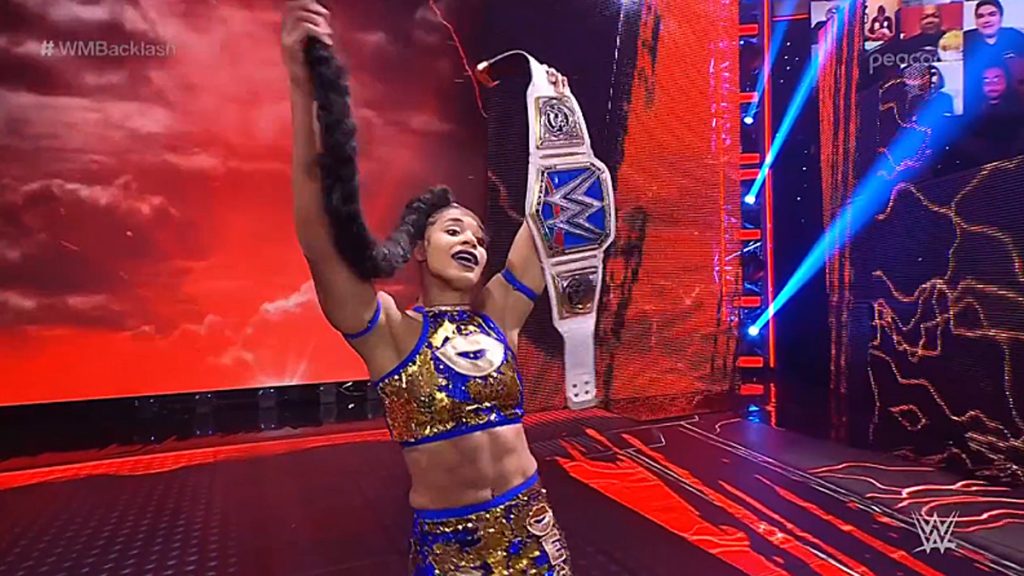 Bianca still has her hair and her belt. Courtesy: WWE.

Bayley is thrown off her game from the very start. She bails to the floor to collect her wits and press the reset button. She regains some momentum by pulling Bellair by her ear ring. Bayley laughs in Belair’s facing calling her a rookie. Belair snaps. Belair sidesteps Bayley who just splatters on the arena floor after attempting a dive. Looking for any advantage she can, Bayley attempts to use the ropes as leverage to pin Belair. She fails both times. Bayley uses Belair’s hair against her so Belair uses her hair to wrap up Bayley for the pin. “Replay it right now! She used her hair! Bianca is a cheater!” screams Bayley. If Belair is fed up with her hair constantly being used against her why doesn’t she do something about it. Again, it just makes no sense. 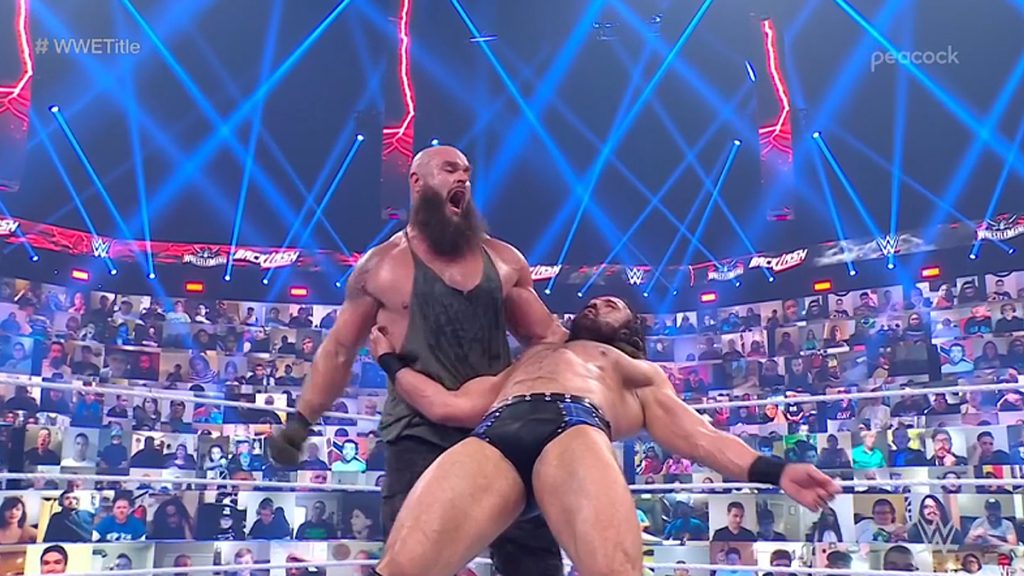 Why do Lashley and McIntyre have such a hard time with Strowman when the smaller Shane McMahon danced circles around him at WrestleMania? Say it with me…It makes no sense.

When things hit the floor the match gets out of hand. Lashley suplexs McIntyre on the rampway. McIntyre smacks Lashley’s head off the LED board and throws him through it. Cartoon sparks fly and Lashley is nowhere to be seen when McIntyre takes a peek at his handiwork.

Strowman powerbombs McIntyre through the announce table when McIntyre misses a Claymore. In the ring, McIntyre finally hits a Claymore on Strowman though. Lashley arrives on the scene before McIntyre can cover Strowman. Lashley hurls McIntyre out of the ring. He spears Strowman to retain the WWE Championship.

There are just too many headlocks and other submissions in this match which really slows things down, gives the match an uneven pacing. Cesaro is thrown out of the ring early on. He lands on his shoulder when he hits the floor and sells the injury for the rest of the bout. That selling is goofy too. Sometimes his shoulder works fine and other times it gives out. The announcing itself is really awful and muddled. A lot of things are said that just don’t make sense or become fractured thoughts that just hang there and become really distracting. The announcers claim that Roman Reigns “retired” Daniel Bryan even though the stipulation of the match in question was just Bryan’s spot on Smackdown alone not his entire presence in the WWE. Cesaro’s arm gives out during a Neuralizer. Cesaro foils many of Reigns’ attempts at a Guillotine submission but eventually he fades to black.

The next WWE pay-per-view is Hell in a Cell on June 20th.

There can be no complaints where the effort of the talent is concerned. They elevated an otherwise forgettable event. WrestleMania Backlash was prevented from being so much more and so much better though by predictable outcomes which sucked all of the tension and excitement out of the high stake encounters.