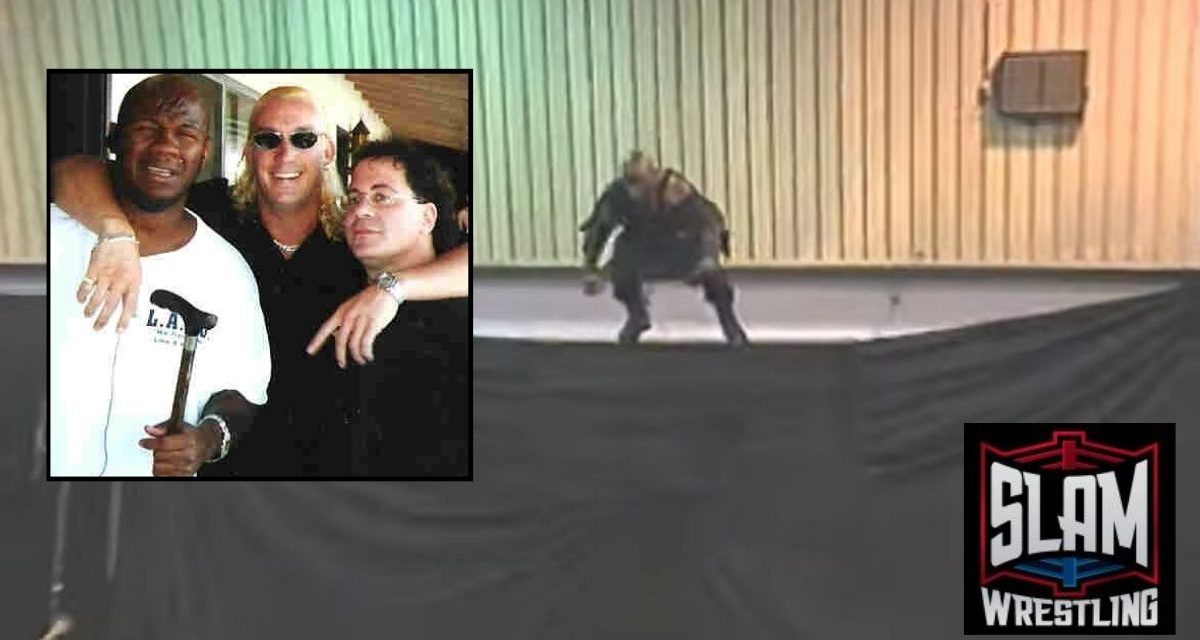 The sudden death of New Jack on May 14 got me thinking back some wild times two decades ago, and how he’d always refer to me by, “Hey Canuck!”

I had done a film titled BC Bodyslams, focused around the Vancouver, BC-based ECCW promotion. Through the process, I became very close with wrestler Steve Rizzono.

About 18 months after filming ended, I found myself in Los Angeles, doing film and business consulting. Rizzono was also based in California, up in San Francisco, and we reconnected in person down in L.A., when he wrestled in XPW. There were two occasions that summer of 2001, one in May for XPW Redemption, the other when Supreme got barbequed on July 7 at XPW Rapture, when I got to see him.

I’d first met New Jack (Jerome Young) at the May XPW card, where he came in as a replacement for Sabu and unsuccessfully challenged The Messiah (who had Lizzy Borden and XPW promoter Rob Black in his corner) for the XPW World Heavyweight Title. Somehow, New Jack took an instant liking to me. 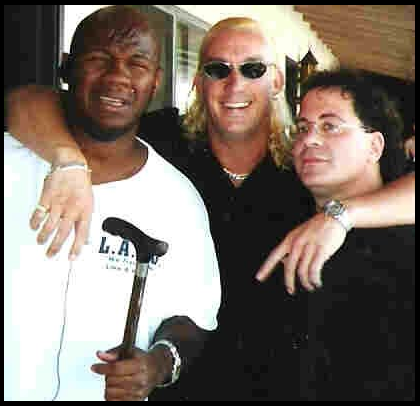 The above picture was taken on a second floor balcony at a motel on Sunset Boulevard, and the XPW crew partying in the room was quite a Star Wars cantina-like collection including Kronus, Sandman, various Cali guys who I got to know — and New Jack. I treasure this photo. New Jack is holding a legendary thick, heavy cane I had been hauling in my truck as a souvenir from the Zoo bar in Winnipeg.

As soon as I walked into massive gathering of testosterone beer and god knows what else on the motel room table, New Jack looked up at me and said, “Hey Canuck, got any pills?”

I replied, “Well, as a matter of fact…” and New Jack popped and cried out, “Get that man a chair and a beer!” 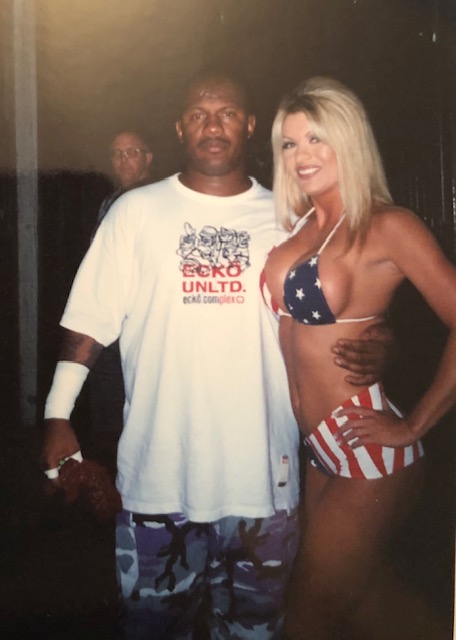 New Jack and Major Gunns at an XPW show. Photo by Marty Goldstein

Then in July, at the Olympic Auditorium before the XPW Rapture event, I was mingling around, and New Jack motioned me to follow him around the ring, and pointed up from an entrance to the second floor balcony above it.

“Hey Canuck, how high up is that, do ya figure?” I looked and stared and was kind of wondering…

He looked up at it, turned to me and said, “Ya, that’s goooood, thanks, Marty!”

That night, New Jack defeated Kronus and Homeless Jimmy in a three-way dance. At some point, New Jack used my cane from the Winnipeg’s Zoo bar, breaking it over Kronus. The match went out of the ring, and through the building and he taped Kronus to a table and went up through the crowd to that balcony and dropped the elbow onto Kronus who was trapped by the tape. What an insane dangerous bump for everyone involved. He hurt his elbow but Kronus was some kind of f***** up. I found it online here, right at the start of the clip:

Somehow New Jack’s stunt ended up being only the second wildest thing. The bout that followed was a Death Match between Kaos and Supreme, where Supreme was legit set lit on fire and was hospitalized. [I wrote about that back then too.]

Of course, New Jack’s leap onto Kronus paled in comparison to his infamous destruction of Vic Grimes at XPW Freefall in February 2002, and a Scaffold Match. About a month after wrecking Grimes, New Jack reached out and asked that I tell his side of the story. The original interview was printed on Moondog Manson’s website, but is reprinted here, by permission. It gives some interesting insight into New Jack — and Jerome, who was different than his wrestling character. I’ll keep the memories of New Jack and Jerome close, and am honored that he let me share his tale:

Over 2000 fans attended the Grand Olympic Auditorium on Feb. 23 in Los Angeles, drawn by 2 gimmick matches at XPW Freefall.

They were outraged when the lights went out (courtesy of Steve Rizzono) at the conclusion of the Major Gunns vs. Veronica Caine buck naked match. If Veronica was exposed, it was only for a millisecond. Then she was covered up by Rizzono and her heel contingent, the Enterprise.

There was also outrage at the conclusion of the feature bout, when Vic Grimes was beeled off the 40 foot high scaffold. He glanced off tables that were stacked 28 feet high under the scaffold, then dropped to the ropes, bounced off them and lay lifeless in the ring.

Why the outrage that lit up the internet, when the fans saw exactly what XPW promised, a “freefall”? They knew the scaffold was going to be 40 feet high. They knew that the match had to end with one or the other wrestler taking a bump to the mat.

What they didn’t know was if it was a work or a shoot. The eerie similarity to the accident that killed Owen Hart, a man crashing to the canvas from a great height, provoked a lot of negative emotion and strong comments from Steve Yohe and other veteran SoCal observers. The shock of the uncontrolled bump was too real for many. Was it planned that way?

It was Vic’s idea, and he got scared up there that night. He didn’t hurt me, the spot did. Cause he couldn’t do it.

He was scared to jump. I pulled him down on me. Did the job in front of my daughter, on PPV. I lost 80% of the sight in my right eye when he landed on me. Cause he can’t fuckin’ work. He won’t sell. Paul E. wanted us both carried out. That asshole walked out with his hands raised and I’m damn near blind on the stretcher.

I’m reminded every day of that MF cause of my eye. He knew somewhere down the line… he knows I don’t like him. He’s the biggest BS’er in the world.

Nobody liked him in ECW. Vic can’t f***in’ work and has a big mouth talkin’ s**t about me- like when I worked for Bill Behrens (NWA Georgia).

His mouth got him fired in New York.

He came out on the last ECW TV dressed like me, said I OK’d it. I DARED him to come up to me like that.

He got scared up there at Freefall. Why say you do the match and then pussy out of the bump? I thought of hurting him but I care about my freedom more than him. He was in the back getting messed up before the show, then gets scared up there. He’s an idiot.

I tossed him just far enough. The tables were there to break his fall. He f***ed that up. It was not a soft landing, but that’s his own fault. He escaped with his life thanks to me.

He even f***ed the angle up, he was signing autographs after the show. Even that angle he fucked up.

I can get through s**t with guys and make money. Only Rob Black knows, so please post this s**t.

I’m through working Vic Grimes. Never, never again. Don’t nobody like him. I am done with Vic Grimes.”