Who was he? Supreme! 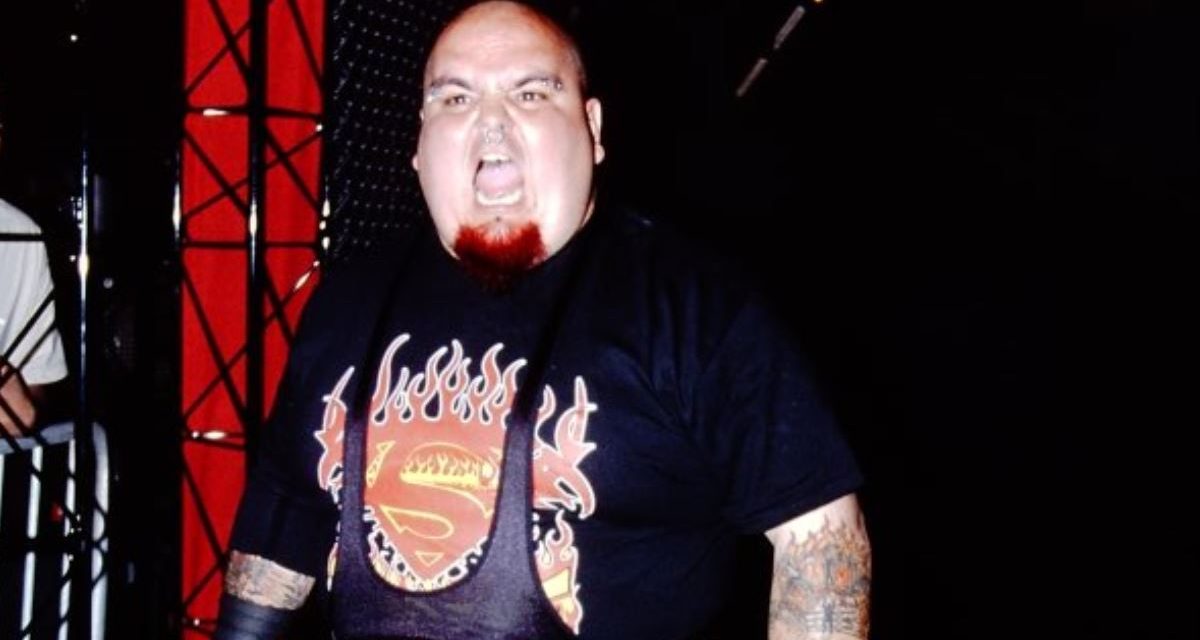 The call would go out to the audience, “Who am I?” And the fans would reply with fervor, “Supreme!” It was an appropriate and fun way for Southern California wrestling fans to celebrate Lester Perfors — Supreme — who died from a heart attack on May 6. He was 49 years old.

Perfors was hardly your traditional wrestler. With his piercings and tattoos, and way-less-than-chiseled physique, he was instead a 6-foot, 250-pound presence, and a champion in countless Death Match bouts and tournaments during his career.

Going into 1995, Perfors and his nephew, Joseph Anthony Muñoz, nine years younger, trained to be professional wrestlers, and debuted together on July 7, 1995. Muñoz became known as Kaos. The family connection would be a constant for Supreme during his career.

At the Southern California Death Match Hall of Fame ceremony in 2019, Supreme was one of the honourees, along with frequent opponent Messiah (William Welch). (Perfors would call it “the most awesome thing in my wrestling career so far.”)

To honour Perfors, his daughter, Rebecca, who wrestles as Sage Sin, began the tribute:

“Supreme would do about anything for the ones that he loves,” she said. “He would defend them inside and outside the ring, us included, truly having a heart of gold. When he bestowed his name upon me, I instantly became part of his family, became his daughter, and was beyond proud to carry out part of his legacy. So many people are influenced by this man, fans and wrestlers alike.”

“I have seen him bloodied and broken so many times, in so many different ways, but I was never afraid. No, despite the grievous injuries and the insane spectacles he put on, no, I wasn’t afraid, I was inspired. He inspired me to fight on, always. He inspired me to never give up, to pursue victory at any cost, against any opponent,” he said. “Wrestling impacted his personality on a supreme level. He had been a pillar of strength and perseverance my entire life. He’s kind, he’s caring, he would do anything for the ones he loves. And he’s infinitely wise in everything he says and does.”

Wise might not be the best word to describe Death Match wrestling, though,

In an interview with In Your Head Wrestling (IYH) in 2012, Perfors talked about hardcore wrestling: “It’s something different. It’s just something more realistic about it, honestly,” he said. “I’m a wrestler and what I do is for the fans.”

Naturally, Supreme was also asked to describe some injuries. He had five piercings ripped out through wrestling, and the worst was when his nose ring was ripped out when he was hit by a garbage can lid, “but it didn’t hurt that bad because it broke my nose, so I didn’t feel it as bad as it would have been.”

Supreme cracked his ribs when he fell off a ladder, and the scars on his arm and chest never healed after being set on fire. [Not for the faint of heart, here’s the video.]

The legacy of Supreme was preserved in a video game, Backyard Wrestling 2: There Goes the Neighborhood, which came out in late 2004 for PlayStation 2 and Xbox.

Kevin Gill was the creator of the Backyard Wrestling series of video games, and also an announcer, podcaster, and commentator. He reflected on Supreme.

“Lester sacrificed a lot for wrestling, with his various injuries, and hospitalizations, and the burns. I was glad to help immortalize his contributions by putting him in the game,” said Gill. Gill recalled that Supreme was more than happy to do media for the video game, that “he always did it with a little glimmer in his eye.”

Gill launched into a story about the dangers of Death Match wrestling:

After the game, I went over to Japan with Mad Man Pondo and Supreme. We were doing an appearance at Big Japan Pro Wrestling show, it was the backyard wrestlers from America versus Big Japan. We were in Korukuen Hall, and I was the guest ring announcer for this match. I forget everyone who was in the match, but Pondo and Supreme were on different sides. But after I did the ring announcing, they wanted me to stay around the ring, almost like a manager for the backyard guys.

Very early in the match, Pondo and Supreme go out of the ring and start fighting in the crowd. I’m there taking pictures, trying to take advantage of being ringside — this was my first time in Japan, so I wanted to get every experience I could. Pondo and Supreme go fighting up the stairs.

At one point, Pondo is laying on the floor. Supreme picked up a chair, and hit Pondo with a chair in a way that I’d never seen anyone ever hit anyone else with a chair before. Supreme hit him almost like a guillotine — the legs were pointing down, and Supreme just kind of drove the chair down directly in Pondo’s face, right above the eyebrow. It split Pondo wide open right away. Literally, right before my eyes, I could see Pondo’s head split open. I leaned over to Pondo and asked, “Damn, Pondo, are you okay?” And Pondo looks at me and says, “Hardway like a mother-f***er!,” and goes right back into the match.

Reached after Perfors’ death, Pondo (Kevin Canady) talked about Supreme. “The first time I met him was at the release party for Backyard Wrestling 2: There Goes the Neighborhood video game. I did a match against New Jack, and Supreme did a run-in. That’s when we met and got close. For the video game tour, they asked who they should bring in to Japan, and I said they should bring in Supreme.”

“He was one of the nicest guys in the business. He always treated me right, we had a lot of respect for each other,” said Pondo. “When his daughter (Sage Sin) came to work with me, she told me that her dad told her that I’d take care of her.”

The legacy of Supreme continues on beyond family. Working with Kaos, Supreme was a trainer.

“He trained a number of guys like Brody King, Eli [Drake], and Jake Atlas, who’s now with NXT,” said Gill. “He definitely was a big influence that transcends the in-ring violence and the crazy stuff that he did in the ring. I always think of that incident when he got set on fire – I mean, damn. In a world of crazy, that was crazy to another level.”

In a tweet, Brody King (@Brodyxking) thanked his trainers. “Without Supreme there would be no @JoeyKaosMunoz or @SantinoBros and without them there would no Jake Atlas or Brody King. My thoughts are with Joey and his family. Rest In Peace Supreme. WHO AM I?!”

“The last time I saw [Supreme], was about four or five months ago, when GameChanger Wrestling did a series of shows in Los Angeles,” said Gill. “I was doing commentary at the shows with Eli Everfly, and he had been trained in part by Lester, and was very much influenced by him. He just came by to see everybody and say hi. You have this company from New Jersey coming into L.A. for a show, and to have him come in and support the show and say hello, that meant a lot.”

Perfors never stopped being a fan. Gill shared a story that he had heard from a fan who went to their first wrestling show. “Before the show, they saw Supreme outside the building. They went up to him to take a picture, and he ended up offering them a shot of Jack Daniels. That was just the kind of person he was — he wanted to share an experience with them, just make a connection with them.”

Veteran lucha wrestler Kurt Brown shared memories of Perfors on Facebook. “This passing hits me very hard. When Dan Farren, Larry Doyle and I used to promote and wrestle on shows in the mid ’90s, we often saw this tank of a kid named Lester sitting in the front row with his nephew Joey. Short in stature but bad-ass looking as hell, we all nicknamed him Mini Bam Bam Bigelow. That said, once he shifted from fandom to actively wrestling, we saw that he didn’t just look bad-ass, he was truly bad ass! Hence he was no longer Bam Bam Bigelow, but our own SoCal version of Mad Dog Vachon.”

Brown, who wrestled as Vandal Drummond, Lucky Pierre and under various other names, said later when Supreme was a wrestler that he was warned to watch out, that Lester was very stiff. “I got in there with him, and honestly, I felt neither punch nor sting throughout the entire match. Lester loved working stiff, VERY stiff, but could also work light-as-a-feather with those of us who wanted to work smoothly as possible. And when he gave you a hug, you felt very loved by a dear friend!”

At the 2019 Death Match Hall of Fame ceremony, Perfors talked about why he did it all.

“First and foremost, I was always a wrestler, but Death Match was my passion. I loved it. And every time I went out there to perform, put my body on the line, I did it for all of you, for the fans. What would you want to see? What would I want to see someone do? So I did some crazy shit. I’ve been put on fire, I went through tables, I went through, God knows, ladders, however high. I did all of this for you … because I didn’t get paid that much!”

Even more apt was a line from his interview with IYH. Supreme said he wanted the fans to be “happy, happy, happy, even though I get hurt, hurt, hurt.”

There is a GoFundMe to support Perfors’ family after his unexpected passing on May 6, 2020 from a heart attack. To donate, click here.