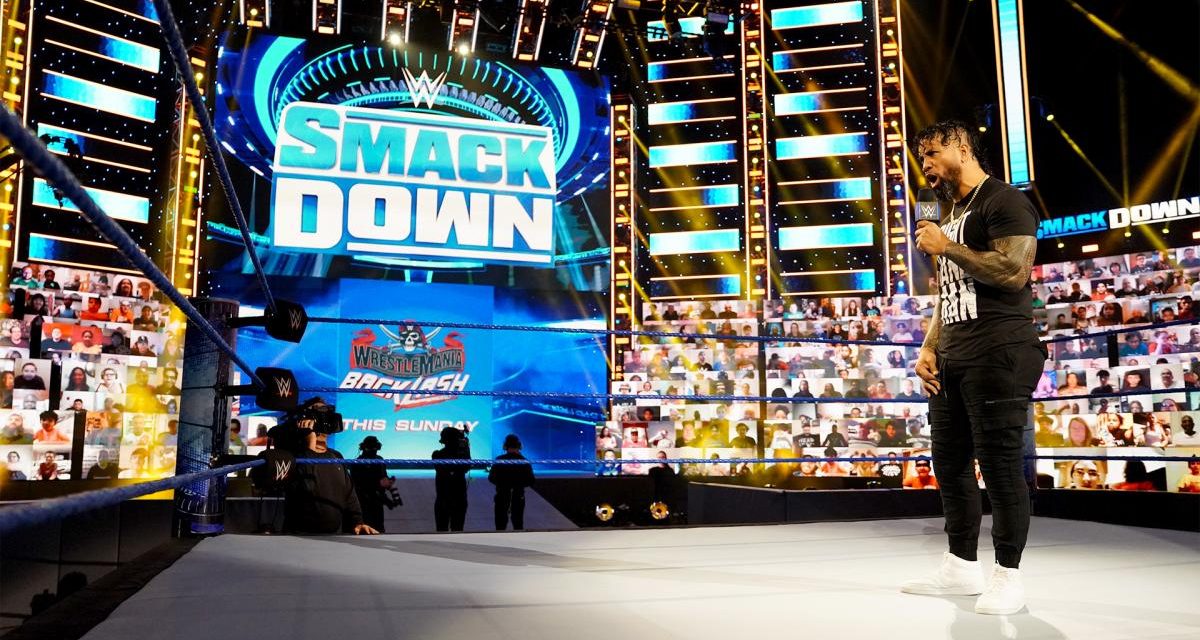 Featuring an awards ceremony, this May 14th episode of SmackDown also hosts the in-ring return of a WWE Superstar.

Jey Uso comes out and gives a praise-heavy introduction for the entrance of Roman Reigns. Roman grabs a microphone and talks himself up as usual. He says that Cesaro simply couldn’t fill the roles that Roman does. He moves on to talk about Jimmy Uso.

Before he can say anything, Jimmy interrupts him. He calls Jey the same rude word as before, and he says that Jey should join him, because Roman’s going to lose to Cesaro at Backlash. Jimmy says that he and Jey could go get the tag titles, and then they wouldn’t need Roman. Roman tells him to fight Cesaro tonight, to prove that he can do what he says Roman won’t be able to: beat the Swiss Cyborg. Cesaro comes out and accepts the challenge.

Nia takes control early against Tamina, throwing her into the corner and tagging in Shayna. Tamina fights back, shoving her way out of the enemy corner. She shoves Shayna to her corner and tags in Natalya, who dropkicks the back of the head of Shayna and pins her for 1. Natalya tags Tamina back in to deliver a clothesline, and then Natalya tags herself in to deliver a slingshot/Samoan drop combo.

Reginald gets up on the apron and distracts the ref from counting the cover, so the ref throws him out. Tamina runs out and attacks Nia outside the ring, but Nia hits her with a Samoan Drop into the barricade. Back in the ring, Shayna delivers a brutal knee to Natalya for a 2 count as we go to commercial. 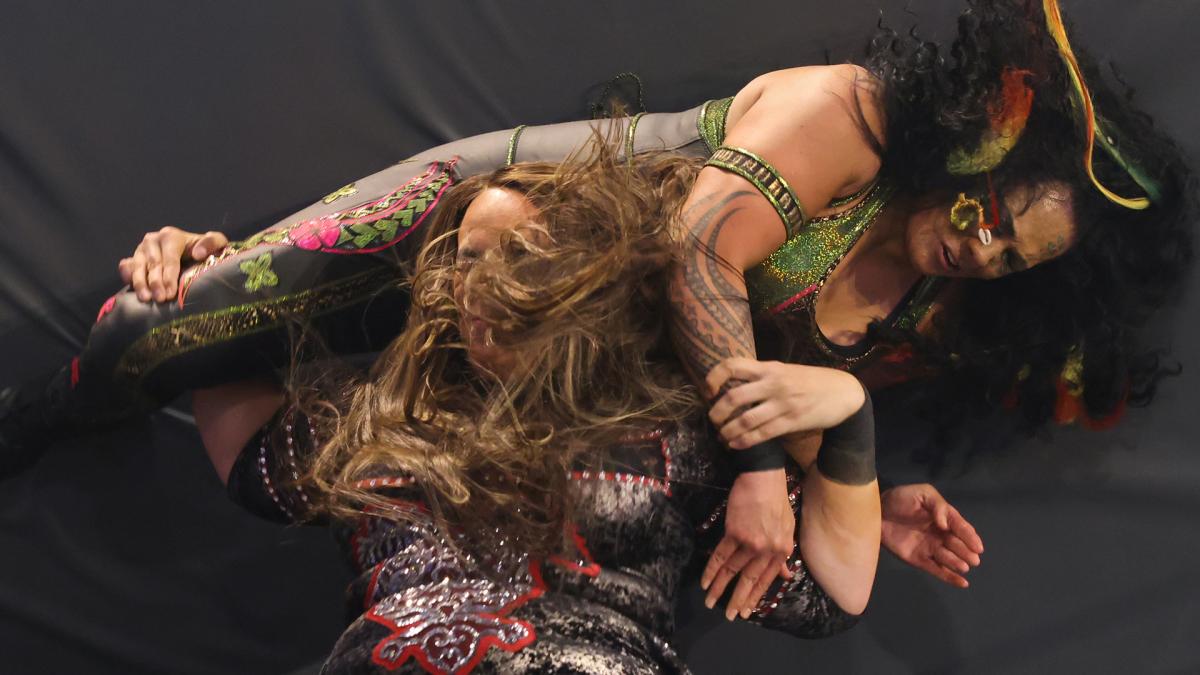 Tamina get slammed into the barricade by Nia Jax. Photo: WWE

When we come back, Nia is dropping an elbow onto Natalya for 2. Nia hits a hip attack in the corner, and she tags in Shayna, who stomps the arm of Natalya. Shayna tags in Nia to deliver a side slam/knee combo. Tamina comes back in and slams Shayna onto Nia to prevent the pin. Both women tag in their partners, and Tamina comes in hot with a slingblade. She goes for an attack in the corner, but Shayna puts her up on the second rope and twists her leg.

Tamina kicks Shayna to the floor and pins her for 2, but when she goes to the top rope, Shayna knees her in the head and tags in Nia, who goes for a superplex. Tamina headbutts Nia away, and on the outside of the ring, Natalya grabs Shayna and hits her with a German Suplex. Nia grabs Natalya and hits her with a Samoan Drop, but Tamina hits Nia with the Superfly Splash immediately after to get the win.

Why, oh why, did this not happen at WrestleMania. They get fireworks for their victory, they give an emotional speech, this just seems exactly like what would’ve happened at WrestleMania, but they did it here, and I just can’t tell you why.

Apollo Crews hosts an award ceremony for Commander Azeez. Azeez stands on a podium, because he wasn’t tall enough already. Crews says that he’s going to be Intercontinental Champion for life, with Azeez by his side. He presents Azeez with the Nigerian Medal of Honor, and Big E appears on the TitanTron, telling him not to get too comfortable with “his” title.

Sami comes out and says that the title is actually his. Kevin Owens comes out, and all heck breaks loose. Sami runs away to escape Owens, so K.O. turns his assault on Azeez and Apollo. Azeez and Apollo give him a beating, but Big E comes in and tosses Azeez out of the ring. Owens delivers a superkick to both Big E and Apollo, and Sami Zayn comes in and looks for the Helluva Kick on Owens, but he gets hit with a Stunner. Big E hits Owens with the Big Ending, but when he looks for the same move on Apollo, Azeez pulls the champ to safety.

Ziggler uses his power advantage to bully Rey early with wrestling holds and shoulder tackles. Rey uses Ziggler’s own momentum to toss him to the outside and slides under the bottom rope to splash him as we go to commercial.

When we come back, Ziggler is punching and taunting Rey. Rey looks to rally with some punches of his own, but when he goes for a crossbody, Ziggler moves out of the way, and Rey crashes to the mat. Ziggler delivers a wicked spinning slam to Rey for a close 2 before locking in a painful arm submission.

Rey fights out of it, but Ziggler hits Rey with a powerful uppercut for 2 to stop his momentum. Ziggler locks in a modified bow-and-arrow, and he lets go to toss Rey into the turnbuckle. Ziggler goes for an attack in the corner, but Rey hits him with a kick and a satellite DDT. 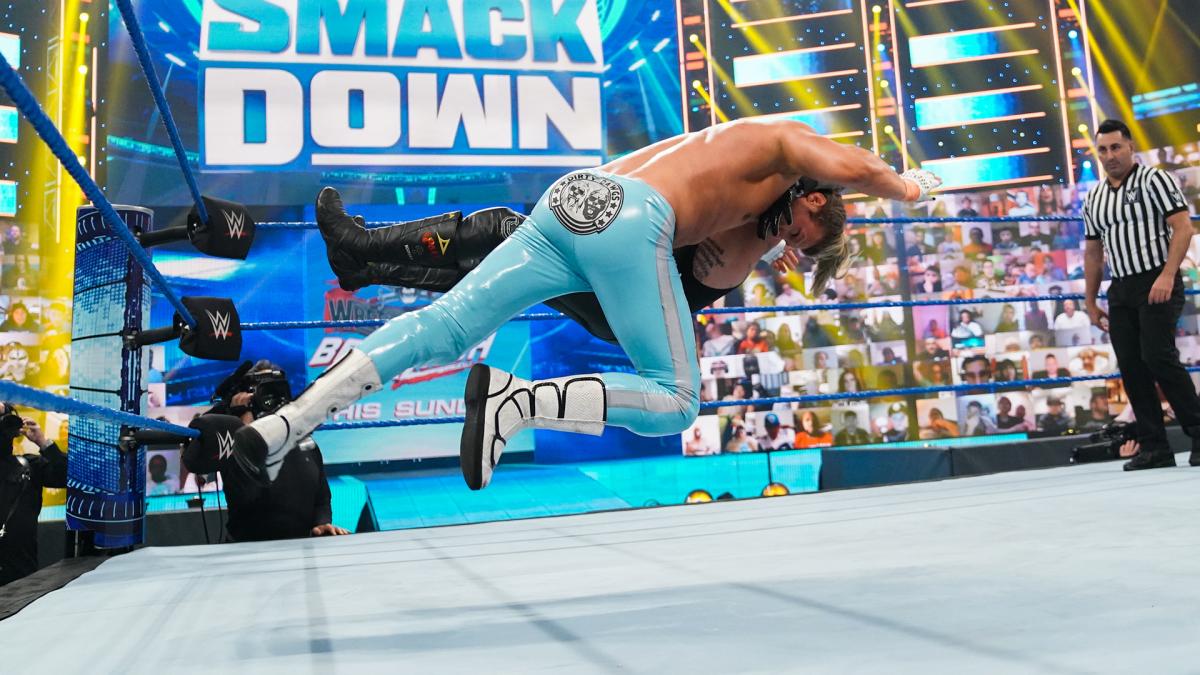 Rey goes to the top rope, but Ziggler meets him there. The Show-Off goes for a superplex, but Rey shoves him off the turnbuckle and hits a seated senton and a kick to the head for a close 2. Rey looks for the 619, but Ziggler reverses it into the Famouser for his own close 2. Ziggler goes for the Superkick, but Rey dodges it and trips him into position for the 619. Ziggler avoids the 619 again with a Superkick that gets him a 2 count, but when he goes for a scoop slam, Rey rolls him up to get the sneaky win, just like his son.

Cesaro is interviewed backstage, and he talks about his “Little Engine That Could” style self-encouragement over the years that got him where he is today. He says he’s not going to take Jimmy Uso lightly, but that Jimmy needs to decide whether he wants to be known as “Jimmy Uso,” or Roman Reigns’ cousin.

SmackDown Women’s Champion Bianca Belair is interviewed by Michael Cole. She is very quickly interrupted by Bayley, who says that she’s going to take back “her title” on Sunday. There’s a lot of false title claims and interruptions tonight. Bayley laughs at Bayley once again, so Belair reminds her that she was barely present at WrestleMania, while Belair was in the main event. Bayley stops laughing after that, and promises to bring Belair’s reign to an end.

The two Kings lock up, and Corbin strikes with a knee to the gut. Nakamura hits a kick and then delivers Good Vibrations in the corner, but when Nakamura goes for an attack in the corner, Corbin moves and hits Nakamura with a right. 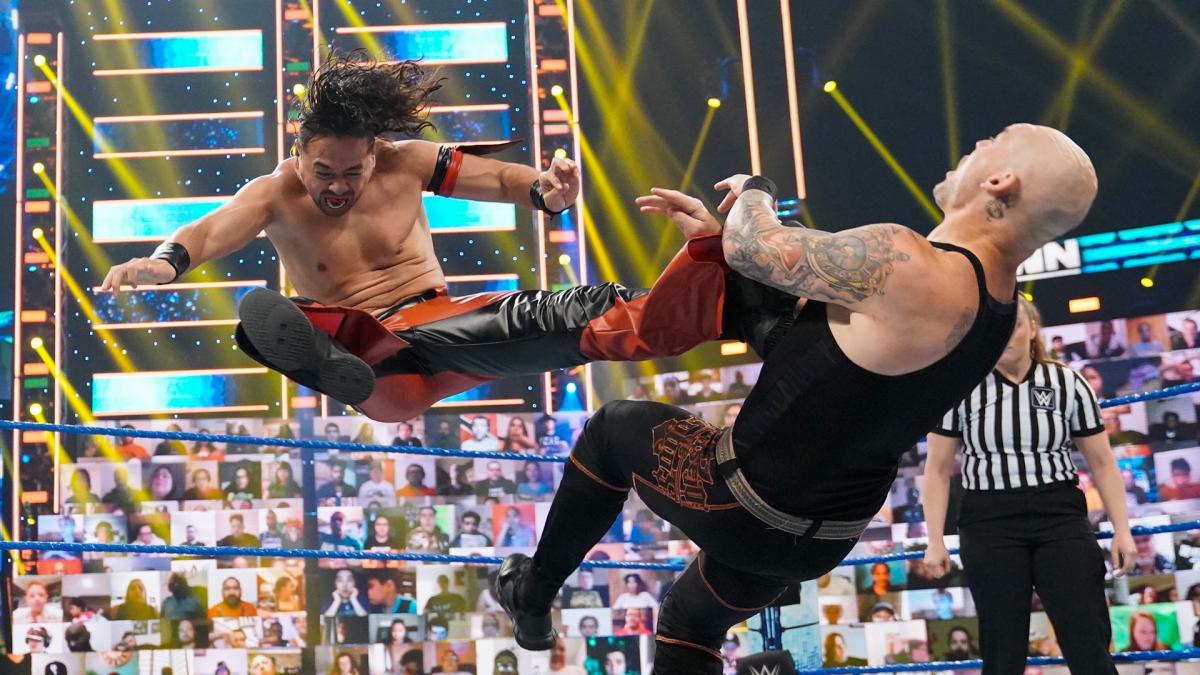 I’m calling it right now: Nakamura is going to be the next king of the ring. Photo: WWE

The King chokes Nakamura on the ropes before delivering a knee to the gut again and delivering some elbows for 2. Nakamura rallies with a single leg dropkick, and he continues the assault with a series of strikes. Corbin goes for his ring-around-the-ringpost clothesline, but Nakamura reverses it into an armbar. Corbin reverses the armbar into a pin to get a sneaky victory.

After the match, Corbin tosses Nakamura out of the ring so he can celebrate. Nakamura comes back in and delivers a kick and a Kinshasa to the king. The King of Strong Style grabs Corbin’s crown and puts in on himself. Frankly, it looks awesome on him.

Backstage, Apollo Crews yells at Adam Pearce at Sonya Deville for what happened at his award ceremony today. Pearce retaliates against Apollo’s verbal assault by making him defend his title against Owens, Big E, and Zayn in a Fatal Four way match next week.

Aleister Black comes to us with another story from Tales of the Dark Father. He says Father taught him to stop denying his true nature which unlocked his true strength. He once again says that he could teach us all the same lesson, but he won’t, because we aren’t participants, we’re spectators.

The two kick off the match by trading holds before Cesaro hits a strong dropkick. Cesaro says “welcome back Uce,” and Jimmy gets fired up. He goes for a crossbody, but Cesaro catches him and delivers a powerful slam for 2. Jimmy seems to have aggravated his leg injury once more, but it’s a ploy, allowing him to deliver a superkick and a Samoan Drop for 2. Jimmy locks in a headlock, and when Cesaro fights out of it, he goes for a suplex, but the Swiss Cyborg reverses it into a suplex of his own.

Jimmy goes for another superkick, and when Cesaro catches his leg, he delivers an enziguri for 2. Jimmy goes for a hip attack, but Cesaro dodges it and rolls Jimmy up for 2. Cesaro reverses a superkick into an uppercut, but when he goes for a spear in the corner, Jimmy dodges it, and Cesaro goes into the ringpost. Jimmy tosses his opponent to the outside and delivers a suicide dive as we go to commercial. 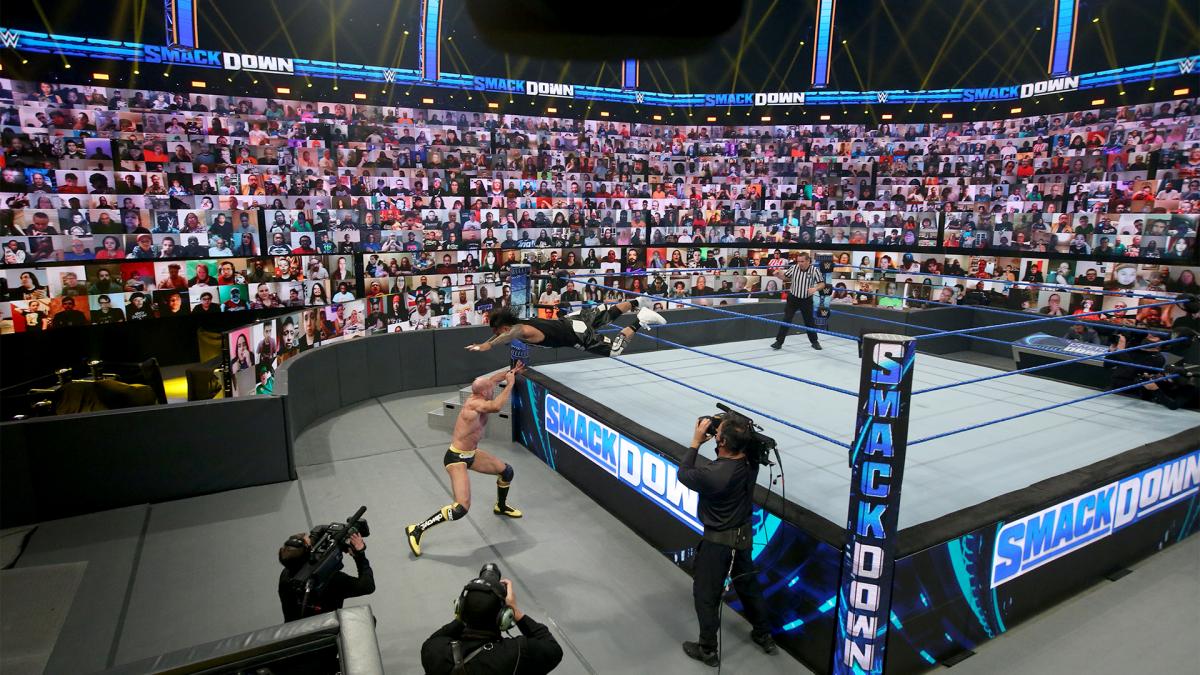 This is just a really cool shot. Photo: WWE

When we come back, Cesaro is hitting Jimmy with uppercut after uppercut in the corner. He finishes the sequence off with a clothesline for 2. Cesaro goes for a springboard uppercut, but gets caught with a superkick for 2. Jimmy goes to the top rope and looks for the Uso Splash, but Cesaro catches him with an uppercut. He climbs to the top and slams Jimmy with a superplex for a close 2.

Jimmy rolls to the outside, and Cesaro dives onto him with a cannonball. He continues the assault by uppercutting him into the barricade. Unfortunately, Roman Reigns attacks Cesaro, stopping the match by disqualification.

After the match, Jimmy yells at Roman for getting in his way, and the two argue. Cesaro gets a second wind and attacks Jey, and Roman goes back into the ring to help him. Cesaro takes out Roman and Jimmy, and Roman runs away to the ramp. Cesaro stares right at Roman while he delivers the Neutralizer to Jey. He tells Roman to do something, and Roman stays motionless while Cesaro delivers another Neutralizer.

As I’m sure you can tell by the match ratings, I see this as just a perfectly average show. The title change was great, but my enjoyment of that was entirely outweighed by my feelings of “Why didn’t this happen at WrestleMania?”