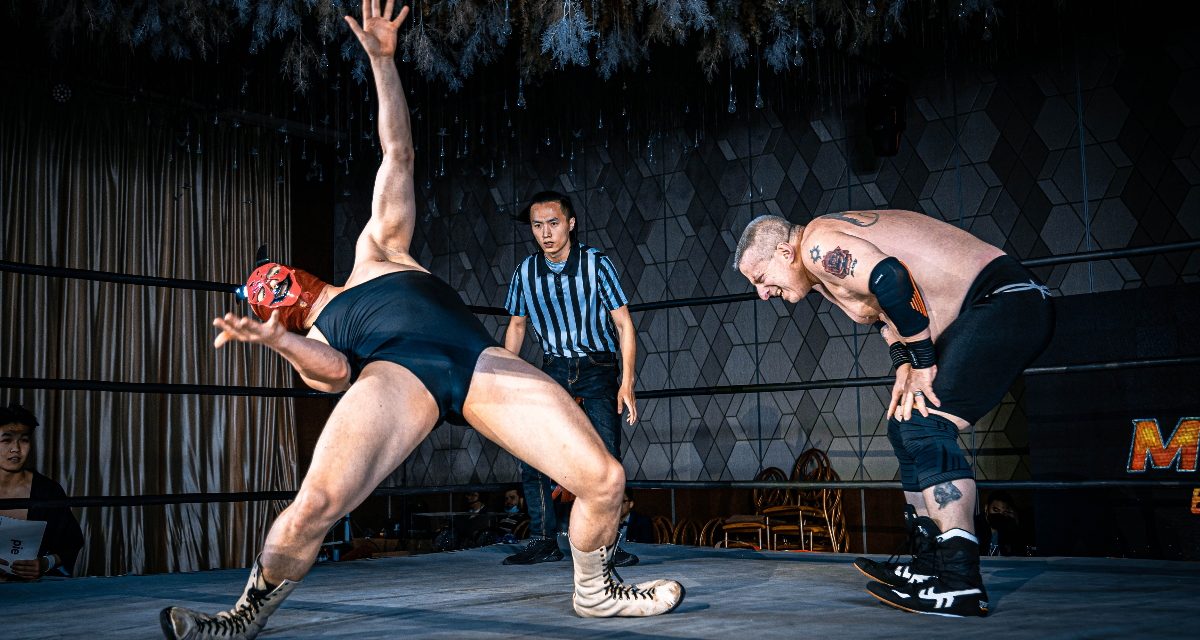 This week the tournament kicks off.

Steve tutors Tao with flash cards as they enter. 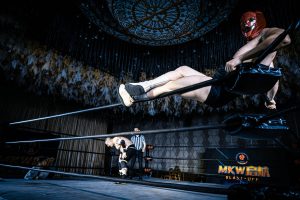 Voodoo takes a relaxing breather as Steve the ESL Teacher gasps for air.

It begins with a “yay” “boo” / “voo doo” “Teacher”. Voodoo grows frustrated with Steve as they debate and kicks him in the gut then hits the ropes for a shoulder block. Steve stays up and returns the favour, VooDoo stays upright as well. Double shoulder block sends them both down.

Voodoo nips up, Steve can’t but tries to repeatedly. Voodoo helps him up, raises his hand then once again boots Steve and hits the ropes. This time Steve hits the ropes too but is outsmarted again after they end up in a criss cross and Voodoo takes a breather while Steve keeps running until gassing himself.

Angered, Steve charges Voodoo in the corner who evades to the outside. Voodoo evades more strikes there while “Thriller” dancing on the apron. Voodoo sends Steve down with a running line but then Voodoo misses a somersault senton off the top.

Steve takes control with strikes and a slam. Voodoo fights back but gets shut down. Steve strings together 2 suplexes then a fisherman buster for the first cover in the match.

Steve checks in with Tao on the progress of his cards allowing Voodoo to come to. After a few tackles Voodoo fires Steve off the ropes and headbutts him down. Voodoo sits on the top and waits for Steve to get up. Diving headbutt sends Steve down again. He sets Steve up in the corner and signals for the jabber. Tao enters the ring and asks Voodoo to stop. Voodoo tosses him into Steve, picks him up on his shoulders. Steve kicks Voodoo in the gut and double under hooks him, nailing the Final Exam for the finish.

Match 2: Poppy vs Nor “Phoenix” Diana

This match is from Malaysia’s APAC wrestling studio.

They lockup and trade arm locks to start. After a separation Poppy pouches Diana and takes a headlock but gets sent to the ropes they go through a number of exchanges but finally Diana executes a take down into a bridging cover then a neck breaker both for barely two.

Poppy rolls to the apron and knees Poppy to take control. She bends Diana around the bottom post while standing on the floor and continues on Nor’s back with a kneeling surfboard, snap suplex and a knee to the face but only gets one counts.

Diana finally turns things around with a Thesz press followed by clotheslines and a fisherman buster but only gets one.

A series of reversals ends with Poppy hitting an Alabama slam for two. After a sunset flip Diana gets to her feet first and takes control finally driving the back of Poppy’s head into her knee for the finish.

Cold Ray enters and takes the mic saying that just because he’s in the tag team tournament, that his journey to take the MKW world championship from Zombie Dragon – which started from last year – isn’t finished, just delayed as he, as part of Supreme Society, first focus on becoming the first ever MKW tag team champions.

Ray and Crusher start but Ray immediately tags out to Johnny. Crusher ascends to the middle rope to match height with Johnny just picks him up onto his shoulders. Crusher slips out and fires a forearm that does not phase Johnny. He ducks some strikes but gets caught when he tries to cross body Johnny and gets slammed.

Johnny takes his time torturing Crusher and teases Mamba. He tags to Cold Ray after a corner avalanche.

Ray keeps control and hits a bulldog for two. After a dropkick his STO attempt gets countered and Crusher STO’s Ray.

Crusher tags to Mamba and they double team Ray with kicks. And stop Johnny with super kicks when he tries to enter.  619 & knee combo on Ray for two. Johnny gets in and Ray jumps up back to back onto him and kicks their opponents from that high ground. 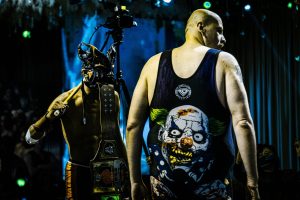 Zombie Dragon distracts Little Johnny on the outside (courtesy MKW)

Champion Zombie Dragon comes down the aisle distracting the Society. Johnny exits to get in Dragons face while Ray gets super kicked by Mamba and super bulldogged by Crusher with an assist for the finish.

Advertised for next week are Lucha Mascaras versus Irish Whips in a Tag Team Title Tournament quarterfinal and Zombie Dragon putting his MKW Championship on the line versus Buffa.

A deeper dive into the tournament participants and more.

It is always fun to see Voodoo in action and made sense to have him get Team ESL over for the tournament.
It was interesting to see woman’s wrestling or wrestling period from Malasya.

The main event Tag Tournament match was fun and told a story.