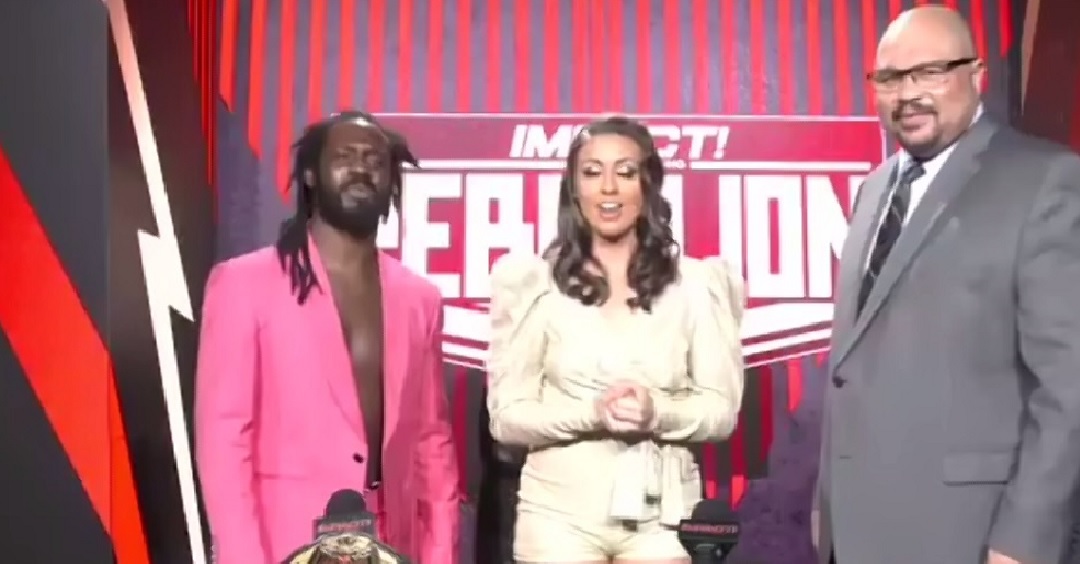 Hours before one of the most significant events in Impact Wrestling history, many of the company’s appeared at the pre-show virtual CELL-ebration  fan-fest event to answer questions from the fans, and even fan the flames for tonight’s matches.

Announcers D-Lo Brown and Gia Miller hosted a parade of stars for interviews and fan Q&As over the course of the 2-hour event. In addition to questions about their matches later tonight, many fans wanted to discuss the possibility of the stars competing against wrestlers currently in, or recently-released from, other companies.

Like with many Zoom calls, there were the occasional issues like fans forgetting to unmute themselves, or sometimes talking over the talent and vice-versa. Which led to some fun interactions between the talent and the hosts to fill the awkward silence.

Some sweet moments ensued every time a young girl named Olive asked questions, beaming as she got to interact with her heroes. Although she wasn’t the only one who got flustered, as fans from every age group – and many countries – occasionally got nervous when talking with the stars.

Impact has always been one of the most fan-friendly wrestling companies around, and while the virtual CELL-ebration events are not a full substitute for their in-person Fan InterACTION events of the past, during these times, they are the next best thing. And, like those live events, are a good way to whet the appetite of fans before the night’s main course.

Here are some of the highlights from each of the panelists from today’s CELL-ebration event:

The Knockouts Champion was the first up, and she made no bones about the pride she had in holding the title – speculating that her opponent Tenille Dashwood didn’t have that kind of commitment.

“I’ve spent the last year competing as champion, and elevating the title,” she said. “I think Tenille has been treating wrestling as a ‘side project’ (to her social media influencing). I woke up a little nervous today, because I always want to put my best foot forward. That’s how I feel whenever I defend this title, and it feels amazing.” 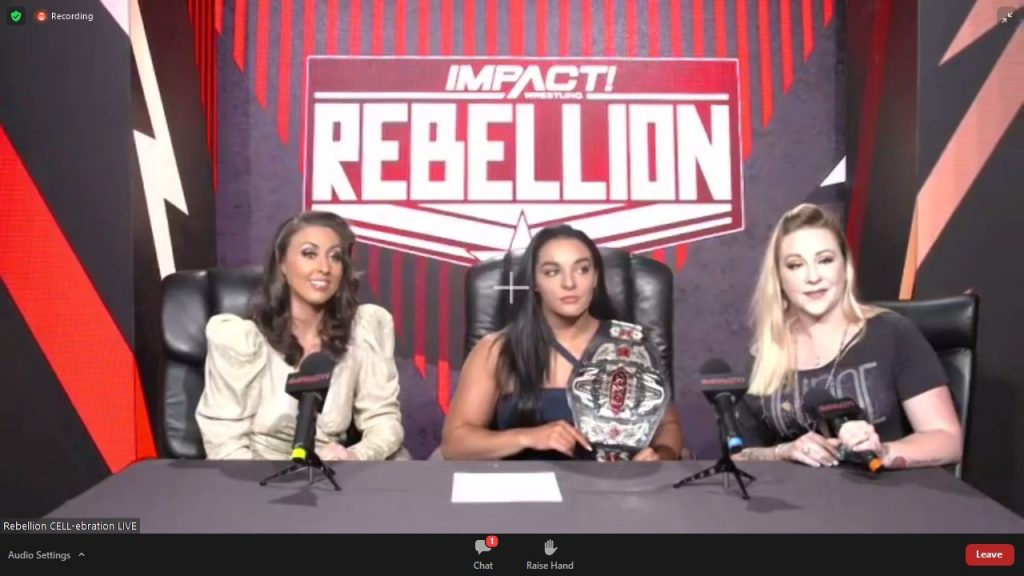 Both she and Lee said that they relish future opportunities to face other competitors, including those who aren’t in Impact today, and would certainly be interested in capturing additional gold.

“I would be up for competing for a men’s title,” Lee said. “The X-Division Championship could use a female champion. In terms of people who I’d like to face, I’ve never wrestled Cheerleader Melissa, so she’s on my list.”

Purrazzo listed recent WWE releasees Chelsea Green and Mickie James – herself a former Knockouts Champion – as opponents she would like to face when they become available.  She also mentioned Cassie Lee and Jessie McKay, formerly known as Peyton Royce and Billie Kay, aka the Iiconics, as a team she’d like to compete against, along with Kimber.

“For now, though, I’m focused on the Knockouts Championship. I’m excited for the Age of Virtuosa to continue.”

The ever-confident, self-professed “show-stealer” was pretty sure of his chances of successfully retaining his X-Division Championship tonight, despite having to defend it in a Triple Threat match against Josh Alexander and TJP. 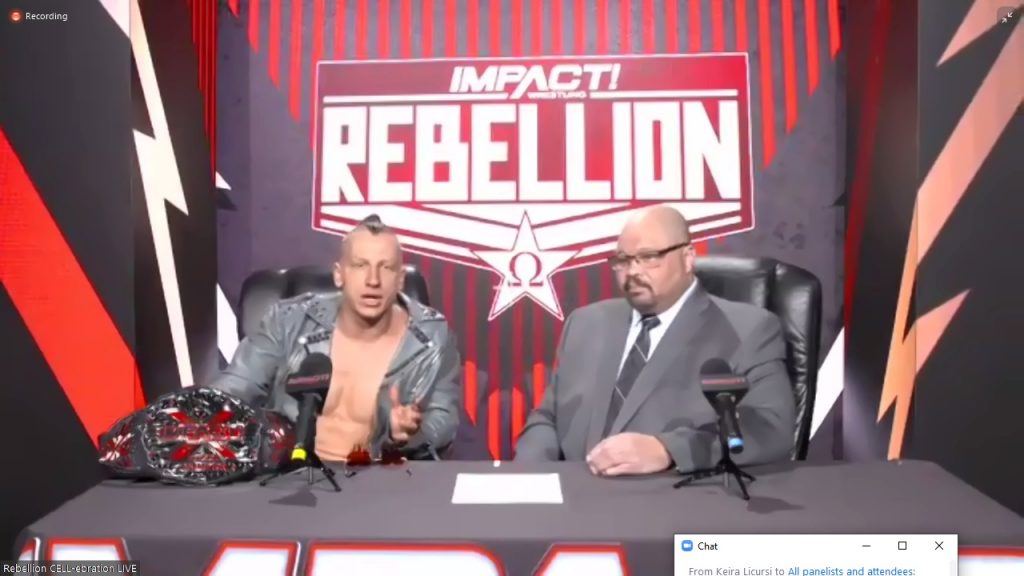 Austin noted that holding the championship is important not only for his own ego, but also to keep him in the hunt for the World Title as well.

The Knockouts Tag Team Champions are always entertaining on the mic, and they didn’t disappoint with their appearance here – despite their moment devolving into a shouting fest with their challengers Jordynne Grace and Rachel Ellering who immediately followed.

While they were there, they were their normal cocky selves, dismissing the idea of losing the titles to any team from any company.

“Our door is always open,” said Tasha Steelz. “Any tag team, any (two wrestlers) that want to come together, come at us.”

“Come take your chance,” added Kiera Hogan. “It honestly doesn’t matter who it is. We’re ready to defend our titles. That’s what champions do.”

After their brief verbal skirmish with the champs, Grace and Ellering took their turn to field questions from the fans. 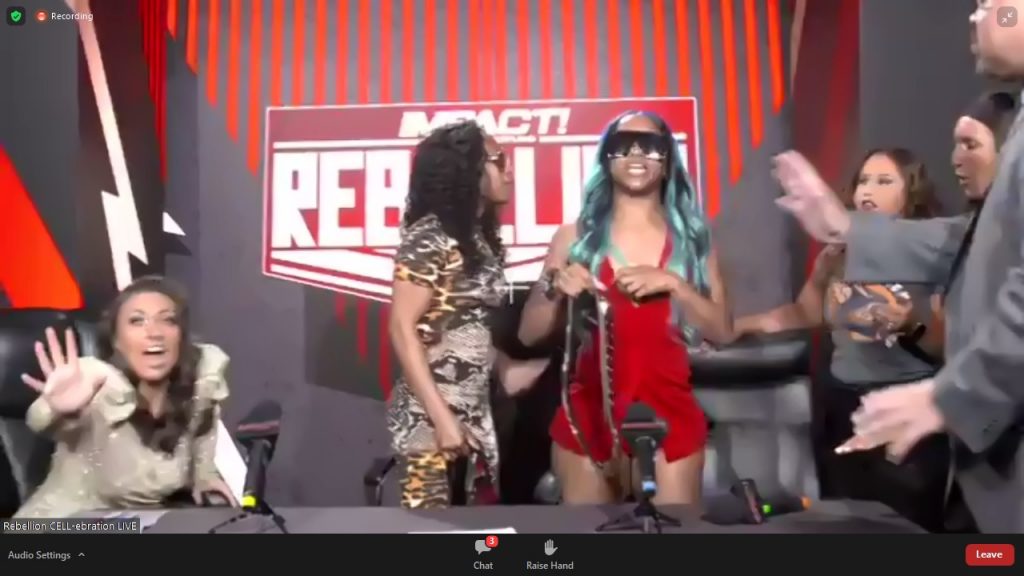 Ellering was questioned as to whether there was extra pressure on them being that they were teaming up together for the first time in Impact (indeed, this is Ellering’s Impact debut). They provided some history of their relationship, noting that they are familiar with one another, having wrestled in the past.

“The first time I met Jordynne in person,” Ellering recalled, “I actually faced off with her. And you can gain a really strong respect for someone when you face off with them. Our attributes match up really well, and I think that helps in a tag team.”

D-Lo Brown concurred with the sentiment, noting that he had a similar experience with one of his former partners: “That’s how I met Mark Henry – he punched me right in the face.”

The two commented on some of their dream opponents, and perhaps not surprisingly, they picked women who are also powerhouses like them.

“I would love to face Beth Phoenix,” said Grace. “She’s one of my heroes.”

“Bull Nakano,” replied Ellering. “I would love to see how I can stand up to here. There’s really been nobody like her.”

They also named the Sea Stars – who recently competed in Impact’s Knockouts Tag Team Championship tournament – as a team they would like to wrestle.

“One correction,” noted Ellering. “We would like to wrestle them… AND defend the Knockouts tag Team Championship after we win them tonight.”

Over the weekend, Impact Executive Vice-President Scott D’Amore suggested in an interview that they were exploring the idea of giving the Knockouts their own show, an idea that both Grace and Ellering are excited about.

“We both love women’s wrestling, so having our own TV show would be amazing,” said Ellering.

“And we’d love to main event that first episode as champions,” Grace added.

While most of the other stars were mainly questioned about their matches, Callihan was asked about other topics as well, and he answered them with his customary intensity, between insults to the fans and to host Gia Miller.

“Unmute your microphone, idiot!” he scolded one fan after several seconds of silence after they were selected to ask a question. 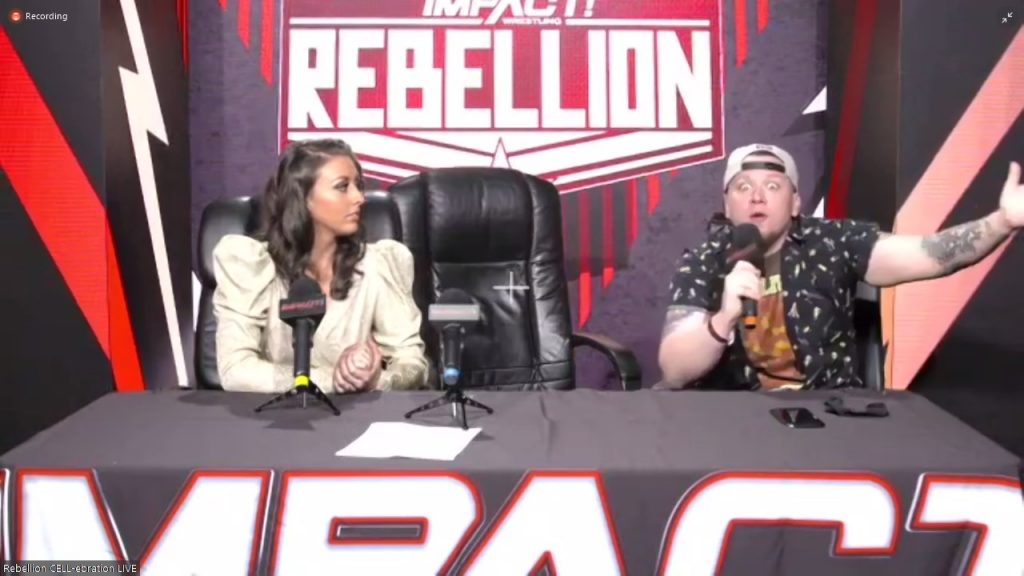 He talked about video games, challenging the entire roster to a battle on any Nintendo-64 video game. And he gave his strong endorsement for the new Mortal Kombat movie that came out this past Friday.

“It was great,” he declared. “And If anyone says otherwise, they should be thrown down a flight of stairs. It was absolutely ridiculous, and that’s what it should have been. People were criticizing it, saying it didn’t have some kind of Academy Award writing. I don’t care about the story, I just wanted to see peoples’ heads get chopped off.”

That thirst for violence may make it a long night for Trey Miguel, who faces Callihan in a Last Man Standing match. But it should also worry Impact World Champion Rich Swann should he fail to beat AEW World Champion Kenny Omega in their Title vs. Title main event match. Swann and Callihan are no strangers to each other, having been best friends and also fierce opponents in the past.

“Rich Swann better win the match tonight,” Callihan warned. “Because if he doesn’t – if he embarrasses the company again – I’m going to break his legs. Kenny Omega winning the championship would be the worst thing to ever happen to this company.”

After that intensity, Johnny Swinger was there to cleanse the palate with some hilarious in-character comedy. His 80s-style lingo-laced promo both entertained and confused the hosts to the point that they left, bringing back Rosemary with them to add some comprehensibility to the segment – although she may not have been the right person to do so.

Particularly when she spoke about the Shadows, the Demons, and the Undead Realm.

For example, in response to a question about whether she and Decay would be focusing on capturing championships, she said it wasn’t necessarily up to her.

“We always keep tabs on where the pretty little belts are. You never know when the shadows will say, ‘Go, Demon. Get them back for us.’”

While neither of them are currently scheduled to compete on Rebellion, anything is possible. If so, Swinger suggested that a safe bet – which you can place at his Swinger’s Palace Casino – would be on those two for the win. 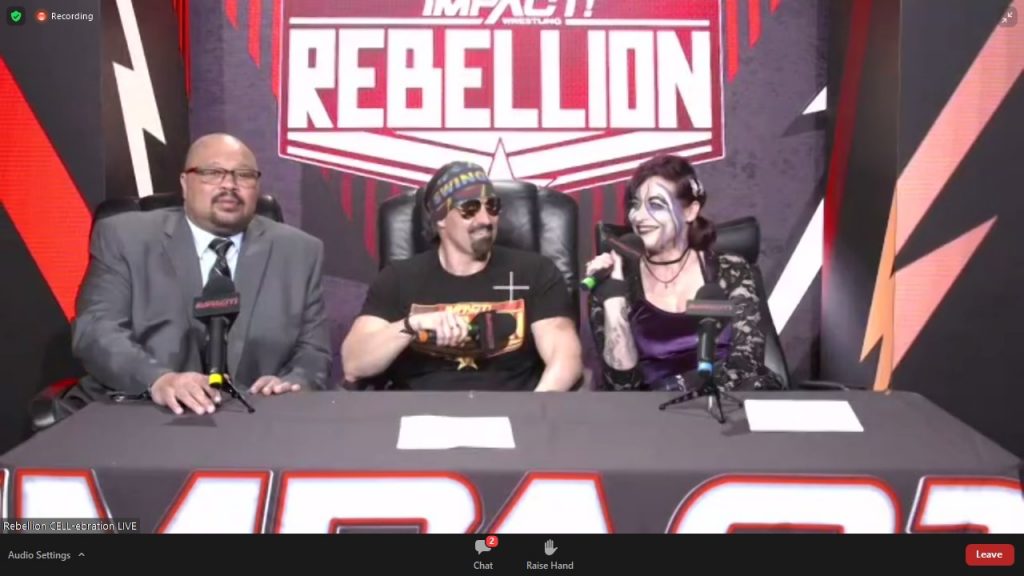 “The good money would be on the Swingman, and Rosemary too, Daddy.”

The event went from “good money” to the Good Brothers, as Luke Gallows and Karl Anderson were up next to talk about their chances against Tag Team Champions FinJuice.

“We can’t wait to (regain) our championships (and) rub it in the faces of those two idiots,” said Gallows.

Anderson noted that losing the titles in their last match with FinJuice has helped refocus them.

“I hate to admit it, but they beat us. But it won’t happen again,” he said.

If they win, the Good Brothers are hoping to continue facing the best teams from around the world, noting that Impact is the one company where that kind of thing is possible.

“This is the one place you see teams from all over,” noted Gallows. “Impact has a lot of teams coming up, and I think you’ll see some new ones develop. AEW and New Japan have some great teams too.” 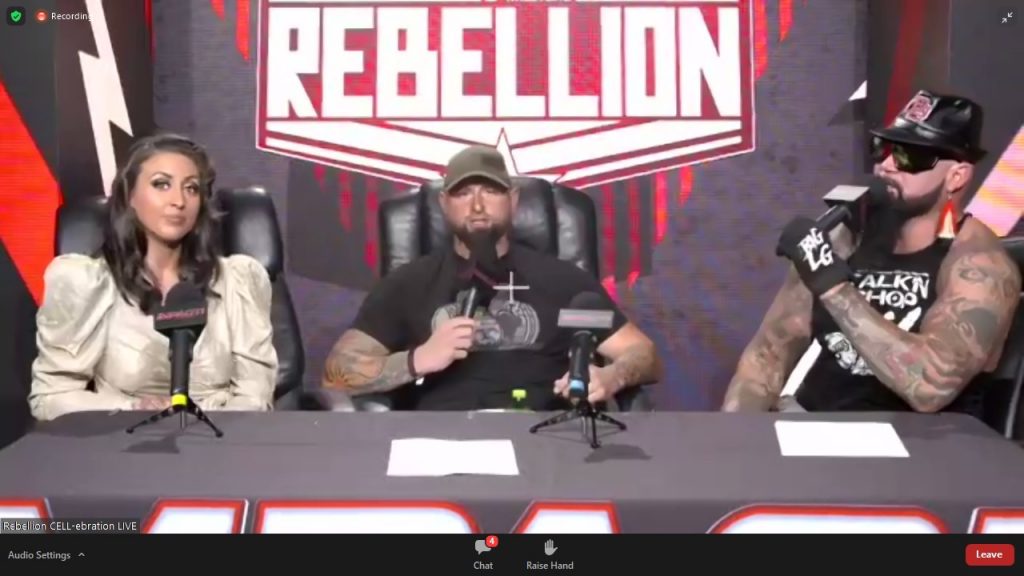 One team that they won’t challenge any time soon is the Young Bucks, with whom they have a long-standing friendship. That friendship is actually one that has been solidified recently, as the Good Brothers have been the only members of the Impact roster to regularly appear on AEW’s programming, aligning themselves with the Bucks and Kenny Omega.

“We’re belt collectors,” said Gallows. “ But as long as the AEW titles are secured around the waists of our friends, you won’t see us hunting for them.”

The World Champion main-evented the CELL-ebration event, just like he will against Omega tonight, and he was quick to express his pride in being entrusted for that spot in a majorly significant night in the history of the industry.

“Tonight’s going to prove that I can handle the spotlight,” he said. “I’ve been in some of the most famous arenas in the world. Tonight will be no different. The nervousness, the jitteriness. When you take that pressure and you turn it into diamonds, that’s what makes a star.”

“Things like this don’t just happen in our business. I’m very fortunate to be a part of it.”

Swann appreciated that he has been positioned as the underdog against Omega, and as such, he’s determined to show that is not the case.

“I have fight, I have fire, I have determination. After my (major leg injury last year), doctors told me I may not walk the same way again, much less wrestle. I’ve come back from adversity my entire life. And because of that, I know that I’m able to handle the pressure.” 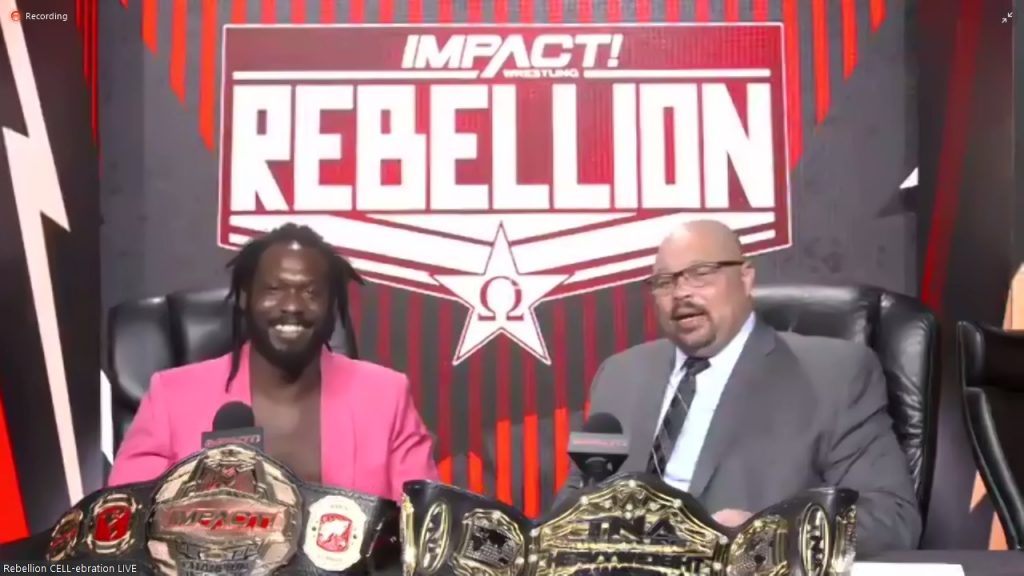 Should he win, Swann said he would be happy to defend both the AEW and Impact titles any time, any place, against members of both rosters, including his familiar nemesis Moose and other unknown commodities, specifically naming one of AEW’s top stars, Jon Moxley.

“I’ve been in the ring with Moose. Am I afraid of what he can do physically? Yeah. But I know that I’m capable of taking what he can deliver, and beating him.”

But he isn’t looking past Omega, and he knows that tonight’s match is going to be anything but a cake-walk.