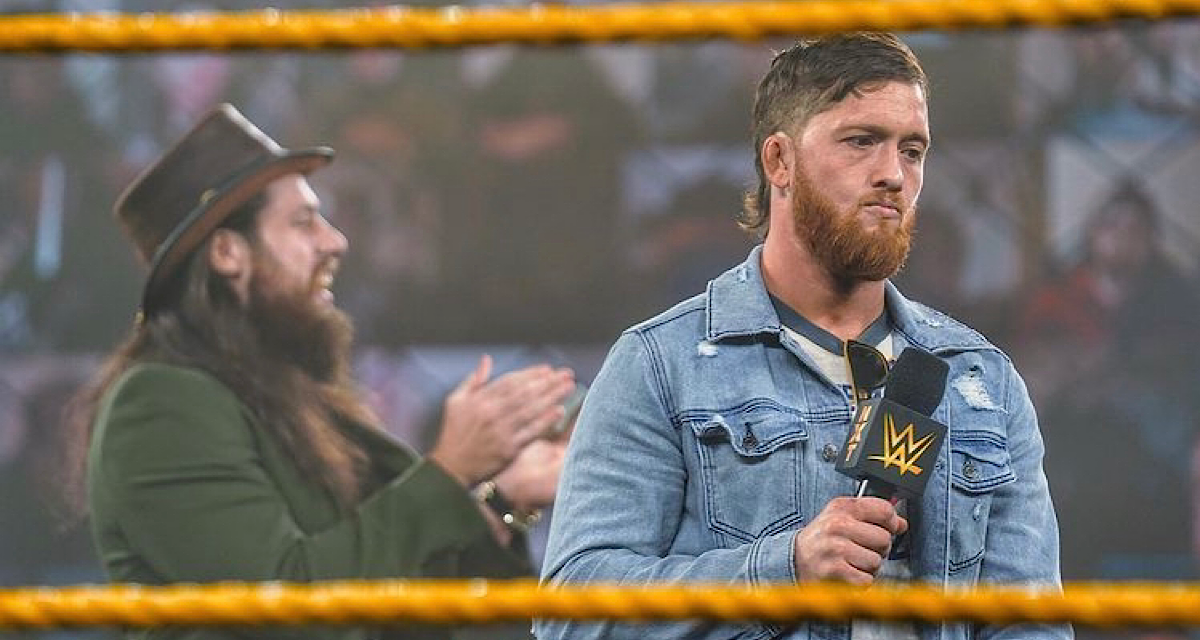 NXT on Tuesday nights might be described as the calm after the storm. Point being that overall tensions have been subdued, and the black-and-gold brand is doing its thing relatively pressure-free. With new roster members, new champions, and even a graphics and theme revamp, NXT is moving ahead into the future.

After his unsanctioned victory over rival Adam Cole at NXT TakeOver, Kyle O’Reilly opened tonight’s show. Before issuing a challenge to new NXT Champion Karrion Kross though, Cameron Grimes interrupted with some business offers — NFTs even — for “Cool Kyle”. His offer was instead returned with a punch from O’Reilly and a matchup set for later tonight.

Footage from earlier captured the entrance of Sarray into the Capitol Wrestling Center. Meeting her was General Manager William Regal and Zoey Stark, who is the official first matchup for NXT’s newest women’s division signee.

“Lemme talk to ya,” says Knight backstage preceding the bout. Despite the underwhelming impact — or lack thereof, Knight’s promo game has kept his NXT run afloat. He retreats from Lumis early on and capitalizes before picture-in-picture. Lumis though makes the comeback and sends things outside as lover Indi Hartwell watches on behind the barricade. This distraction allows Knight to connect with a finishing facebuster for the three count. The silliness continues on after the fact when Hartwell and Lumis attempt to kiss before The Way drags their stablemate away. There’s a strong feeling of diminishing returns here with this once-funny gag turned storyline.

The status of former NXT Champion Io Shirai has been in question proceeding her loss to Raquel Gonzalez at NXT TakeOver. During a sit-down interview with Beth Phoenix, her next venture is revealed when new NXT signee Frankie Monet interrupts the discussion. Monet shows some character and will definitely become an asset amidst an already stacked division.

Breezango displays a “stunning tribute” while cosplaying as royal guards, but the Brits GYV take offense; “Are you having a laugh?” asks Zack Gibson. His team eventually takes control until Fandango connects with an outside dive. After the break, James Drake misses a top-rope attack and subsequently sells a fake knee injury, which allows Gibson to capitalize from the distraction; it’s the sneaky tag tricks that make GYV stand out. Conversely, Tyler Breeze makes the short-lived comeback, but the opposition hits Ticket to Mayhem for three.

Cameron Grimes isn’t happy — not because of Kyle O’Reilly’s punch from earlier tonight, but because his Ja Morant (an NBA player, by the way) NFT was outbid by… Ted DiBiase! Speaking of gags turned storylines, this one should be pretty entertaining.

It’s Sarray’s first matchup in NXT, and the opponent is fitting for a solid showing. After trading offensive maneuvers, Stark takes control, working her opponent down. They then exchange strikes with Sarray gaining advantage with running dropkicks and a fisherman for two. Stark connects with thrust kicks, but Sarray reverses with a spinning heel kick and Saito suplex for the pinfall victory. The two competitors embrace afterwards, but Toni Storm attacks Stark from behind. The amount of talent existing in the background makes an all-women’s show/program seem plausible.

NXT Women’s Champion Raquel Gonzalez and Dakota Kai address the women’s roster; basically, she’ll take on all challengers. Judging by the attitude, is Gonzalez heel again after one week?

Candice LeRae is chastising Indi Hartwell for her Dexter Lumis obsession before brow-beating the NXT Women’s Tag Team Champions. LeRae doesn’t notice that her partner has wandered off, and Shotzi Blackheart and Ember Moon kidnap the former into their locker room. The Capitol Wrestling Center security force once again proves faulty!

A cool video package for Kushida, the new NXT Cruiserweight Champion, precedes his inaugural open challenge. Also, after dropping his usual in-ring jeans last week, he’s apparently wrestling barefoot going forward. Don’t ask which piece of clothing is going next week. Oney Lorcan answers the call, and the competitors commence in a grappling exchange before the champion connects with a high kick. After the break, Lorcan gains control and softens the champ with strikes, eventually connecting with a blockbuster for two. He delivers some amazingly loud chops, but Kushida, attacking the injured arm, cinches the Hoverboard Lock to retain.

The former champion Santos Escobar and his goons Legado del Fantasma attack Kushida after his victory. But making the save is MSK, Wes Lee and Nash Carter, to even the odds. Here’s a crop of Cruiserweight contenders that could produce some great showings under the silver brand.

Backstage. Mercedes Martinez is wondering if NXT Women’s Champion Raquel Gonzalez is ducking her. Martinez also claims that Dakota Kai is ordering her around, and the former is willing to take her out.

It’s The Way again, and Indi Hartwell announces a future tag team match granted by General Manager William Regal. To give an update, Candice LeRae is alive but beaten.

Before Kyle O’Reilly makes his entrance, the NXT Champion Karrion Kross and Scarlett are watching near the curtains.

O’Reilly displays his grappling acumen over the “Burlington Billionaire” and targets the left arm throughout the opening goings. Grimes though reverses with a backflip and consecutive German before picture-in-picture where he continues applying pressure on the injured neck. Eventually, O’Reilly fights back and applies a guillotine, but Grimes regains control with a slam. They trade blows, and Grimes reverses his opponent’s signature rebound clothesline with his signature standing Spanish Fly. But the second closeline from O’Reilly connects, and the top-rope knee drop finishes the match.

No afterbirths were needed following a great main event. The lower third appears shortly after the bell rings, and O’Reilly stands tall to close tonight’s episode.

Kyle O’Reilly is clearly being built up as NXT’s next singles breakout star — or possibly Karrion Kross’ next meal. But like tonight, he’s got the wrestling ability to do so. The wrestling aspect of tonight’s card picked up gradually for an overall fun episode. Good matches, but The Way is starting to have go-aWay heat with me…