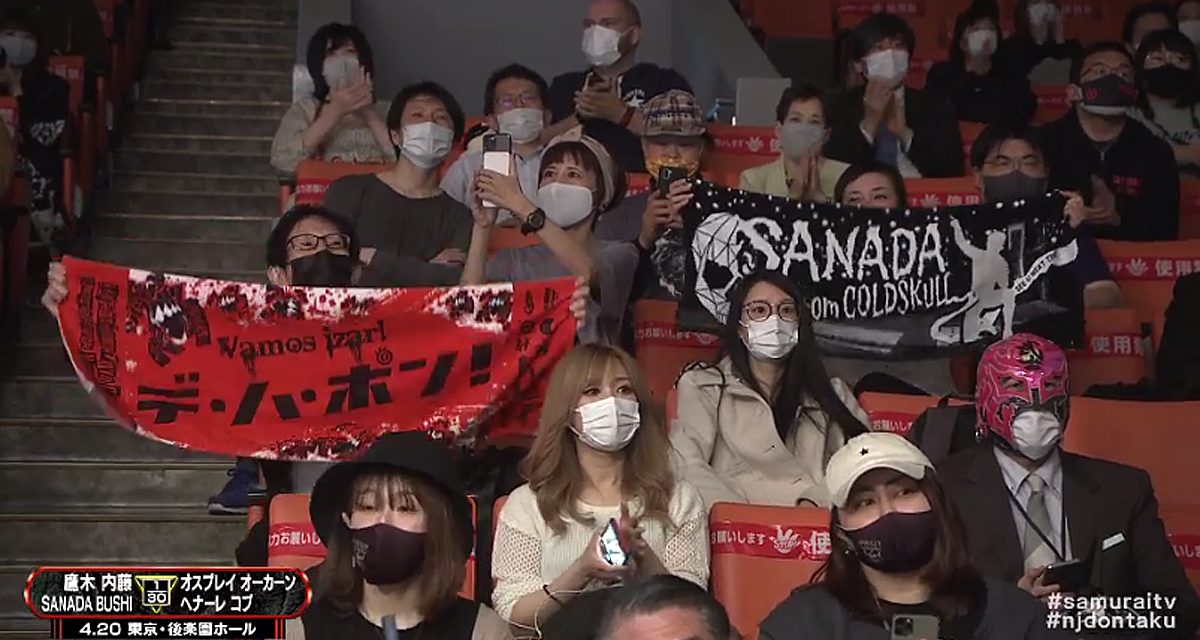 Chaos has held on to their six-man tag team gold. The NEVER Openweight Six Man Tag Team Champions (Hirooki Goto, Tomohiro Ishii and YOSHI-HASHI) defeated the Bullet Club team of Taiji Ishimori, KENTA and Yujiro Takahashi at Road to Wrestling Dontaku. The struggle for Yoshi-Hashi’s bo stick though stole the spotlight for much of the match.

The bo stick came into play as Yujiro held Red Shoes in a corner so Kenta could bring it into the ring. Kenta clobbered Ishii and Goto with it. Yoshi-Hashi saved Goto though from being pinned.  Red Shoes grabbed the bo stick trying to take it away from Kenta. Kenta shoved him out of the ring. Hashi disarmed Kenta and knocked Yujiro’s cane out of his hands with the bo stick.

Kenta and Yoshi-Hashi get into a tug of war over the stick. Hashi wins that contest braining Kenta with it then dropping it to the floor outside the ring. Goto avenges his embarrassing loss to Ishimori last night by pinning him with a GTR and a GTW so that Chaos continues to reign as the NEVER Openweight Six Man Tag Team Champions.

Kenta is more concerned about the bo stick than losing the match. He picks up the bo stick and hugs it. Yoshi-Hashi reaches over the ropes pulling it away from him. The crowd claps in approval as the bo stick is back with its rightful owner.

Looking ahead to their match for the tag belts, Suzuki-gun works over Yoh’s knee as often and as vicious as they can throughout the match. Honma and Suzuki get into a very hash palm strike contest. Their blows echo all around the arena. Ouch! Sho pins Kanemaru with a lariat and a Shock Arrow. 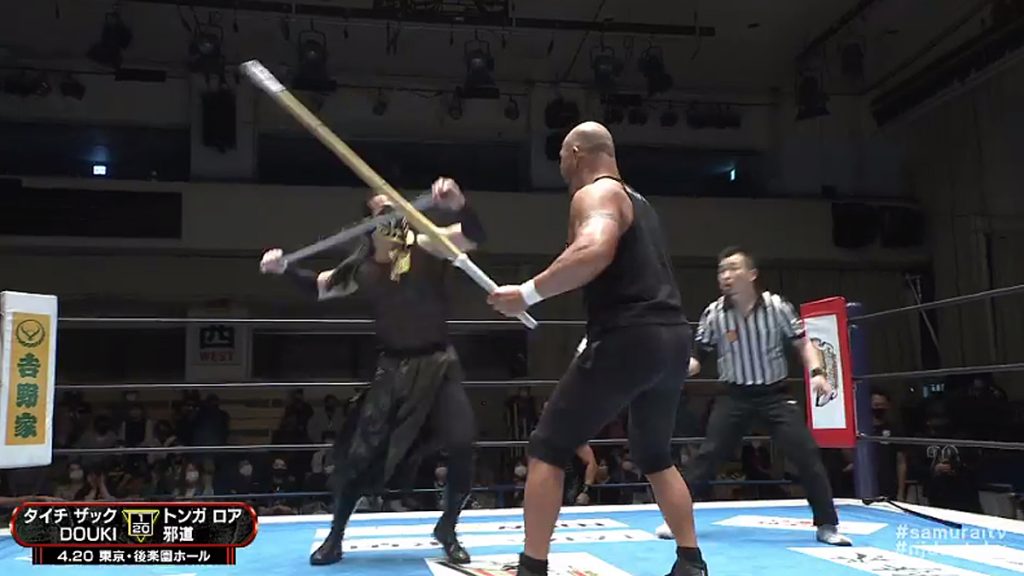 Douki and Jado duel in the middle of the ring. Courtesy: NJPW.

Douki hits Jado in the face numerous times with his steel pipe. He doesn’t get disqualified. Tonga lays out Taichi with one of the tag team belts. Loa reverses Zack’s Guillotine submission into the Ape S–t finisher for the victory. Jado whips Douki with his kendo stick. Loa: “Douki, stick your nose somewhere else. Zach, for the past few weeks you keep asking for a tag title shot. Well, Zach this is my answer to you. If you can beat me fair and square then you will have the opportunity to face me and Tama for those titles but if you lose to me you will never challenge us again.” Tonga and Loa then execute a Magic Killer on Taichi.

While the official tries to help the downed time keeper Evil chokes Yano with his own chair and Jado strangles The Ace. All heck breaks loose at the end of the match. Dick Togo enters the ring. Jado punches Tanahashi with his brass knuckles. The official has no choice but to throw the match out. Bullet Club puts the boots to Yano. Evil takes Yano’s KOPW trophy and spray paints it black. When Yano is revived he is distraught over what Evil has done. 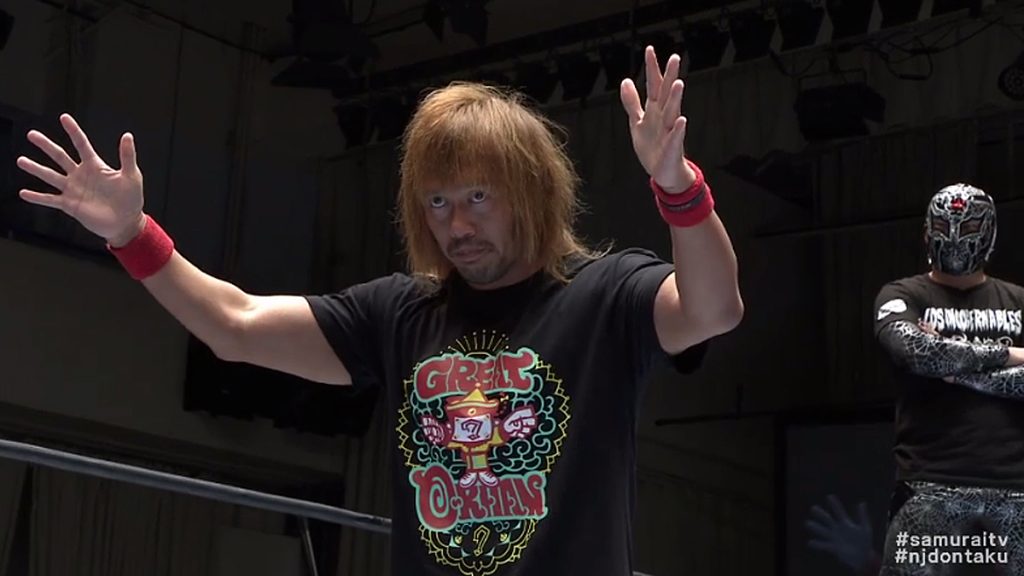 Naito is a fan of The Great-O-Khan’s. Courtesy: NJPW.

As Khan takes off his robe Naito has a little fun with him. Under his hoodie he has a Great-o-Khan t-shirt on. Bushi is the LIJ victim again. Khan puts him away with the Dominator. Shingo and Ospreay, Naito and Khan stare each other down.