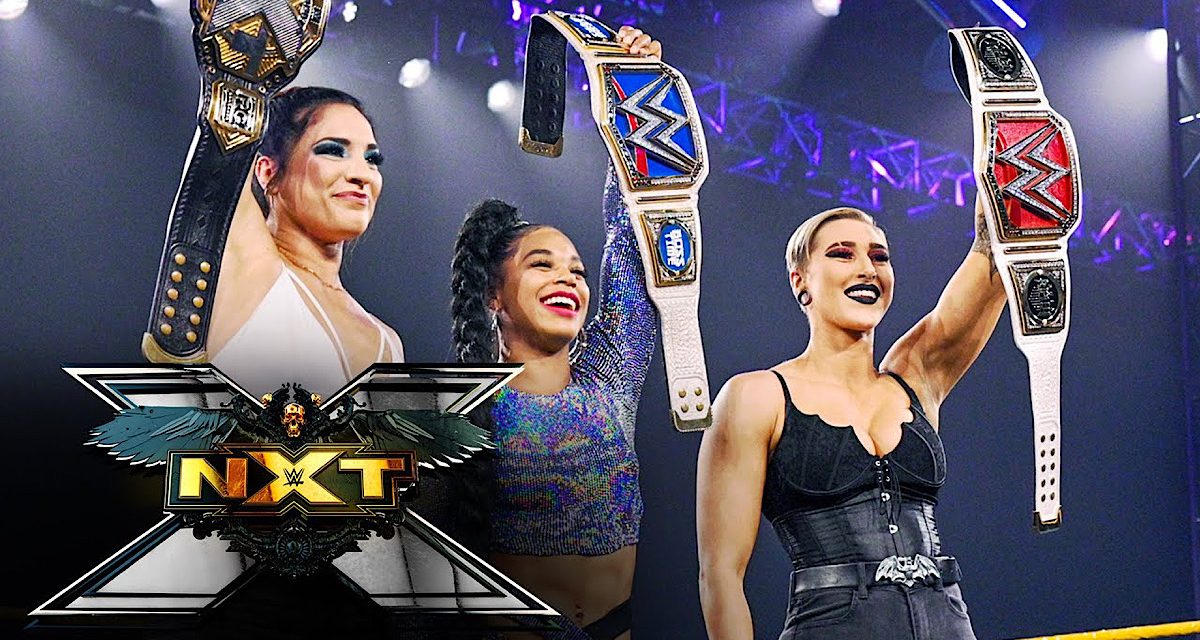 NXT TakeOver: Stand & Deliver was a huge highlight for the black-and-gold brand. In fact, it was apparently the most watched NXT TakeOver event ever as commentary repeatedly mentioned throughout the night. The fallout to this event presented a whole lotta new, from newly crowned champions to a new night in Tuesday!

The new two-time NXT Champion Karrion Kross opened tonight’s show accompanied by Scarlett. It was a familiar scene except fortunately without the dooming arm sling this time around. Kross praised the former champion Finn Balor and the entirety of NXT’s locker room, but he boldly reassured that “in the end, everyone pays the toll.” A similar post-win promo from Kross signified the relinquishment of his championship last year. Now injury free, this upcoming title reign will determine if NXT’s audience was either robbed or saved.

The challengers’ metal and whistle-pop entrance theme is pretty amusing, and they surprisingly take control in the opening minutes. Back from commercial, Nash Carter and Wes Lee make the comeback to vocal boos from the Capitol Wrestling Center. Is MSK getting turned on already? Maybe it’s the underwhelmingly bland display of character. Dain cleans house before accidentally slamming his partner, and Carter capitalizes with a springboard cutter. Shortly afterwards, the champions deliver their double-team finisher on Maverick for three. The crazy maneuvers — like Lee’s impressive spiral tap for example — need some unleashed “rascal” personas to complete the package, sooner rather than later.

Imperium assaults Dain with former tag partner Alexander Wolfe watching on. Dain has seemingly declined their invitation despite it being a beneficial pairing for him. And so the oddball-couple stuff with Maverick continues.

Earlier today, Robert Stone and Aliyah were tracked down by Mercedes Martinez in search of her payday. The Brand’s Jessi Kamea stepped in, issuing an in-ring challenge for tonight’s show.

Roderick Strong and his wife Marina Shafir are seen entering the building before a highlight package of Kyle O’Reilly and Adam Cole’s NXT TakeOver matchup plays. Extra footage captures O’Reilly and Cole being wheeled side-by-side in stretchers as the latter continues venting. What a shot!

Kamea jumpstarts the matchup with Stone and Aliyah cheering on ringside. She grounds the opposition before missing a crossbody and eating a jumping knee. Martinez subsequently hits the Air Raid Crash for three and charges at Stone ringside; ultimately, Stone loses a wad of cash. A richer Martinez screams at commentary, setting her intentions on new NXT Women’s Champion Raquel Gonzalez. She’s definitely a wanted woman now.

Backstage, The Way is in full force. They’ll compete in an eight-person mixed tag team match tonight, and they’re probably correct about being NXT’s best intergender faction considering there aren’t many others.

Isaiah “Swerve” Scott is in the studio discussing his highlight performance at NXT TakeOver. He vows to rid himself of Leon Ruff tonight.

The official and undisputed NXT Cruiserweight Champion Santos Escobar walks out with Legado del Fantasma. Right after completing the words “open challenge”, the aforementioned open challenge is accepted by Kushida. It should absolutely be noted that the challenger is wearing trunks for the first time in virtually forever.

The competitors commence in a quick back-and-forth with Kushida taking advantage with an arm twist. During picture-in-picture though, Escobar turns the tides and eventually Boston-crabs his opponent into the post. He connects with double-knees and a top-rope hurricanrana for two, but Kushida returns with a comeback. Kushida connects with a huge double-arm suplex from atop the ropes, attempts the Hoverboard Lock and enziguri before the competitors trade blows. The champion reverses a mid-air maneuver with a well-timed backstabber but cannot capitalize with the Phantom Driver. Instead, they exchange pinning attempts until Kushida gets the unexpected three! Kushida is the new NXT Cruiserweight Champion!

The brand-new NXT Cruiserweight Champion Kushida is met by Jordan Devlin in the trainer’s room. The ladder-match loser of NXT TakeOver cuts a good promo, claiming that both Escobar and Kushida were simply lucky.

With pyro, smoke and Dakota Kai surrounding her, the new NXT Women’s Champion Raquel Gonzalez makes her celebratory entrance. She thanks Kai for supporting her and gives respects to former champion Io Shirai before the lights go out. Franky Monet, the former Taya Valkyrie, appears onstage with dog in-hand. The women’s division has gotten “a little bit shinier, a little bit boujeer, and a whole lot better,” says Monet. The either newly-turned face or tweener in Gonzalez has the ultimate heel response by threatening to hurt Monet’s little dog by shoving it up there…

The surprises keep coming as both the RAW and Smackdown Women’s Champions Rhea Ripley and Bianca Belair join Gonzalez in-ring! They recreate an older photo of them together as NXT rookies, except now with championship gold all around. Belair ironically doesn’t “go here” anymore, but it’s certainly a feel-good moment.

Pete Dunne is focused on championship gold too. And that’s all from “the best technical wrestler in NXT” in this backstage promo.

“The Warrior of the Sun” Sarray has signed with NXT. General Manager William Regal and others sing her praises in a video package as she debuts next week. Later, Regal talks to Roderick Strong and Marina Shafir in his office. “I’m done,” says Strong. Strong and Shafir hand in their papers and leave NXT!

Ruff fights valiantly against his rival and targets the left shoulder, but Scott overcomes by reversing with a leg sweep preceding commercial. Ruff fires up, connects with a springboard cutter and outside dive, and finally delivers a top-rope dropkick for two. What Ruff lacks in size, he compensates for with energetic offense: the big top-rope hurricanrana for two, for example. They trade closelines and reversals until Scott delivers the nasty JML Driver for the decisive victory. These guys left it out there and impressed!

Backstage, Zoey Stark reflects on her NXT TakeOver pre-show victory before Mercedes Martinez interrupts. Who’s next in line for Raquel Gonzalez is the question.

WALTER is quite possibly sticking around in NXT US. Yes please and thanks! A vignette of Imperium confirms that their crusade continues.

The victorious Isaiah “Swerve” Scott is attacked by Leon Ruff. “It’s not over until I say it’s over,“ says Ruff.

Austin Theory tussles with his ex-kidnapper Lumis, but Indi Hartwell really wants in. Instead, the NXT Women’s Tag Team Champions beat down on Candice LeRae and even Johnny Gargano before Lumis steps in again. He romantically approaches Hartwell before they’re interrupted by both LeRae and picture-in-picture thankfully. “The Colossal” finally enters and single-handedly takes out Gargano and Theory until the women competitors get involved with a brawl. The action breaks loose as Reed tosses Blackheart onto the outside mass, and Lumis catches Gargano with a choke. Unable to attack her dream boy, Hartwell pretends to be knocked out which results in Lumis carrying her towards the back. Moon hits an assisted Eclipse on Theory, and it’s ultimately Reed’s Tsunami Splash that finishes things off. Messy, fun, chaotic — it’ll depend on one’s cup of tea. But the more-than-usual amount of intergender wrestling was a welcome addition to tonight’s show.

That’s a solid start to NXT’s weekly Tuesday goings. In some way, the vibe felt more relaxed since there’s a sense of relieved pressure now — which was made obvious by the looney main event. The standout part of tonight — and the brand in general — is the women’s division, which is only getting better from here.