Ospreay new champ and the Empire grows at Sakura Genesis 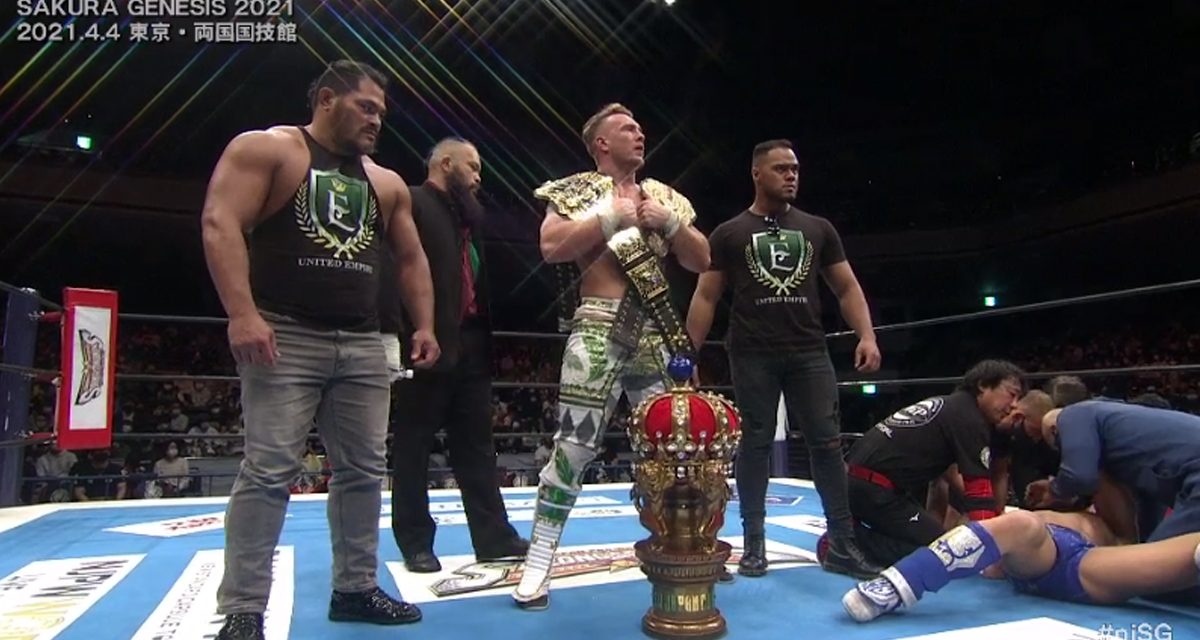 It was a banner day for the United Empire faction in NJPW. They not only gained a new member but their leader Will Ospreay won the IWGP World Heavyweight Champion at the Sakura Genesis event. Ospreay defeated Kota Ibushi in the very first title defense of the new belt. Ospreay was rewarded with the title match by winning the NJPW Cup tournament last month.

The match itself was a showcase of two of the very best wrestlers of their generation in one of the best matches of 2021. Ospreay paid for his slap across the face when Ibushi pitched him right out of the ring. Ibushi soared over the top rope with a plancha bowling Ospreay over. Ospreay crotched Ibushi on the top rope and kicked him in the face knocking him to the floor. Ospreay bent Ibushi’s neck backwards over a security railing. Ibushi turned things around by whipping Ospreay into the barricade. A backdrop from Ospreay on the barricade put out Ibushi’s fire though.

Ospreay landed a knee drop on the back of Ibushi’s neck as he lay prone on the apron. It took time for Ibushi to recover from that assault but he did with kicks and a drop kick off the ropes as the crowd started clapping for him in unison. 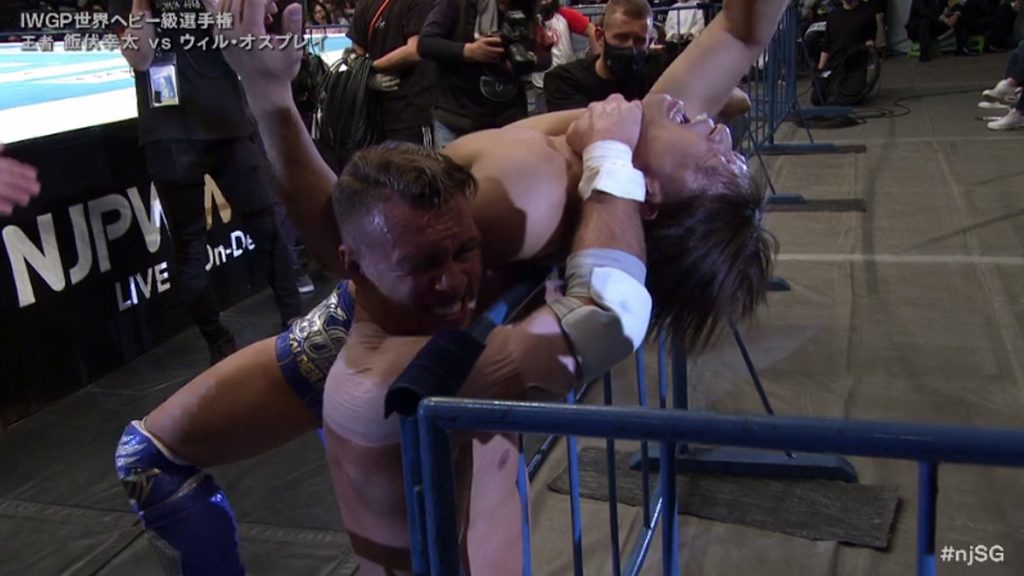 The two fought back on the top rope again. Ospreay countered a reverse hurricanrana by flipping and landing on his feet. Ibushi would kick out of an OsCutter. Ospreay would kick out of two Kamigoyes pinning Ibushi with a vicious running knee strike and a Stormbreaker to become the new IWGP World Heavyweight Champion.

“Get him out of here! I want to have my celebration speech!” growled Ospreay while the trainers and Young Lions helped Ibushi to the back.

“I still hear you laughing and doubting me. The British boy cannot be IWGP World Heavyweight Champion. Who is laughing now?” asked Ospreay smiling. 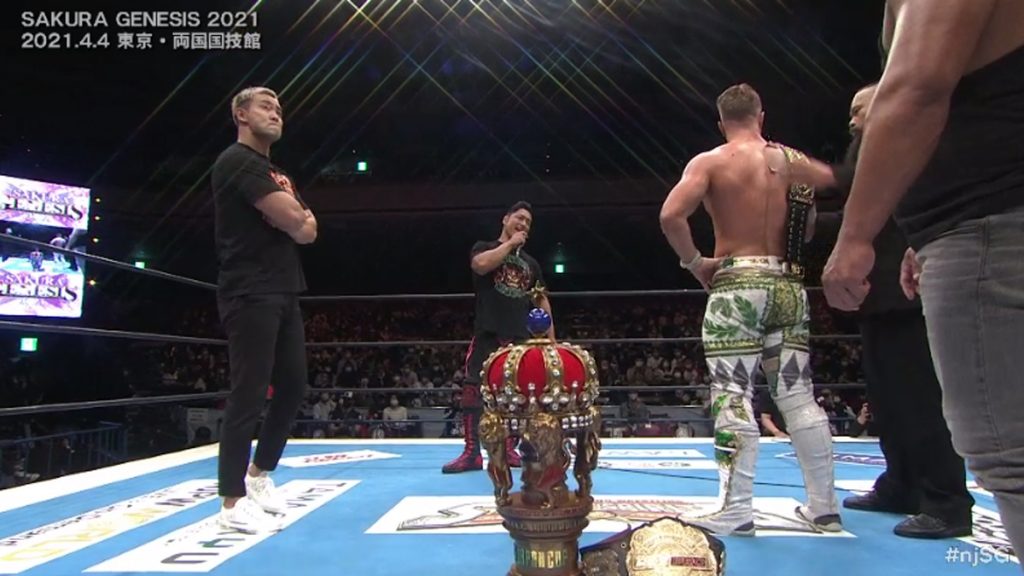 Ospreay has no time to celebrate. Courtesy: NJPW.

Ospreay may have already found his first challenger as it was Kazuchika Okada who came out to spoil Ospreay’s celebration but before he could say a word Shingo Takagi took the microphone away. Takagi was quick to point out that Okada lost to Takagi in the first round of the New Japan Cup and that he deserves a shot at the belt before him.

“I am going to beat this piece of crap for the title and then you get a shot against me,” Takagi promised Okada.

“First Shingo and then I am coming for you!” said Ospreay to Okada. 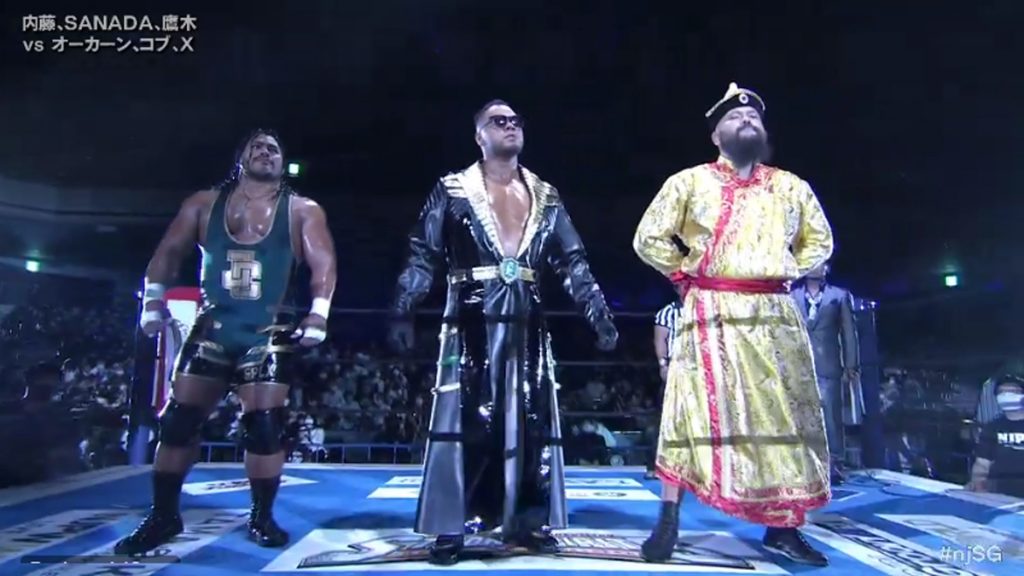 In other United Empire news out of Genesis there is no Toa Henare any more. Toa is now Aaron Henare, the Ultimate Weapon and the newest member of the United Empire. Henare scored the win for his new allies by pinning Sanada with a Death Valley Driver in United Empire’s match against Los Ingobernables de Japón. Putting Sanada away wasn’t enough for Henare though. He laid in a flurry of punches as well. He and Cobb held down Naito as The Great-O-Khan smashed his knee with a steel chair to add insult to injury.

In his return match since being sidelined with a torn ACL last year Yoh and his Roppongi 3K partner Sho became the IWGP Junior Heavyweight Tag Team Champions for the fifth time by defeating Yoshinobu Kanemaru and El Desperado. Yoh had a new look and Roppongi 3K had new music heading into the match.

Roppongi 3K spiked Kanemaru with Strong X (a Shock Arrow from Sho and a top rope stomp by Yoh). Desperado had to make the save. Yoh put away Kanemaru though with his new finishing move capturing the belts for Roppongi 3K. Yoh broke down and cried when he and Sho were awarded with the title belts.

A preview perhaps of Sabre Jr. and Taichi challenging Loa and Tonga for the tag belts. Loa holds Douki in the air for what seems like an full minute before suplexing him to the canvass. The official cuts Jado off from using his kendo stick. Tonga retrieves Taichi’s Iron Glove hitting Douki with it. Taichi kicks Tonga in the stomach to reclaim it. Taichi punches Jado in the face with the Iron Glove but eats a boot from Tanga Loa. Sabre Jr. pins Loa with a bridging roll-up giving Dangerous Tekkers a victory over the champions. The official hands the Iron Glove to New Japan Pro-Wrestling Chairman Naoki Sugabayashi who refuses to give it back to Taichi. Taichi is confused and angry.

Kenta still has possession of Yoshi-Hashi’s bo staff. Dick Togo receives a Demolition-like beatdown in the middle of the ring from everyone in Chaos. The official prevents Kenta from bringing the bo stick into play. Yoshi-Hashi takes it and rolls it into the Chaos corner for safe keeping. Bullet Club evens the score as all five of them batter Toru Yano in a corner. Yano kicks both Togo and Evil in the “lower abdomen”. He then pulls a hood out of his shorts, puts it over Togo’s head and pins him. Everything is right in Yoshi-Hashi’s world as he has his bo stick again. The NEVER Openweight 6-Man Tag Team Champions (Hashi, Ishii and Goto) challenge Kenta, Ishimori and Yujiro by showing off their shiny title belts to them.

Winners: The United Empire (Henare, Jeff Cobb and The Great-O-Khan)

White mocks Tanahashi for not agreeing to give him a Never Openweight Championship match. Kojima knocks Fale senseless with his Lariat. Tanahashi pins him with a High Fly Flow. As White sneaks in for an attack, The Ace catches him putting him in a Clover Leaf Submission. Tanahashi accepts White’s challenge renaming his submission hold the JTO: Jay Taps Out.

A historic event that gave us a look into what NJPW has planned for the spring and summer of 2021. A phenomenal main event, lots of intrigue and a flawless undercard.