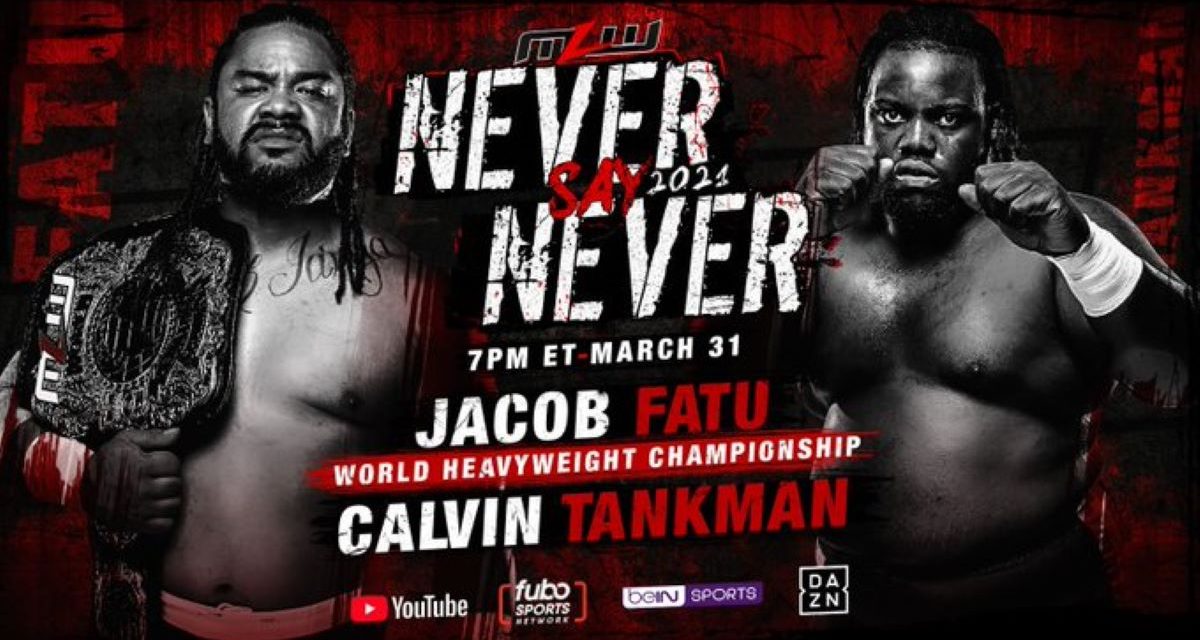 Will Calvin Tankman be able to take on the Jacob Fatu in securing the MLW heavyweight championship?  Will Injustice finally get justice over Contra Unit?  Like the marquee says:  Never say never.

We are live from the GILT Nightclub in Orlando, FL. Your commentators Rich Bocchini and “fight analyst” St. Laurent have the call, along with Ray Flores.  Yep, That Ray Flores , folks, which adds for a big night.  Who’s going to get the wins tonight?  Let’s send it to the ring for your First Match… 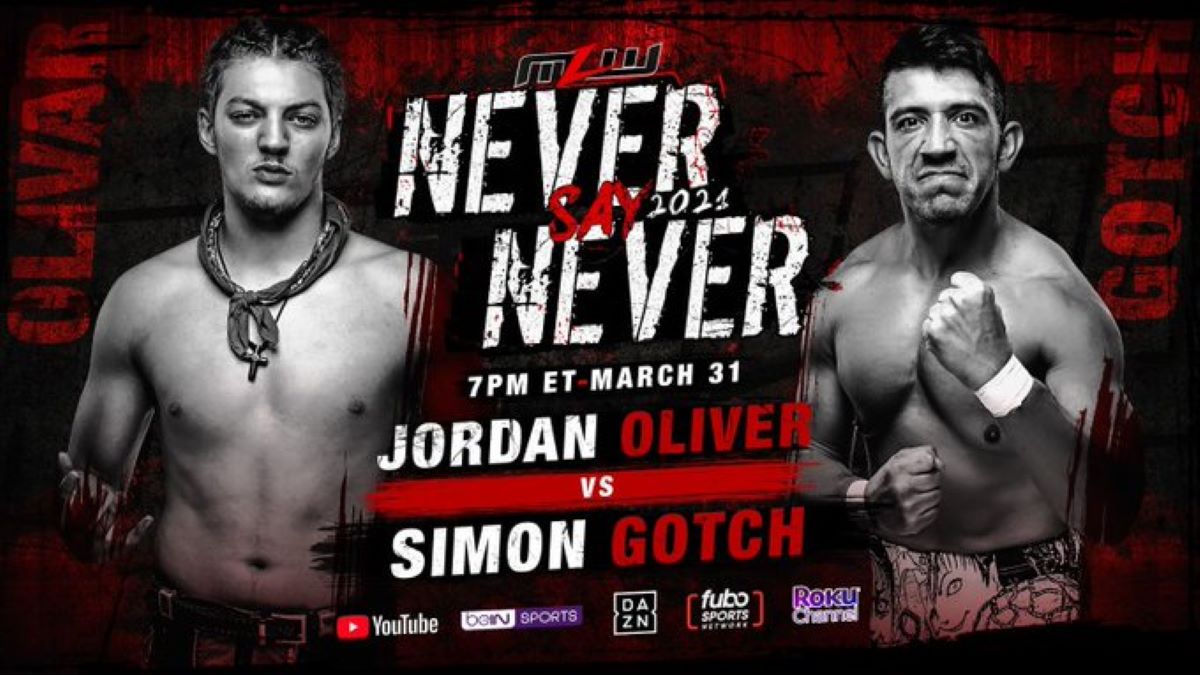 Lot of history and bad blood between the two since the start of last summer, and their feud has yet to simmer.  Oliver enters favoring his back, and that can’t be a good sign.  Bell rings, and both combatants show their technical prowess, but it’s Gotch isolating the leg/knees of Oliver.  Gotch is really getting in his offense with not only a chin lock to Oliver to wear him down early in match, but a unique stretch/leg grapevine (almost a Koji Clutch) by Gotch, but the lanky Injustice member is able to squirm out.  Oliver tries to get Gotch with his springboard cutter, but Gotch with an elbow to Oliver’s already hurting back.  Gotch goes back to grinding down Oliver, even at one point Uses Oliver’s bandana to choke him out at points.  Oliver goes back on the attack, and unloads with elbows, but Gotch knocks him back don and covers for a count of two.

Gotch continues his assault on Oliver’s lower back with knee strikes, and the pain is now etched on Oliver’s face.  Gotch in full control, knocks Oliver to the point his eyes are Krispy Kreme’d (read:  very glazed).  Gotch attempts to finish it off with the Gotch Driver, but Oliver counters with a desperation DDT.  From there, Oliver gets a snapmare, and now hits a Clout cutter, and gets the win.

Your Winner via Pinfall:  Jordan Oliver

So far, Injustice is 1- 0 over Contra unit.  Wonder how the Rent-a-Cobra Commander, Josef Samae, is gonna take it?

Well, speak of the devil (literally), because Josef Samael is tired of Injustice and their “revolution”. He reminds us it’s a war, and that they train in the Killing Fields of Cambodia. Fatu is ready, and will bring destruction tonight. Hail Contra.

We now head to the second match, and let’s see if Injustice will make it 2-0 tonight. 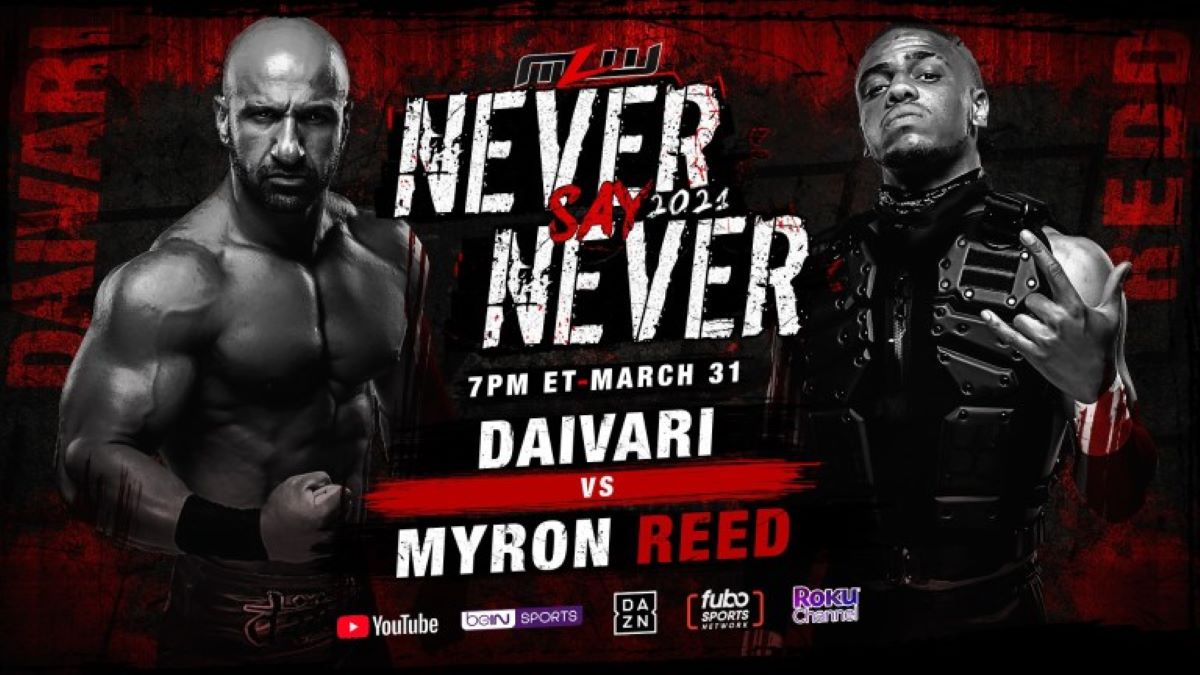 Daivari enters with a tank top and dark pants, and I’m starting to wonder if this will be a no holds barred matched.  Well, in any case, it’s a slugfest to start, but Daivari takes early control.  Daivari almost has the young GOAT dazed, but a suicide dive to Daivari on outside gets the Louisville Highlight back in the driver’s seat.  Reed pummels Daivari on outside, and goes for a whip, but Daivari reverses Reed back first to the soundboard.  Reed has on the chest protector, but there’s no protection for his back, and Daivari takes full advantage of that fact.  Daivari sends Reed in the ring and chokes away.  Reed gets slammed to the corner turnbuckle and Daivari covers Reed for a two count.  Back outside the ring, Daivari goes for a piledriver, but it’s reversed into a suplex by Reed, followed by a cross body.  Reed sends Daivari in the ring for a springboard splash, but crashes and burns as Daivari moves away.

It looks like Reed injured his ankle, and Daivari smells the blood in the water, slapping on a figure four (Woo!), but Reed grabs the ropes to break the hold.  Daivari goes for a suplex, but gets reversed to a chin breaker/Ace Crusher by the young GOAT, and now Reed gets full steam going as he hits a big boot to Daivari, followed by a couple guillotine leg drops for a cover, but gets a two count for Reed.  Reed sends Daivari to the corner turnbuckle, but Daivari counters to a powerslam to cover, but it’s a two count for the Iranian super soldier of Contra.  Now Daivari takes off Reed’s chest protector and hits a bodyslam on Reed.  Wanting to add insult to injury, he goes up top by Daivari for a splash, but misses the mark.  Reed his springboard cutter to knock out Daivari, and takes the chest protector back.  He goes outside, buckles in the protector, and delivers a 450 Splash for the three count.

Your Winner via Pinfall:  Myron Reed

We also get a tweet by Azteca Underground, just poking at that fact that Hammerstone doesn’t have the MLW Openweight title:

This now resides in MY temple! @alexhammerstone there is a new El Jefe in town!!! 🗝️ pic.twitter.com/euLitqySCm

Naturally, Your Boy Hammer ain’t too pleased with this, and can’t wait to send Mil Muertes back to whatever grave he crawled out of.

Next week is MLW Underground, then on April 14, Hammerstone challenges Mil Muertes for the MLW Openweight championship

Now it’s time for The Interview Queen Alicia Atout, with Richard Holliday and Gino Medina, in the most uncomfortable Zoom meeting ever. Holliday and Atout bicker, and even Medina is tired of the thirsting. Medina says he’s not dealing with the “Brunette Barbie and Thrift store Ken.” Alicia is also tired of this, and let’s both men know in two weeks a title match is set between Medina and Holliday for the IWA Caribbean Title.  Suddenly, I realize my MS Teams meetings aren’t so bad compared to that.

Bu Ku Dao has been out with an injury and TJP was fined $2500 and suspended from MLW.  We’ll get an update in two weeks on the prognosis of Bu Ku Dao.

Before we get to that, it’s time for the Tale of the Tape:

Got it?  Good.  because now it’s time for the Main Event…

Both men are evenly matched up, and both looking ready to make their mark.  Collar and elbow tie up to a draw for both men, testing each other’s strength.  Tankman gets a shoulder block on Fatu to send him on the outside.  Fatu ain’t having none of that, and he gets fired up and chops Tankman in the corner.  .  Tankman really showcases his athleticism with an arm drag and leaping leg strike to send Fatu out of the ring again. Tankman still has that Heavyweight Hustle going, and it impresses me every day that for a man of his size that he moves like a cruiserweight.  It’s really a lot like looking at a latter-day Bam Bam Bigelow…but I digress.

Tankman tries to capitalize but a head butt by the current champ, and a cross body by Fatu shows he’s no slouch either.  Fatu keeps up the offense with a superkick to Tankman, and more head butts to knock the Heavyweight Hustle loopy.  He tries to get back his momentum, but it’s slowed by a Samoan Drop from Fatu.  He then proceeds to choke Tankman with the middle rope (and some wrist tape) leaving Tankman gasping in the corner.  Fatu then nails a corner cannonball in the bottom turnbuckle to Tankman, and wears him down with a nerve hold.  Tankman tries to chop his way out, and Fatu sends back down with back elbow.  But the Heavyweight Hustle will not be denied, and we have a slugfest with the two behemoths and, and Tankman hits the Pounce to send Fatu out the ring, and he follows his quarry outside with a suicide dive.  Tankman gets Fatu back in the ring, and he delivers an amazing standing shooting star press that has to be seen to be believed.  But, it’s only good for a two count.  Tankman then goes for a cutter, but Fatu slips out, and superkicks Tankman down.  Fatu with a rope assisted moonsault for a cover of two, and now the champ is showing signs of frustration for not being able to put the young challenger away.  Now Tankman gets back on his feet to deliver a back fist, and a vicious clothesline that turns the champ inside out.  Tankman covers for the one two…kick out by Fatu, and Tankman can’t believe it!  At that point, Daivari interferes and Tankman gives him a back fist for sticking his nose in the match. As the ref tends to Daivari and make sure he’s out of the ring, Fatu grabs the black flag of Contra with a pole and rams it in Tankman head. Tankman knocked down to the mat, Fatu hits his BME and ref then is in position to count one, two, and three!

End have Contra Unit celebrating their win, while Tankman still lay crumpled in the middle of the ring.   Can anyone stop the carnage caused by Jacob Fatu?  Guess we’ll have to find out another day, as the show fades to black.

Another solid show from top to bottom.  It’s always great when all the competitors are firing on all cylinders, and this momentum will definitely propel MLW during the spring/summer months.  The big treats were not only finding out that Dragongate will be joining forces with MLW soon, but seeing Tankman with Jacob Fatu is a good match that foretells bigger things down the road for the Heavyweight Hustle.

Seriously, do not sleep on this super heavyweight.  He is a man worth watching in the future.

Since MLW will have their Underground shows next week (and there’s some sort of Mania event going on next week), we’ll see you on April 14th.  Prepare your taxes!