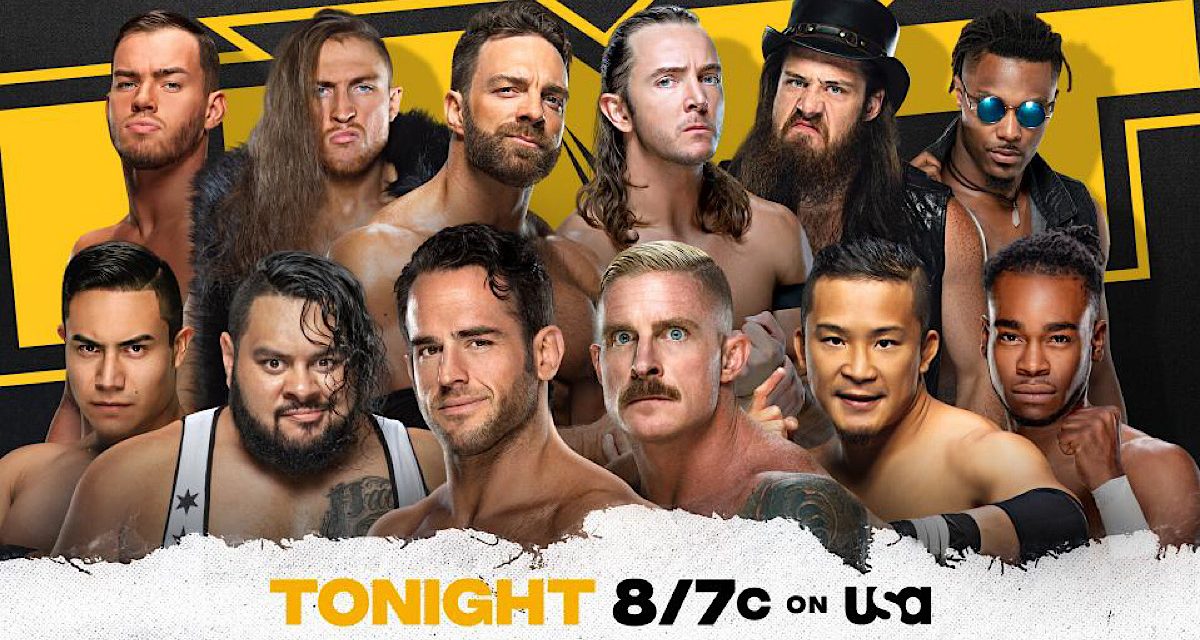 It has become a yearly tradition for NXT TakeOver to take over WrestleMania weekend, but like the previous year, 2021 is a little unorthodox. In the following WrestleMania week, NXT TakeOver will cover two nights with Stand & Deliver on April 7th and 8th on the USA Network and Peacock respectively. With loaded cards for both nights, the buildup needed to be loaded too. From great video packages to a wild battle royal, the precursor to TakeOver had a mighty task, and it didn’t disappoint.

Seeing what’s in store for newfound singles wrestler Strong will be interesting. His second obstacle is the eccentric richman, who still insists on reviving the Undisputed ERA with a new slogan: “Grimes the system.” The competitors tussle, and Strong delivers his signature stiff chops and dropkicks. Before picture-in-picture, Strong gets distracted by a ringside fan wearing a UE t-shirt which gives Grimes the upper hand. The opposition fights to reverse the momentum and eventually hits a superplex for two. After hitting a forearm chain and suplex, Strong finds a UE armband in Grimes’ trunks, once again letting the latter capitalize with the finishing Cave In. Despite the frustrating head-game antics, Strong and Grimes put forth a great opener.

For Night 1, the expected showstealer should be Tommaso Ciampa vs NXTUK Champion WALTER. The latter expresses his dominance in another package.

Interim Cruiserweight Champion Escobar issues an open challenge with half of Breezango, Tyler Breeze, coming out to accept. Escobar looks to finish things early, but Breeze fights back with two dropkicks. He takes out Joaquin Wilde and Raul Mendoza ringside before commercial. Escobar apparently had control throughout the break, but Breeze again fights back with frankly unimpressive offense. The champion breaks free from a Sharpshooter and subsequent Unprettier but delivers the finishing Phantom Driver for three.

Footage from last week sees NXT Champion Io Shirai at the trainers. The interviewer asks if Raquel Gonzalez is more than she can chew, but the champion says, “That’s why I picked her.”

This match is notable for being Gigi Dolin’s (formerly known as Priscilla Kelly) NXT TV debut. Otherwise, it probably wouldn’t be notable. Hartwell takes control over Dolin in the opening minutes, but the latter makes the “hot tag” to Ramier who delivers some odd-looking strikes. LeRae hits the Wicked Stepsister, and Hartwell delivers a nice springboard elbow for the victory.

Before the upcoming matchup, Io Shirai attacks Raquel Gonzalez but gets floored. Not a smart move, champ!

Here’s a preview of NXT’s future women’s division stars. Stark’s intensity is outmatched by Gonzalez’s power tonight, but the latter eventually gets thrown into the post. Kai attacks ringside, but Stark closelines her over the barricade. She delivers a spinning top-rope hangover for two, but Gonzalez halts the momentum with a finishing slam. Afterwards, Shirai returns for more, but Gonzalez tosses her into the barricade. Gonzalez for NXT Women’s Champion! Next Wednesday, they’ll close the show at TakeOver Night 1.

Kushida’s backstage promo is interrupted by Pete Dunne. They have some arguments over who’s truly the best technical wrestler in NXT. Flip a coin, boys.

Usually, NXT’s Prime Target video packages really help sell a TakeOver feud. This time, the given story is epic enough. Kyle O’Reilly versus Adam Cole is previewed in an extremely well put together package — one that could pass as a mini-documentary.

The mysterious Ying is supposed to debut tonight, but Li goes it alone. As Ying sits onstage, Li is pummeled by her former friends Carter and Catanzaro. The latter hits a cool twisting Codebreaker as Carter mindlessly decides to instigate trouble ringside; the throned figure chokes Carter out with one hand. Meanwhile, Li hits a jumping knee and tornado kick on Catanzaro for three. The Tian Sha storyline has run its course, and it’s practically just starting.

The women’s spotlight continues as an unnamed signee is scheduled to appear on April 13th. Throughout this episode, a small dog has been followed into the Capitol Wrestling Center, which reasonably correlates to Taya Valkyrie’s gimmick. “See you April 13th – Franky,” reads the graphic to commentator Vic Joseph’s astonishment.

Tommaso Ciampa has words for WALTER after getting his necklace ripped last week. For Ciampa, that necklace represents his family and his supporters — a consequential shift in motivation as WALTER claimed. They battle on TakeOver Night 1 for the NXTUK Championship.

What’s a TakeOver buildup without a brooding backstage promo from NXT Champion Finn Balor? Capping off both nights of TakeOver: Stand & Deliver, he’ll defend against Karrion Kross in the main event of Night 2. Well, they better deliver considering the show-stealing contenders before them.

In-ring, commentator Wade Barrett says that the Gauntlet Eliminator Qualifying Battle Royal rules are “incredibly simple.” He states, “11 superstars are gonna start off in this ring. The final six who are left in the match will all qualify for Night 1 of NXT TakeOver: Stand & Deliver next Wednesday in our Gauntlet match.” Vic Joseph adds, “Their order of elimination tonight will actually take part in their entry in the Elimination match… the man who wins the battle royal will enter the Gauntlet match last.” Thanks, Wade Barrett. How incredibly simple.

After a literal slideshow of rules and stipulations, Isaiah “Swerve” Scott enters first. He’s attacked ringside by rival Leon Ruff before commercial. All the competitors are present after break — Dexter Lumis physically, maybe not mentally as he stands idly in the corner. Jake Atlas is eliminated with ringside distraction by Malcolm Bivens, whose associate Tyler Rust is thrown out next. Austin Theory is knocked to the ground but saves himself by doing a kip-up… wait a minute. Ah, he’s eliminated too. Technicians Dunne and Kushida go back and forth, ultimately eliminating themselves by refusing to break an armbar. The six gauntlet competitors have been decided as the broadcast heads into picture-in-picture.

Meanwhile, Lumis hasn’t been touched. If he becomes victorious this way, the battle royal and its stipulations are all worth it. Also, commentators announce Pete Dunne versus Kushida for TakeOver Night 1. Bronson Reed eliminates Ruff and Scott, and they’ll subsequently begin the gauntlet next week. Lumis finally moves to help LA Knight and Cameron Grimes tip over Reed — the third entry. Despite offering cash, Grimes is eliminated next as Knight and Lumis square off. The latter saves himself on the apron, Knight moves through the middle rope and pulls the opposition to the floor. Knight is victorious and will enter the Gauntlet match last!

With so many matches to build towards, you can’t ask for much more from NXT tonight. The biggest drawing cards were taken care of with great video packages — which is obviously a strong point for the promotion. And while I could always do without filler matches, they were thankfully short and sweet.