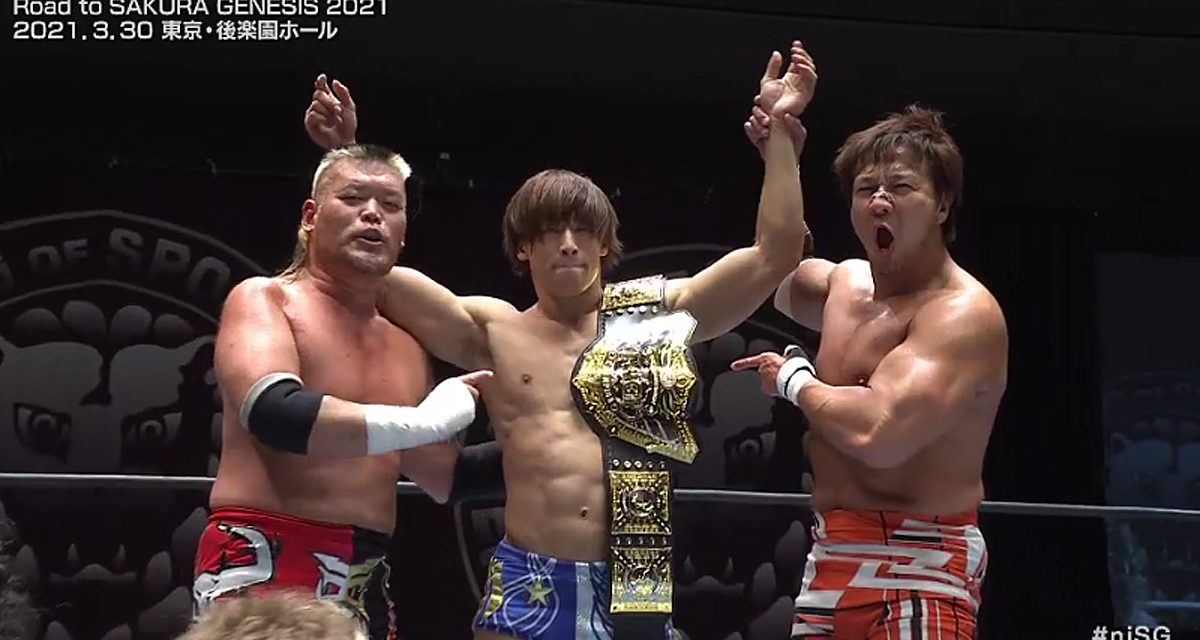 For one, the normally ground Sho lost his ever-loving mind in Chaos’ tag team match against Suzuki-gun. Sho was uncontrollable for most of the bout. Even his own teammates could barely rein him in. He beat down Desperado so badly in one corner that the official had to step in as one half of the IWGP Junior Heavyweight Tag Team Champions could barely stand or continue the match. More on that in the Results below.

Kenta continued to play a game of Keep Away with Yoshi-Hashi. Although Hashi regained his bo stick that Kenta stole last night, it eventually found its way back to Kenta who used it to bash and smash Chaos. Again, more on that below.

In the main event it was Satoshi Kojima, Hiroyoshi Tenzan and Kota Ibushi joining forces against The United Empire in The Great-O-Khan, Jeff Cobb and Will Ospreay. Like Night One, this was a roundabout preview for the IWGP World Heavyweight Championship match between Ospreay and Ibushi at Sakura Genesis.

Just as they did last night, Ospreay and Ibushi began the match with Ibushi gaining the upper-hand by countering Ospreay’s offense. Ibushi and Ospreay wouldn’t lay hands on each other until later in the match. Ibushi matched Ospreay’s quickness and came close to pinning him with standing moonsault. A Pip Pip Cheerio from Ospreay almost pinned Ibushi. Ibushi countered a hook kick with a clothesline. As Ospreay leapt onto the top rope Ibushi crotched and hung him on the Tree of Woe. Ibushi hit the prone Ospreay with kick after kick. Cobb spun Ibushi around for a Tour of the Islands. Ibushi snuck out of it kicking Cobb in the head. Kojima and Tenzan held Ospreay in the Tree of Woe as Ibushi gave Cobb a Kamigoye for the win. Ospreay and Ibushi went nose-to-nose before they went their separate ways. 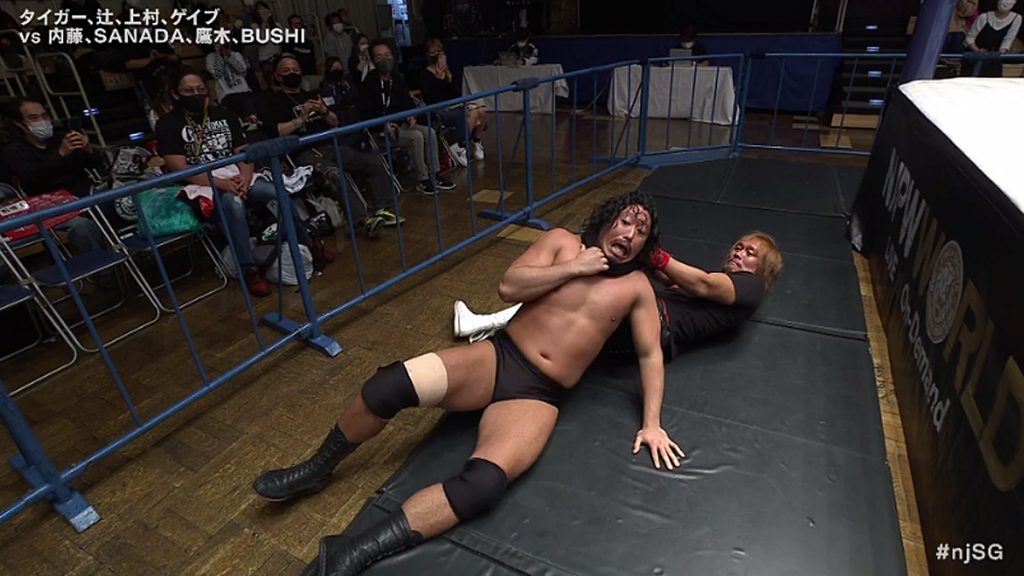 Just like last night, Naito goes beserk on Tsuji for some reason. As LIJ jump starts the match he strangles him on the floor with his shirt. LIJ are the winners with Naito making Tsuji submit to the Boston Crab. Naito tries to put the official in the crab as well but Uemura saves him.

Perhaps showing Suzuki-gun how serious he and Yoh are about recapturing the tag belts, Sho beats on Desperado until he is out on the mat. When the official tries to step between them a furious Sho shoves him off. Taguchi rushes over to lend a hand in stopping Sho. Sho pushes him away as well. Sho continues to stomp on a clearly unconscious Desperado. Taguchi and Master Wato hold Sho back in their tag corner. Desperado manages to snap out of it and kick out of a Wato pin. Desperado refuses to throw in the towel although he has to use the ropes to remain on his feet. Douki and Kanemaru take the fight to the floor to give him time to recover. He eventually tags Douki into the match and just rolls to the arena floor. Sho leaves his corner and he and Desperado get into slugfest. Sho ducks back into the ring cornering Kanemaru until the official corrals him once again telling him to get back to his tag corner as he is not the legal man.

While Sho and Douki tussle as legal men in the match, Desperado spears Sho and begins labeling him with punches. Wato dives into the ring to stop Douki from using his steel pipe on Sho. Sho pins Douki with Shock Arrow and then taunts the IWGP Junior Heavyweight Tag Team Champions with the belts. 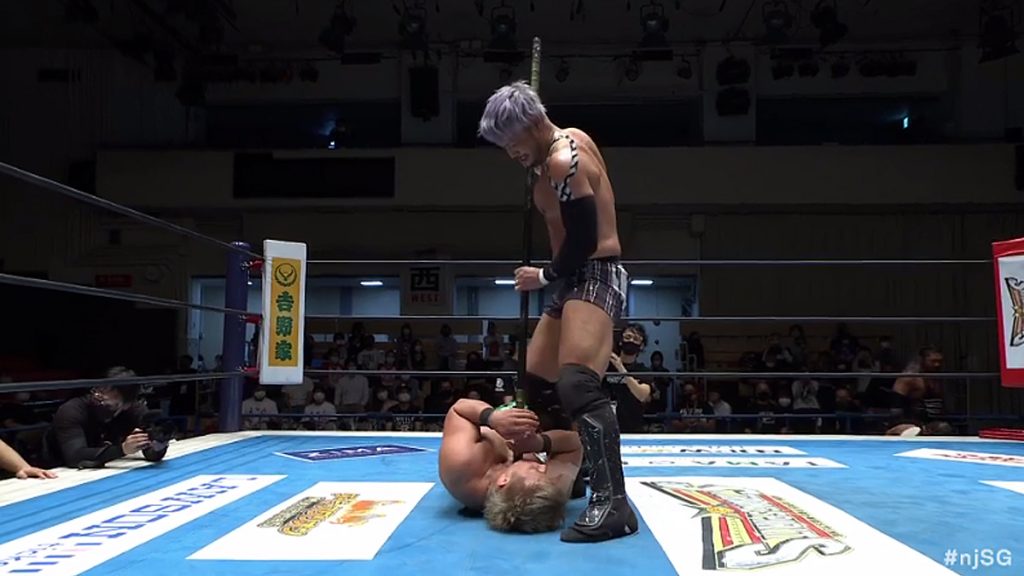 Kenta works over Yoshi-Hashi with his own bo stick. Courtesy: NJPW.

Kenta still has Yoshi-Hashi’s bo stick which he stole on night one. Yano calls out Evil to start the match. Before they can lock up, the lights go out. When they came back on all of Chaos except for Yano are on the floor hurt. Bullet Club swarms Yano in the ring. Yano attempts to rip off a turnbuckle but Dick Togo punches him in the head. Later, Chaos tries to beat down Fale but he just punches his way out of the swarming. Okada pulls an impressive feat of strength by body slamming Fale. Yoshi-Hashi kicks the bo stick out of Kenta’s hands. The official takes the stick away from Yoshi before he can use it on Kenta but Yujiro sneaks into the ring blasting Yoshi in the head with his cane. Yoshi submits to Kenta’s Game Over. Kenta retrieves the bo staff and chokes out Yoshi and Goto with it. He walks off the bo stick once again.

Not much to note here except White makes Honma submit to his new move which is like a reverse figure four of sorts. White calls it an “HTO”. White challenges Tanahashi to a NEVER Openweight Championship match. Tanahashi declines. White beats Honma with Jado’s kendo stick saying Tanahashi needs to apologize to Honma because the beating is all the Ace’s fault.