Quest for ‘The Crusher’ by the Novas 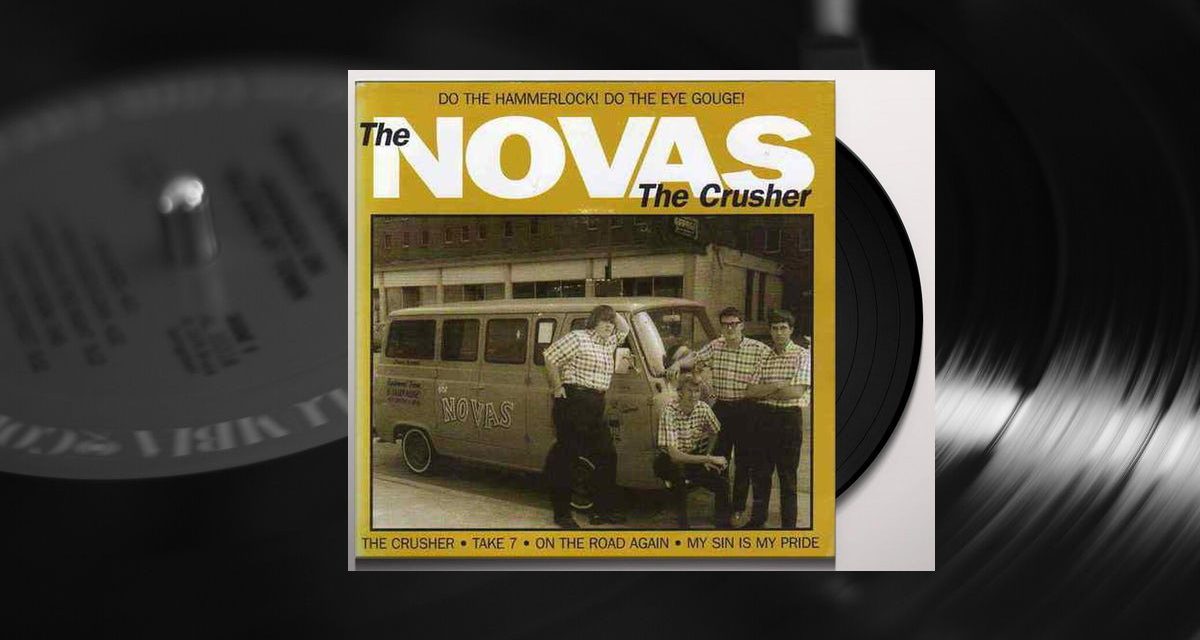 By Christopher Annino and Steve Prescott – For SlamWrestling.net

One of my favorite novelty songs is “The Crusher” by The Novas. It is catchy and it is about wrestling.

Trying to write about it ended up being a rather interesting journey. If I am, humbly, Don Quixote in this quest, then my Sancho Panza was Steve Prescott, the music critic for the New England Music Hall of Fame.

We hope you enjoy our “Quest for The Crusher,” broken up into two parts.

At a young age I always was intrigued by the Dr. Demento radio show which was the only platform to allow such great hit songs like “Pencil Neck Geek” By Classy Freddy Blassie and it helped boost Grammy Award winning Weird Al Yankovic’s career. This helped create the obsession I have for bizarre novelty songs that would never be allowed on mainstream.

I first came across this song when I was about 20 years old. At the time I was hanging out in Danielson, Conn., with Ox Baker, who was trying to train me in pro wrestling. We would go to some barn and pretty much get the snot knocked out of us for three hours. We didn’t complain though, and we had fun; come to think of it, we really didn’t train, we just thought we were wrestling. With his big bellowing bass voice, Ox would hold court and teach us about the psychology of wrestling, but really he was telling us stories of the wrestlers he knew. He sometimes would repeat those same stories but we didn’t mind, and absorbed the knowledge like a sponge.

One day he took me to the side and wanted to go over my “gimmick,” my character in the ring. At the time I was lifting a lot and competing in powerlifting, and my specialty was the bench bench press. Ox pulled out an old cassette tape and put it in his ’80s-era boom box with one speaker that was blown. The scratchy edgy screaming vocals and lyrics got my attention.

The song was “The Crusher” by The Novas. However, Ox thought it was “Hells Bells” by AC/DC because that is what was written on the blank tape box. He stopped the song mid-way and yelled, “That’s the song you are going to walk out to as… Monster Morgan!” 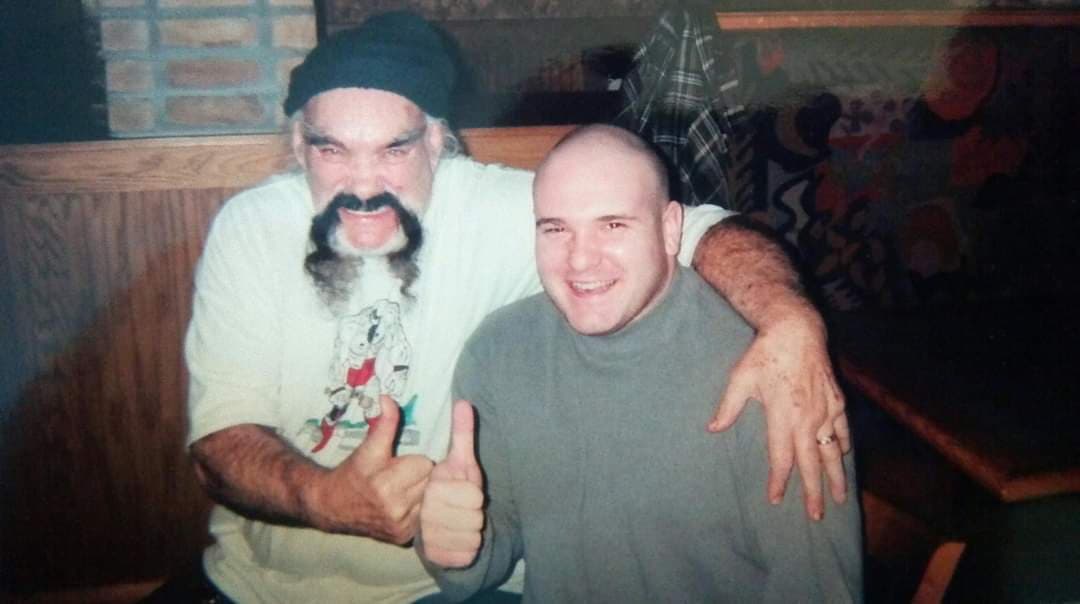 I respectfully declined to both being called Monster Morgan and walking out to that song. My in-ring career, further trained as I was by Pro Wrestling Hall of Famer Susan “Tex” Green, didn’t last that long, but “The Crusher” stuck with me.

The lyrics reminded me of a time when a wrestler was a real bad-ass tough guy. Names like Frank Gotch, The Great Gama, Lou Thesz, Johnny Valentine, Stu Hart, Verne Gagne, Danny Hodge, and Bruno Sammartino were carved out of granite.

And the sound! The lead singer had heavy metal-like vocal chords, holy Christmas! 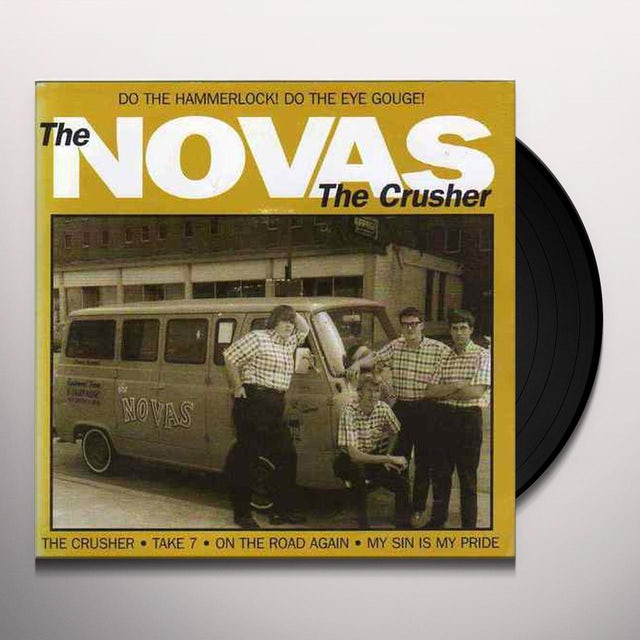 As great as the song is, I had not thought about it for a while, until I was sent a YouTube clip. It was like discovering a long-lost forgotten treasure — or a fountain of youth.

Hearing it again brought back feelings and memories from a younger time, to the point I found myself reflecting on my life, back to those days where everything seemed more edgy, extreme and hardcore but fun, like Monday Night Raw, playing Man Hunt and tackle football when we were kids. It was a time of rules, but we had freedom and that is what I miss now as an adult.

I love that music can invoke these kind of feelings, and I decided that I had to find these men who performed on the record and inform them what their band meant to me.

It didn’t take too much research before I found the band and even a phone number. So I called.

For two hours, I told this gentleman how much I loved his music and when we spoke about the single they did, “The Crusher,” I was stunned when he told me his band didn’t do that song. He let me down easy. “Yeah, that was a wonderful song, however our band is based out of Texas. We are a different Novas band.”

Talk about slinking away, feeling like a complete idiot. “Don’t worry,” he assured. “It happens to us all the time.”

The Novas that was looking for were out of Minneapolis, Minnesota — fitting then that they would celebrate “The Crusher” Reggie Lisowski, the pride of Milwaukee. Those Novas did not have an online presence, but here’s what I learned.

They did perform their 1964 hit song live on April 28, 2007, at their induction to the Mid-America Hall of Fame, at the Medina Entertainment Center in Medina, Minnesota.

The lead singer of The Novas is Bob Nolan and he is one of the few vocalists I can say has a true bite to his sound. Maybe one day I’ll actually talk to him too, and I can gush for a couple of hours about why “The Crusher” rules.

There have been a lot of great dance songs written in the last hundred years. We’ve got “The Twist,” “The Locomotion,” “Twist and Shout” and if that wasn’t enough twisting we got “Let’s Twist Again.”

“The Crusher” by The Novas was written with the same feeling as all those great old dance songs — except if you tried these moves with your girl there’s a good chance you’d never see her again.

This song was written in 1964 as a tribute to wrestling great Reginald Lisowski AKA The Crusher. The lead singer of The Novas, Bob Nolan, does a great job of imitating The Crusher’s gravelly voice, calling on all “You Turkeynecks” to “Do the Hammer Lock” and “The Eye Gouge” because, after all “Everybody’s Doin’ It.” 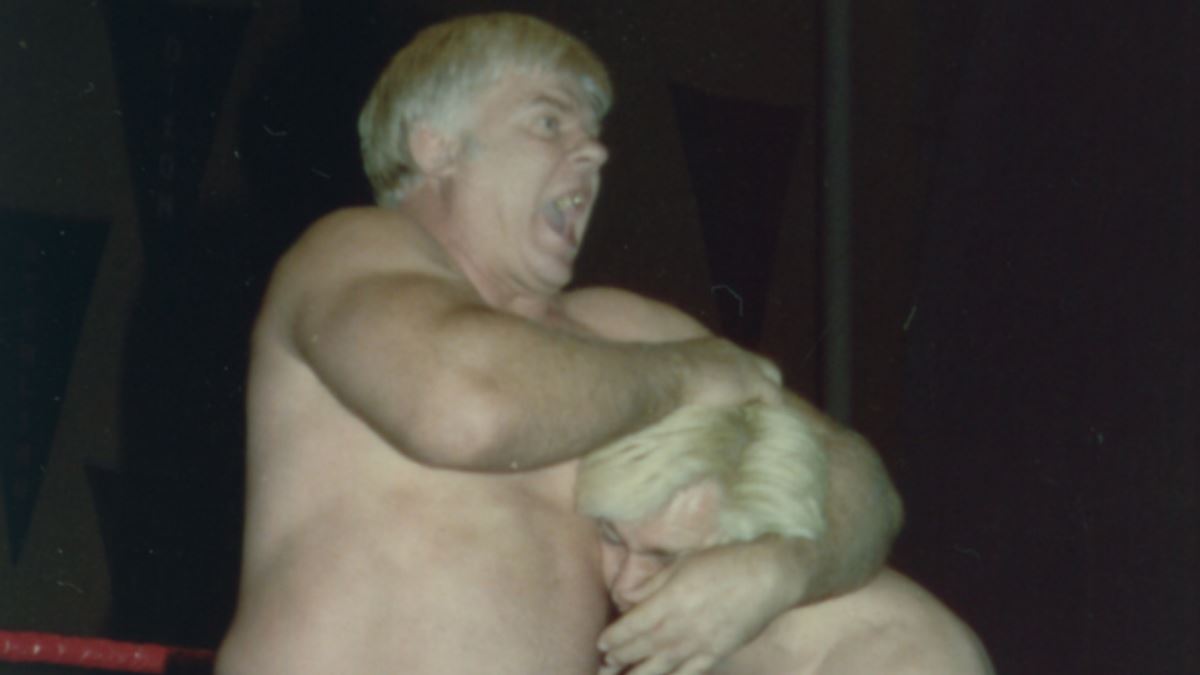 The Crusher at work. Photo by Terry Dart.

This is a novelty song. It’s not trying to compete with “Bohemian Rhapsody” or “Stairway to Heaven” for the greatest song of all time, although it will likely get stuck in your head for a while. David Letterman sometimes would play this on his late night show and that generated a renewed interest in the song.

The Ramones also recorded a song called “The Crusher” that was completely different. That song’s co-author, Dee Dee Ramone, released an ill-conceived rap album under the name Dee Dee King around that time so that’s probably why this song sounds the way it does. It’s a departure from the Punk Rock sound The Ramones are famous for and ventures into rap territory. The Ramones’ song tells the story of a wrestler who wants to take on the “Russian Bear” until he realizes how big the Russian Bear actually is. Our hero realizes that the Russian Bear will easily beat him to a pulp and he needs to get out of the mess he got himself into.

Crusher Lisowski is a Pro Wrestling Hall of Famer and has a statue in his honor in Milwaukee. The song is yet another way to honor him.

If you’re a fan of wrestling and fun silly music then do yourself a favor and look both tunes up, even if only one is about Lisowski. You’ll have to decide for yourself which one is better. Either way, they’re fun and you’ll likely wake up with a song in your head telling you to “Do the Hammer Lock” whether or not you know what a Hammer Lock is. Cheers!