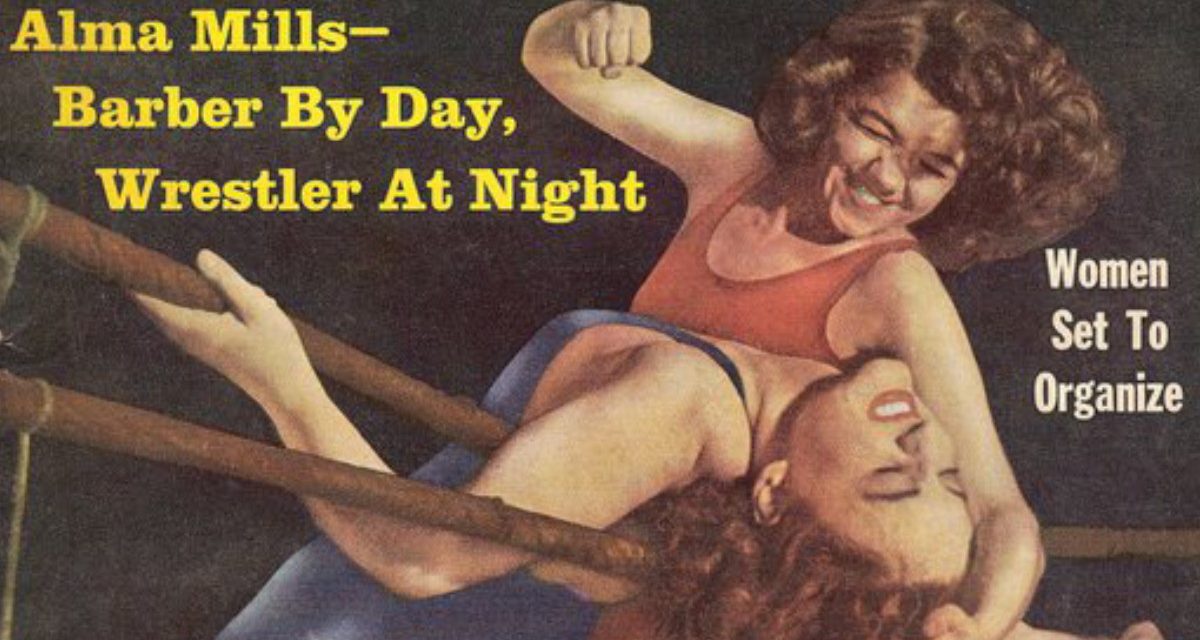 Meet the wrestler known as Alma Mills, a name she adopted through a family connection to long-established veterans Al and Tiny Mills.

As with anything in pro wrestling, it takes a little digging to get the facts, especially for someone who wrestled decades ago.

Thanks to some sleuthing by Chris Bergstrom, SlamWrestling.net can finally straighten some things out.

Alma Sophie Osbak was born on April 8, 1923, in Camrose, Alberta, to parents Edwin Mikal Osbak and Margaretha Christina (Dahlgren) Osbak. She was the fourth of eight children.

As the story goes, Alma Osbak was a truck driver in Alberta until deciding to try her hand as a woman wrestler. The family connection helped.

“I come from Alberta, Canada. My uncles were pro wrestlers, so I wanted to be one also,” Osbak is quoted as saying in a 1960s advertisement for Tony Santos’ wrestling school in Boston. However, the same pamphlet also claimed that Mills trained under Santos, but it was Al and Tiny that started her on the road. 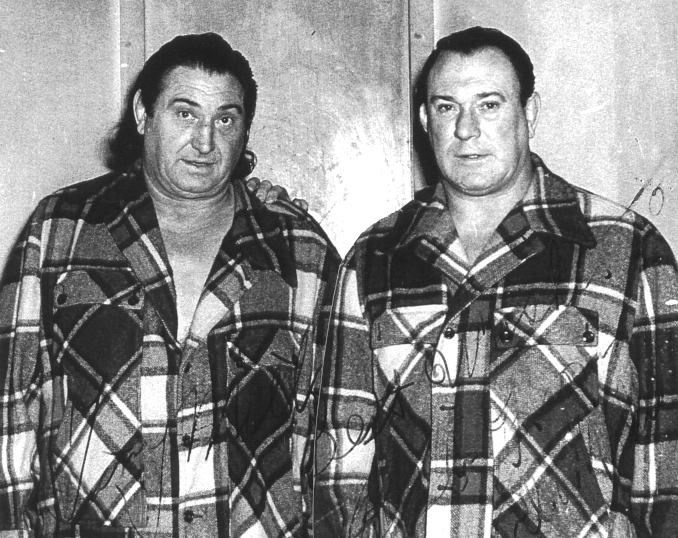 In a Ring Wrestling magazine profile in the February 1965 issue, Osbak talked about her training, which she claimed started when she was 16 years of age.

“My uncles did not go easy with me,” she said. “I suffered pain and anguish, but I never let out a complaint. I had learned that when you wrestle you take the pain with the glory and if you cannot stand anguish you had better not become involved.”

Most of the stories put her at 5-foot-9, 150 pounds. One newspaper noted that she was 6-foot, and “the tallest girl in wrestling.”

The connection to Santos is important later, though, as Alma settled in Boston, and, after going to barber college in 1959, ran a barbershop in Boston on Clarendon Street. She kept wrestling, primarily for Santos, and helped train the other women wrestlers at his school. 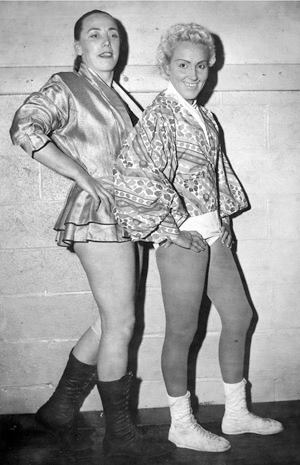 “I felt so pleased because we talked about stuff. She was a local,” said Martinez. “I taught her a lot of stuff, how to get heat, and different stuff like that. Her and I became friends. We communicated for quite a few years and then I lost her.”

In a interview in the Nov. 1999 issue of  the Whatever Happened To … newsletter, Ron Hill recalled Mills as Santos’ women’s champion:

“Oh, yeah. (laughs) She hated the guys. She wouldn’t put up with any swerves or anything. They’d kid her a lot and just joke with her, but she took everything seriously.”

A 1957 story about women wrestlers Alma Mills, Gypsy Tonya and Sherri Lee in the Montreal Gazette offers some tidbits of potential truths among the exaggerations … like, was Mills really pulling in $20,000-$25,000 a year?

“Somebody recently claimed a lady wrestler is like a strip teaser,” Mills complained to the writer, Bill Bantey. “I think it’s terrible to make the comparison. Why, if I had the guy who said it in front of me, I’d flatten him.”

She had a similar threat at home. “My boyfriend is a cop in Boston. He never mixes it up with me but if he did, I could clean up on him.” 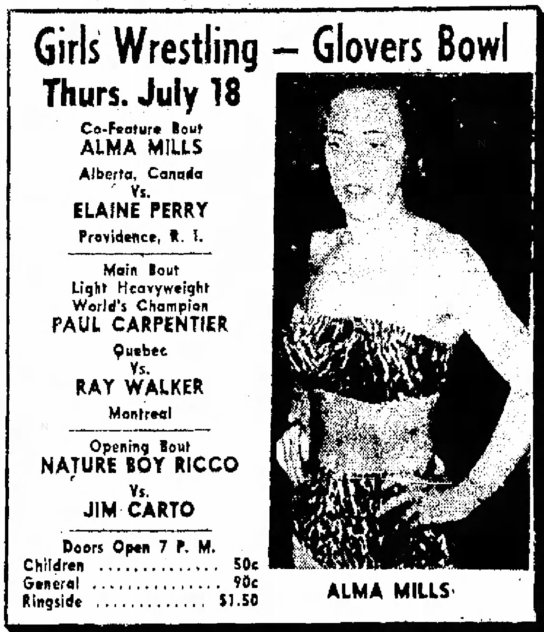 Noting that she had had her front teeth knocked out in a bout and wore big earrings to hide cauliflower ears, Bantey quoted Mills about her wrestling gear: “When I go in the ring, I’m completely covered except for my shoulders. I wear a reinforced bathing suit, undertights, leggings and shoes. That’s certainly more than a G-string.”

Mills also said that “Girls are rougher and faster than men.”

So, about that bear. 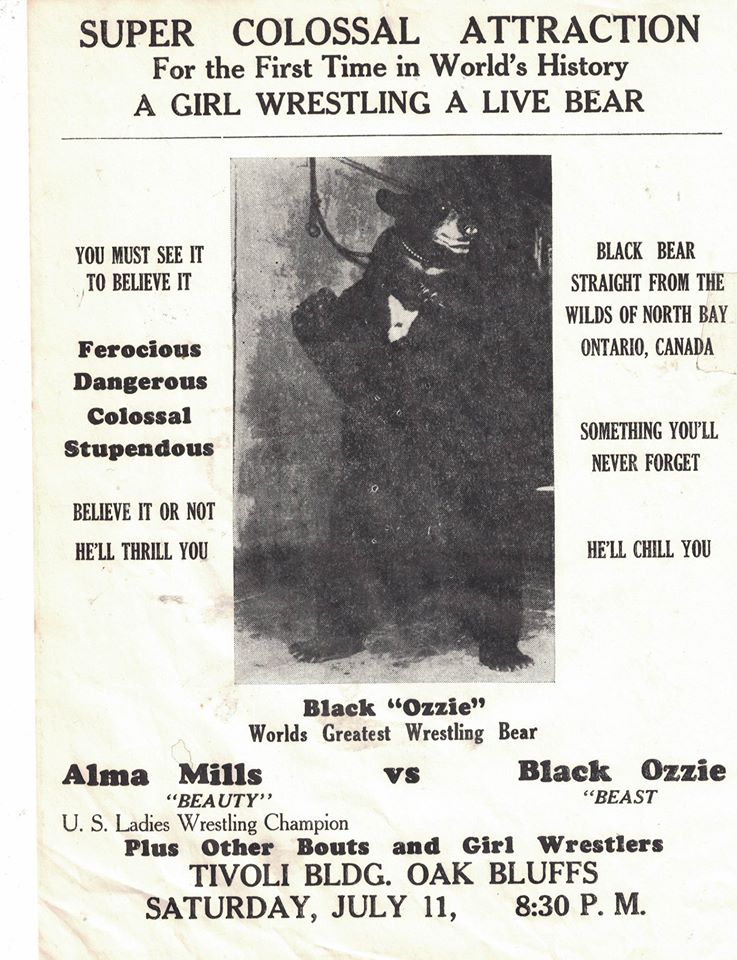 The Boston Globe‘s Neil Singelais wrote about the odd pairing in July 1959, but didn’t quote Mills.

“I purchased Black Ozzie from a trapper last December in the North Bay wilds of Ontario when she was only 18-months old and weighed 200 pounds,” Santos said. “The most difficult part was selling Alma the idea that the two of them in the ring together would be a great gate attraction.” 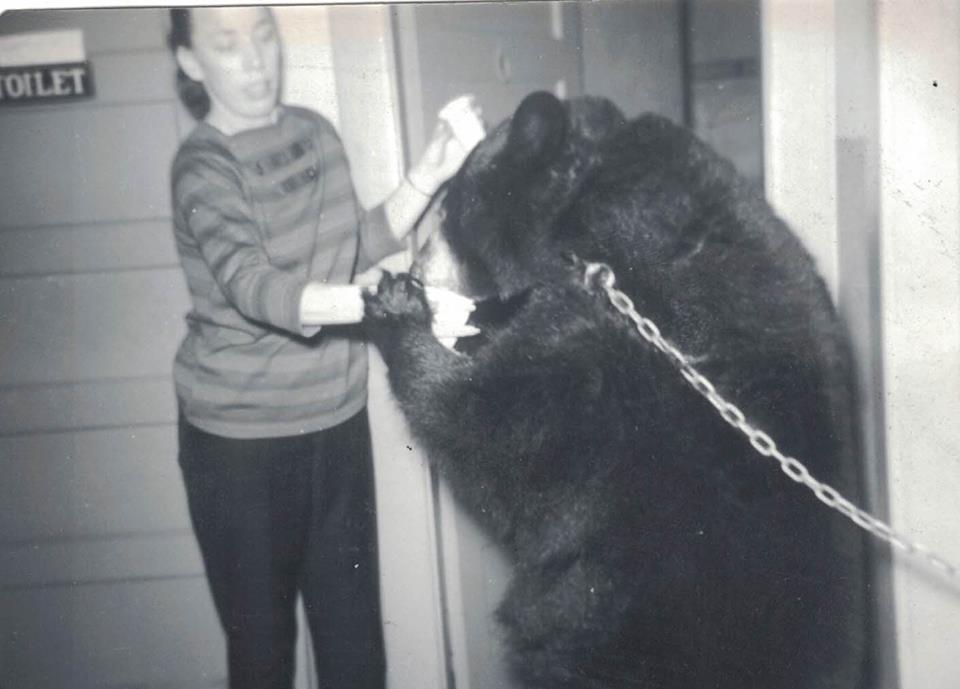 Mills and Black Ozzie first tangled earlier that summer of ’59, described by the Globe article:

Although Black Ozzie has been trained for her ring career, she likes to take an occasional and tentative bite. A head muzzle minimizes the hazards Miss Mills faces.

Santos says that the bear has become adjusted to her new way of life. “She doesn’t swat with her powerful paws at all,” he said, “but rather gently pushes with them.

“She’s a pretty good wrestler, too, she can apply a flying mare, leg dive, top body press or a monkey flip. Sometimes she throws Alma for a distance, but never hurts her.”

He explained Miss Mills’ objective against Black Ozzie is to try tipping the bear on her side. Alma hasn’t succeeded yet.

Singelais does conclude the piece with a great line: “Alma Mills — like every woman — dreams of getting her hands on a fur coat. But there must be an easier way than wrestling with Black Ozzie.”

The Globe also caught up with Mills in January 1969, writing about her work as a barber and an upholsterer.

Alma Mils of Boston is a big-boned girl with soft hands and a curious mind.

The soft hands she uses to cut men’s hair at her barber shop on Clarendon St. The big bones help her in her avocation — she is a professional lady wrestler. And the curious mind led her to take up upholstering at the center.

“I was just curious to learn how to upholster furniture,” Alma said. “This is my first course at the center and I really get a kick out of learning how to rebuild old chairs and things.”

The last years of the life of Mills aren’t as clear. At some point, she married a man whose last name was Oliver (no relation to this author … that we know of). Martinez said that Mills and Oliver were really in love, and that they moved to Hamilton, Ontario, at one point, and that was the last she knew. 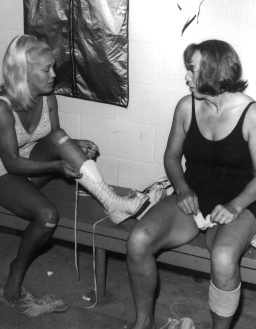 Beverly Shade and Alma Mills on a Bearman show in 1971.

Extrapolating the data from the Alma Mills career record compiled by David Creahin, that move to Ontario would have been in the early 1970s, and her last recorded matches were for “Bearman” Dave McKigney around the province.

— with files from Chris Bergstrom